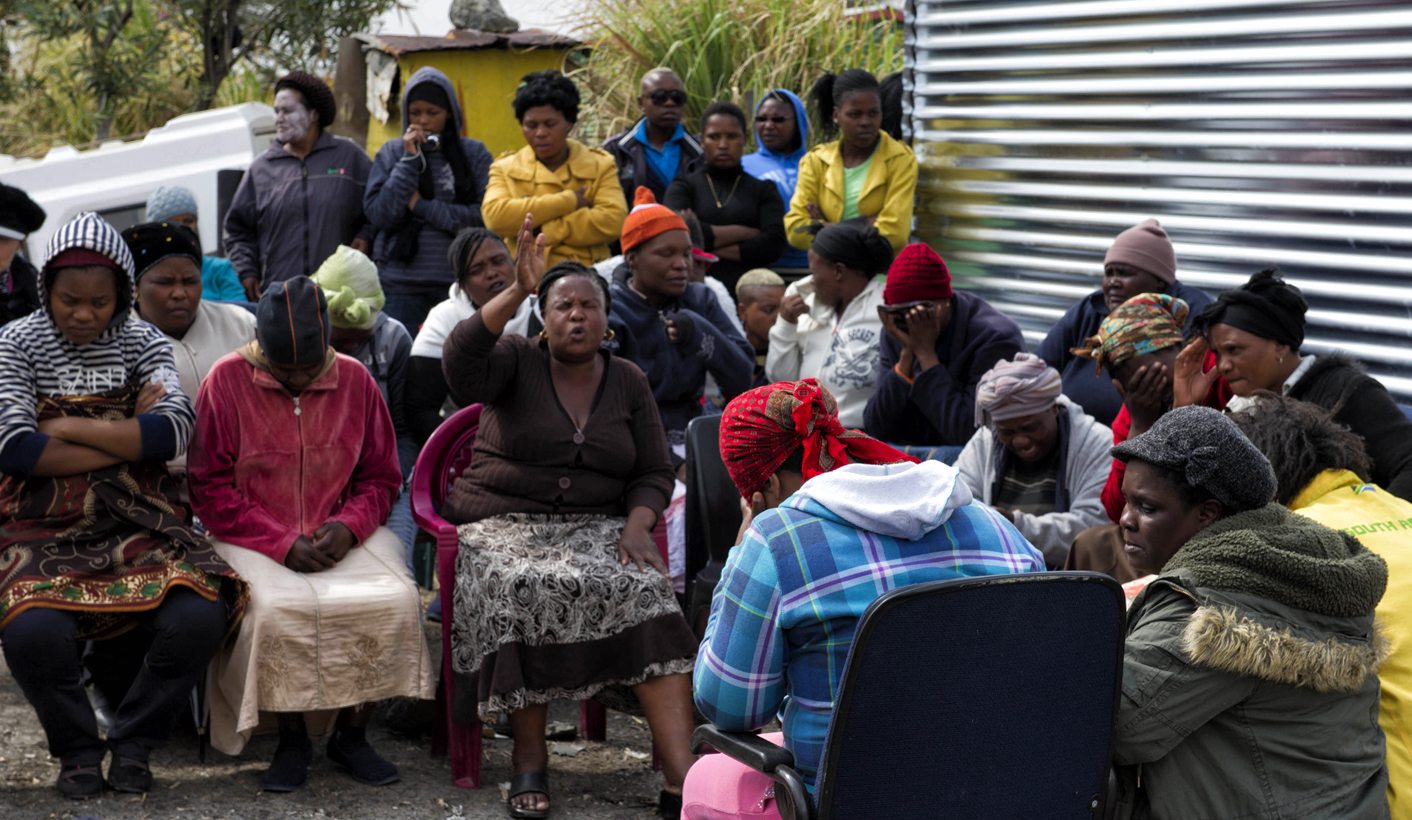 Marikana women’s group Sikhale Sonke has withdrawn from a mediation process with Lonmin that began after it lodged a complaint with World Bank investor, the International Finance Corporation. The group wanted Lonmin to commit to community challenges, like housing, water and sanitation, but says the company engaged in bad faith and failed to meet even basic commitments. By GREG NICOLSON.

Sikhale Sonke, a Marikana women’s group formed in the months after the 2012 massacre, on Monday accused platinum company Lonmin of engaging in bad faith during mediation discussions over the last 10 months and failing to address issues raised in a complaint related to Lonmin’s failure to meet its obligations in its Social and Labour Plan (SLP).

The group said it would try to hold Lonmin accountable through other avenues after it laid complaints more than 18 months ago and mediation efforts had broken down, Lonmin’s response leaving it with no other choice.

In June 2015, Sikhale Sonke laid a complaint with the compliance advisor of the International Finance Corporation (IFC), a World Bank investment body providing finance to the private sector in developing countries. In 2007, the IFC invested in Lonmin’s economic development programme, aimed at improving conditions in Marikana and meeting the company’s SLP. In the wake of the Marikana Massacre, when 44 people were killed in a week, Lonmin’s failure to meet its SLP obligations under the Mining Charter was exposed and the Farlam Commission of Inquiry cited the poor living conditions of workers and the community as a contributing cause.

“Lonmin’s failure to comply with the housing obligations under the Social and Labour Plans should be drawn to the attention of the department of mineral resources,” said the Marikana Report. Amnesty International recently released a report which said the company’s housing efforts were “fundamentally inconsistent” with human rights and Mining Charter obligations, before and after the massacre (Lonmin strenuously denied the Amnesty allegations). Other investigations have highlighted the extremely poor conditions in parts of Marikana, particularly Nkaneng, including health, environmental and safety concerns.

The South African government failed to work with and hold companies like Lonmin accountable on their SLP plans and Sikhale Sonke turned to the World Bank in the hope of improving conditions in the community. When it laid its complaint with the IFC, Sikhale Sonke’s lawyer from the Centre for Applied Legal Studies (CALS) said the international finance institution should have pushed Lonmin to enforce the plans it was funding but acted like an “absentee landlord”.

CALS attorney Palesa Madi on Tuesday explained there was a two-stage process to IFC complaints – voluntary mediation and compliance. The women of Sikhale Sonke decided to enter into mediation, hoping a resolution could be reached. Their core concerns were access to housing, water and sanitation, improving environmental management, gender empowerment, education, and black economic empowerment. Other issues arose, including counselling for community members affected by the massacre and establishing a scrap metal community programme. Since the June 2015 complaint, there have only been three meetings, the first in February 2016.

Madi, who has worked on the complaint from the beginning and attended each meeting, said Lonmin only wanted to discuss the minor issues, such as counselling and recycling. “It seemed like they only wanted to discuss the softer issues, not that those aren’t important, but they didn’t want to discuss the core issues.” On issues like housing, water, sanitation, even erecting a monument at the koppie where the massacre took place, Madi said Lonmin repeatedly said they could not discuss them without other stakeholders, such as government departments or the local traditional authority, present. When Sikhale Sonke suggested they hold meetings with the necessary stakeholders, Lonmin declined. “They were not even willing to invite these other parties,” said Madi.

“I was in awe half the time that the women were so respectful of people who haven’t done what they said they would in the community,” Madi added. Sikhale Sonke was willing to talk about peripheral issues to gauge Lonmin’s seriousness. They decided Lonmin was not committed to engagement, even on the most basic issues, and on Monday notified the IFC of Sikhale Sonke’s withdrawal from voluntary mediation.

“We have seen that it’s a waste of time and we have seen that Lonmin don’t want to do anything for the community. What they promise today, tomorrow they don’t know it,” said Sikhale Sonke chairperson Thumeka Magwangqana. She said the meetings were amicable but failed to lead to any progress. “After four years of the massacre, we thought that Nkaneng would be a formal settlement, but they said they can’t formalise Nkaneng… We thought that by sitting down with Lonmin there would be a change, but there is no change,” said Magwangqana.

Lonmin was not reachable for comment on Tuesday afternoon, but when the Sikhale Sonke complaint was laid the company told Financial Times, “We accept that our social performance in the past has not always been what was hoped.” It continued, “The company has learnt from the tragic events of Marikana, recognises the structural changes in the mining industry and is committed to working with its stakeholders to bring about real change and transformation.”

CALS attorney Nomonde Nyembe explained that Sikhale Sonke’s withdrawal from mediation means the World Bank’s IFC compliance advisor must now investigate complaints that Lonmin failed to implement the SLP objectives it was financed for and whether the IFC failed to follow its own compliance guidelines and monitor the project. The investigation will focus on the IFC’s side of what happened but could have implications for Lonmin’s reputation and send a message to other South African companies in deals with finance institutions.

Photo: Nkaneng, Marikana, North West. South Africa. Police had running battles with residents of Nkaneng shantytown after the police disarmed about 100 miners a day after Lonmon offerred striking miners a R960 increase. Burning and rock barricades were then set up in the township and police shot at, teargassed and also arrested some 14 residents. many of the injured were women. (Photo Branko Brkic/Daily Maverick)