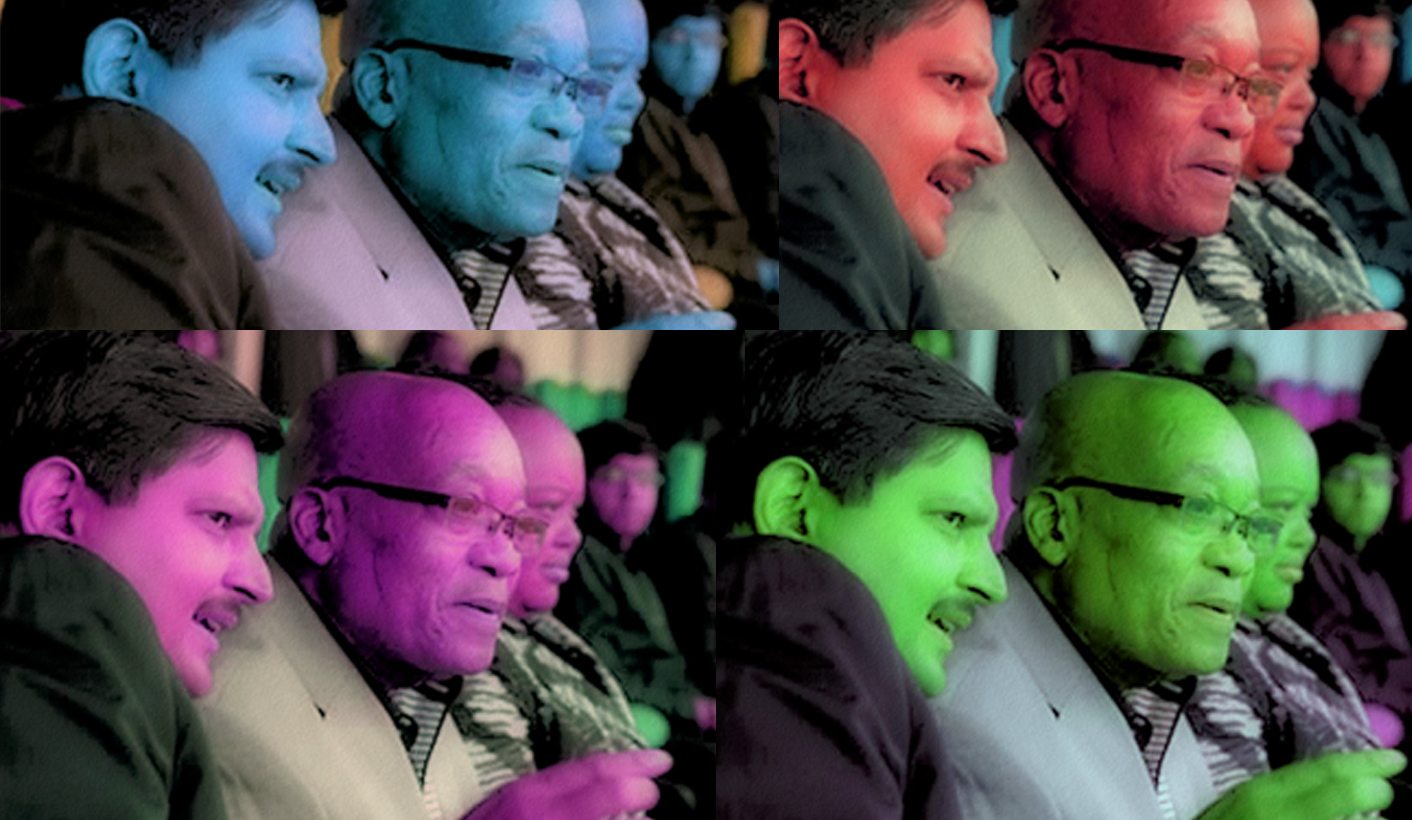 Two matters of pressing national concern were thrashed out by the time a sweltering South African Thursday dawned in all its climate-change glory. The first was that Finance Minister Pravin Gordhan’s mid-term budget served both as a salve and as a poison pill – while the wonks described it as “sober”, the students, lefties and, frankly, anyone not working for Moody’s regarded it with differing degrees of circumspection. The second concern, as explosively detailed in these pages by Marianne Thamm, was that the charges laid against Minister Gordhan by the National Prosecuting Authority were clearly politically motivated. As we stumble into next week’s horror show – when pretty much everyone in government makes an appearance in a courtroom – perhaps it’s worth summing up the madness. By RICHARD POPLAK.

On Thursday morning, following a somewhat interesting week, the Gupta-owned The New Age paper held its monthly Breakfast Business Briefing, which was convened within the tony Cedarwoods of Sandton. At the ungodly hour of 06:30, and for the ungodly sum of R892 (incl. VAT), a rapt audience was treated to an extended disquisition by the SABC’s Hlaudi Motsoeneng, his acting CEO, James Aguna, political performance artist, Andile Mngxitama, and a bunch of bonus guests.

They were there to discuss a phenomenon called “state capture”.

Welcome to occupied Azania during the Age of the Fallists, where “state capture” serves as an endlessly mutable neologism employed to describe the machinations of a patronage system. The gentlemen attending the TNA Breakfast Business Briefing, their eggs sweating polyunsaturated goop, their bodies melting with over-prescribed lipostats, were trying to do what everyone does in a time of self-reinforcing non-fact-based infotainment: reduce “state capture” to a series of pithy hashtags, in turn circulated by trolls/supporters, all in hope of achieving a critical mass of truthiness.

A guy like Vladimir Putin understands that trolls form the front lines of any postmodern system of domination, which is a fact that the Guptas and their media flunkies certainly grasp. But they generally look like idiots in this regard because a) they’re idiots in this regard, and b) South Africans are neither as drunk nor as credulous as the Russians. Oh sure, the Guptas troll a little on Twitter and suck a fortune of government ad spend into their media Death Star. (There is also Mngxitama’s electronic soapbox, which is called “Black Opinion” – or, more accurately, “Seven Blacks and their White Lawyer’s Opinion”.) But the whole operation is so obvious in its design, and so unsubtle in its messaging, that it just adds to the dog poop that we squelch through on the road to a downgrade.

The State Capture breakfast was designed to shovel heaping dollops of one particular menu item into our collective gobs: Pravin Gordhan and a faction of captured ANC liberals, all of whom are in thrall to jowly white men with lots of money, are trying to wrest the state from the hands of the president, whose attempts at introducing a ramped up “radical economic transformation” agenda have been met with resistance – because regime change.

As with all enjoyable nuggets of propaganda, there are elements of truth to the story. The business leaders and CEOs who have routinely lobbied Gordhan and his predecessors come from an entrenched financial establishment, and ANC stalwarts like Cyril Ramaphosa have benefited massively from such connections. But it isn’t malevolence, greed or even white people that keeps Gordhan from reinventing South Africa’s fiscal reality – it’s an utter lack of economic imagination, a longstanding ANC love affair with neoliberalism, and zero leadership from the top.

If you’re interested in the specifics of Gordhan’s speech, know that your diligence puts you at odds with Number One, who took the whole affair as an opportunity to catch up on nap time. The scale of this insult? The president of the republic snoozed through one of the most important engagements between the people and their representatives, which is in itself a fire-able offence. This is how gerontocracies work: leaders nap their way through the tough stuff.

The distant thump of stun grenades and rubber bullets might have roused him, but a man with no conscience sleeps as sound as a babe. The Fees Must Fall movement gathered in their hundreds outside Parliament, just as they did last year, and just as they will next year. It was a nice touch for the finance minister to physically reach out to this group in order to accept a memorandum – it was an act that smacked of genuine leadership. But it did nothing to quell the inevitable mayhem.

The violence that has spilled out of our universities onto our streets, most of it attributed to the “student protests”, is more accurately described as straight-up civil unrest. (Trust me when I say that it’s impossible for an on-the-ground reporter to distinguish between card-carrying students and street youth/end-of-days nutjobs/agents provocateurs.) The movement frays as it leaves campus, subject to a rage and a nihilism that its leaders can’t control. Indeed, with big name students picked off in what has resembled an extra-judicial dragnet, it’s difficult to know what the FMF movement can control: this administration will not fund free education for all tertiary students, and it will be years before this bunch cobbles a feasible plan together.

And as important as those issues may be, there are distractions: next week, the old men will start filing their way into courtrooms across the country. Before the end of her tenure, Thuli Madonsela, the previous public protector, famously tried to shove through a state capture report, which apparently stars the Guptas, the Zumas, and a bunch of their acting closest friends. But Zuma and his team of lawyers have stymied the release of the document, asking for more time to respond to the applications. The case was scheduled to be heard in the Pretoria High Court on November 1. Given Zuma’s dilatory expertise, it won’t be. Meanwhile, the report is under lockdown, and the fallout of its potential release is watched with keen disinterest by the new Public Protector, Busisiwe Mkhwebane. The Busmeister grooves to Gupta TV in her new Pretoria offices, zoning out to an alternative reality in which the state capture report exists, but as an indictment of Madonsela’s captured-ness, and where state capture exists as the inverse of the information probably contained in the state capture report. Jump cut to the TNA breakfast, broadcast of Gupta TV, and the truthiness feedback loop closes.

Gordhan, of course, is set to make his own visit to the court on November 2, in order to defend himself against charges from Shaun Abrahams and his National Prosecution Authority that he acted unlawfully in approving a pension for a former SARS director. But on Thursday, a big dump of data hit the net, all of which suggested that a SARS lawyer named Vlok Symington was held hostage by bouncers acting under the orders of the Hawks and SARS commissioner Tom Moyane, until he signed an affidavit that would have implicated Gordhan in fraudulent activity. A bad interpretive dance of a Sopranos episode, and behind it, the hidden hand of the Guptas.

Ah, but calling the Gupta family and their minions a “faction” is like describing tinned spaghetti as a “cuisine” – they are a criminal syndicate attached leech-like to President Zuma, his state security cluster, and a number of other ANC hacks who owe the Guptas their lifestyles. Paranoia, subterfuge, men with guns: suddenly, it’s all gotten so serious. The Blesser in Chief has doubled his VIP protection detail – the same mouth-breathers that two years ago would barely give journalists a second glance, but this year found it necessary to butt me in the gut with an R4 during the ANC election manifesto launch in Pietermaritzburg. If the president’s protection racket have intercepted threats on the big man’s life, it’s news to the rest of us: our representatives are treated with a politeness that borders on the servile, the odd boo-bird notwithstanding.

The favour isn’t returned. This is the country in which glass pitchers and drinking glasses have now been banned from the Nelson Mandela Bay legislature, because the ANC councillors used them as weapons against the Democratic Alliance and Economic Freedom Fighters. Why? Because when you’re told that you’ll rule until Jesus comes, and suddenly find yourself out of power and Jesus-less – well, why not stab the chief whip in the shoulder?

This is where we are, Azanians: at an eternal Gupta-convened state capture breakfast, where the good guys are the bad guys, and the bad guys are handing out trays of Eggs Benedict. The cost of going down the rabbit hole with the carnival barkers and the loonies? A mere R892 (incl. VAT). Totally worth it, considering it’s unlikely that any of us will survive such madness with our insanity intact. DM

Original photo of Atul Gupta and President Jacob Zuma by the GCIS.