MTBPS: Gordhan steps into the breach with extra R17 bil...

MTBPS: Gordhan steps into the breach with extra R17 billion for poor students 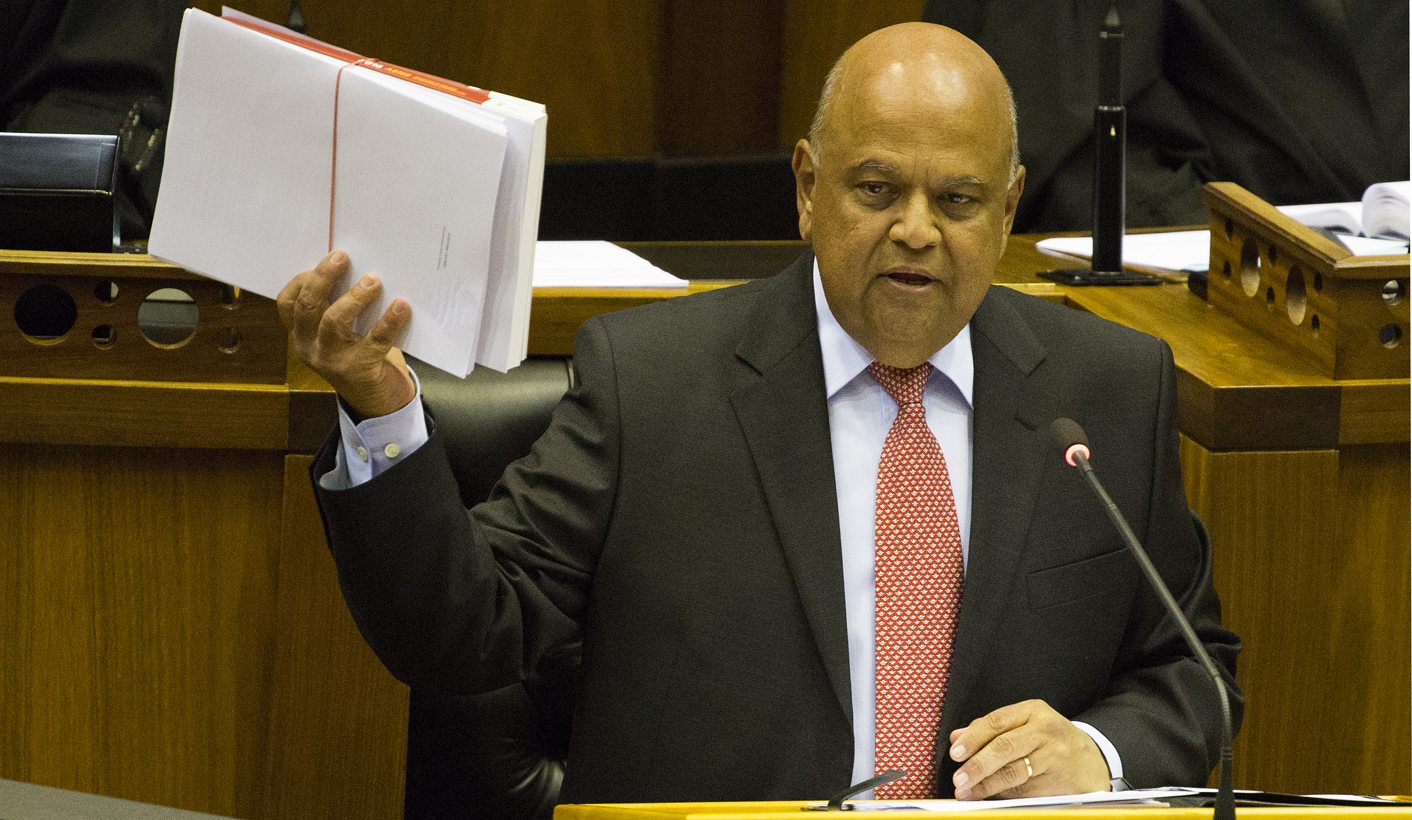 Even those who might normally want to criticise Gordhan for being conservative regarding expenditure or even “neoliberal” were hoping he would be able to pull a rabbit out of the hat despite the dire economic situation as he presented his Mid-Term Budget Policy Statement in Parliament on Wednesday afternoon. By JUDITH FEBRUARY.

The heat was on in Cape Town on Wednesday both literally and figuratively.

As the city experienced its first proper summer’s day, student protesters started marching towards Parliament hours before Minister of Finance Pravin Gordhan’s medium term budget policy statement (MTBPS). They had come to make their presence felt in a powerful way and also to hear whether their demands for free higher education would be met.

It was precisely this time last year that students first marched to Parliament as part of the broader #FeesMustFall campaign. Then they made their way inside the parliamentary precinct by simply walking through the gates.

State Security Minister David Mahlobo was going to make no such mistake this year. The roads around Parliament were barricaded several hours before Gordhan’s speech and razor wire was used to secure the parliamentary precinct. We don’t call it “the People’s Parliament” any more – and for good reason.

The problem of course is that in a democracy the people’s voices cannot be silenced by barbed wire and blockades. Later, protesters were able to reach the outside of Parliament, however.

Last year, Higher Education Minister Blade Nzimande could not muster the courage to speak to students, cutting a lonely figure with his faulty loudhailer. It seemed almost symbolic of the Zuma government and how out of touch it is with its core constituents. Then, as students waited for someone in authority to hear them, Cabinet ministers were seen departing via the back exit of Parliament.

But today something completely different happened. It was called leadership. As the crowd swelled outside, Gordhan, flanked by his deputy, Mcebisi Jonas, and other Treasury officials, walked outside to address protesters personally and accept their memorandum.

It was a politically astute move by someone principled enough to care and understand the gravity of the political moment. In one simple move Gordhan showed up the politically bankruptcy of President Zuma. For Gordhan’s was an almost presidential act. He was going to listen, though hearing and listening would need to happen against the backdrop of limited resources and competing priorities. Whatever pressure he was under, Gordhan seemed buoyed by his colleagues’ support and also that of business and civil society increasingly frustrated by allegations of state capture and corruption.

Unfortunately, once Gordhan had commenced his speech, clashes broke out between police and smaller groups of protesters who were still on the streets surrounding Parliament.

The past few weeks have been nothing short of dramatic as Gordhan came to Parliament facing criminal charges and has himself released some damning information regarding the Gupta family’s clutch of seemingly dodgy banking transactions which run to nearly R7 billion. In addition, former Public Protector Thuli Madonsela’s unreleased “state capture” report has provided grist to the mill for those who believe that Gordhan and the National Treasury are being targeted as they remain the bulwark against the state being completely captured by President Jacob Zuma and his band of corrupt cronies.

Questions have been swirling about whether Gordhan will retain his position while ratings agencies themselves question South Africa’s ability to rein in spending, stop waste and corruption and ensure the elusive “inclusive growth” so often spoken of.

Predictably then, this year’s MTBPS took on a rather more political flavour than any other since 1994. Usually they are routine events, technical in nature, with a bit of adjustment here and there. South Africa is generally lauded for its budget transparency and also for this MTBPS process that puts proper planning at the heart of government.

Wednesday felt different. Even those who might normally want to criticise Gordhan for being conservative regarding expenditure or even “neoliberal” were hoping he would be able to pull a rabbit out of the hat despite the dire economic situation. A poor showing would of course risk the downgrade and perhaps provide the president with a reason to fire Gordhan?

Wednesday was therefore about Gordhan satisfying those with a range of competing interests but also about the fabric of our constitutional democracy and the ability of those who lead our democratic institutions to absorb the pressure of the political moment. Because all our fault lines were on display – ratings agencies circling, students on the march, a president increasingly wounded and unclear of the support of his own party, both inside and outside of Parliament, and Gordhan and his National Treasury team under pressure from all sides.

At the end of the day, however, Gordhan had several hard choices to make as he started his speech by describing our broken social contract and our inability to act in the national interest. This speech almost didn’t feel like one about the economy, given the number of times Gordhan mentioned the importance of the rule of law as well as the ability of the state to act collectively. In fact, the allusions came raining down graphically as he quoted the apt Pedi proverb, “Lions that fail to work as a team will fail to bring down even a limping buffalo.”

Pointedly, Gordhan talked about our ability to shoot ourselves in the foot and the need for the government to adhere to the 9-point plan (yes, Mr President, that one) and the often-forgotten National Development Plan (NDP).

The economy, as Gordhan said, is “in difficulty”, but not in decline, however. The tough choices were informed by lower tax revenue collection than expected, sluggish growth and the need to allocate greater funding to Higher Education, which was injected with further R17.6 billion over three years to subsidise poor students. This is over and above the additional R16-billion additional funding allocated in February. Of course, the devil is always in the detail and the efficiency of NSFAS itself to provide the service to students. Even given the additional funding, there will doubtless be a shortfall. Will what Gordhan said be enough to satisfy student demands despite his willingness to listen?

Budgets are all about trade-offs. As Gordhan himself said, expenditure has to be cut but not so drastically as to kill off the “green shoots” in the economy – always a tricky balancing act and even more so in South Africa, a country with its unsustainable levels of inequality.

The objective economic conditions would also require that government tighten its belt and cut down on waste and corruption. We have heard these words before and Gordhan will need to rely on the president himself to ensure that his colleagues understand the import of this message.

The other rather unwelcome message is that low growth at a projection of 0.5% down from February’s projected 0.9% and a R23-billion revenue shortfall will mean an increase in taxes in 2017-2018, above the R15-billion announced in February 2016. The detail of that is unstated for now and will be revealed in February 2017. The options going forward do not seem all that attractive, however; increase personal tax, corporate tax or VAT?

On the controversial nuclear deal, Gordhan stated that “further expansion of electricity generation capacity will be guided by the Integrated Resource Plan and the Integrated Energy Plan”. Eskom would take the lead in the nuclear power initiative but work closely with National Treasury to ensure the programme is in the best interests of the country. Given how utterly secretive the entire nuclear procurement process has been thus far, Gordhan issued a timely reminder that procurement should happen in terms of s217 of the Constitution and be “transparent”. He went on to add, however, that, “Our approach to energy security and to meeting climate change commitments also includes a substantial renewable energy programme. Contrary to the views of some, these are sound and sensible long-term investments.”

It was a sharp reminder of the politics of state-owned enterprises and spending priorities. Recently Eskom had taken a decision to minimise independent power producers. “Lions that fail to work as a team will fail to bring down even a limping buffalo,” Gordhan seemed to be saying yet again.

As he ended his speech to a standing ovation, Gordhan more than anyone knew that his would be an uphill battle against the rent-seekers and those who would use the state for their private gain. It was a pragmatic speech with little in the way of dramatic intervention. Gordhan would have hoped that he had done enough to satisfy the myriad South African stakeholders and ratings agencies too.

Meanwhile, outside Parliament, police were in a stand-off with groups of student protesters who were burning bins and smashing windows. Stun grenades had been fired earlier as Gordhan called for an end to violent protests inside the National Assembly.

And so ended just another day of contradiction in South Africa. DM