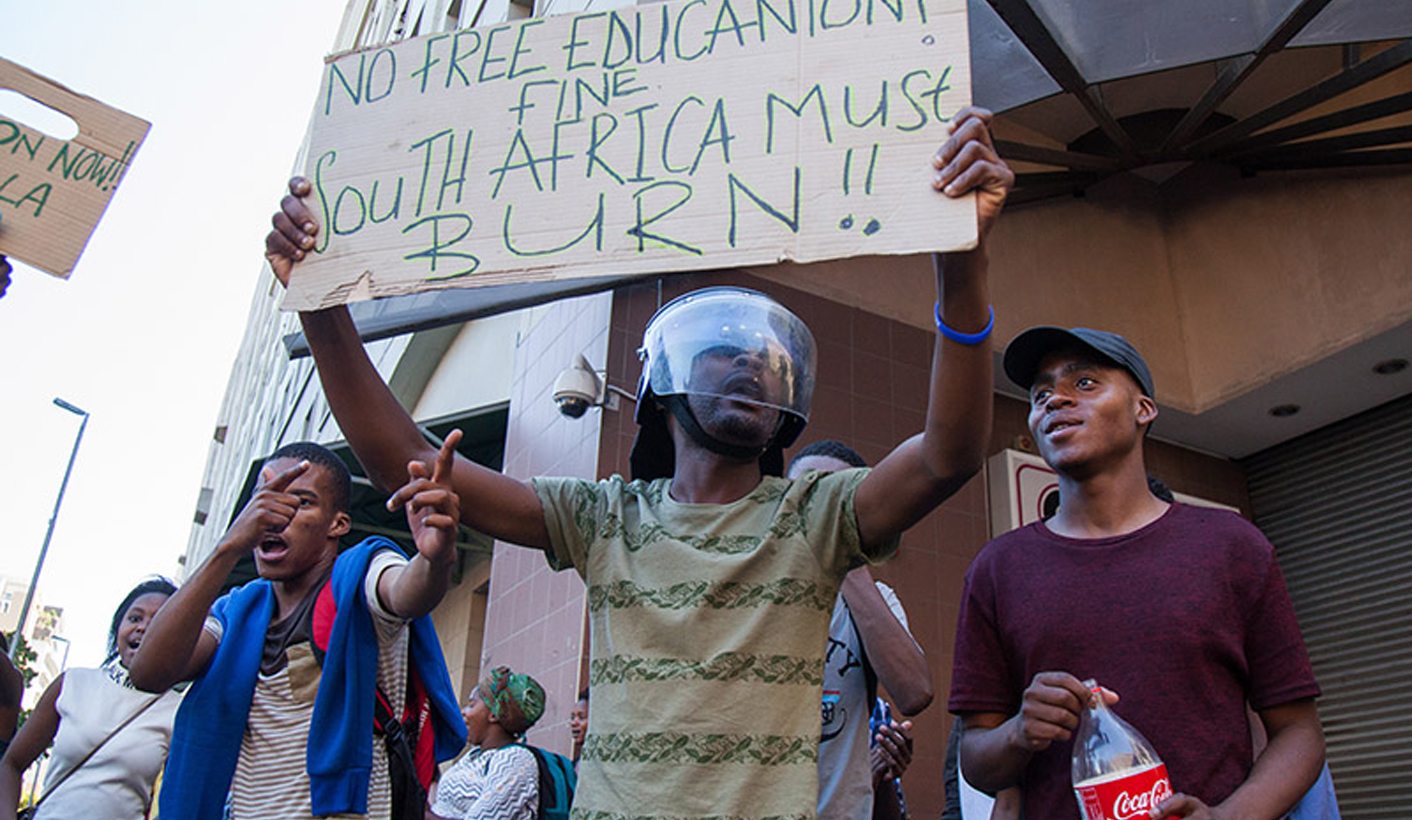 Violence broke out just before a march by protesting students to Parliament was about to end on Wednesday. By Ashleigh Furlong for GROUNDUP.

Several thousand students marched through the Cape Town CBD on Wednesday to demand “free decolonised education”. Just as the march was set to end and disperse, violence broke out, bringing chaos to the Cape Town CBD.

Earlier the Minister of Finance, Pravin Gordhan, had heard and signed the students’ memo, before announcing in his budget speech to Parliament that an additional R17-billion would be made available to tertiary institutions over the next three years. R9-billion of this is for the “National Student Financial Aid Scheme over the period ahead, raising its funding by over 18% a year”. And over R8-billion is “to meet the costs of fee increases for students from households with incomes up to R600,000”.

Protesters carry a ‘coffin’ for Blade Nzimande. This was burnt and thrown at police. Photo: Ashraf Hendricks

The trigger for the violence was a symbolic cardboard coffin with a picture of Minister of Higher Education and Training, Blade Nzimande, attached to it. After speeches by students outside Parliament came to an end, protesters set the “coffin” alight and then hurled it towards the police. The heavily armed police responded with stun grenades, causing the students to scatter. The police then moved towards the students, some of whom threw rocks at the police who were detonating stun grenades.

The protesters then sprinted away from the advancing public order police, with many headed toward the Cape Town station. The police appeared to be the students’ main target, with multiple police vans being attacked with stones. Despite this, rocks were also hurled at bystanders looking through windows as well as cars trying to escape the protesters. Some students who were running from the police shouted at their fellow students to stop throwing these stones. We estimate that only about 100 protesters participated in the violence.

Shops throughout the CBD quickly shut their doors, but some not soon enough, as GroundUp has received an unconfirmed report  that a Clicks store in the Golden Acre was looted, and a confirmed report that a Truworths store in Adderley Street was looted.

We witnessed damage to a bus that was stoned, as well as a McDonald’s restaurant outside the train station.

While police trawled through the city attempting to disperse protesters with stun grenades and rubber bullets, students responded by attempting to block roads with burning rubbish.

After about two hours of mayhem, the situation appeared to calm down, leaving the streets strewn with the aftermath of the protests.

The students had received permission to march and marshals were appointed to lead the group to Parliament.

The march to Parliament struck a chord with many students, as a number of them told GroundUp that they had not previously been involved in the student protests but that today they were joining in.

A UCT student told GroundUp that she had previously only attended one student meeting but that she was joining in today because they were “going to the right place”.

“It’s not about the university, we are going to politicians [today],” she said.

A Unisa student, whose university has been relatively untouched by student protests, said that he had joined in on protests at CPUT and UWC’s campuses earlier this year.

“The question of free education is a social question,” he said. He also said that many people in the country don’t have the necessary skills to secure work. He said that billions of rand had been spent on things such as the Soccer World Cup, instead of on free education.

Before the students left for the march, UWC student leader Monde Nonape said to the crowd that they “had a date with the state” today. “The land belongs to black people and all the resources under the land,” he said.

Around midday the march began and attempted to head down Keizersgracht Street but was stopped by riot police who wanted the students to form a line of marshals in the front to keep the group together. This proved futile as students began to move towards Parliament as a large mass.

The front line of protesters then practically sprinted to Parliament, with some students climbing onto moving police vans. After arriving outside Parliament, Gordhan listened to the students’ memorandum and then went inside to present his medium term budget policy statement.

Photo: As the situation heated up, this man pulled out a firearm. (Ashraf Hendricks)

The students’ memorandum said that they wanted Nzimande to fund free “Afrocentric education”, and the scrapping of all historical debt dating back to 1992. The statement said that debt “is one of the key challenges hindering black graduates from making a meaningful impact on the economy and improving the lives of their families. The students also called for an end to outsourcing, a demilitarisation of campuses and the return of all expelled, interdicted, suspended dismissed, financially and or academically excluded students.

A student addressing the crowd said that the universities would remain shutdown until they received free education. Currently UCT, UWC and CPUT are to various degrees shut down.

CPUT student leader Lukhanyo Vangqa said that “they have not created a bullet that can kill a revolution”. To universities that were not open for poor people he said, “let it burn”.

“Only the shattering sound of a breaking window makes them sit up and listen,” said Vangqa.

A “concerned parent” addressed the crowd, saying that he never imagined that in “this day and age” students would be “criminalised for fighting for what is rightfully theirs” and that by sending your child to university you were “actually sending them to prison”.

He said that his message to the parents in “blue helmets”, referring to the police, was that they should question their own integrity as the system was also oppressing them. “Get home and look your own child in the eye and say today I shot someone else’s child,” he said.

It is unclear at this stage if any students were arrested in the violence that ensued following the conclusion of the speeches outside Parliament. DM

Main photo: Thousands of students from across Cape Town participated in Wednesday’s march to Parliament. Photos by Ashraf Hendricks