NPA vs Gordhan: Fatal disregard of law will make case go down in history 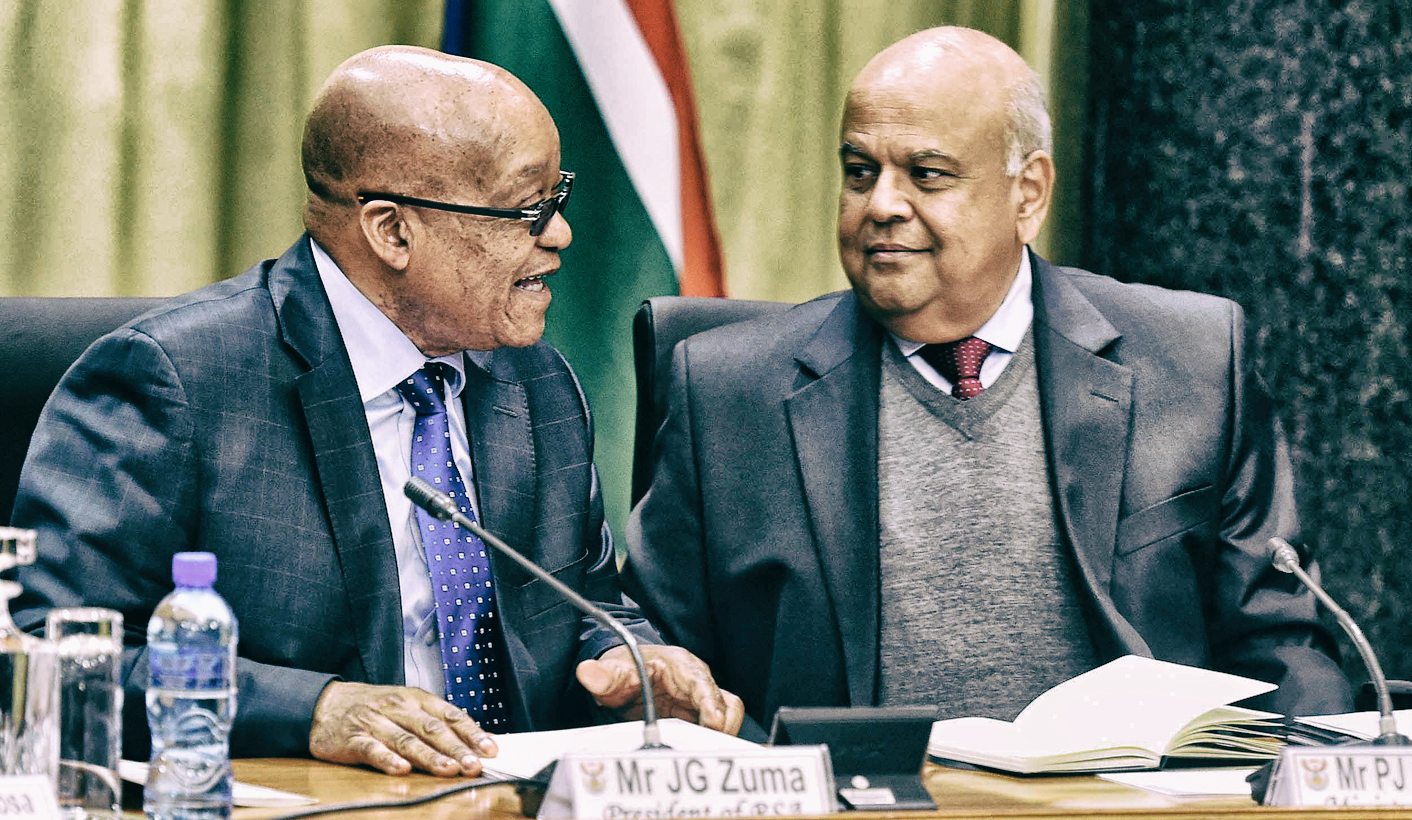 In the past it often fell to NGOs to protect the rights of activists hounded by a rogue state. It is vaguely horrifying, then, that we find ourselves at a point in post-apartheid history when two NGOS would need to apply to a court to protect the rights of a sitting Finance Minister of a democratically elected government, next-level down the rabbit hole stuff. And the documents that have shot between the offices of the Hawks, the NPA, Treasury, law firms and the NGOs since February this year will preserve the crisis and reveal its extent to future historians. By MARIANNE THAMM.

As time passes, it is the record of events as they unfolded in the public arena of a court of law which later surfaces, offering a society the close and often chilling brush with history in the words contained and preserved in charge sheets, affidavits and speeches from the dock.

Future South Africans hoping to understand this year – this 2016 of living dangerously madly – will not, unfortunately, find the eloquence and the poetry of, say, Nelson Mandela’s famous April 24, 1964 “I am prepared to die” speech. There is nothing of the kind in the files of correspondence that this year shot between the Hawks, the NPA, the Treasury, several “suspects” (Minister of Finance Pravin Gordhan, former acting SARS commissioner Ivan Pillay and Commissioner Oupa Magashula) and the various NGOs that sought to intervene.

In one letter dated 21 October 2016 – in reply to a communication by lawyers representing the Helen Suzman Foundation (HSF) and Freedom Under Law (FUL), requesting NPA head Shaun Abrahams to review the charges of fraud and theft the NPA had announced it was bringing against Gordhan et al – Abrahams replies:

“I take umbrage at the malicious and unfounded assertions concerning my ability to exercise my responsibilities independently and objectively. The less said about this at this stage, the better.”

At the time, Abrahams perhaps reckoned that news of his meeting at ANC headquarters at Luthuli House, on the Monday before he announced that the country’s Minister of Finance would be charged, might not find its way into the public realm.

Abrahams, it turns out, visited Luthuli house “at the invitation of the Minster of Justice Michael Masutha” and ended up meeting with President Jacob Zuma (who hangs around Luthuli House on a Monday anyway) as well as Minister of State Security David Mahlobo and Minister of Social Development Bathabile Dlamini (who should actually be attending to the soon-to-expire, unconstitutional tender to distribute SASSA grants, which will affect the lives of over 17 million people – but that is a saga for another day) to discuss other pressing matters. These being “the fast generating security situation taking place on our campuses” as well as the proposed new law on hate speech.

The day after the visit (as President Zuma was winging his way in a chartered jet to Kenya), Abrahams called his press conference to announce that he was charging Gordhan, Pillay and Magashula on charges relating to a pension payout to Pillay.

On Monday, Masutha told media that he had indeed invited Abrahams to the meeting with Zuma, adding nonchalantly, “Did I think about the venue? I just thought the National Director of Public Prosecutions has the liberty to enter any building and to attend a meeting, as long as that meeting is not illegal.”

He added that he thought what mattered was: “Was it an ANC party political meeting or not? The answer is no.”

Asked by eNCA’s Karyn Maughan why, if the meeting was about #FeesMustFall, Minister of Higher Education Blade Nzimande had not attended, Masutha replied, “I do not know the circumstances.”

On Sunday October 23, the HSF and FUL applied to the Pretoria High Court for an urgent application “to review, set aside and declare unlawful charges which have been brought against Minister of Finance Pravin Gordhan MP”. This after several letters to the NPA by both NGOs requesting the NPA to withdraw the charges.

A week after he had called the press conference, Abrahams suddenly announced that he was willing to “review” the charges if the “suspects” were willing to make representations. Gordhan made it clear, though, through his lawyers, that he was not going to personally apply for a review, as he doubted the NPA’s willingness or ability to provide him with a fair hearing.

In one of the letters between the NPA and HSF and FUL, the NPA’s Acting Special Director, Torie Pretorius – who has been tasked with closing several high-profile cases – writes, “It is unclear in what capacity you send the letter to us. The process at this stage remains between the State, their legal representatives and the individuals concerned.”

Letters by HSF and FUL were then forwarded by the DPCI (Directorate for Priority Crime Investigation) to the legal firm Hogan Lovells (who are also “investigating” suspicious payments to the private bank accounts of SARS No 2 Jonas Makwakwa and his girlfriend, Kelly-Ann Elskie) who then stated they had been requested by the DPCI to offer “advice and assistance with a response”.

Hogan Lovells reiterates that the DPCI has no obligation to engage with “any third parties such as yourselves”.

In their founding affidavit filed on Sunday, HSF and FUL state that the bringing of the charges is a matter of national importance, as R50 billion was “wiped off the Johannesburg Securities Exchange almost immediately” (after the NPA announced it was charging Gordhan).

“This highlights the national importance of this matter, which concerns not only the liberty and dignity of an individual, but also the economy of the republic.”

Apart from this, argue HSF and FUL, the charges are “without merit” and that the unsustainability of these have been pointed out to the NPA “repeatedly”.

“The only reasonable inference to be drawn from this is that the charges are being pursued for purposes other than those set forth in the empowering provision or in legislation.”

The 90-page founding affidavit sets out why “Min Gordhan’s” is no ordinary prosecution.

“Whilst Min Gordhan enjoys, as do all individuals, the right not unlawfully to be prosecuted, the rights at issue in this matter far exceed only Min Gordhan’s. The applicants approach the court to guard against a constitutional crisis where it appears that independent institutions, such as the NPA, are being abused, have been captured or unduly influenced by third parties; are acting irrationally, arbitrarily or for ulterior purpose and the political or financial gain of others; and are acting in a manner inconsistent with their mandates.”

FUL and the HSF warn that they “reserve the right” to pursue Abrahams further as a result of his flip-flopping on the decision, at first seeking “the limelight at the press conference, taking centre stage, vehemently defending the charges, extolling to the world that the NPA had acted correctly, without fear or favour, in preferring the charges; that the allegations by the Minister [that these were spurious] could not be ‘further from the truth’”.

But later on, Abrahams’ own version states he “had nothing to do with the charges and now needs to institute further investigations to come to any decision on the sustainability of the charges”.

And while Abrahams had acknowledged that the matter needed to be resolved urgently, “he has not reviewed the charges, but airily stated that he is awaiting certain information (of unknown quality and remit) possibly to be delivered at an unknown future date, pursuant to an investigation of unknown character or length”.

The two NGOs then set the deadline of November 8 for the withdrawal of the charges “to abate further harm from being perpetuated” and for the matter not to go to court on that date.

HSF and FUL said they had been forced to approach the court on an urgent basis, so as to vindicate their and the public’s rights “against a transparently unlawful prosecution of Minister Gordhan, which, in the circumstances, smacks of ulterior purpose.” DM

Photo: President Jacob Zuma and Minister of Finance Pravin Gordhan during a meeting with business and labour leaders at the Union Buildings in Pretoria. South Africa. 09/05/2016. Siyabulela Duda (GCIS)