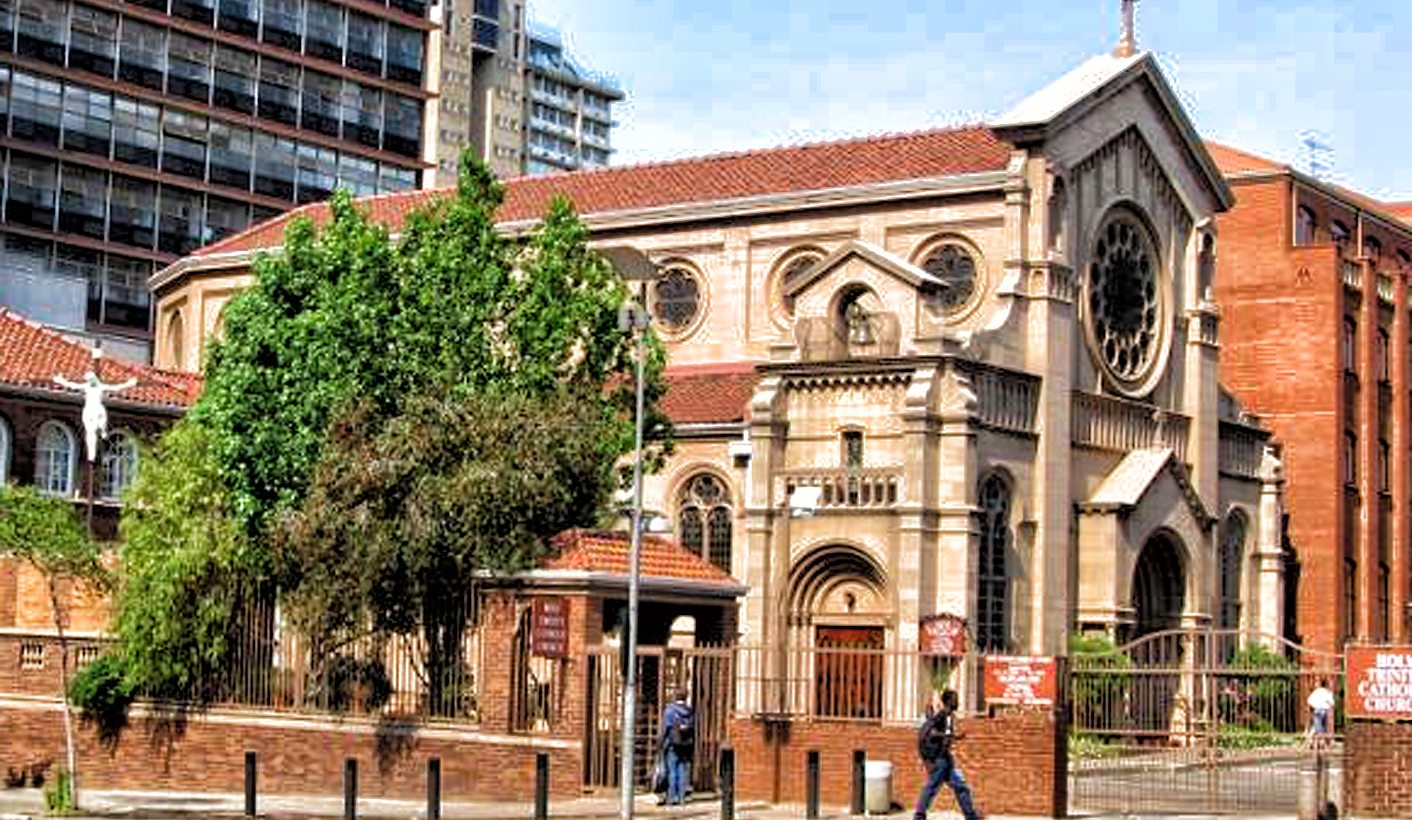 The aggressive disruption of Wednesday’s meeting of the #WitsPeaceAccord at Holy Trinity Catholic Church in Braamfontein was not just another failed meeting. It was not just another lost opportunity to take a step towards some sort of way forward for the crisis Wits University finds itself in. It was not just another affirmation of how volatile and fractured the Wits community is. It was a moment in time in which the very DNA of the church was violated. It was a moment when an age-old tradition was rejected. It was an iconic moment in which everyone lost. If it cannot be a peaceful space where sanctuary and dialogue are respected, it cannot be a space for meetings either. By RUSSELL POLLITT.

A group of missionaries accompanied people from present-day KwaZulu-Natal to Johannesburg in the mid 1890s. The rush was on: get to Jo’burg and you might find your golden fortune – not dissimilar to many people today who have migrated to Jo’burg looking for a better life. The missionaries set up shop in present-day Braamfontein and the parish community of Holy Trinity was born.

The Sisters of Mercy opened a school next to the Church – which would later relocate to Milpark and become present-day McAuley House School. The old school, known to many as “The Nunnery”, still stands next to the church. The building was sold to the university and is, today, the digital arts centre. It maintains its brand “Convent School” above the door because it, like Holy Trinity, is a heritage building.

In 1904 the South African School of Mines moved from Kimberley to Joburg. In 1906 the school was renamed and, thereafter, called Transvaal University College for 16 years. In 1922 the college was given university status and the University of the Witwatersrand was born.

From 1897 there was a church on the site where Holy Trinity stands today. The current church, which was one of the bigger buildings in the area at the time, was completed and opened in 1939. The church, over the years, watched Wits grow and expand. As the university got bigger and larger buildings sprang up, the church building lost its prominence on the landscape of Braamfontein.

In the last few weeks this church has, despite being overshadowed by the concrete jungle it inhabits, sprung to prominence again. It became the place where people, who would not and could not meet anywhere else, could encounter one another. It was seen, across the board, as a neutral space, a safe space, a place where anyone of any persuasion was welcome. Homeless people often wander in and out of the gate. Some come for food, others for clothes, others for fresh water and some, just because they can, for a chat with whoever else they find on the premises. Often you will see people sitting on the retaining wall in the car park laughing and chatting and exchanging life stories.

Some people may be perplexed as to why Holy Trinity Catholic Church provided space for meetings of various groups from the university during the turbulent last few weeks when higher education in South Africa was plunged into a deep and dark crisis. Some people suggest that the church is guilty of partiality. The church has always been partial: it has, right from its beginnings, been a partial community– if seeking ways to ensure justice is done earns you the label “partial”. Just a few years ago the community celebrated 100 years of the St Vincent de Paul Society – a group in the church that looks after the poor and destitute. It is “partial” too if it insists that it is on the side of peace and will not accept anything that threatens it.

Allowing various different groups – from the university – to meet so that justice could be sought for students who are poor and cannot afford university tuition fees is not in any way different to the work that the church has been doing for over a century. The weekly clinic, which was set up by Wits med students, soon became a place where injured students (and sometimes street people caught in the crossfire and violence) could get medical attention. Trinity has run a daily soup kitchen which has fed street people and refugees for years. Hungry, poor students have also found sustenance from the church’s kitchen. Similarly, students and people from the street could take refuge in the church when rocks, bottles and rubber bullets were flying around the campus and the streets of Braamfontein. This too, for the church, is not something that developed because of #FeesMustFall.

During the chaotic and bloody era called the European Middle Ages, many churches extended the tradition of monastic hospitality as laid out in the Rule of St Benedict, the “constitution” of western monasticism, to people fleeing violence, persecution or conflict. The Rule of St Benedict, which governs the lives of those who choose to live in communities of work and prayer (monasteries), includes in its tenets hospitality – welcoming guests coming to the community for prayer or rest. Indeed, many of the great monasteries also included in this providing a rest stop for travellers.

This principle was extended to include refuge or sanctuary. Anyone fleeing from conflict could claim this, and many did. Because it was church land, the monastery or church was sacred ground. Violence on it was prohibited. No person seeking sanctuary was allowed to bear arms within this space. Nor were any persons pursuing a fugitive – even someone suspected of a crime – allowed to remove them. Monks mediated often between pursuers and pursued, even when they may have personally sympathised with one side or the other.

These holy grounds became places where warring factions often met – under the same conditions, i.e. unarmed – to resolve disputes, to negotiate peace. This was further facilitated by the fact that from around the 9th century onwards unarmed clergy were regarded as non-combatants in wars (together with civilians and traders) under the widely-held principles of just war articulated by the Greek philosopher Aristotle and interpreted by theologians like Ambrose of Milan, Augustine of Hippo and (in the 13th century) Thomas Aquinas. It was part of a continent-wide movement to moderate or reduce conflict, called the Peace of God.

Even when the “independence” of church buildings from the state was no longer recognised in law, the tradition of sanctuary remained in many countries. The church has long served as a mediator in conflicts and disputes. The idea, if not also many of the practices, of contemporary conflict mediation and dispute resolution may well be traced to the Middle Ages practice of sanctuary.

To this day, in many places the church has acted as mediator or go-between in conflicts. Some sections of the church have even specialised in such work. Recently, the end of the civil war following the 1975 end of Portuguese rule in Mozambique was brokered by one such group, the Catholic Community of San’Egidio. In South Africa the most prominent example in recent history was the role of Regina Mundi Catholic Church in Soweto. It provided sanctuary from the apartheid police and became an iconic symbol in the fight for justice.

When conflict erupted at Wits University, Holy Trinity took the decision to uphold this monastic practice and make it a “safe and sacred” space available for medics tending to the injured and for students fleeing campus. The parish insisted that all present within its grounds be unarmed and not engaged in planning any actions entailing violence and damage to property. It also allowed itself to become a space for dialogue and negotiation. Students met, mediators met and management met. The aborted gathering on 19 October was one such attempt at a meeting.

Two words sum up the decisions made by Holy Trinity and its staff in recent weeks: sanctuary and dialogue.

Trinity has long held to the importance of dialogue in matters of church and state. It has provided space not only for theological but also socio-political discussions in the past. Its pastoral mission reflecting the four constituencies it serves (weekday attenders at Mass, homeless people, university chaplaincy and the parishioners themselves) stresses openness and dialogue, rooted in a commitment to reason and faith, prayer and service.

From these pastoral commitments, too, many on the staff were and are sympathetic to the principle behind the #FeesMustFall movement in South Africa. The parish is staffed by members of the Society of Jesus (Jesuits) who are well known globally for their commitment to accessible quality education. The idea that tertiary education should never exclude talented young people who are poor is a moral judgement. Similarly the judgement that the means used by some at Wits – class disruptions, damage to property, stone throwing and petrol bombs – is morally wrong (let alone strategically unwise), as is the often indiscriminate use of force by police, another moral judgement.

Why then has Trinity withdrawn from providing a space for meetings during the university crisis?

The reason is quite simple: the very terms by which it provided space have been violated.

The aggressive intolerance that sections of the crowd gathered on Wednesday showed to one of the many attending the meeting called by the Academic Staff Association of Witwatersrand University (ASAWU), Vice Chancellor Adam Habib, leading to him having to be escorted out of the gathering (protected by clergy, peace monitors and organisers of the meeting) violated the principles by which Trinity made itself available. It violated everything the church on that very spot has stood for in its 119 years of life.

Contrary to some who imagined Trinity to be “their” exclusive safe space, the principles of sanctuary and dialogue extended to everyone. Nobody can be excluded. While circumstances on campus often led to the space being used mostly by fleeing students, it was never their exclusive space. It was not their right to decide who could or could not use the space. Holy Trinity is not part of Wits. It is the older institution of the two – the big brother or sister. And as the property of the church it is there for everyone.

When monks gave people sanctuary in the Middle Ages, they gave it to everyone. Everyone was expected to abide by the rules. These principles cannot be violated like they were on Wednesday.

It has not been an easy decision – in fact it has been a very difficult one because it is in the very DNA of this church to provide sanctuary in multiform ways for everyone. It’s worrying (and ironic) that participants in Wednesday’s #WitsPeaceAccord disturbed this century-old landmark which has been a place where generations have found peace. If it cannot be a peaceful space where sanctuary and dialogue are respected, it cannot be a space for meetings either. DM