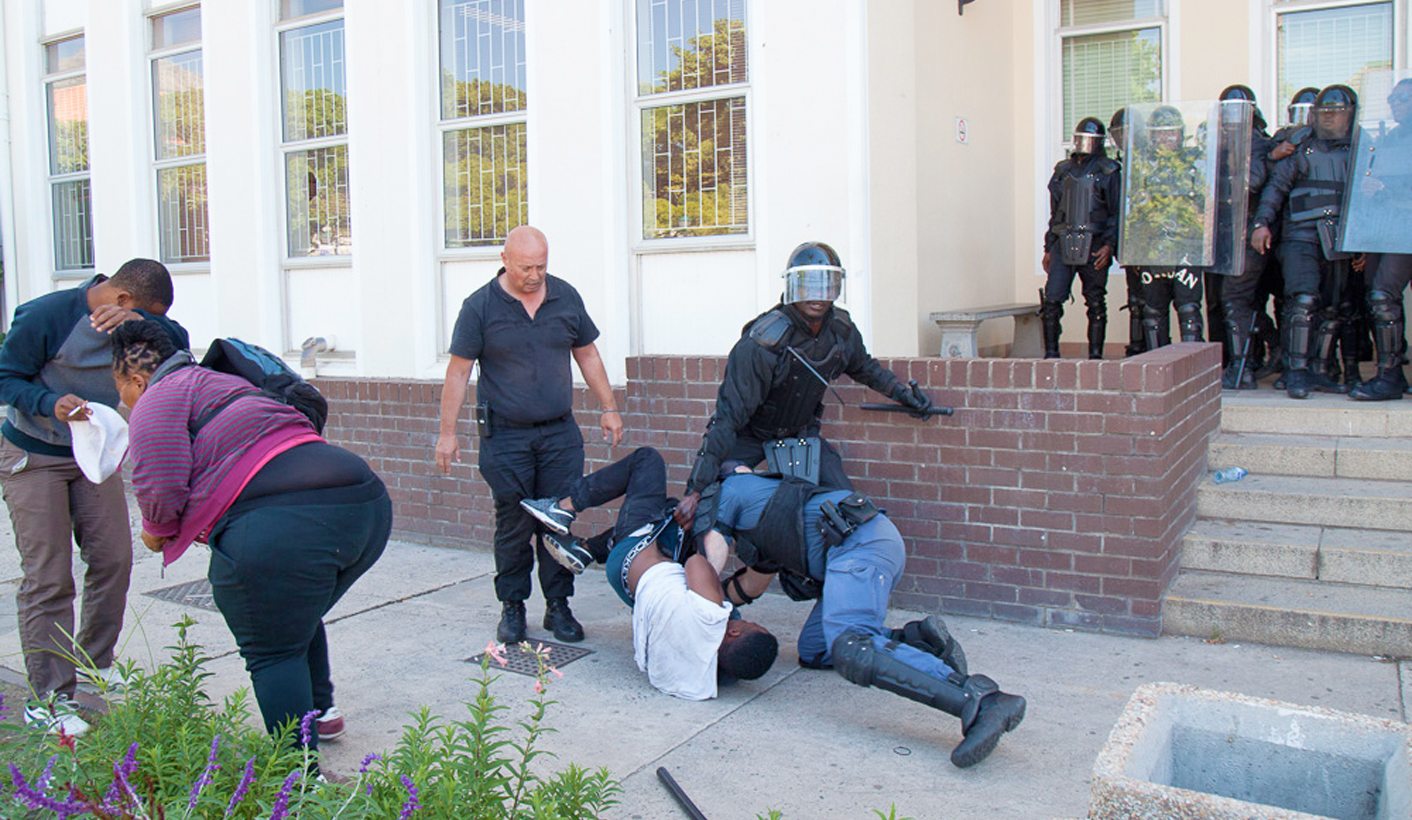 Student protesters of the Fees Must Fall movement at Stellenbosch University clashed with police and private security this afternoon. Between four and six students were detained. By Diana Mellow and Ashraf Hendricks for GROUNDUP.

About 30 students and workers were protesting outside the Faculty of Education building on Monday when police and private security dispersed them using pepper spray and stun grenades.

A protester argues with police after pepper spray had been used on protesters.

At the time that GroundUp was at the protest, it appeared mostly peaceful. But one protester tried to break through a police and private security line protecting the building. The police then used stun grenades and pepper spray to disperse the protesters. The protester who tried to break the line was detained. One student was dragged by his legs, and others were involved in scuffles with private security. Some protesters threw rocks at police during the altercations. Students reported being fired at with rubber bullets.

Protesters had disrupted classes earlier in the day, according to university management and social media.

“Stellenbosch university cannot be detached from the national narrative,” said Kamva Somdyala, a Stellenbosch University student and member of Fees Must Fall. “They [university management] haven’t said anything.” He said that the students don’t want to pay fees and they want the university to address them.

Somdyala said support for Fees Must Fall at Stellenbosch had been lacking because the majority of students could afford to pay their fees.

Protesters are also demanding that the suspension of 12 students be lifted, an end to outsourcing and for private security to leave the campus.

Seven of the 12 suspended students nearby said they were on hunger strike. Ashanti Kunene, an Honours student in International Relations, was suspended three weeks ago for participating in what she describes as a peaceful sit-in at the university library. She and her suspended classmates said they have been on hunger strike since last night. The suspension “served no purpose, had no grounds”, she said. “They want to make an example of us.”

Students were joined by a dozen Stellenbosch janitorial and kitchen staff members. “We don’t have money to send our children to the universities,” said a worker who spoke anonymously for fear of losing her job. The entire maintenance staff had been asked to leave Stellenbosch this morning at 07:30, she said. About half the workers joined the student protest. The worker said she also marched because “cleaners should be insourced”.

Photo: A student is detained by police outside the Education Building. Picture: Ashraf Hendricks

Main photo: A police officer and a protester scuffle at Stellenbosch University earlier on Monday. All photographs by Ashraf Hendricks.