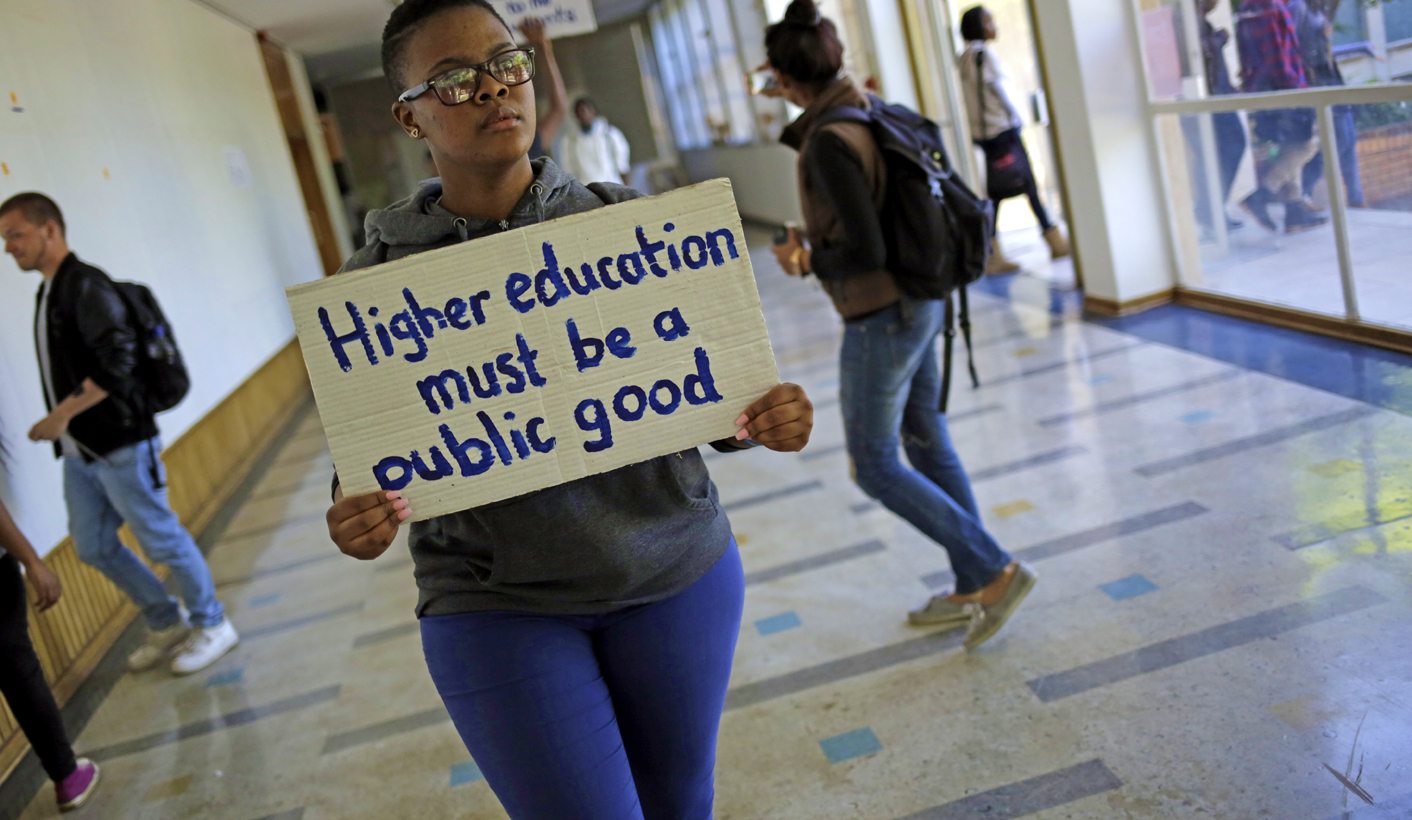 As universities warn that continuing protests will lead to campuses being closed for the year, Monday’s imbizo could have provided a way forward. Instead, divisions between the state, universities and students were entrenched. By GREG NICOLSON.

Protests at higher education institutions have reached a deadlock. Demonstrating students are using the little leverage they have to close universities, raising campus-specific issues and demanding that the government commits to free education. Universities want to open so the year’s academic activities aren’t significantly delayed. The state says its short-term interventions are already costly and there’s a commission looking into higher education funding models.

Students have been arrested. Protests over the last year have caused more than R600-million in damage, while police and security guards are accused of brutality. Many campuses have been closed.

The “Higher Education Multi-Stakeholder Imbizo” was a lost chance to provide a way forward.

Higher Education and Training Minister Blade Nzimande opened the forum, calling for “urgent but long lasting solutions to some of the immediate challenges”. The bigger challenge, he said, was that more South Africans need tertiary training. The immediate challenge was a minority of students trying to stop academic activities.

“We meet as a small minority is determined to spread anarchy and to destroy those assets the nation has dedicated to the empowerment of the next generation with the knowledge and skills they need to contribute to the future of our advanced industrial economy. What started as legitimate and peaceful protests now seem to have been hijacked by elements who seem to want to collapse the system,” said Nzimande.

“This is not the time for grandstanding of one sector portraying itself as being better than others. It is a period of sound leadership from all of us, to find solutions,” said President Jacob Zuma, listing the extra billions invested in higher education since last year’s protests. “We run the risk of a whole academic year being wasted if parents, students, university management and all stakeholders do not act now. That is why this meeting is so important.”

“The wanton destruction of university property that we have witnessed are shocking criminal acts. The problems of education funding can never justify the violence and destruction, including the loss of human life and injury.”

Zuma’s presence at the meeting was important. Demonstrating students have expressed frustration that their demands for free education have mostly been ignored by the state, while they are described as hooligans and criminals, even by Nzimande. The president left after his address, frustrating student leaders who wanted Zuma to hear their concerns and ideas. Student leaders demanded that the president return, but they were told government would soon facilitate a meeting.

“Students are tired of protesting. We’ve been protesting from UKZN for the last six weeks. We are tired of being shot at by this police system that thinks it’s living in 1976. We are tired of having private security that doesn’t even understand what the realities of students are, manhandling us as though we are thieves.”

She said student leaders could not return to their institutions without commitments from the state.

“We are not going to go back to our institutions to tell our students that yet again this government is not implementing what it has forever resolved on which is free quality education,” said Mkhatshwa.

Another student leader said that without the president present, resolutions coming out of the meeting meant little.

Before the four student representatives were all able to have their say, an angry Nzimande interrupted them.

“We agreed that we have to respect each other and listen to each other,” he said, accusing students of breaking agreements and throwing him “under the bus”.

In response, another student leader said Nzimande’s interruption was an example of the challenges they have been dealing with. “Let this be a testament of the kind of power dynamics unfolding in our country,” he said. “Let that bear testament to how students are being suffocated on a daily basis when they are asking for their material conditions to be addressed. Let this be clear that the minister is only interested in saving face in front of cameras and the country.”

Wits Vice-Chancellor Adam Habib said some students felt they needed a “Marikana moment”, to die for their voices to be heard. “We have to ask hard questions on the aspect of violence,” he said, condemning romanticised violence. He noted the importance of an immediate solution: “We need an urgent engagement to immediately resolve the fee issue‚ we cannot wait for the commission’s report.”

The commission into the feasibility of free higher education is only expected to release its report in mid-2017.

Other stakeholders also spoke, but the general hostility towards students was expressed by ANC MP and member of the portfolio committee on higher education and training, Sibongile Mchunu. She suggested the army be deployed to quell violence on campuses, and would not retract her comments despite students calling them violent. Students were not allowed to present a model they proposed on free education.

Some universities have warned that if protests continue, they might close campuses until 2017, hindering studies and graduations and limiting public services offered.

The ANC national executive committee on Monday lauded the government’s efforts to provide free education and condemned the destruction of property.

“We call on all to respect the rights of those students who wish to resume their studies and to identify and isolate those who perpetrate acts of violence and destroy public property. The NEC further asks the police and the criminal justice system to bring the alleged perpetrators to justice,” it said.

The initial declaration resulting from Monday’s imbizo was state-heavy. It acknowledged all that the government was doing, condemned unrest and violence, while also limiting security forces on campus. It committed to opening universities and further engagement on free education. Student leaders pointed out flaws, particularly related to their demand for an immediate commitment to free education. The students wanted to speak to the president and reportedly did not sign the declaration.

The imbizo failed. It exposed the state’s arrogance, the minister’s and president’s refusal to listen to different arguments, and the deep divisions currently playing out on campuses. There was little attempt, it seemed, to take students’ points seriously, which is why we will probably see continuing confrontations. DM

Photo: Students from University of the Witwatersrand (Wits) protest during the third week of ongoing protests against the cost of higher education, Johannesburg, South Africa, 03 October 2016. EPA/CORNELL TUKIRI