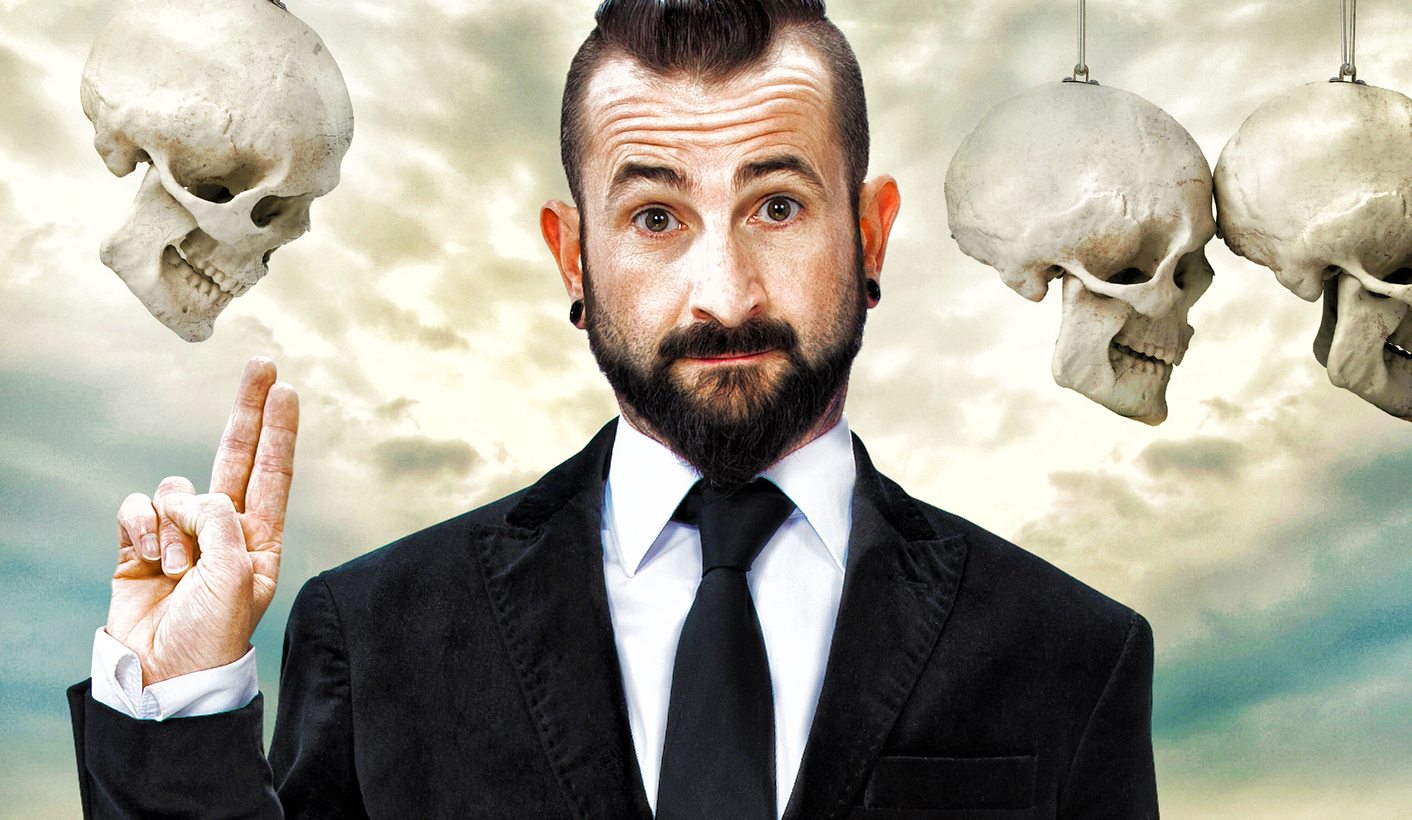 In his latest outing, John Vlismas’s rancorous wit cements his role as the most important comedian in the country. By LESLEY STONES.

At one stage, blazing comedian John Vlismas refers to his performance as a lecture. He’s chiding a drunk who’s wobbling back to his seat with a beer in each hand, and gives him an earful for escaping to the bar while the lecture is in full flow.

Vlismas can be a megalomaniac teacher, pacing the stage, spitting out facts, and telling us how the world really works. Always with the sharp-eyed, rancorous wit that makes him probably the best comedian in the country.

With Revelations II – The Good Racist, he certainly cements his role as the most important comedian in the country. Lots of other comics give you a wonderful laugh and utter escapism, but Vlismas drags you into his lion’s den, gives you a good mauling, then spits you out again, leaving you bruised, cringing and laughing anyway. And crucially, leaving thoughts in your head that were blithely absent before.

He’s also the man behind the Savanna Comics Choice Awards, an annual event working to raise the quality of stand-up comedy, not just celebrate it. The most memorable award evening was a show that scoffed at comics who trot out mindless racial stereotypes rather than risk more cerebral thinking.

Now Vlismas is doing a whole show about racism, but that doesn’t mean telling racist jokes. Nothing that easy or trite for prickly Vlismas. He’s analysing why humans are racist by digging back into genetics, history, religion and culture.

The blurb on the invitation says the media is increasingly under pressure to toe the line, the truth seems to go unnoticed, state capture has become acceptable and injustice is the new normal.

Vlismas, it says, is determined to light a cerebral fire under the seat of the nation’s pants. The show has been researched for months to become his most honest and confrontational yet. Not that he ever held back in the past.

To be honest, I doubted he could fill the massive Teatro at Montecasino for two nights, but he did. Which is a hell of a feat when shows featuring a line-up of several good comics here have been sparsely attended.

The warm-up act is Alfred Adriaan, who describes himself as the fluffer, working to get us all in the mood rather than letting Vlismas jump right in and scare us to death. Adriaan chooses the most taboo subject he can think of, crippled children, and makes a series of pretty decent jokes. He’s a likeable chap, and as Vlismas points out later, gives coloured people a stake in the evening.

We laugh at Adriaan but we’re still lukewarm and not fully embracing his journey into untouchable territory.

“You guys are not ready for what’s coming,” he quips. “You’re going to think it’s gone too far, it’s time to leave.”

We don’t need to be ready yet though. First there’s Afrikaans rap band Bittereinder to get through, with singer Jaco van der Merwe arsing around in a garish onesie at an age when he really should know better. Eish. Vlismas threatens black audience members that he’ll bring the band back on if they don’t clap harder.

Then he’s off, foul-mouthed and searing as he highlights news and events, ridiculing our own interactions and telling stories that expose the gaping flaws in society. Not just in South Africa, but in the world en masse. Donald Trump gets a slamming and China’s racist washing detergent advert is aired. There are video clips and screenshots as he lashes out at social media types who think sending a retweet makes them an activist. Vitriol is poured on white men who boast of having black girlfriends. That has the mixed race couple next to me squirming, with the drunken white guy who’s annoyed the people around him with his ebullience now reduced to a “no man, you’re wrong” sort of moping. I couldn’t tell what his overshadowed girlfriend thought.

When Vlismas rakes through religion, his atheist self gives everything an equal roasting, with Gandhi and Shaka Zulu flayed alongside Isis. No saints and idols are spared from cynical scrutiny.

The research behind The Good Racist has been extensive, with quotes from books and science journals, and a ridiculing of studies that tried to prove black people are genetically or intellectually inferior. We delve into astronomy and the Earth’s orbit of the sun. The conclusion is obvious, he says: “Same dough, different parts of the oven.”

After plenty of laughs the final moments do get very classroomy, and the show may have disappointed those expecting an evening of inconsequential frippery, especially the white and entitled who many of the barbs were aimed at. The most astute line of the evening pointed out that white men might say they didn’t support racism, but it supported them.

This is deadly serious comedy with Vlismas standing up as a driver for social change. This angry comic will be happy if he makes you feel uncomfortable as well as laugh. DM