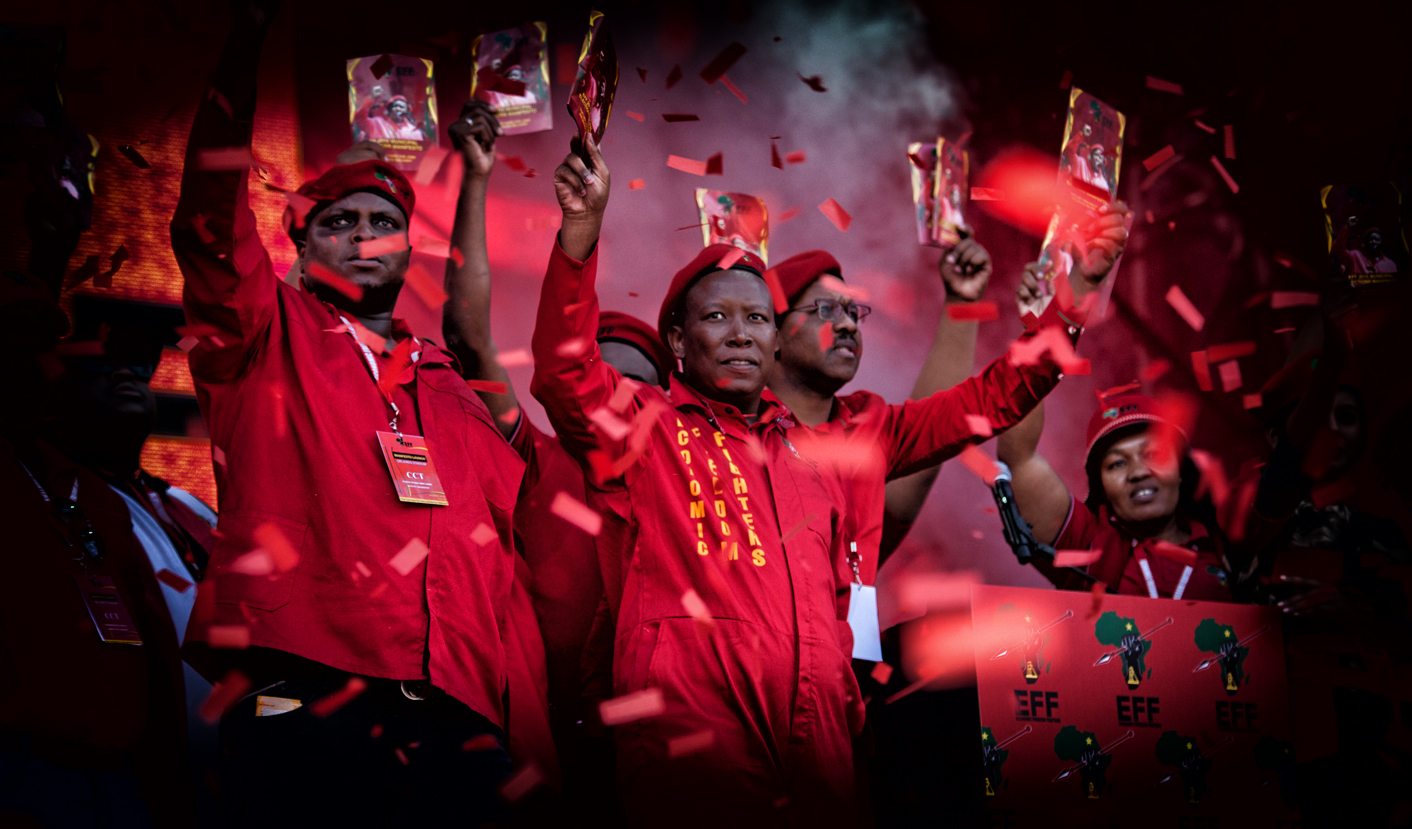 With the fury of the local government elections finally behind us, the true politics of coalition negotiation is under way. We are in a situation impossible to predict. The negotiating parties will want, and in some cases demand, different things. The stakes are incredibly high. Make a mistake, and a possibly once in a lifetime opportunity disappears. Jump too soon, and your party’s bid for relevance and a place in power could be gone forever. Worse, get into bed too soon, and it could backfire, and allow you a lifetime of leisure in which to repent. But, if we can determine the long-term aims of the main parties, we may be able to determine what will happen next. Or provide enough material for the critics of the critics (that would be us, who speculate on politics for a living). By STEPHEN GROOTES.

In South Africa at present there are only three parties that appear to have the potential to have a major impact on our history over the longer term. The ANC, the DA and the EFF are now vying for some form of control in Joburg, Tshwane and Ekurhuleni.

In Nelson Mandela Bay it seems that the smaller parties, such as the UDM and Cope, will be unable to resist the lure of political power on offer from the DA. That political power may be limited, but this is the only chance these parties can come to exercise any; they will probably have to grab it. The same may well apply in Ekurhuleni. The results are such that the ANC can govern with help from the African Independent Congress and/or with the IFP.

It could be argued that these smaller parties may also believe it would be wrong to go in with the DA in Nelson Mandela Bay or the ANC in Ekurhuleni, because that would somehow be compromising some dearly held principles. But, if the point to being a political party is to eventually exercise political power, surely their own members may put pressure on their leaders to participate. The lure of government power, for someone to whom it has previously been unattainable, is strong.

It may also help that the different small parties are involved in different metros. Thus there would be no contradiction involved, should the UDM and Cope help the DA in Nelson Mandela Bay, while the AIC and the IFP help the ANC in Ekurhuleni.

This means the real negotiations are now about Tshwane and Joburg. And the real question marks hang over the conduct of the three bigger parties, and of course, somehow inevitably, lead us to this: what does Julius Malema actually want to do?

He has several priorities that he may want to achieve all at the same time.

The first is that he needs to ensure his party is actually taken seriously, that it is a player, and that a vote in the party going forward is actually a worthwhile investment. To do this, he may need to start positioning himself as more than just a “protest party”. He may also be running out of time to do this. It is surely likely that the 8.2% of people who voted for him in these elections around the country include the 6.35% of people who voted for him in the national elections in 2014. This suggests that there could be a fairly low ceiling for the politics of protest, hence he needs to broaden his appeal.

The second priority is to prepare for the elections of 2019. There is a very real possibility that the ANC will fall below the 50% mark in just three years’ time in Gauteng. For several reasons, this could be the moment of fundamental change in our politics. But this can probably only happen if the EFF agrees to take part in a coalition with the DA. If last week’s poll had been a provincial one, the ANC would already be out of power, after winning only 45.85% of the vote in the province (still, one should be careful here, as you can’t just compare municipal and national/provincial election results; there can be different dynamics to them). This means then that the very close and attainable goal for the EFF is to co-govern not only metros, but the entire province, in just three short years’ time.

It could be suggested that the EFF then would be in exactly the same position it is in now: it can decide whether to govern with the ANC or the DA. But that depends on how it does in those elections. And in turn, that could hinge on what decisions it makes now about Joburg and Tshwane.

Unfortunately for Malema, he may already have painted himself into a corner. There has always been a lingering suspicion in some quarters that he is still a plant or an “agent” for the ANC, that he will one day return to the party. He has said, several times, that he will not enter into a coalition with the ANC. Should he turn his back on that, he would probably be punished electorally. He will be seen to have lied; people have had more than enough of being lied to, and there could be some serious consequence for his long-term political viability. That’s before we consider the fact that his main selling point is his rejection of Zuma and his policies/ethics. Malema without Enemy Zuma would be a Malema without anger; something almost impossible to contemplate. Anger has defined Malema since before Polokwane, it is his chief weapon. Without anger, there may be a real risk that he would not gain enough votes to be in a position to co-govern Gauteng.

There is also another side to this equation: would the ANC really be prepared to govern with the EFF?

While the indications in public are that it would, and while the ANC in Joburg has already confirmed that there are negotiations under way between the parties, this is something President Jacob Zuma would have difficulty living with. Imagine this scenario: The EFF does a deal with the ANC, and allows it to keep governing in Joburg. Then Zuma, for some reason known only known to himself, fires Pravin Gordhan as Finance Minister. The very real danger for him would be for the EFF, the very next day, to stand up and pull out of the coalition governing Joburg. There would be very real consequences for decisions such as last year’s sacking of Nhlanhla Nene.

In effect, for the ANC to go into any kind of coalition with the EFF gives them a veto over national political actions by the President. Zuma is unlikely to accept such a situation. And such is the fraternal love between Zuma and Malema that it would be impossible to trust The Beret-ed One, no matter how many times he said he would not do such a thing.

This aspect probably makes it all but impossible for the ANC to do any kind of deal with the EFF. While this wouldn’t matter in Ekurhuleni, it probably means the party is better placed to simply form a minority government in Joburg, and hope for the best. But this also means that the ANC might have to accept giving up on Tshwane, where it could be the DA that would form the minority administration.

When it comes to negotiating coalitions, there are also the internal aspects of the party to consider.

Malema probably has the freest of hands; what he says tends to become a reality within the EFF. On the evidence presented in the results centre last week, the DA appeared to be the most prepared. They came out several times and gave results in advance, their team looked the least stressed, and had clearly had the most sleep. The success of their campaign suggests they had done the most advance preparation. Parties preparing to negotiate with them should be aware that the DA was expecting to negotiate coalitions after these elections, and would have thought through the various scenarios very closely. This may give them some kind of advantage.

The ANC has a much tougher problem. It is bigger, more complex, and much harder to manage. Any agreement involving a big party is surely going to have to be signed off by the National Executive Committee, which means it would essentially require Zuma’s approval. This means, despite whatever arrangement Gauteng or the Joburg ANC may wish to accomplish, it could become quite difficult to push it through the party’s ultimate leadership structure. Should Malema really want to join in a coalition with the ANC, he would need assurance that Zuma would not veto it at the last minute. Such are the dynamics inside the ANC at the moment, the Gauteng ANC probably would not be surprised should Zuma let them negotiate with Malema, just so that he could pull the rug out from under them at the last minute, so as to weaken them in any internal ANC politics.

If that sounds too Machiavellian for you, you haven’t been paying attention recently.

All of this said, it is worth remembering that anything can happen. Coalition governments have the potential to split some parties, strengthen the dominant players, and generally increase general instability. But at the same time, they also tend to lead to less corruption (because the parties are watching each other so closely), and the close competition between them may, in some cases, ultimately lead to more accountability.

One last point: Such is the changing priorities of parties that this entire analysis may change within just a few days. DM

The rural poor: Some very messy basic arithmetic on Covid-19 – and it doesn’t add up