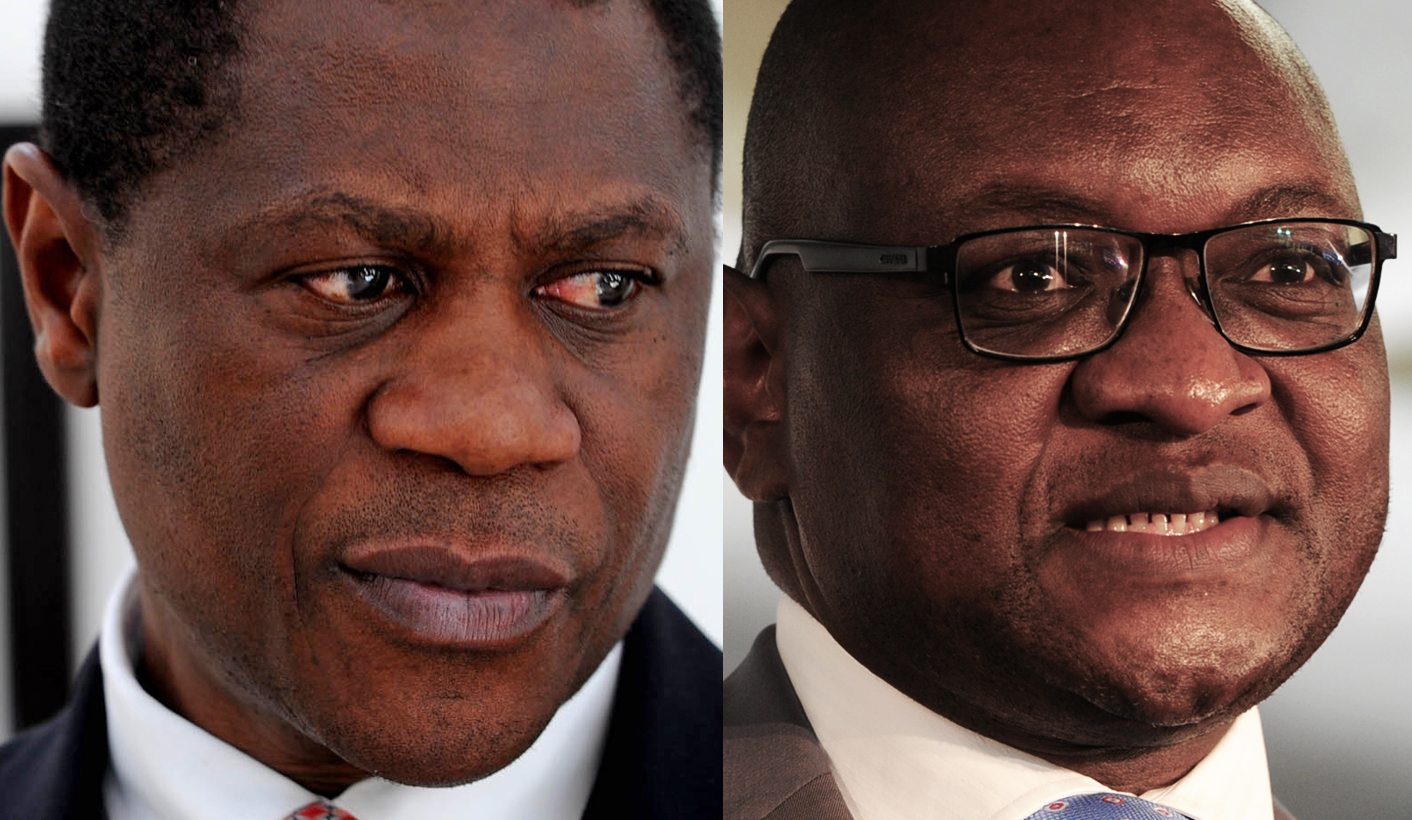 On Tuesday night, Gauteng Premier David Makhura announced he was reshuffling his provincial cabinet. The headline change was the re-introduction of Paul Mashatile into an official position in Gauteng. Mashatile will now resign as an MP and come back to the province that he loves as the new MEC for Human Settlements and Cooperative Governance. By STEPHEN GROOTES.

Makhura says the decision was made because government needs to be strengthened in the lead up the local government elections. He’s not wrong.

The move suggests that the ANC is becoming increasingly more worried about losing a big metro in SA’s wealthiest province. So they should be. The fact the national ANC has signed off on this move is an indication of how important Gauteng is to them and what could happen if it loses the province in three years’ time.

In short, it could be the beginning of the end of the party’s time in power. It is that serious.

There is no doubt that David Makhura and Paul Mashatile get on. They’ve really operated as a single political unit for years, with Makhura as ANC’s Gauteng Provincial Secretary and Mashatile as Provincial Chairman. (Makhura is now Deputy Chair of the Gauteng ANC.) One of the fights that have united them has been the onslaught they faced for a while from Luthuli House. President Jacob Zuma did all he could to make sure Mashatile was not the head of the province, going to the extent of appointing Nomvula Mokonyane as Premier in 2009. And then she was encouraged to run for the Gauteng ANC leadership against Mashatile. Such is the power of the Mashatile/Makhura operation that, with massive support from Zuma and Co, she still lost convincingly.

It is that relationship that will iron out any of the strangeness of their new situation. Technically, Mashatile is Makhura’s boss in the ANC. And Makhura is now going to be his boss in government. This may remind some people of those uncomfortable few months when President Jacob Zuma was boss of the ANC and Thabo Mbeki was boss of the country, when it didn’t end too well. That is unlikely to happen here.

What is also strange is that Mashatile was an MEC for years, and was, after Mbhazima Shilowa could no longer cope, actually Gauteng Premier for a few months before the 2009 elections. So, in some ways, this is a demotion. He became deputy Arts and Culture Minister after that, then Minister, but was eventually demoted (again by Zuma) and ended up in a dead-end job in Parliament. So he’ll resign from that position with a happy heart and a jump in his step, and a will to hit the ground running (his Twitter profile had been updated to refer to his new post within an hour of the announcement.)

Of course, this development raises a very simply question. Wouldn’t it just be easier for everyone if Mashatile was simply appointed Premier and Makhura became one of his MECs instead? But that would remind everyone of a particularly difficult National Executive Committee meeting, just after the 2014 elections. There it seemed Luthuli House would be able to force its candidate for Premier onto the Gauteng ANC. But Mashatile and Makhura held fast, and in the end the compromise was for Makhura to become Premier. It would be asking for unnecessary trouble if someone were to try to unpick all of that now. So, with Mashatile back in the province full-time, what does it all mean?

First, he is going to have some clout in the next months: he’s in charge of the one portfolio everyone’s going to be talking about, local government. And he’ll have to move fast. While Ekhuruleni appears secure, and Joburg looks relatively safe (it’s still pretty hard to imagine the DA taking Soweto), Tshwane could be in very real danger. While most people are focusing on the symbol that would be the ANC losing the Nelson Mandela Bay Metro Municipality, losing the capital would also hurt, and badly.

But his presence in Gauteng seven days a week will also allow him more freedom in ANC politics. This is probably not great news for Zuma, considering Mashatile led the failed charge against him at Mangaung in 2012. Makhura on Tuesday night was very careful to say Luthuli House had approved these moves. That may say something about the fear the ANC has of losing Tshwane.

All of this also illustrates something much more fundamental. When asked what will be the political story of the 2019 elections, many people immediately think that it will be the end of the Zuma era, and possibly a rise in opposition voting figures in the national election. Much more likely, however, is that the real story of 2019 could be the ANC losing Gauteng.

Consider these two numbers: In 2009, the ANC won over 64% of the vote in the province. In 2014 it won just 53.59%. Statistically 54%. But only just. In other words, the party lost over 10 percentage points in just five years. Considering that the black middle class is growing, and minorities seem even more disenchanted with the party than they were, and it would seem more than likely that it will lose another four percentage points. Of course, the ANC could well respond that the real problem here was actually the EFF, which won over 10 percent, close that down and the numbers change. And that more and more people are coming into Gauteng, most of who are natural ANC voters. But as our politics moves from race to class (despite the ANC’s best efforts) it seems rather possible for the ANC to actually lose the province.

Now, consider the impact that would have on the party.

At a stroke, it would move from a national party governing in urban and rural areas to one primarily focused on rural areas. It would not govern the main economic powerhouses of Gauteng and the Western Cape. Then consider the fact that the party has a terrible track record in regaining power in places where it lost it. Instead of the ANC in the Western Cape being a laboratory for learning the lessons of opposition, it has become a political disaster area, with both its Chairperson and its Provincial Secretary currently suspended. And there is no indication that it will get any better.

Then there is the question what this will do for the internal politics of the ANC. If the Gauteng ANC becomes seen as less important, because it is not actually governing, then the voice of the urban ANC will become much weaker within the party. That will benefit those from more rural provinces, with the result that they will be more likely to win policy fights, just as the country is moving from being primarily rural to primarily urban. Just imagine politicians in Bloemfontein, Mafikeng and Nelspruit having more power than those in Coburg. (Isn’t it already the case? – Ed)

The point is often made that in Zimbabwe the opposition Movement for Democratic Change controls the urban areas and ZANU-PF the rural areas, with the result that ZANU has retained power. But that misses the fact that over 62% of our population now lives in cities. For the rural ANC to gain more power than the urban ANC would lead to more disconnect from voters, which could lead to making it more difficult for the party to win those votes, accompanied with even greater swing towards rural politics of traditional chiefs. The impact of its national share of the vote could be quite dramatic as a result. Another point to make is that should the ANC lose Gauteng in 2019, it would be just as a new leader of the party is settling in, possibly after winning a contested conference in 2017. That could also allow the supporters of whoever lost to start campaigning against that leader, before they’re even comfortable.

And all of this before Tony Yengeni has to deal with the Gauteng Provincial Government slapping his Maserati with parking fines for the way he and others park outside Luthuli House. And imagine if, (gasp!) it becomes illegal to use a siren for a blue light brigade on the way to the Union Buildings… Mashatile and Makhura have their work cut out for them. There is a lot to do. They understand Gauteng better than just about anyone. There is none better that the ANC has right now to help them keep Gauteng. If Luthuli House is clever, they’ll just get out of their way, and let them do it. Even then, it may be too late. DM