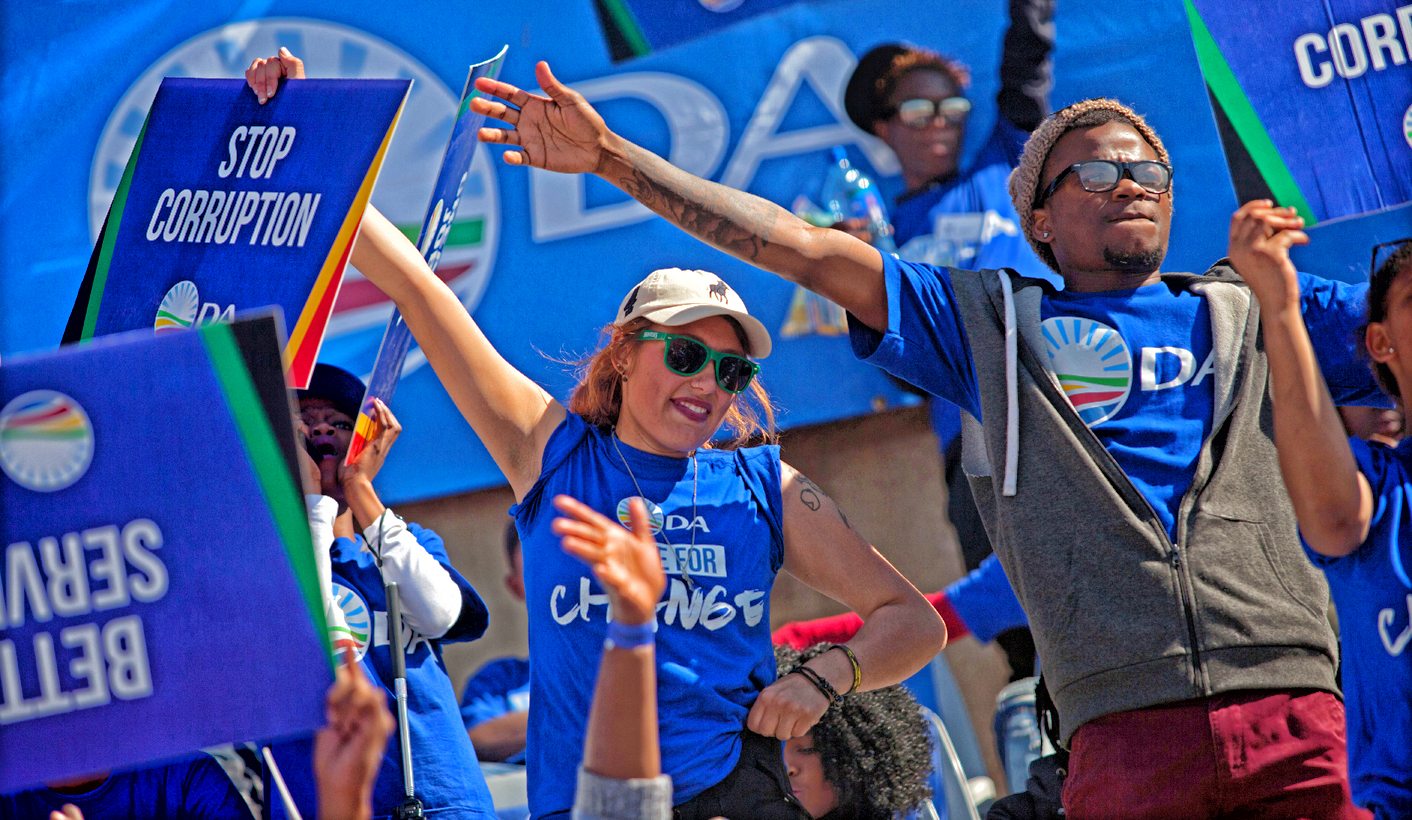 As the counting and shouting continue in the aftermath of the local government elections, only one question really matters, the one of changing political power distribution. There are different ways to measure this: power in government, via elections won, is probably the most important aspect of political power structure. But there are other measurements, like dynamics. No matter what the final tallies of this election show, some of the power balance has moved fundamentally away from the ANC and towards the DA. By STEPHEN GROOTES.

Breaking: DA leader Mmusi Maimane has claimed victory in Nelson Mandela Bay and says they will be able to form a government. ANC secretary general Gwede Mantashe told Daily Maverick that they were challenging the results in the metro due to dumped ballot papers.

Among the exhaustion, stress, and hype that is the emotional cloud otherwise known as the national results centre, there is a small group of people who look relatively relaxed about it all. In the past, the people who have been the most relaxed would be outfits like the Ubuntu Party, or memorably, the Dagga Party. This time around, it’s people who generally wear blue. It’s not that they’re not exhausted. It’s that they seem to have more confidence than anyone else.

That may be misplaced. But consider this. First thing on Thursday morning, as the results start to arrive, and the morning radio news cycle dominates car listening, the parties always make sure they have someone available to face the Sakina Kamwendo grillings and the John Robbie interrogations. This time around, the ANC didn’t muck around, it made sure its deputy secretary general Jessie Duarte was present and available. In a good mood, would Yoda say, was she not. But, she seemed to suggest, strongly, that the ANC was going to take Nkandla. It’s an important council for the ANC, if only for symbolic reasons. Nkandla did swing between them and the IFP several times. But, at the end of the day, with 100% of the vote in Nkandla counted, the IFP actually won the place. (And may now to be tempted to rename it, from “Nkaaandla” back to its rightful “Nkandla”).

It was what you could call an unforced error.

But it was also symbolic of the ANC’s campaign in this election. The Tshwane protests, the Marius Fransman sexual harassment charges, and towering above it all, the figure of President Jacob Zuma himself. All of these were symbols of the ANC’s campaign. And all of them were massive problems for the ANC. And the party had to spend a huge amount of time and energy putting out those particular fires (in the case of Tshwane, literally).

This opened some space, for the DA to put into operation what looks like an effective plan. And, more importantly, allowed the party, for the first time, to set the agenda for an election campaign.

Consider the evidence. The last twenty years are littered with literally thousands of emails from the DA to media outlets, reacting to something the ANC has done. Speech after speech, statement after statement, and court case after court case, has been the DA reacting to the ANC’s moves, affairs, scandals, policies.

This election campaign was different: It was the ANC reacting to the DA. Time and time again, we heard about how it was wrong for the party to “steal” Nelson Mandela, about how it was a party that aimed to “uphold white supremacy”. Crucially, the person saying these things was the most important newsmaker the ANC has. President Jacob Zuma himself, in speech after speech, started to talk about Mmusi Maimane, about the DA, about its history, and about its actions.

This is a political power, all on its own.

Those that think words don’t matter in politics, who suggest that power only matters if it allows you to govern, should consider this question; does Julius Malema have political power? He has, from time to time, framed the question. Whether it be around nationalization of mines, or “economic freedom”, or Nkandla, he was the one driving the national conversation.

This time around, it is the DA that has managed to do that. Never mind the rights and wrongs of using Nelson Mandela in its campaign (and from an “objective” point of view, it is surely hard to justify using the legacy of the leader of one political party to campaign for another), this is the issue that set the nation talking. And the ANC has appeared to be unable to counter this. There were two traps here. The first was that the ANC has to avoid allowing the debate to be about whether or not it was still the party of Nelson Mandela. It didn’t have to fear losing the debate, it had to fear the debate itself: if it took hold, it could only cost the party votes. Then there was the problem of possibly not reacting, which would have amounted to concession that it is not the party of Nelson Mandela.

This appears to have been good old-fashioned political strategy for the DA.

There are other reasons why the DA has been able to be successful in this. Firstly, the ANC is increasingly beginning to be focused on itself. It’s not just about leadership battles, but the strains and stresses managing a multi-class movement are mounting. In insisting on retaining Zuma as the leader, the ANC has provided the perfect target for a middle-class party to aim at. Middle class people in urban areas, no matter what their previous allegiance, are likely to be aware of how they have been made financially poorer by Zuma’s actions and how their future suddenly feels insecure. If it’s not the firing of Nhlanhla Nene, it’s the continued problems around economic policy, or the perceived looting of public resources, of the sheer lunacy that is Hlaudi Motsoneng at the SABC.

This has made the ground ever more fertile for the DA.

However, it may not have been able to do this without the help of the Economic Freedom Fighters (EFF). Not the active help of course, but through simply existing, the EFF makes it much harder for the ANC to tack left, if the DA is perceived as tacking right. Julius Malema’s strong criticism of Zuma’s ANC may also help to delegitimize the ruling party’s attempt to delegitimize the DA’s criticism through race (Stephen, that’s too much coffee! – Ed). In other words, the ANC may have preferred to be able to claim criticism of itself and Zuma is based on race. That is harder to do if it is not just the DA criticizing you, but also the EFF.

The ANC’s problem, now, is that it needs to find a way to grab the national agenda again. It has tried to do this through race, that does not appear, at this point, to have worked. And it needs to find a solution to this soon, because there is evidence that this power to set the agenda is having the consequence of leading to more governing power. In Midvaal, despite what the ANC has said about the DA, the DA has managed to increase its majority. In the Western Cape, after all of the problems in the Beaufort West Municipality, the DA is now in clear control. In Cape Town, the DA appears to have also increased its majority.

The trend then, is one that has grown in strength since 2006. People who vote DA once, tend to vote DA again. And the areas around those people, tend to start considering to vote DA. This is the trend that faces the ANC. At the moment, through its own missteps, it shows no signs of knowing how to counter it. Or how to set the agenda. DM