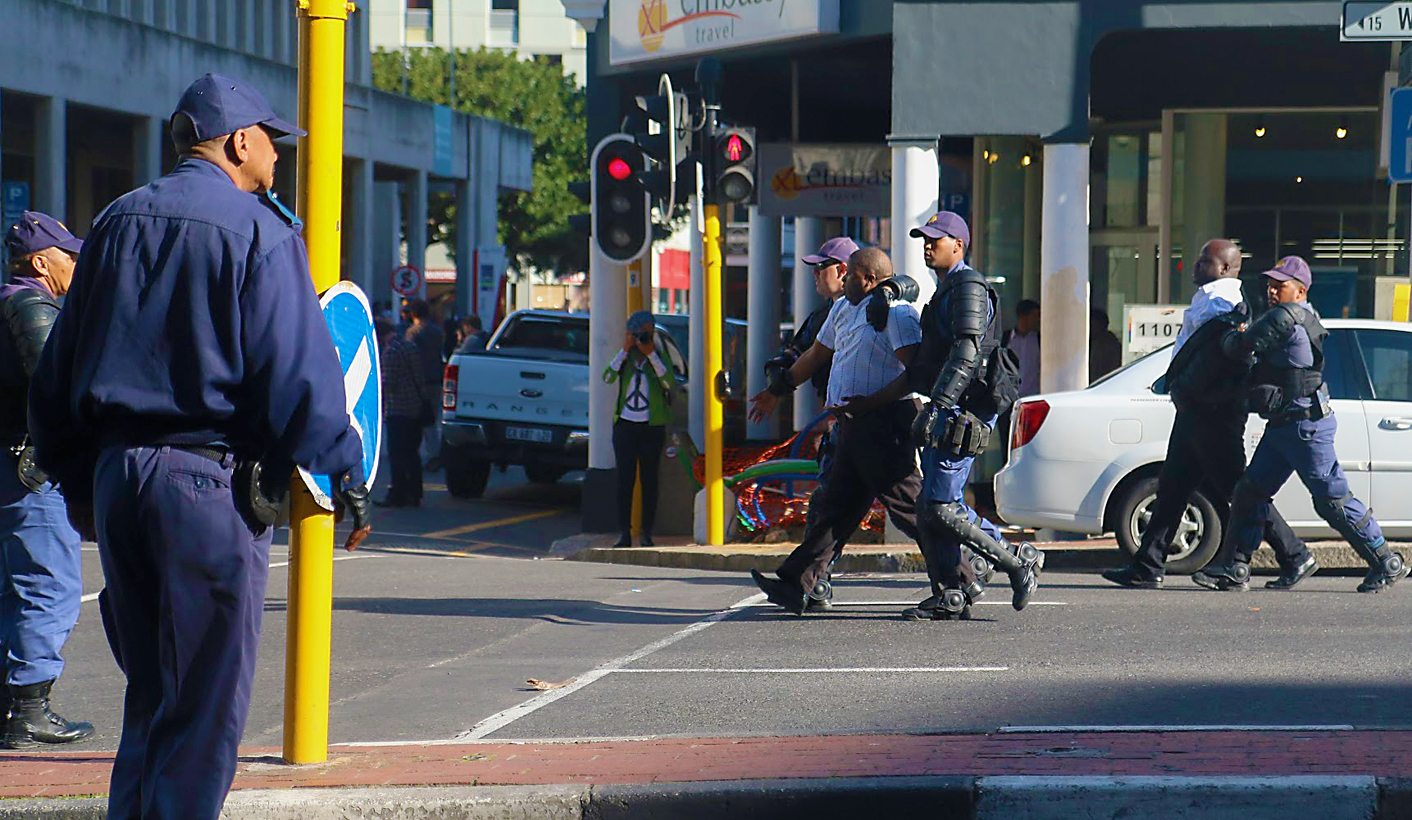 Thursday afternoon saw a contained but dramatic clash between meter taxi drivers and police in the centre of Cape Town. The Uber wars are far from over, it seems. Reporting by MARELISE VAN DER MERWE, SHAUN SWINGLER and SUMEYA GASA.

Dozens of meter taxi drivers clashed with police in Cape Town on Thursday afternoon, in a protest that ended in at least 15 arrests and threats to burn any Uber that entered the city centre. A protester on the frontlines had a firearm removed, and a stun grenade was detonated to disperse the crowd.

The demonstration followed just days after a brutal attack on an Uber driver in Manenberg, during which the driver was attacked by multiple assailants and his car torched. In the same week, Uber drivers held a protest – also in Wale Street – urging Premier Helen Zille to intervene in a dispute with the company over cash payments, which they say place their safety further at risk.

On Thursday afternoon, meter taxi drivers were objecting to the growing popularity of the Uber service, variously chanting “Uber must go!” and, more emphatically, “Uber jou p***!” and “Uber jou n***!” [Uber you c***/ Uber you f***]. Earlier in the day, the Meter Taxi Association held a meeting in Cape Town and reportedly agreed to up the stakes in the fight against Uber, the first step being to obstruct Long Street in protest. The fight reportedly escalated when a meter taxi driver tried to prevent a passenger from taking an Uber.

When Daily Maverick arrived on the scene, traffic services, private security, dogs and police had arrived and the vehicular protest had largely dispersed. The remaining protesters were on foot, but for one who had refused to move his car and been loaded – taxi and all – onto a tow truck. An eyewitness described Wale and Long streets as having been blocked by dozens of taxis until minutes previously, an account confirmed by photographs posted on social media. The remaining driver seemed supremely unconcerned by his predicament atop the tow truck; he simply tore up his traffic ticket and remained seated in his car.

The tow truck’s keys were promptly taken by one of the protesters and the taxi driver still refused to budge, which resulted in an approximately hour-long stand-off between taxi drivers and about 40 police officers.

“All these police for one taxi driver, but none when you need them,” one bystander grumbled. “That is South Africa.”

What initially appeared to be fairly passive resistance – the driver sat within the car with an almost exquisite air of ennui, smoking, amid repeated appeals over the loudhailer to return the truck’s keys – took a darker turn when the driver admitted to having a firearm in the car. When he was arrested, calm flew out of the window; police seized his firearm and shoved him to the ground as he screamed “Asseblief! Asseblief! My geld! My geld!” [Please! Please! My money! My money!]

“You should have thought of that before you brought a gun,” one officer was heard saying.

A number of other people were seized by police after it was announced that the demonstration was an illegal gathering and the crowd was given a time limit to disperse. Two were heard explaining that they were bystanders, and appeared to be released immediately. According to mayoral committee member for safety and security JP Smith, a total of 15 arrests – 12 by the SAPS and three by the Cape Town Metro Police Department – were made “for contravention of the Gathering Act”.

Despite the protest eventually being concentrated around one driver, it appeared a police presence was not unwarranted. Social media users posted numerous pictures of the chaos, including at least one smashed Uber vehicle.

Uber is already facing mounting pressures from within. About 500 of its drivers have already joined SATAWU, with the union’s spokeswoman, Zanele Sabela, telling media they are considering taking legal action against the company. Uber, said Sabela, is not charging “competitive rates” and the drivers “are not getting much out of it”. A Cape Town-based driver said at the time that Uber treated its drivers “like rubbish”.

By early evening, a small number of Ubers could be seen returning to the city centre. None, however, was anywhere near the meter taxis gathered at hotels and other common waiting areas. Meanwhile, Smith confirmed that a case had been opened by SAPS, which means that those arrested are likely to face charges. Whatever comes next, this isn’t over. DM