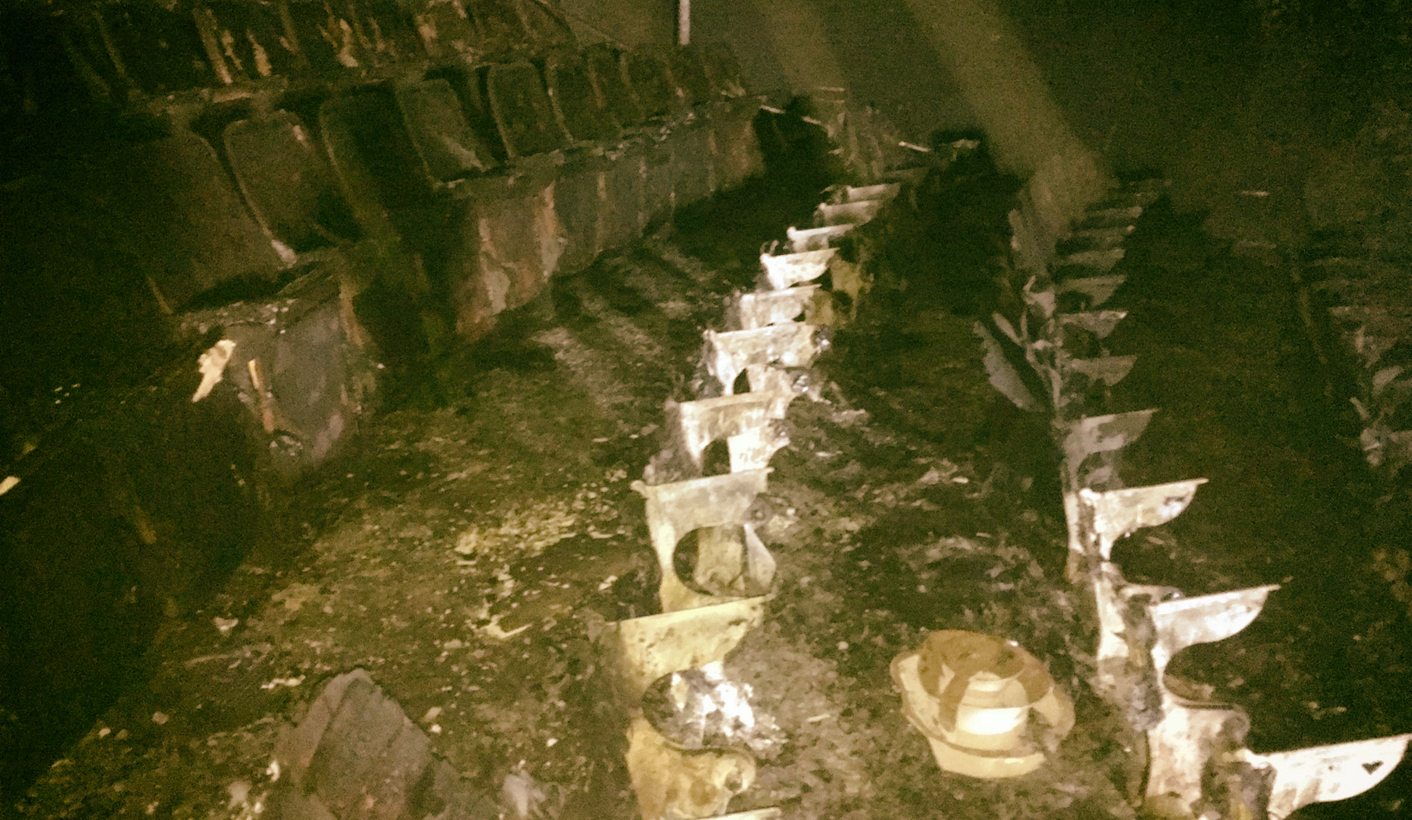 The University of Johannesburg on Monday condemned the burning of its Sanlam auditorium, where many students graduated, and moved to prevent student protests. No one is taking responsibility for the attack and, for now, theories as to who did it abound in the face of multiple grievances. By GREG NICOLSON.

After the burning of its main auditorium on Monday, the University of Johannesburg (UJ) looked to increase security measures by obtaining an interdict from the South Gauteng High Court preventing groups from demonstrating around the university’s Kingsway campus. According to SRC chairperson Rethebile Ntshinga, the court granted the interdict on Monday evening, preventing demonstrators from protesting on and within 100 meters campus. UJ’s spokesperson confirmed the attempt to obtain a court interdict but couldn’t yet confirm if it was granted.

UJ’s Sanlam Auditorium, which seated 1,000 people, and the nearby computer laboratories were gutted by fire, which the university said was caused by a “violent minority” who set the blaze at 02:00 in the morning. No one was hurt in the fire but UJ said costs amount to R100-million. While stakeholders are calling for the culprits to be caught and prosecuted, campus groups are looking at the issues that might have caused the attack.

“We will do everything within our power and in cooperation with the authorities to follow important leads, find them, prosecute them, and send them to prison for as long as possible,” said UJ vice chancellor Ihron Rensburg in a statement. He said the university “is mandated to empower 52,000 young people… and we will not allow a minuscule, violent minority to destroy the infrastructure necessary for our task”.

“There can be no doubt that this is just the latest in a set of criminal acts directed at our country’s basic and higher education institutions which must be condemned all in the strongest terms possible,” said Rensburg. “We are calling on the police, the intelligence services and the judiciary to redouble their efforts in getting to the bottom of this organised set of attacks, and in ensuring that every last one of this very small number of perpetrators is apprehended, tried, and sent to jail.”

While the vice chancellor didn’t explicitly implicate any culprits, UJ’s statement made a point of noting disciplinary action against 12 suspended students, who others have rallied around as a symbol of the university’s crackdown on demonstrators.

The SRC’s Ntshinga said there’s a feeling the auditorium’s burning might have resulted from a protest last week demanding the return of the “UJ 12”, accelerated insourcing of workers, and the removal of private security guards. “There had been threats that there would be an escalation,” he said. Monday’s arson was followed by the recent burning of UJ’s zoology department.

Campus student groups on Monday condemned the attack, while also pointing out grievances with UJ management. The SRC encouraged students to use dialogue to resolve issues. “We would like to emphasise that arson and malicious damage to property will not solve any political crisis.” It called on the university to intensify the investigations and detail how it will protect students, saying private security companies hired last year during the Fees Must Fall protests are clearly failing to perform the role.

Democratic Alliance Student Organisation chairperson Victor Silas said robust debate is the only way to address student grievances and called on those with information on the crime to report it. The money spent on private security officers “isn’t reaping students any benefit as seemingly things are getting more dangerous on campus”, he continued. Private security officers are widely condemned by UJ student groups and students and staff have noted a number of instances of harassment and assault committed by the “bouncers”.

According to Jacaranda FM, UJ SRC President Onwabile Lubhelwana on Monday said students had seen members of the Economic Freedom Fighters Student Command (EFFSC) start the fire. Students who do not want to study were responsible, he said. On Sunday, Lubhelwana posted on Facebook, “Formal and constitutional structures are put in place for a reason, let’s use them! Don’t disregard elected bodies that enjoy the support of the majority and legitimacy. Anarchy, disorder and the deliberate destruction of the regime using universities will not solve the problems of exploitation, poverty and illiteracy but will just make things worse and terrible.” He called for calm and a return of the suspended students.

The Economic Freedom Fighters Student Command at Kingsway denied any involvement in the arson and while condemning the attacks called for the removal of private security officers, saying UJ should ensure campus safety through its own protection services staff.

“We are surprised by the fact that the auditorium is always secured with bouncers, and there is heavy bouncer presence and visibility on campus yet the safety of students and workers is not guaranteed. We are disappointed that the university hires incompetent private securities who are failing to secure the campus and who continue to put students’ and workers’ safety under jeopardy,” said the EFFSC Kingsway chairperson Tshireletso Mati.

“We would like to state categorically that the EFFSC is a movement that resorts to robust engagements on issues and we always present superior logic with regards to student and workers grievances.”

On its Facebook page, the group alluded to the distrust of the private security officers by suggesting they could be behind the arson in an attempt to keep their jobs: “Word on campus is that bouncers are behind it.”

In a statement, UJ’s Fees Must Fall group said it heard of the arson with concern and the attack further limits already scarce learning facilities. It also cautioned against apportioning blame. “UJ management has already stated not only do they claim to know the cause, they know that supposedly ‘a violent minority’ started the fire. No evidence has thus far been brought forward to back their claims.”

“We call on the UJ management to refrain from making any unfounded criminal allegations against any perceived dissenting element in the University community. This is reminiscent of apartheid strategy of repression,” UJ Fees Must Fall said. Linking the arson to the 12 suspended students was “malicious” and displayed prejudice, it continued.

UJ’s statement said the students were suspended for disrupting the SRC elections but Fees Must Fall said they were suspended because they were protesting the holding of elections in a moment of crisis, after student AB Championare died after an asthma attack when a lift didn’t work to help him out of his residence and protection services failed to help.

“UJ is indeed a prison, an ‘over-securitised’ campus, where the entire university community, members of the public and especially black bodies live in fear of violence,” Fees Must Fall said, adding that the focus on the loss of property seems more important to the university than the loss of a life.

Responding to the attacks on Monday, Khaye Nkwanyana, spokesman to the higher education and training minister, said the university should work with police and “hunt down these criminals” and, if they are students, ban them for life. The arson at UJ follows violence at the Vaal University of Technology and is reminiscent of the burning of high schools in Vuwani, Limpopo. Referring to the university attacks, Nkwanyana said it’s due to an “organised fringe who have a political agenda who want to destroy the academic programme.

“There’s a clear indication amongst all these movements, Fees Must Fall, Rhodes Must Fall, the EFF, all of those groupings are part of this and it’s nationally co-ordinated. Their intention is to collapse the system completely,” he claimed. DM