In Pictures: The EFF manifesto launch 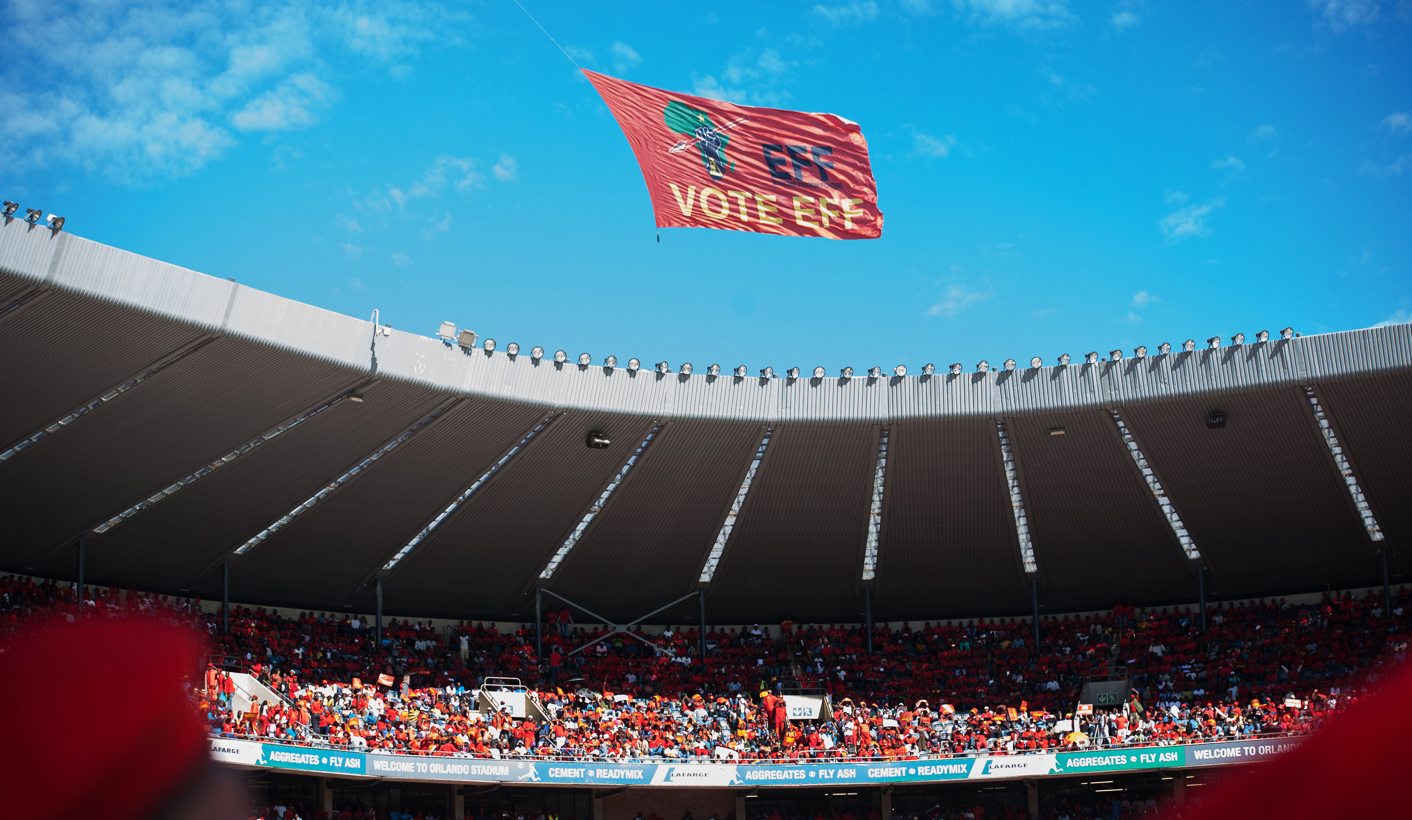 The Economic Freedom Fighters (EFF) on Saturday launched its local government election manifesto at Orlando Stadium, Soweto. While the different party proposals will now be analysed, the Fighters won the battle for festivities and filling up a stadium. By GREG NICOLSON.

Party leader Julius Malema arrived at Orlando Stadium to a rousing reception from the packed crowd. Supporters joined him and other EFF leaders, pushing their hands to the sky as if they were raising the roof as security struggled to ensure media gave Malema space. (Greg Nicolson)

Malema speaks on the phone from the Orlando Stadium stage before delivering the key address of the party’s manifesto launch. The EFF wasted little time in getting to the main event, with most artistic performances coming after Malema’s speech. (Greg Nicolson)

EFF Treasurer-General Magdalene Moonsamy sings along to Nkosi Sikelel’ iAfrika at the party’s manifesto launch. As usual, the party sang the anthem without the extracts from Die Stem. (Greg Nicolson)

Orlando Stadium was packed to capacity at the EFF’s manifesto launch, with many supporters enthusiastically cheering Malema’s speech. (Greg Nicolson)

With seats full at the EFF’s manifesto launch, some people decided to stand on the stairs. (Greg Nicolson)

While Julius Malema speaks on violence at the EFF manifesto launch, the sign language interpreter makes the signal of a gun. Malema said the EFF was not violent but after the ANC charged him last week with treason, he said his party was not scared of violence and would defend itself if intimidated. (Greg Nicolson)

“This is your weapon,” said Julius Malema, ending his speech and holding up the EFF’s election manifesto. “This is the gun I’m talking about.” The manifesto emphasised ideas to improve government services, boost employment, and provide a better standard of living for the poor. (Greg Nicolson)

EFF leader Julius Malema and party spokesperson Mbuyiseni Ndlozi at the EFF’s gala dinner after the party’s manifesto launch. Malema delivered another lengthy address, a sort of footnotes on his speech at Orlando Stadium. (Greg Nicolson)

A magician set to perform at the EFF manifesto launch waits in the tunnels at Orlando Stadium. (Greg Nicolson)

In the top tier of Orlando Stadium, a man selling cigarettes holds a placard condemning President Zuma’s relationship with the Gupta family. The stands, particularly those out of the sun in the top tier of the stadium, were packed on Saturday. (Greg Nicolson)

EFF supporters hold a coffin with President Zuma’s face on it as Julius Malema walks around the stadium on Saturday. (Greg Nicolson)

Main photo:  Hovering over Orlando Stadium and Soweto on Saturday, an enormous EFF flag was being dragged by a helicopter. Some supporters were angered when a plane carrying a DA banner circled the stadium, but they pointed out that the EFF flag was much larger. (Greg Nicolson)