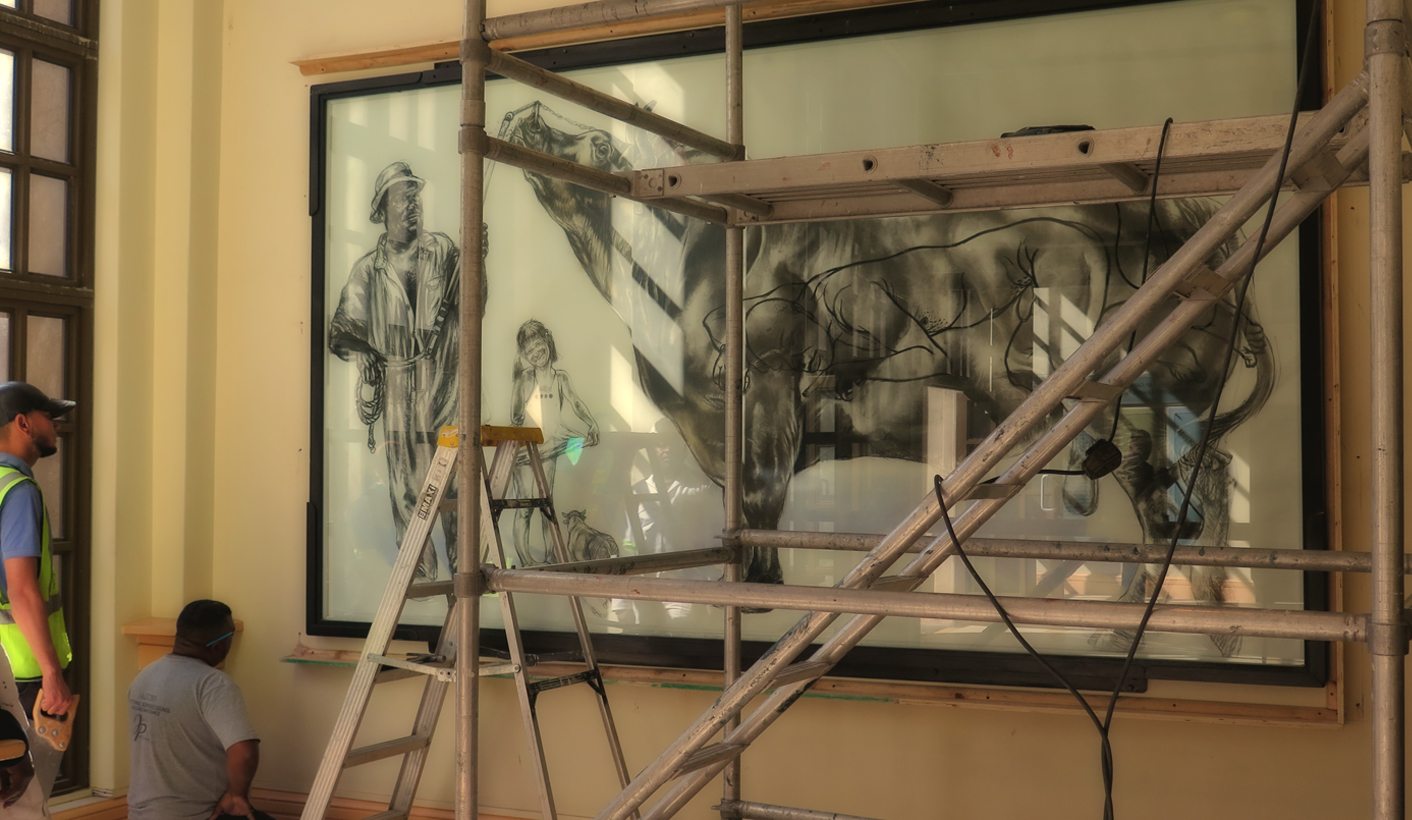 Another artwork at UCT has been hidden from view – this time by a wooden panel being placed in front of it. The artwork is award-winning artist Diane Victor’s Pasiphaë and its covering comes in the wake of numerous artworks being removed from the university. By Ashleigh Furlong for GROUNDUP.

Diane Victor’s work at the University of Cape Town (UCT) features a large bull is held by a farmer, while a small girl stands next to the farmer, smiling with a miniature bull on wheels at her feet. Inside the bull is the figure of a naked black man, sleeping.

Pasiphaë comes from Greek mythology and was the name of the daughter of the Sun God, Helios. In the myth, Pasiphaë is cursed by Poseidon and experiences lust for a bull. In order to mate with the bull, a wooden cow wrapped in cow hide is built for Pasiphaë. She hides in this cow, mates with the bull and gives birth to a son.

Victor explained to GroundUp that the artwork draws from the Greek myth, Pasiphaë, and is about the sexual awakening of the young girl in the artwork. She said that if people actually knew what was being depicted in her artwork she imagines that it “wouldn’t be seen as particularly offensive”.

Originally the artwork didn’t feature the black man inside the bull but Victor added the figure in an effort to make a more obvious connection to the myth of Pasiphaë and the young girl’s sexual awakening.

“[The artwork] was made specifically to be provocative to the white male farming community,” explained Victor.

Victor said the removal of her work was “slightly comical” and that if the artwork was not viewed on a “simplistic level” people would see what she was trying to convey, which was not a racist message.

She said that very often artwork is “made to be provocative” and that to feel anger at an artwork is not a bad thing.

Dr Peter Anderson, Chairman of the Works of Art Committee at UCT, told GroundUp, “The piece by Diane Victor was identified as offensive as far back as the Rhodes Must Fall protests in 2015. The Artworks Task Team recommended that it be stored pending their deliberations, at a time when it looked vulnerable – i.e. in the wake of the burnings in February. It is all but immovable, being heavily fixed into the masonry of the wall on which it is hung. Its steel frame makes it very heavy and the University of Cape Town has no suitable storage space.”

He continued, “It has been the idea of the Works of Art Committee to use the picture surface – covered – as a platform on which to post information and receive comments about the distribution of art on campus; to signal, in other words, the conversational space that we all want in the matter of art on campus. Some may think the work is being censored, others – we would hope – will understand that a temporary restriction of view makes for another mode of seeing the work, less flat and obvious, more thoughtful and imaginative. So the exercise should be read as an essay in creative curation, and strictly part of the dynamic process of engagement under way.

“We are creating spaces for engagement and discussion. Work is not being censored or permanently taken down.” DM