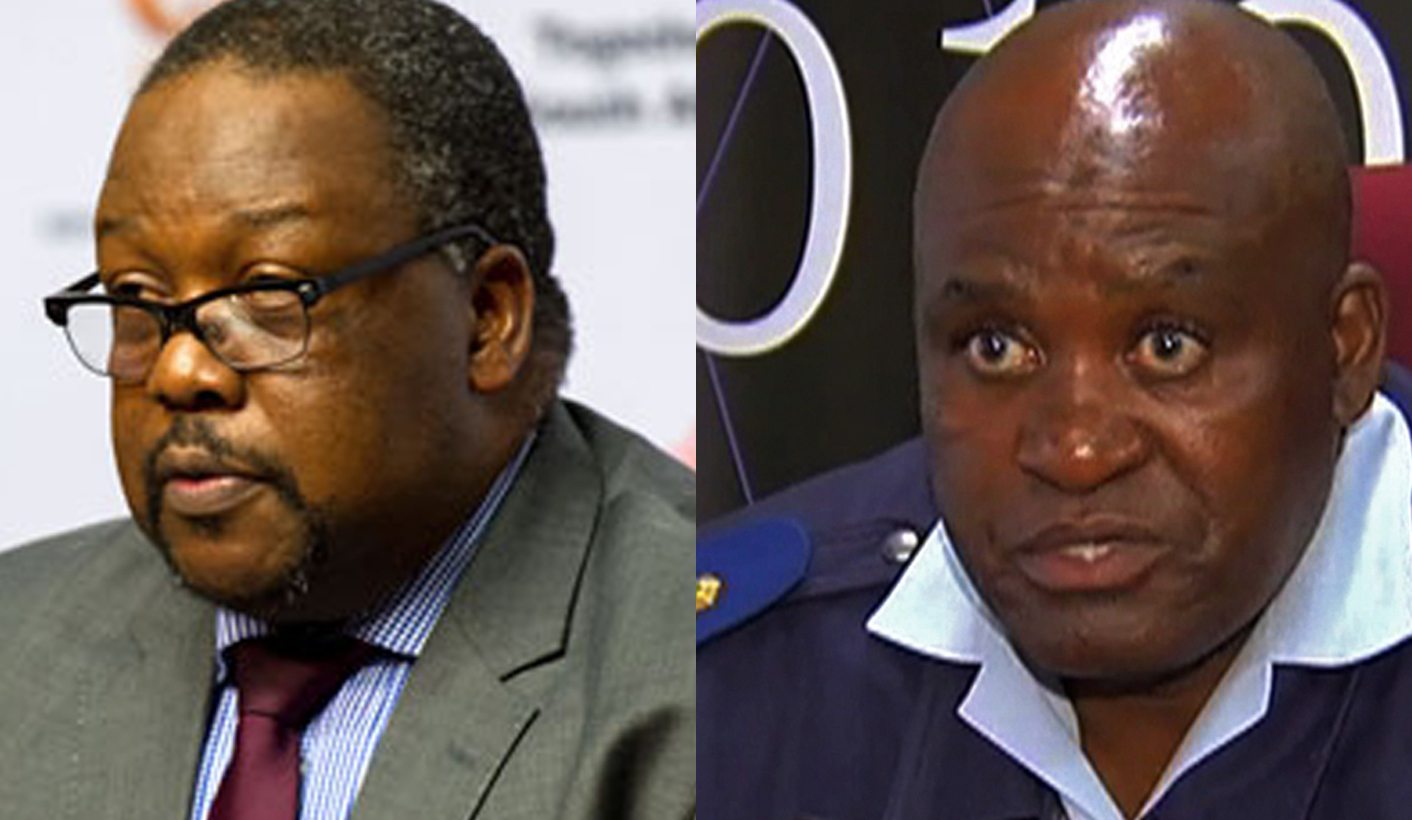 While the Helen Suzman Foundation and Freedom Under Law have gone to court to try to remove Lieutenant-General Mthandazo Ntlemeza from his post as national Hawks head, its legal team has been denied access by Police Minister Nkosinathi Nhleko to his ministry’s “secret” Cabinet memorandum that unlocks some of the mystery around this controversial appointment. Insiders say this document explains why the selection panel deemed it unnecessary to subject Ntlemeza to a competency assessment and how it recommended that he be paid a R1.6-million annual salary. And they point out, the Ministry of Police failed to mention in its Cabinet memorandum that while Ntlemeza was acting in this key post, he was described in a judgment by a high court judge as being “biased and dishonest” for making false statements under oath. By GLYNNIS UNDERHILL

If Police Minister Nkosinathi Nhleko and his selection panel had any reservations about the appointment of Mthandazo Ntlemeza as national Hawks head, they certainly did not share them in the Ministry of Police’s Cabinet memorandum on their preferred candidate for the job. Instead, they failed to disclose to Cabinet that Ntlemeza had faced some scathing judicial criticism while he was acting in the top post at the Hawks.

Reliable sources close to events say the indictments on his character by a high court judge should have made Ntlemeza an unsuitable candidate for the top job at the Directorate for Police Crime Investigation (DPCI), popularly known as the Hawks. With its mandate to investigate high-level and high-profile corruption and organised crime cases, which often implicate important political figures, the person chosen as the preferred candidate to head this crime unit would require an impeccable record.

Which is why there are grave concerns about why it was not red-flagged in the Ministry of Police’s Cabinet memorandum that Judge Elias Motojane had criticised Ntlemeza’s conduct in judgments handed down in the North Gauteng High Court in Pretoria on the suspension of former Gauteng Hawks head Shadrack Sibiya. Motojane stated in his judgment that he agreed with Sibiya that the decision made by Ntlemeza to suspend him was “taken in bad faith and for reasons other than those given”.

This might have worried some members of the Cabinet, if they had been referred by the Ministry of Police to the relevant judgments. For when Ntlemeza launched an application for leave to appeal this finding in the Sibiya matter, the judge dismissed his application. And in his leave to appeal judgment, Motojane described Ntlemeza as being “biased and dishonest” and stated that he “lacked integrity and honour” as he had made false statements under oath.

Yet there was only praise for Ntlemeza in the Cabinet memorandum, in which Nhleko asked the executive to endorse the appointment of his preferred candidate as national head of the DPCI, say informed sources.

Apparently you wouldn’t guess at the turmoil Ntlemeza brought to the Hawks when reading this Cabinet memorandum, which was dated 24 August last year, marked “secret”, and signed off by Nhleko. Seemingly undaunted by the fuss caused by the judge’s criticism, Ntlemeza fast-tracked numerous promotions and appointments, and set about sidelining and suspending top Hawks members.

This Cabinet memorandum is understood to have outlined how there were no areas for development identified in Ntlemeza’s case, and the candidate’s performance in his interview demonstrated an in-depth knowledge of the area of work, and a high level of proficiency to function at this level.

The selection committee, with Nhleko at its helm, unanimously agreed to recommend the appointment of Ntlemeza, Daily Maverick was informed. And the salary recommended for Ntlemeza in the memorandum was apparently an unusually generous R1.6-million a year, which also came with a seven-year contract.

There are still unanswered questions around why the selection panel deemed the required competency assessment of Ntlemeza unnecessary. The memorandum is understood to have explained this away to the Cabinet by stressing the urgency to fill the post, in light of the statistics regarding serious crime in South Africa.

This five-person selection panel included Nhleko as its chairman, the Minister of Justice Michael Masutha, the Minister of State Security David Mahlobo, the Deputy Minister of Police Maggie Sotyu and Major-General Yolisa Matakata, who was recently promoted to deputy national head of the Hawks, and given the rank of Lieutenant General.

The panel apparently concluded that the issue of the competency assessment was deemed unnecessary, especially when considering the experience and track record of the preferred candidate.

However, police members told Daily Maverick this competency assessment was essential to the hiring process, as it was a written assessment to test a candidate’s abilities.

It is understood that after Nhleko came into office in 2014, he changed the selection panel set up by his predecessor Nathi Mthethwa, and re-advertised the post. And this time around, Ntlemeza was shortlisted for the job.

The selection panel interviewed five short-listed candidates for the Hawks post, before Ntlemeza was chosen as the preferred candidate.

On the list of candidates short-listed for the key job was the currently suspended former Kwa-ZuluNatal Hawks head Johan Booysen. This came as a surprise to many, as Ntlemeza had been vigorously involved in trying to suspend him from his job.

The Cabinet memorandum is said to have outlined how Ntlemeza was in possession of BA Political Science and B Juris Degrees, and had more than 30 years in the police service in various capacities. The qualifications of Ntlemeza were allegedly verified.

According to reliable sources, the Cabinet was informed that the short-listed candidates for the Hawks head job were asked whether there were any pending disciplinary cases against them, and Ntlemeza said there were none. Which might have been the case at the time, as the Mail & Guardian’s investigative unit, Amabhungane, revealed in January that a fraud case against Ntlemeza that was previously closed, had now been re-opened.

As revealed in the media prior to his appointment as Hawks head, a complaint was laid against Ntlemeza by a Limpopo-based police lieutenant, Boitumelo Ramahlala, who accused Ntlemeza of not taking action against a former police captain, Thomas Rallele, who was found in an internal police investigation to have falsified vehicle log entries. Ramahlala alleged Ntlemeza had not acted against Rallele, as he was romantically involved with his daughter.

The Ministry of Police allegedly stated in the Cabinet memorandum that Ntlemeza was not serving on any boards and did not have any outside financial interests.

It also stressed the urgency of the appointment, as the post at the DPCI had been vacant since the previous Hawks head took “early retirement”.

Yet some will remember that the respected former Hawks head Anwa Dramat, who was an operative in the ANC’s military wing Umkhonto we Sizwe, was found by a court to have been unlawfully suspended by Nhleko.

Dramat resigned in April last year, and he appeared in court with his co-accused, the former Hawks head for Gauteng Sibiya, two weeks ago. Both claim they have been framed on charges of involvement in illegal renditions to Zimbabwe.

Although the Hawks under Dramat were said to be a united team, the organisation run by Ntlemeza is now deeply divided in its loyalty.

While Helen Suzman Foundation director Francis Antonie claimed in his affidavit submitted to court that Ntlemeza’s appointment is “unlawful and irrational”, there are other issues threatening the credibility of the Hawks.

Concerned members of the Hawks told Daily Maverick that this once proud elite crime-fighting unit had fallen victim to state capture. If the court decides that the appointment of Ntlemeza should be set aside, these Hawks members say this might be a step forward in the right direction. Yet that would depend, they say, on who was selected to replace him. DM