‘Bazooka’ assassination: Anti-mining activist knew his life was in danger 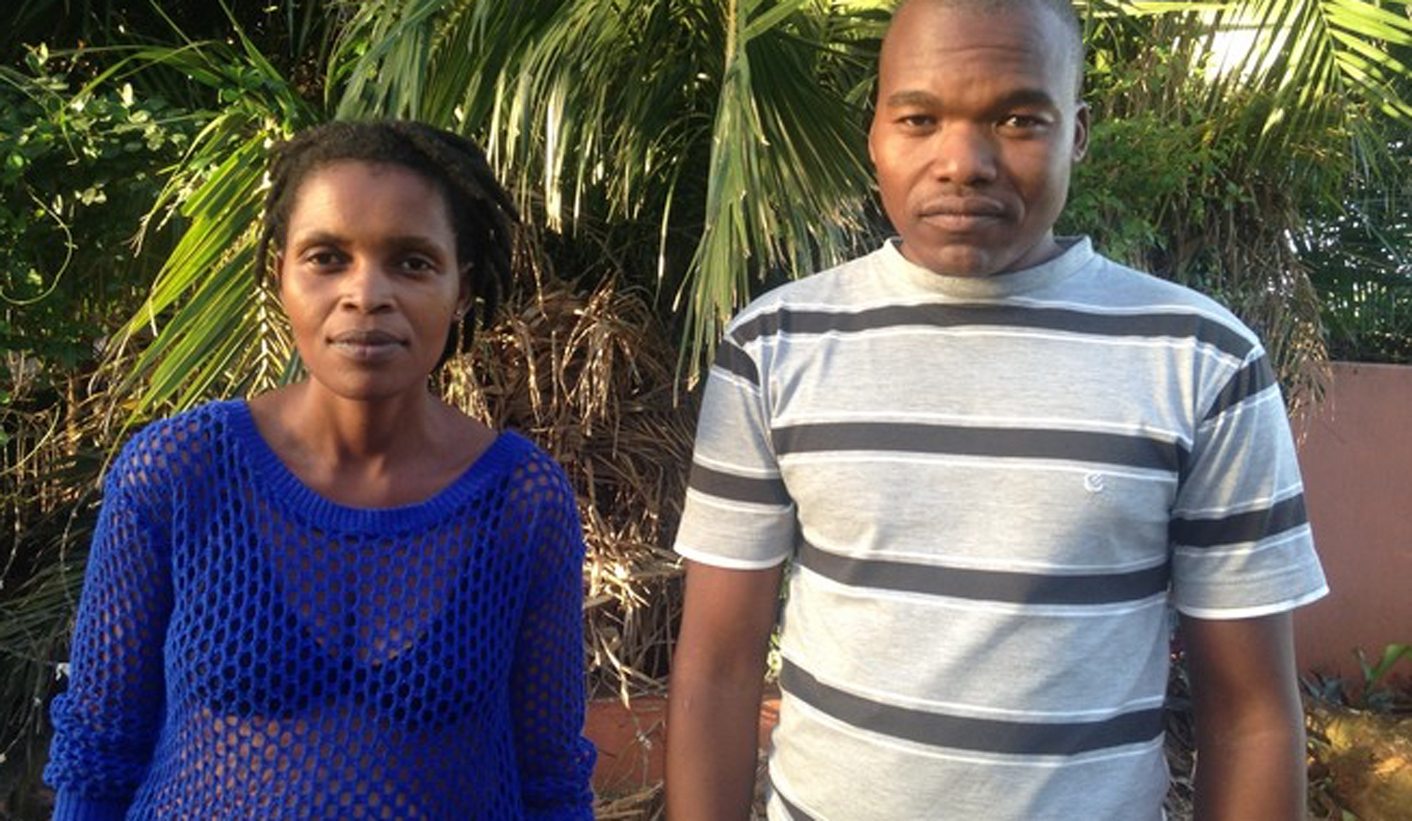 The struggle against mining in Xolobeni will continue, promises Nonhle Mbuthuma. By KIMON DE GREEF for GROUNDUP.

Xolobeni activist Nonhle Mbuthuma broke down in tears last month while addressing a mining conference in Cape Town. “Our people are being attacked. People are dying because of this,” she said, describing her community’s struggle to prevent mining on its land. Six weeks later, her friend and colleague Sikhosiphi “Bazooka” Rhadebe was assassinated.

A bid by Australian firm Mineral Commodities (MRC) to extract titanium from dunes near Xolobeni, a rural settlement at the northern edge of the Eastern Cape coast, has driven a wedge through Mbuthuma’s community since 2002. Supporters say mining will bring jobs and development to a desperately poor rural backwater. Opponents say the costs of land dispossession and environmental damage will far outweigh these gains.

A critic of the proposed project for more than a decade, Mbuthuma, 38, has become the face of local resistance to mining since featuring in the 2014 documentary The Shore Break — and a thorn in the flesh of those who want the scheme to succeed.

She is diminutive, with a clear voice and firm gaze. As the secretary of the Amadiba Crisis Committee (ACC), formed in 2010 to unite opposition to MRC in five villages of the Amadiba Tribal Authority region, she has grown accustomed to addressing large groups of people. As she spoke at the Mining Indaba panel discussion – off the cuff, without an accompanying slideshow – she grew emotional. “We can’t sacrifice our land for 22 years [of mining]. The damage will be irreversible.”

Shortly before 08:00 on Tuesday 22 March, Rhadebe, the charismatic chairman of the ACC, was shot several times outside one of his properties by gunmen posing as police. Mbuthuma raced to the scene when she heard the news, arriving to the sight of her friend and comrade dead on the ground. ?????

“I’ve never cried so hard in my life,” she told me. “But it wasn’t sadness; it was anger. I could feel it in my body. I was sweating. For a short while all I wanted was revenge.”

I met Mbuthuma on the KwaZulu-Natal south coast on Easter Saturday, four days after Rhadebe’s murder. The restaurant was busy, with Super Rugby blaring from a big screen. I took a seat and texted her to say where I was sitting.

A few minutes later a tall, thickset man approached to ask if I was waiting for anyone. “Yes, a woman named Nonhle,” I said. He asked my name and I told him. He nodded, and walked back down the stairs. He returned followed by Mbuthuma, who looked exhausted, and her uncle, Mzamo Dlamini, another prominent ACC member.

Dlamini, 37, was uncomfortable with the table I’d chosen, outside near the entrance, so we moved around the corner, to some spare benches shoved against a kitchen vent. The thickset man didn’t join us but remained close by. “He’s our driver,” Mbuthuma said.

“Is he also your bodyguard?”

She sat, leaning forward on her arms. “We have to be careful. You see a car at night, you don’t know what to think. We know we could be targeted next.”

Mbuthuma and Dlamini live more than 90 minutes’ drive from Xolobeni. Fearing for their safety, they avoid visiting the Amadiba area at night. Rhadebe, their slain comrade, encouraged them to vary where they slept as early as 2013, when local conflict over mining began to escalate. A taxi owner and entrepreneur, Rhadebe was accustomed to the threat of violence and “knew how to protect his family”, Mbuthuma told me.

“He told us we were the core leaders of this struggle, and that the only way to kill a struggle was to kill its leaders. He advised us not to sleep in one place.”

Contrary to earlier media reports, Rhadebe, 52, was not at home the night he was murdered, but at a mechanical workshop and scrapyard he owned – one of his small businesses – near the Wild Coast Casino, just inside the border of the former Transkei. The killers arrived in an allegedly hijacked white vehicle with a blue light fixed to the roof. According to Mbuthuma, who spoke to investigators, one of the vehicle’s original occupants witnessed the shooting while tied up on the back seat. The second hijacking victim was locked inside the car’s boot.

Rhadebe’s son was also there, she said. “He didn’t recognise the killers. They must have been hired hitmen, hijacking the vehicle like that. We want to know who paid them.”

According to police, the hijack victims were freed by their captors, along with their car. They were not seriously harmed physically.

Mbuthuma is clear who her opponents in the mining dispute are: Zamile Qunya, founder of the Xolobeni Empowerment Company (Xolco) – MRC’s empowerment partner – and the local pro-mining faction he leads. Qunya is also a director of Tormin, a controversial MRC-owned dune mining operation on South Africa’s west coast.

In May 2015, Qunya and five other men, including Qunya’s brother, Bashen, and the Amadiba chief, Lunga Baleni, were interdicted for violence after allegedly shooting at their opponents after a meeting where weapons were handed out. A separate case of assault was opened against Bashen Qunya for allegedly assaulting a 61 year-old woman with a knobkerrie and bush knife that same evening.

Zamile Qunya declined to comment on Rhadebe’s death when I called him. I asked what he thought of media reports linking the murder to the ongoing mining conflict in the Xolobeni region. Qunya told me that it would be improper for him to speak to the media, and suggested that I contact Rhadebe’s family directly. “In our culture, it is the family’s role to speak about such issues,” he said. (Rhadebe was Qunya’s first cousin.)

Unprompted, Qunya then told me: “If there are any allegations against me, I will be found guilty in court and sent to jail.”?

According to Mbuthuma, Rhadebe received a threatening call on 24 February 2016, two days after ACC members blocked a convoy from accessing the Xolobeni dunes. Chief Baleni, a Xolco director since 2014, had announced the beginning of “drilling” a week previously. Unsure what this would entail, ACC members prepared to block the road with their bodies. “They would have had to drive over us,” Mbuthuma told me. “We were prepared to die.” In the end, informed of the ACC’s plans, the convoy did not arrive.

Mbuthuma told me that the man who threatened Rhadebe on the telephone said: “You think you are the Goliath of the Amadiba people, but even Goliath died.”

GroundUp knows the name of the man who allegedly made the phone call but will not publish it as he could not be reached for comment.

“[Rhadebe] was very angry when that happened, and planned to go to the police,” Mbuthuma told me. “But he was a big forgiver. If he ever got angry about something he would forget it half an hour later.”

A well-known figure in the Xolobeni area, Rhadebe was a “very funny man” who had his “own art of mediation”, Mbuthuma’s uncle, Dlamini, said. “He would relieve tension by telling jokes. He was friends with everybody.”

Born into a “very poor” family, Rhadebe worked on a mine in Johannesburg as a young man, Dlamini said. After returning home, Rhadebe opened a spaza shop with money he’d saved, purchasing his first minibus taxi a few years later. “At first he couldn’t afford to hire a driver, so he drove it himself,” Dlamini said. “That’s unheard of where we come from. In the end, he made his family very rich.”

Some people have speculated that taxi violence, not mining conflict, was at the root of the killing. Rhadebe, who owned about 15 taxis, was a member of the Mzamba Taxi Owners’ Association, which has been involved in violent clashes with rival taxi groups in the past.

“The taxi industry always has issues. It has a violent reputation,” Mbuthuma told me. “But it’s been a long time since there was any taxi violence in our area.”

“When [Rhadebe] was murdered, taxi owners from different associations raced to his yard immediately,” Dlamini added. “If this was a taxi industry issue, those people would have known, and stayed away.”

Neither the Mzamba Taxi Owners’ Association nor the long-distance Uncedo Service Taxi Association, of which Rhadebe was also a member, could be reached for comment.

Mbuthuma hadn’t eaten all day when I met her, but declined to order anything. She was worried about leaving her two year-old son at home for too long. “If we have this interview at home you won’t get any Nonhle,” she told me, when I suggested moving location. “My boy demands most of my attention.”

The economist Dick Forslund is Mbuthuma’s husband and the child’s father. “He’s been looking after the child,” she said. “Moving around has been very disruptive. My boy is too young to understand what’s going on.”

A student when prospecting licences were first granted for the Xolobeni area in 2002, Mbuthuma used to listen to her family debate the merits of mining, sitting around their large fireplace at night. By 2004 she was firmly opposed to the idea.

Her grandfather was a veteran of the Pondoland Revolt of the 1950s and ’60s, when the Mpondo people rose up against chiefs who supported the apartheid state.

“He told me to never let go of our land, that it would sustain us for much longer than money,” Mbuthuma said. “He said that once we lost our land it would be gone forever.”

But not everyone in Mbuthuma’s extended family reached the same conclusion. Zamile Qunya is a close relative: his mother and Mbuthuma’s grandmother are sisters. The families used to attend funerals and functions as one clan. Since disagreeing on the mining issue they have nothing to do with each other.

“Some of our people have been bought by the mining company,” Mbuthuma told me. “They want mining to go ahead because they have been promised a lot of money. They don’t have our community’s interests at heart.”

The rage Mbuthuma felt when she saw Rhadebe’s dead body has shifted.

“He used to tell us to keep focused on the struggle, not to get distracted by seeking revenge,” she said. “Our enemy wants us to lose focus. If we go to war then that will be the end of our struggle.”

She told me Rhadebe’s killing had made her more determined to succeed. “I told myself to stop being stupid, that responding with violence wouldn’t protect the land.

“Before Bazooka died we took an oath that we would fight until the end. We’re going to continue forward, no matter if we lose some soldiers on the way.” DM