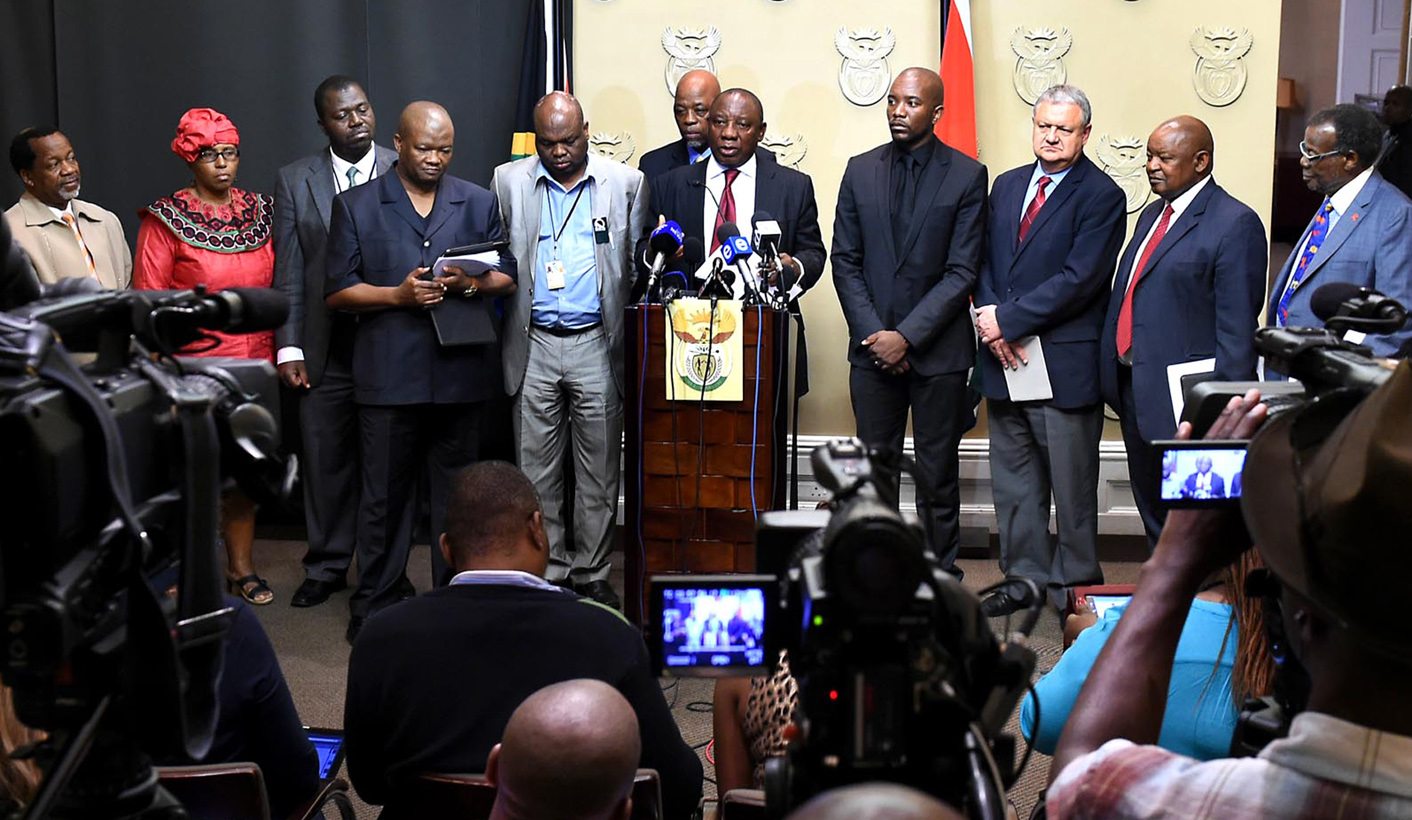 Amid the racket around the real or imagined influence of the Gupta family on the state, all indications are Parliament won’t tackle the subject. Two weeks ago the ANC used its numbers in the House to vote down DA leader Mmusi Maimane’s motion for an ad hoc committee to investigate allegations. Since then there’s been a lot of political noise and finger-pointing. Lost for now is the critical question – particularly for the institution the Constitution enshrines to hold the executive to account, Parliament – of what it means if there is even the perception that the state panders to the interests of the powerful and the moneyed, rather than serve its citizens. By MARIANNE MERTEN.

Any parliamentary committee has the powers to investigate, or inquire into, any issue under Rule 201(1)(c). That is over and above oversight and dealing with legislation “and other matters”. The parliamentary rules also permit the establishment of an ad hoc committee to investigate a specific matter. Unlike recommendations of a Rule 201 inquiry, which go to the relevant minister, ad hoc committee recommendations are presented to the House, and once adopted become a decision of Parliament.

The parliamentary rules echo Section 56 of the Constitution, which allows any parliamentary committee to summon any person to give evidence or produce documents and also allows a committee or the National Assembly to require any person or any institution to report to it. And Section 55 of the Constitution not only gives Parliament legislative powers, including the right to initiate or reject draft laws, but also imposes the duty to establish mechanisms “to ensure all executive organs of state in the national sphere are accountable to it”.

It looks great on paper and, given the MPs’ oath of office to uphold the Constitution as the supreme law of South Africa, there should be a real expectation that the national legislature upholds and rigorously implements its constitutional responsibilities.

But then enter politics. In this municipal election year, confrontational politicking across the floor of the House has increased. And then there are the Byzantine internal dynamics in the ANC, heightened by a series of league leadership elections and manoeuvring ahead of its 2017 national elective conference.

On the back of repeated convincing election results, the ANC dominates in eight of the nine provinces and all but a handful of councils. In Parliament the governing party holds the majority of seats, or 249 of 400, and pretty much can do what it wants.

Realpolitik dictates that unless the ANC proposes a parliamentary investigation of the Gupta family’s influence, or that of any other business family under a more generic “corporate state capture” heading, it will not materialise. But such an ANC move can only happen once the shifting sands of power blocs, and their associated interests, have become clearer. It is this context which perhaps underlies comments by ANC women’s league president, ANC NEC member and Social Development Minister Bathabile Dlamini: “All of us here in the NEC have small skeletons and we don’t want to take all the skeletons out because Hell will break loose.”

That does not mean the allegations of purported influence by the Gupta family have not stung the governing party, which publicly describes itself as “leader of society”. And thus the recent ANC national executive committee (NEC) said: “We reject the notion of any business or family group seeking such influence over the ANC with the contempt it deserves while also recognising the need to act to protect the integrity of our government and our organisation.”

The ANC NEC decided to “gather all pertinent information” regarding allegations of Gupta family influence and called on anyone with information to come forward to the office of the secretary-general. At the post-ANC NEC briefing, ANC Secretary-General Gwede Mantashe made it clear the governing party could not rely on “iHype” in the media and elsewhere in the public discourse. That would include concerns raised by several uMkhonto we Sizwe leaders, foundations named after the liberation movement’s stalwarts and ANC veterans, some of whom called for a dignified exit to be found for President Jacob Zuma.

The ANC NEC did not give even a notional time frame by when such information gathering should be completed. That means the space remains open for further manoeuvres in the chess game of politics. Not only in the ANC, but across the broader political landscape – and Parliament.

The national sphere now is involved as the claims around the Gupta family have escalated on to the national scene, the whispers of all too close relationships between politicians and business people having long been doing the rounds in provinces and many councils.

And so unfolded the latest tit-for-tat verbal sparring between the DA and ANC in the national legislature over whether incoming ANC Chief Whip Jackson Mthembu supported a parliamentary investigation, or a debate, of the Guptas’ alleged influence.

“As a general principle, Parliament as a forum for public debates should never quash multiparty debates. However, each proposed debate should be subjected to the established parliamentary process for consideration and a decision by all parties,” said a statement by the ANC parliamentary caucus, which dismissed as “a delusional misapprehension” the DA view that Mthembu’s public comments supported a parliamentary investigation as Maimane had proposed.

The ANC may humour an opposition request for a parliamentary debate on the Gupta family’s purported influence, or prevail to change the topic to a more general one of “corporate state capture”. Such a debate can be scheduled relatively quickly under a Rule 103 debate on a matter of public importance. But the ANC will close ranks and possibly again decide to field mostly backbenchers to show it is not taking the topic seriously, as happened in the recent debate over the motion of no confidence in Zuma.

What does bear watching is whether there may be a breeze of change following Mthembu’s public comments on the Justice Factor on how the ANC “lost credibility” over how Parliament handled Nkandlagate. There are a quite a few ANC MPs who privately admit they feel left with egg on their faces after ticking all the procedural and protocol boxes in defence of the president. It has happened before: following Zuma’s election as ANC president at the 2007 Polokwane national conference, MPs for a brief period found their voices to interrogate officialdom’s standard PowerPoint presentations.

Parliament cleared President Jacob Zuma of any wrongdoing and of any repayment in line with Police Minister Nkosinathi Nhleko’s report. The minister’s exercise as to whether there was a need for repayment was done at the behest of Zuma – he told Parliament in August 2014 – rather than the determination by the SAPS and National Treasury of a reasonable percentage of costs to be repaid as the public protector found necessary.

Thursday’s Constitutional Court judgment in the Nkandla saga will be insightful to say the least.

There will be a lot more noise about the purported influence of one family, or of white monopoly capital, and various individuals will be fingered along the way. All these episodes detract from the bigger picture.

Too many communities erupt in protest against unresponsive councillors, undrinkable water, lack of decent housing and sanitation after – as a growing body of research shows – grievances are not taken seriously by those in government.

So is access to government for the powerful with deep pockets to pursue their interests more important than the grievances of the poor? And given this is a matter of concern for the whole South African body politic, how does the people’s Parliament plan to conduct itself? So far the picture is far from rosy. DM

Photo: Deputy President Cyril Ramaphosa (C) speaks to journalists at a news conference after meeting with leaders of opposition parties at Tuynhuys in Cape Town on Tuesday, 18 November 2014. Picture: Department of Communications (DoC)/SAPA