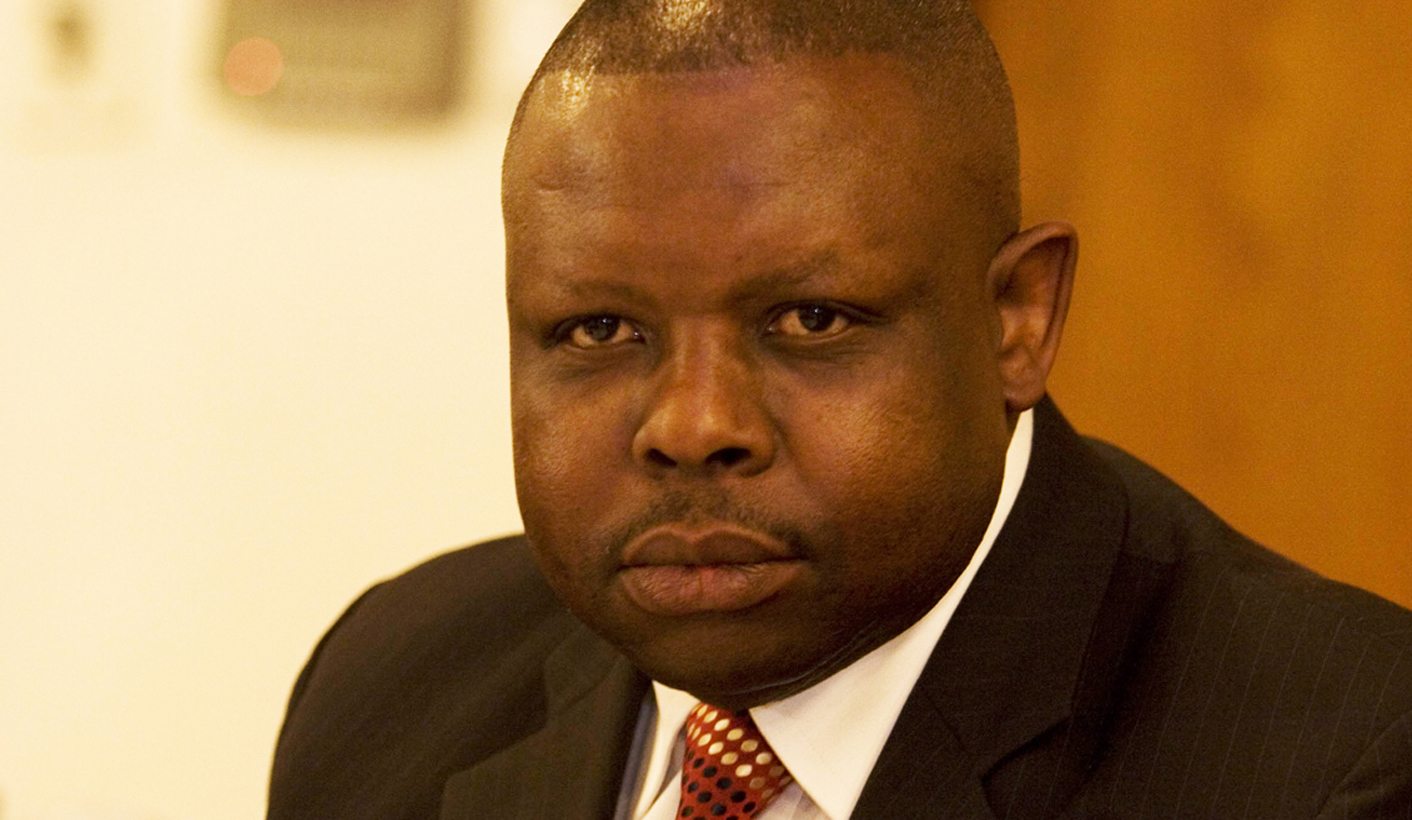 Who even remembers 2008? Well, Thabo Mbeki certainly does, if through a glass darkly, but that’s another matter. That was the year when all 11 justices of the Constitutional Court complained to the Judicial Services Commission that Western Cape Judge President John Hlophe had approached two of their members and tried to influence them with regard to four pending sensitive judgements relating to Jacob Zuma. Last week the Supreme Court of Appeal ruled that after eight years a misconduct hearing will go ahead — if it’s not delayed again. By MARIANNE THAMM.

In the introduction to his judgment on Thursday 10 March in the matter between Justices Nkabinde and Jafta vs the JSC, the President of the Judicial Conduct Tribunal, the Minister of Justice and Constitutional Development and Advocate Khanyile of the NPA, Supreme Court of Appeal (SCA) Justice Mahomed Navsa quoted Justice Jackson of the US Supreme court who in 1952 opined that “men who make their way to the bench sometimes exhibit vanity, irascibility, narrowness, arrogance and other weaknesses to which human flesh is heir”.

There are many who would say Judge John Hlophe might suffer from some of these weaknesses, irascibility being chief among them. You need only attend a case where Hlophe is the sitting judge to feel the effect of his barely concealed irritation at many things, particularly at behaviour from the media that he might consider inappropriate.

Hlophe was one of the youngest South Africans to become a Judge President and has been a controversial figure in the judiciary. From insisting he be provided with a Porsche (black) instead of the customary BMW or Mercedes as an official judge’s car (Hlophe later agreed to pay in the difference) to authoring in 2004 a 43-page report on racism in the Western Cape High court (pointing a finger at then Deputy Judge President Jeanette Traverso and Advocate Jeremy Gauntlett, now defending No 1 in the Nkandla matter) to allegedly insulting attorney Joshua Greef in 2005, telling him “you’re nothing but a piece of white shit and it’s time you go back to Holland”, Hlophe has been a divisive and polarising figure.

In 2006 Judge Hlophe faced a JSC complaint with regard to the ethics of judges receiving outside renumeration after it was made public that he had received a R10,000 monthly retainer from the Oasis financial group — a company that litigated in the Western Cape High Court. In fact Hlophe had given the firm permission to sue Judge Siraj Desai for public comments he had made about the group with regard to a proposed office block to be erected in his suburb.

At the time Judge Hlophe had said he had received verbal permission to receive the retainer from Oasis from former Justice Minister Dullah Omar, who had since died.

But perhaps the most serious allegation Judge Hlophe faces is the one made in 2008 that he had improperly approached Constitutional Court Judges Nkabinde and Jafta in an attempt to influence that court’s pending judgment in a number of related cases relating to Jacob Zuma and Thint and which related to the lawfulness of search and seizures of Zuma’s home in relation to corruption associated with the Arms Deal.

The judicial panel which heard the Zuma/Thint matter comprised of the late Justice Pius Langa and Justices O’Regan, Ngcobo, Madala, Mokgoro, Skweyiya, Van der Westhuizen, Yacoob, Nkabinde, Jafta and Kroon. It was to two of these, Nkabinde and Jafta, that Hlophe is alleged to have made the approach.

Then, on April 23, “Hlophe JP contacted Nkabinde J telephonically and requested to meet her on Friday 25 April 2008. On that day Hlophe JP visited the chambers of Nkabinde J at the Constitutional Court as agreed and without invitation, Hlophe JP initiated a conversation with Nkabinde about the Zuma/Thint cases that had been heard by the court; and in the course of that conversation, Hlophe JP sought improperly to persuade Nkabinde J to decide the Zuma/Thint cases in a manner favourable to Mr J G Zuma.”

Judge Hlophe’s approach had been disclosed “in confidence” by Judge Nkabinde to Judge Mokgoro in her chambers. She had told Judge Mokgoro that Hlophe, after asking her “which Nkabinde are you” as he had thought she was “from one of the Zulu-speaking Nkabinde families”, had informed her that “he had a mandate”.

“He then told her that the privilege issues in the Zuma/Thint cases had to be decided ‘properly’. Nkabinde J was concerned because she had been writing a post-hearing note on the aspect of privilege. Both Mokgoro J and Nkabinde J wondered how Hlophe JP had become aware of the fact that Nkabinde J had been writing on that aspect,” wrote Justice Nevsa.

Hlophe had then informed Nkabinde that he “had connections with the national intelligence. He also said that some people were going to lose their positions after the elections. Hlophe JP also said that he had outgrown the Cape High Court, that he was going to make himself available for appointment at the Constitutional Court and that Jafta AJ should also make himself available for appointment to the Constitutional Court.”

Judge Mokgoro had then suggested to Judge Nkabinde that she report the matter to Chief Justice Langa and Deputy Chief Justice Dikgang Moseneke.

Judge Nevsa last week said it was important to repeat that Judge Nkabinde had “repeatedly expressed an unwillingness to furnish an individual statement regarding the matter” and that both judges Hlophe had approached “made it clear that in their view the approach by Hlophe JP had been improper, explained that they insisted that as far as they were concerned they had dealt with the matter by rejecting the approach and did not consider it necessary to lodge a complaint or make a statement”.

However, at a later meeting attended by Justices Langa, Moseneke, O’Regan, Jafta, Kroon, Madala, Mokgoro, Sweyiya, Van der Westhuizen and Yacoob, the justices “took the view that the conduct of Hlophe JP, as reported to them, ‘constituted a serious attempt to influence the decision of the Court in the Zuma/Thint cases’ and that it was decided unanimously by all judges present that the appropriate course of action, given the gravity of the matter, was to lay a complaint with the JSC against Hlophe JP. In reaching this decision, it was specifically stated that the judges who had been approached by Hlophe JP, if Hlophe JP resisted the complaint, would have to give oral evidence to the JSC in due course.”

Judge Hlophe filed a counter complaint claiming Judges Nkabinde and Jafta had been “manipulated and pressured by the Chief Justice and his Deputy and contended that there was a political motive to get rid of him at all costs… The Judge President considered it significant that the appellants had made it very clear that they did not intend to lay a complaint against him or to make any statement about the matter.”

And so began a long and drawn-out process that has taken eight years to resolve, and which drew in Western Cap Premier Helen Zille as well as the NGO Freedom Under Law (FUL), a delay Judge Navsa last week said was “tarnishing the image of the judiciary”.

The delay was due to the fact that in 2011 the JSC was ordered to restart the disciplinary process against Judge Hlophe and establish a tribunal in terms of the amended Judicial Services Act which introduced new procedures for dealing with complaints. The tribunal was established by the JSC in 2013 but Judges Jafta and Nkabinde maintained that because the complaint had been made under the old system, the new procedures did not apply.

The “old procedures” did not require a complaint to be made under oath while the new rules obliged this to be done in the form of an affidavit. The old rules also did not make provision for the appointment of a tribunal or for a prosecutor drawn from the NPA to lead evidence.

Judge Nevsa’s ruling last week has also settled the matter of whether the NPA could collect and lead evidence when he rejected the argument by Judges Nkabinde and Jafta that it was unconstitutional for the NPA to do so as prosecutors were part of the executive and this would amount to a breach of the separation of powers between the judiciary and the executive.

Judge Navsa submitted that “the NPA is not even classified as a State Institution Supporting Constitutional Democracy (Chapter 9), but is treated as an integral part of the justice system” and that the prosecutor only collected and led evidence and could not make rulings or findings.

In his introduction to the judgment Judge Navsa noted that “the present case is concerned principally with whether steps taken in relation to a contemplated inquiry into judicial impropriety were legitimate…. It touches upon something much more foundational to the judicial institution in a constitutional democracy, namely integrity.”

And so it is, ironically, that President Zuma and his apparent ally, Justice John Hlophe, will finally both, after delays so long that many may have forgotten the issues at hand, have their days in court, maybe.

Will the tribunal get to do its work? Will there be further delays?

Ultimately, once the tribunal has heard the case it must decide whether to recommend an impeachment. Of course it all depends on who sits on the JSC — bearing in mind the balance of power is held by four presidential appointments. And if the JSC does recommend impeachment, two-thirds of our noble National Assembly must vote in favour of this. Wanna place bets anyone? Anyone? DM