Gordhan vs. Ntlemeza: A proxy battle in a war over control of the state 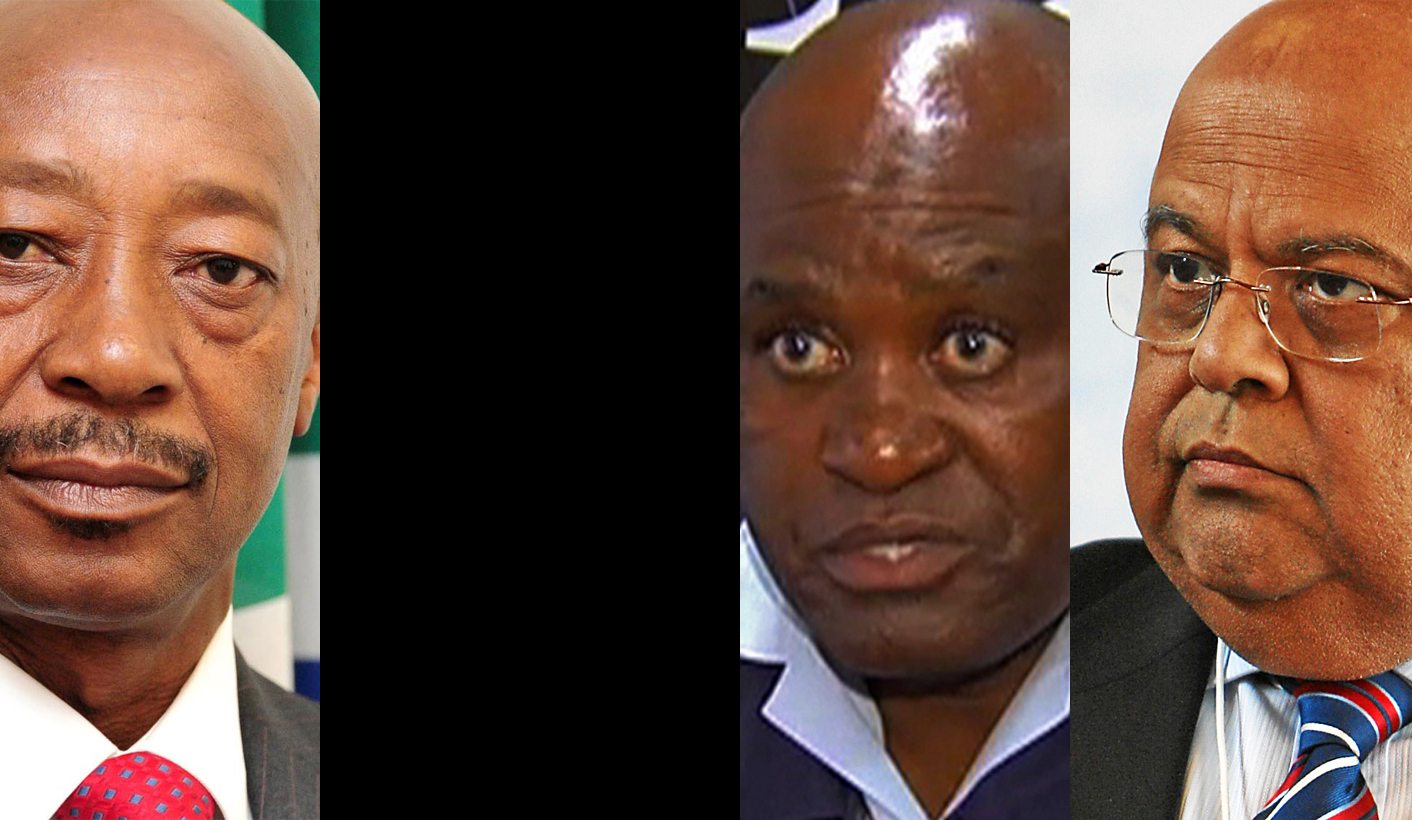 Somebody wants Pravin Gordhan to blink. It’s not that they want him to leave the Finance portfolio – that would cause too much political and economic turmoil to contain. They want Gordhan to realise his place in the political pecking order and to follow the instructions given to him. Hawks boss Berning Ntlemeza is pumping up the pressure against Gordhan so that he commits in writing to what he did and did not know about the alleged spy unit at the South African Revenue Service (SARS). The belief is that this will corner Gordhan and then he will play nicely. Gordhan clearly has other plans. But this is not just a high noon shootout between Gordhan and Ntlemeza. By RANJENI MUNUSAMY.

It is difficult to believe sometimes that the big battles playing out in the country currently are all within the same state under the control of the ANC. The Minister of Finance Pravin Gordhan is at war with the head of SARS Tom Moyane. Gordhan is seemingly under investigation by the Hawks, under Berning Ntlemeza. Ntlemeza replaced Anwa Dramat who had been investigating the state-funded upgrades at President Jacob Zuma’s Nkandla home. Dramat was under investigation for the alleged illegal rendition of Zimbabwean nationals. He was cleared by former Independent Police Investigative Directorate head Robert McBride, who is now to be charged with fraud and defeating the end of justice by the Hawks Crimes Against the State unit, which reports to Ntlemeza.

And this is just the eye of the storm. Consider the controversies involving the National Prosecuting Authority (NPA) boss Shaun Abrahams and his deputy Nomgcobo Jiba, and their battles with the KwaZulu-Natal Hawks head Johan Booysen, and most recently the other NPA deputy head Willie Hofmeyr. Then there’s the police where the National Commissioner Riah Phiyega is suspended and major changes are being made by the acting police chief Kgomotso Phahlane. It is not just the security agencies doing battle, as was evidenced in the tussle between the ministries of Home Affairs and Tourism over visa regulations, before Cabinet decided to change them.

It is all the same government turning on itself.

A most intriguing battle is playing out now between Ntlemeza and Gordhan over the operation of an alleged “rogue spy unit” at SARS. Gordhan was sent 27 questions about the unit just four days before he presented the Budget last month. Gordhan fobbed off the questions in order to deal with the Budget and then embarked on a roadshow overseas to stabilise the investment climate and try to prevent South Africa’s credit ratings from being downgraded. In the meantime, Gordhan’s lawyers had written to Ntlemeza enquiring on what authority he was questioning the finance minister. Gordhan also wanted to know if Ntlemeza was investigating an offence and what that was.

On Sunday, The Sunday Independent reported that Ntlemeza had sent Gordhan another letter giving him an ultimatum until 4pm on Monday to answer the questions. The paper said Ntlemeza warned Gordhan in the letter that the Hawks reserved its rights to invoke other powers conferred on it by law to ensure its investigation was not obstructed “by unco-operative conduct… warranting resorting to other forms to ensure compliance”.

The direct quote from the letter from Ntlemeza to Gordhan is particularly interesting considering the finance minister says neither he, nor his lawyers, actually received it. In a statement on Sunday evening, Gordhan said he was “very surprised the misleading headlines and content of the articles in some of the Independent Newspapers titles”.

“My attorneys have confirmed to me that that no other letter has been received by their office until close of business on Friday 11 March; nor by email. I can also confirm that I am unaware of any ‘new’ letter,” Gordhan said.

It means that in the desperation to ramp up the pressure on Gordhan, the Hawks did not send him the letter on Friday but got the information to The Sunday Independent by Saturday. As it was only Ntlemeza and the people around him who knew the contents of the letter, it is only logical that they leaked it. It was a clumsy error and rather proves the point made by the ANC secretary general Gwede Mantashe that the leaks from the Hawks were part of a “well calculated destabilisation plan with all the elements of disinformation, falsehoods and exaggerated facts”.

Gordhan knows that Ntlemeza made a serious blunder in his haste to pin him down. So he emptied his barrel in his media statement.

“So where is this mysterious letter? Why does one journalist among the press seem to have something at hand but the people to whom it is directed don’t? Also, why ‘leak’ a letter that has to be still studied and responded to – to further use harassment and intimidatory tactics like the old Security Police did?”

“Once again the Hawks, and those who instruct them, have no regard for the economic and social welfare of millions,” Gordhan said. Referring to his roadshow and efforts to avoid a ratings downgrade, Gordhan said: “I am acting, with other loyal South Africans, in the best interests of all South Africans so that they may have a better and more prosperous future.”

That particular shot raises the question about whose interests Ntlemeza is serving if it is not that of all South Africans. On whose behalf is he acting?

The common denominator in Ntlemeza’s battles against Dramat, McBride and Gordhan appears to be Police Minister Nkosinathi Nhleko. He hounded Dramat until he left the police service, making way for Ntlemeza, and then went in pursuit of McBride.

Earlier this month, Nhleko took the extraordinary step of calling a media briefing in Parliament and, along with State Security Minister David Mahlobo, affirmed the Hawks’ investigation into Gordhan’s role in the “rogue spy unit”, even though the executive should not interfere with operational matters. Nhleko defended the Hawks sending the questions to his Cabinet colleague saying they were part of “an ordinary exercise” to gather information. He said there was no “political manoeuvring” in the decision by the Hawks to send questions to Gordhan.

Why did Nhleko feel the need to back up Ntlemeza against his Cabinet colleague?

After he was exposed in the Constitutional Court for presenting an illegitimate report on Nkandla to Parliament and using it to justify why Zuma did not have to pay back any money for the upgrades, you would think that Nhleko would be careful not to overstep his mandate once again.

But Nhleko decided to compromise the independence of the Hawks’ investigation and present Gordhan as being unreasonable for not wanting to answer the questions. Nhleko, the consummate henchman, was willing to humiliate himself on Nkandla, weed out people unwilling to toe the line such as Dramat and McBride, toss aside people who have served their purpose such as Phiyega and now to pressure Gordhan into being compliant.

The purpose of all this is to have absolute control of the state and all its levers. Of course Nhleko is being used to achieve this, as what personal interest does he have in wanting to control the state? He is a useful idiot who does as he is told. His role is to ensure that other people in senior positions in the state do the same.

So whose interests is Nhleko serving? Gordhan said in his previous statement on the Hawks’ questions: “There is a group of people that are not interested in the economic stability of this country and the welfare of its people. It seems they are interested in disrupting institutions and destroying reputations.”

Surely it would be the imperative of the Minister of Police to disassociate with people with such a nefarious agenda and act in the national interest. But if this group wanting control of the state also controls the person who controls Nhleko, he will continue acting as henchman.

Gordhan has gained himself a powerful set of enemies. He cannot blink in the showdown with Ntlemeza and Nhleko. Only then will he see who lurks behind them, waiting for the moment when state capture will be complete. DM