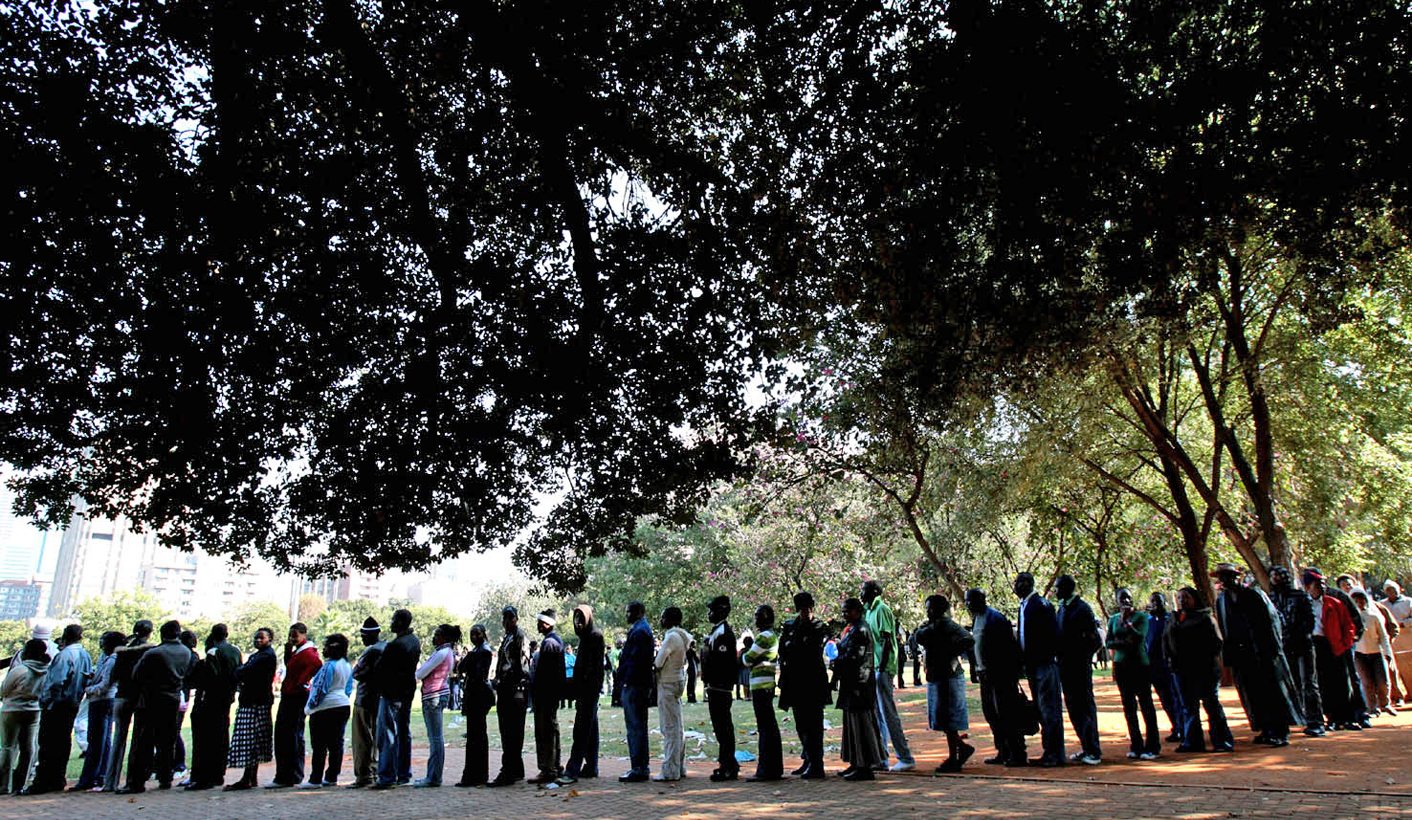 The date of South Africa’s fifth municipal elections is unlikely to be announced for at least another month with another round of registrations scheduled to take place on 9 and 10 April. Once the elections are proclaimed, the voters’ roll will be closed. There will be many differences between these elections and previous polls. Apart from the threat to the ANC’s dominance in urban areas, this election will take into account big issues: financial management of municipalities, service delivery, corruption, the drought, public transport, housing and job opportunities for the youth. And if the ANC has its way, Jacob Zuma should not be the issue. By RANJENI MUNUSAMY.

An interesting feature of the past weekend’s voter registration campaign was that the ANC’s posters and t-shirts did not feature pictures of its leader, President Jacob Zuma, as they normally do. While pictures of Mmusi Maimane and Julius Malema were plastered around the country on Democratic Alliance (DA) and Economic Freedom Fighters (EFF) campaign material respectively, the ANC used generic pictures and the party colours rather than the face of the president. Even in Zuma’s home province KwaZulu-Natal, where he previously enjoyed a high level of popularity, the ANC played it safe.

This time around, it is unlikely that Luthuli House will force its structures to project Zuma as the face of the ANC’s campaign. His dented image and growing unpopularity in and outside the ANC is now a liability to the party. He is now the biggest campaign asset of the major opposition parties. Mercifully for the ANC, the ballot papers for local government elections do not feature the face of the party leaders. The district and local council ballot papers have the names and logos of the parties, while the ward ballots feature the candidates’ names and party logos.

ANC leaders’ reluctance to defend Zuma as they did previously is becoming more noticeable. It has been most apparent in Parliament, particularly in last week’s motion of no-confidence debate when ANC MPs chose to attack the opposition rather than present evidence of Zuma’s track record and achievements.

In an interview on The Justice Factor on eNCA on Monday night, ANC secretary general Gwede Mantashe was asked when the party would recall Zuma because of his poor leadership. Instead of attacking Justice Malala for the question, as Mantashe is prone to do, he responded that it was not his decision to recall Zuma but that of the ANC.

The commotion resulting from Zuma’s firing of Nhlanhla Nene as finance minister and the developments in the Constitutional Court when he suddenly offered to pay back the money for the Nkandla upgrades has disorientated the ANC.

After last October’s National General Council (NGC), the ANC had a renewed plan of action to tackle the local government elections. In the report summing up the NGC, Mantashe said the following:

“The 2016 local government elections are upon us. We must embark on the campaign energetically to defend our base, to retain our majority and to win overwhelmingly. Concerted effort must be made to defend and retain the metro cities that are targeted by the opposition. By doing so we would have won the psychological battle our opponents seek to impose on us.”

He also said that delegates “showed concern about the integrity and standing of the ANC in society”. “They directed to turn this situation around and improve our standing,” Mantashe said. This turnaround has now suffered a serious setback as a result of the ANC’s embarrassment over the Nkandla backflip and the damage to the economy as a result of Nene’s axing.

The ANC will launch its national election manifesto on 16 April in the Nelson Mandela Bay Metro, where it faces the greatest danger of losing control of the municipality. The EFF manifesto launch will be on 30 April at Orlando Stadium. The date and venue of the DA’s launch has not yet been confirmed.

The past weekend’s voter registration drive took the national voters’ roll to 25,516,576, a growth of over 600,000 voters. According to the Independent Electoral Commission (IEC), over three million South African voters visited their voting stations over the past weekend to register for the first time, re-register and to update their registration details.

The IEC says 78.6% of the new registrations were people under the age of 30. The age group with the highest number of voters are men and women between the ages of 30 and 39 – over 6.3 million – followed by people between the age of 20 and 29 – 5.4 million. This means that people with little memory of the Apartheid years dominate the voting numbers.

The percentage of voters who would remember the ANC’s glory years during the liberation struggle is diminishing. The ANC therefore cannot rely on its history and parade of struggle heroes, as it has done in the past, to help maintain its electoral dominance.

There are likely to be major issues that will drive this year’s election debates, including the ANC’s delivery track record and financial management of municipalities. Communities will be raising issues such as corruption, service delivery, housing provision and public transport. When it comes to the youth, parties will have to provide answers on access to higher education, skills training and job opportunities.

The drought, food security and the increasing cost of staple food is likely to cause more restlessness amongst voters and make campaigning a lot more difficult. Campaigns built on the usual set of big promises will be difficult to sell in areas with water and food shortages.

One major issue that is likely to dominate the local government election campaign is race and its impact on levels of inequality and disproportionate participation in the economy. The ANC and the DA are likely to struggle with this issue. This will be the first time that the EFF will participate in the local government elections and is likely to translate its aggression on issues such as land and economic freedom at local level. The growing activism of students in institutions of higher learning will also present a new dimension on the campaign trail.

The last registration weekend in April could push up the voters’ roll to over 26 million, meaning that parties will have to work a lot harder to target a larger group of voters than in previous elections.

Thanks to the fluidity and robustness of politics, South African society is certainly more engaged in the upcoming election. After August, the political landscape at local level could look significantly different than it is now. The outcome of the election will also be the curtain raiser to the succession battle in the ANC ahead of its 54th national conference next December.

The 2016 elections give South Africa’s voters the opportunity to make their voices heard on a number of issues, particularly what they expect of their elected leaders. Sometime soon, probably in August, we will find out what they really think about the way their municipalities have been run over the past five years, and possibly put our national leaders on notice. DM