Jozi’s Les Miserables: Forced to eat from the dumps 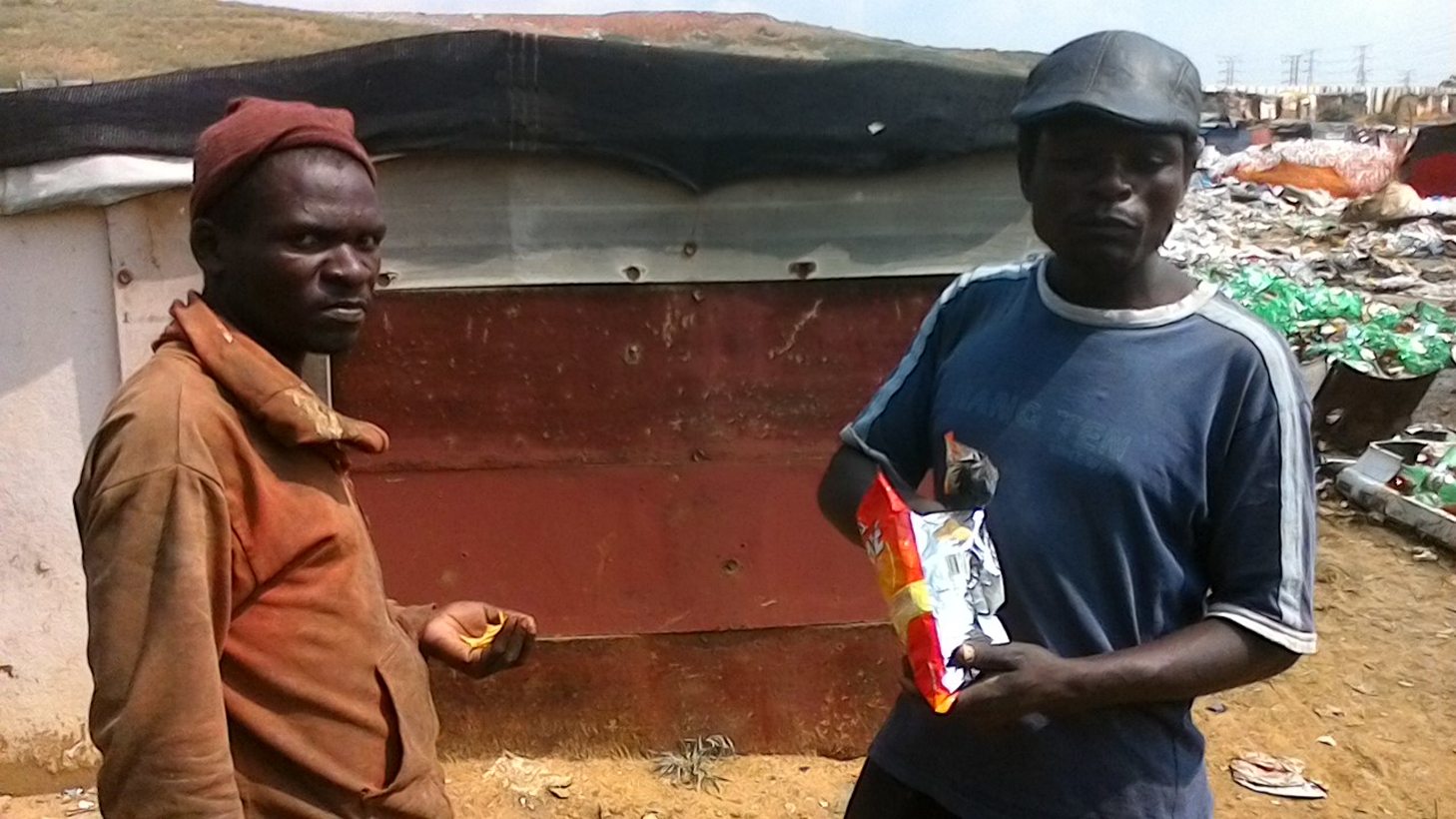 A small community staying at the dump in Devland, Johannesburg is increasingly struggling to cope with their dreadful living conditions. If it’s not poverty, it’s disease and if it’s not disease, it’s harassment by Metro police. Here is a community that not only lives on a filthy dump and feed from there, but is on the verge of perishing from hunger and disease. By BHEKI C. SIMELANE.

Hardly half an hour into the Daily Maverick’s visit to the area, the reality of the terrible living conditions set in. One resident, a middle-aged man named Derrick Tsana, had stumbled upon a bag of crinkle-cut chips that was already open, apparently because of its exposure to conditions too extreme for their storage. He had come across the bag underneath the heap of rubbish on which he and about 300 other families live.

Suddenly the neighbours were embroiled in a scramble for the chips. Women tossed their babies aside and grabbed Tswana who had made the delightful discovery. He ended sharing them with a starving colleague. “They are still fresh,” said one woman. “They only expired on 03 December 2015.”

Either way, it’s not as if the expiry date makes any difference because using long-expired items is common in the area. The chips could have been dumped with the rest of the rubbish a few days or a week ago, residents say. It was not unusual for residents to use expired items from the rubbish, as most fed from it. And as soon as the mothers had managed to grab a few packets each from Tsana, they popped the plastic bags open, threw a few chips in their own mouths and quickly passed them on to their kids.

Not only do residents here have to constantly defy Metro police who want them out of the area, they have to fight disease, poverty and unemployment. Most residents, male and female, collect waste recycle material for a living, from which they earn on average R17 a day. Normally it takes them about a week to fill their trolleys, from which they make R120. They live on the same dump whose rubbish provides for their families, and it’s squalid. Not a single government service is provided here. The area is not fit for human inhabitation, it most probably doesn’t appear anywhere on the Gauteng map as a dwelling place, no one should be staying here and the people know that, but say they have nowhere to go.

The Devland dumpsite is now a village of about 300 shack-like structures by desperate residents.

Matsiu Ramonti, 36, was boiling water from a 5-litre tin of baby milk when the Daily Maverick arrived at her doorstep. She used the boiling water to soften her baby’s porridge, which had gone hard while an older baby, her neighbour’s, ate rice and fried egg with both hands. Ramonti said her baby had never been to a clinic or hospital despite chest discomfort, because she did not have money. She said most of the people living in the area were a community from Lesotho, which was still growing.

“Surely my baby’s illness is often a result of the conditions we live in here. You people are always writing but when you come back here you come empty-handed. Bring us some food, we are starving, bring us some clothes,” Ramonti said.

Communications Specialist at the City of Johannesburg Virgil James said the city had tried to meet the community but there seemed to be divisions among them regarding representation.

Mamafabatho Mokoma, from Lesotho, said she risked her health to come and live there because it’s free and she can make a living from the dump. Mokoma said her health has been very poor. She had been to clinics and had been warned about exposing herself to the filth.

Mokoma added: “We are living miserable lives here and on top of that Metro Police harass us by conducting random raids and evicting us. It is during these random raids that they steal our hard-earned money whenever they come across it. The last time the police came to harass us was in December 2015 and when we tell them we cannot leave because we have nowhere to go, they tell there is nothing they can do.”

Residents said everyone from police to officials were telling them to go and live in nearby Freedom Park but they cannot afford the rent. Freedom Park residents have won an often brutal war for RDP houses.

When the Daily Maverick spoke to Johannesburg Metro Police Chief Wayne Minnaar after the Metro Police visit to the area in December he said he was not fully briefed about the raids at the time.

Makemelo Bohloko, 26, has three kids aged 10, seven and eight months. The older two are old enough to attend school but have never set foot in a classroom. Kemelo, 10, said she hated living at the dump because she frequently experienced violence. She said she would love to go to school one day.

“I cannot let my older children go to school because they have to look after my baby while I’m at work and besides, school would be too expensive,” said Bohloko.

While it’s frightening that people from Lesotho find themselves living this sort of life in a foreign country, it’s even more frightening that they’d travel this far to do this kind of job for so little. Others come to be with their husbands and end up in the waste-collecting business to supplement the little their men make. Most residents said they have resigned themselves to their circumstances.

Virgil James says almost everyone staying at the dump was a foreign national whose legitimacy could not be easily established.

“This is quite a problem for us. We have had meetings with them, at least those that attended as there are some divisions among them regarding representation. Social and Development and Home Affairs were out there but because they are 99% foreigners, it was difficult to establish their legality because they did not feel obliged to be available. Obviously they fear deportation but Home Affairs need to take the initiative, supported by Saps and JMPD to remove them.

“We would then fence off the area and monitor it to ensure nobody else moves into the area. We also summarily just cannot go out and demolish, because there are children involved, some of whom are apparently registered in surrounding schools and creches and cannot come home to nothing,” James said. DM

All photos by Bheki C. Simelane.