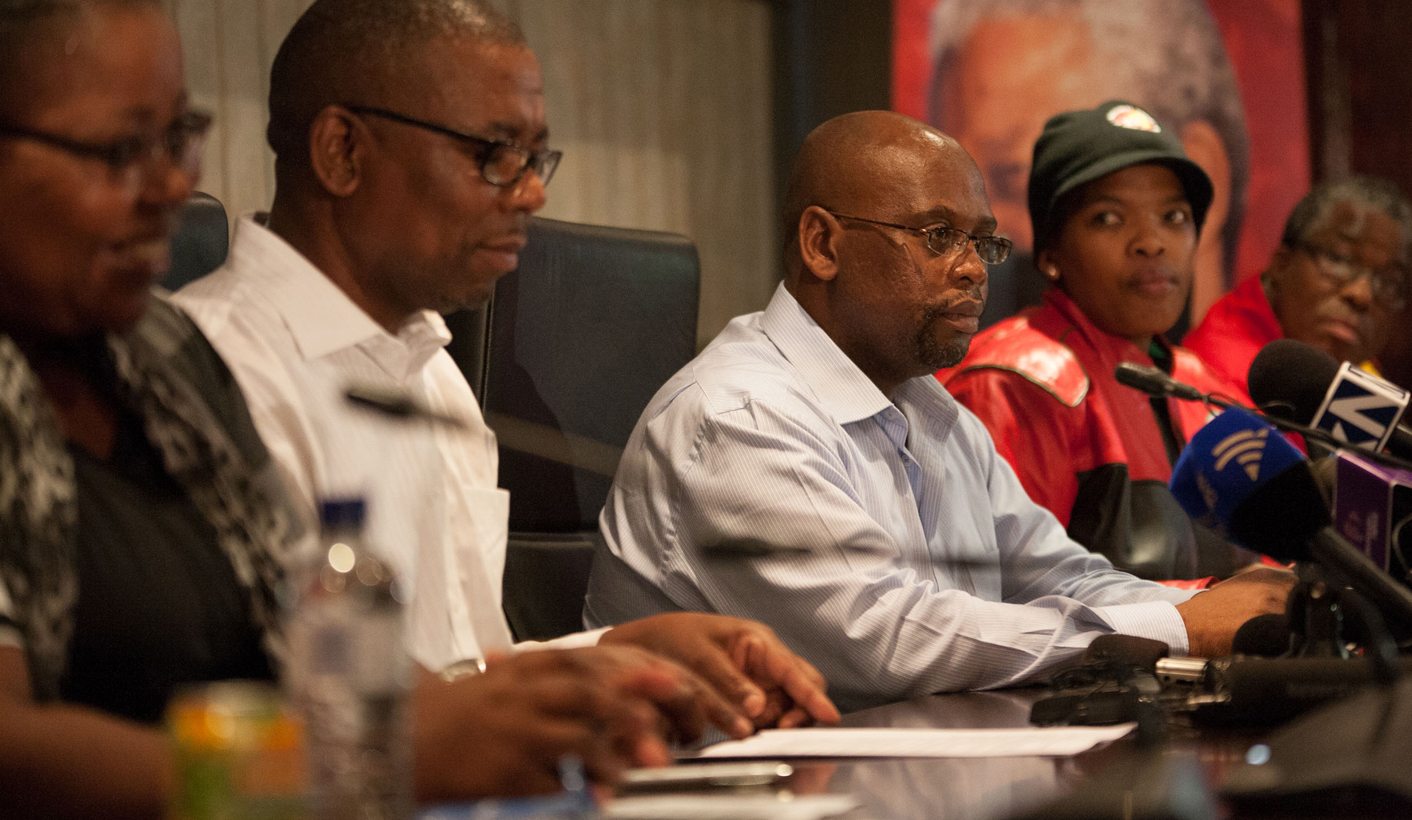 There was a time when those mediating the conflict in Cosatu believed the only way to navigate out of the crisis would be for S’dumo Dlamini and Zwelinzima Vavi to step down as president and general secretary respectively. Cosatu took another route. It dismissed Vavi earlier this year and, on the first day of its 12th national congress, re-elected Dlamini for a third term as president. It was a triumph for the dominant faction in Cosatu. But the minority faction staged a fight back that saw heated debates for most of day one, which ended with a rather baffling speech by President Jacob Zuma. By RANJENI MUNUSAMY.

The Food and Allied Workers Union (Fawu) only has 160 delegates out of 2,500 delegates attending Cosatu’s 12th national congress in Midrand this week. For a relatively small contingent, it certainly is making its presence felt.

Fawu, with the backing of the SA Catering, Commercial and Allied Workers Union (Saccawu), which is also represented by 160 delegates, objected to the credentials report, therefore holding up the start of the congress. Cosatu president S’dumo Dlamini only delivered the opening address late Monday afternoon. Fawu and Saccawu’s objections also kept President Jacob Zuma in a holding room at the conference venue for over an hour earlier in the day, after which he left and returned Monday evening to address delegates. This delayed Zuma’s flight to Angola where he and State Security Minister David Mahlobo are visiting President Jos? Eduardo dos Santos.

It is customary for the ANC president and South African Communist Party (SACP) general secretary to address Cosatu’s national congresses. It is also usual for them to talk up the alliance partnership and why they all need each other.

But after all the turbulence Cosatu has experienced in the past three years, including the expulsion of its biggest union and dismissal of its general secretary Zwelinzima Vavi, you would expect a more targeted message. Part of the reason the fight with metalworkers’ union Numsa arose was over electoral support for the ANC and whether the dominant partner in the alliance was still serving the working class agenda.

It therefore fell to Zuma to provide clear political direction to help stabilise the federation and give reassurances that the ANC was still the political home of Cosatu’s members. Zuma’s message was, however, a puzzling mishmash of the history of the alliance, an indistinct appraisal of class differences and warnings about invisible enemies plotting against Cosatu and the alliance. He also said Cosatu should pay more attention to the unemployed rather than focussing on their own members.

Zuma said the alliance was born out of struggle not through “clever people” deciding it was needed. He said the ANC did not intend to get rid of class divisions in society but was working to create a system “for some sort of harmony to balance things”. Considering that his audience was a house full of trade unionists, many of whom were also members of the SACP, this message could not have gone down well: “People forget the ANC is not fighting for socialism. The ANC is fighting for national democracy”.

To add to his confusing message, Zuma said there was a “dictatorship” from the capitalist class that, amongst other things, set bread and petrol prices without “discussing” it with anyone.

Zuma spent a large part of his address urging unity in Cosatu. He had walked into the conference hall on Monday evening as the fight was raging over nominations for the top six positions in Cosatu. Zuma warned that internal battles weakened Cosatu and the alliance. “Those who oppose us gang together,” Zuma said. “That is why we need to unite to fight the onslaught”.

“If you fight amongst yourselves, you don’t understand the enemy,” he told the delegates. “You can’t have the luxury of disunity.” He rounded up his address advising Cosatu: “You should know who are your real friends and comrades.”

Cosatu delegates will vote on only one top six position, that of deputy general secretary. Dlamini was nominated unopposed to retain his position as Cosatu president, as were first and second deputy presidents Tyotyo James and Zingiswa Losi respectively, and treasurer Freda Oosthuizen. Bheki Ntshalintshali was nominated unopposed for the position of general secretary, the post left vacant by Vavi’s dismissal.

Fawu, supported by Saccawu, put up a protracted battle for nominations for all the positions to be re-opened. This meant that they wanted to put up candidates to stand against the incumbents, who clearly have the support of the majority of congress delegates.

Earlier in the day, Fawu and Saccawu objected to the credentials report, questioning the inclusion of Losi and new metalworkers’ union Limusa. After a long and heated debate, the matter was put to a vote. The dominant faction won by 1,962 votes with 331 against and 187 delegates abstaining.

This did not deter Fawu. By Monday evening they were arguing for a second vote for the reopening of nominations. They seemed to believe that if voting was done in secret, rather than an open count as had been done earlier in the day, delegates from other unions with support them. Fawu and Saccawu were eventually defeated and the first day of the Cosatu congress closed with five of the top six positions confirmed.

There appears to be many more battles to come from rebel unions whose future in Cosatu remain uncertain. Two unions did not pitch at the congress at all. Footballers’ union Safpu was a no show while the South African State and Allied Workers Union (Sasawu) announced in a statement on Monday afternoon that they had decided to withdraw from the congress. Sasawu said it had written to Dlamini informing him its decision. The reasons given were the hostilities that were prevalent at Cosatu’s July special national and the fact that they were asked to contribute funds for exhibition tables at this week’s congress.

There is clearly unhappiness in some Cosatu unions with its leadership and direction but there is no common approach or strategy as to how to channel this. What will happen over the next three days is therefore uncertain.

For now, Dlamini is firmly in the driving seat, having being elected unopposed, and with a new like-minded general secretary at his side. But the turbulence in Cosatu is far from over, and there is a real possibility that by the end of this congress, other unions might be ready to take the leap out of the federation. DM