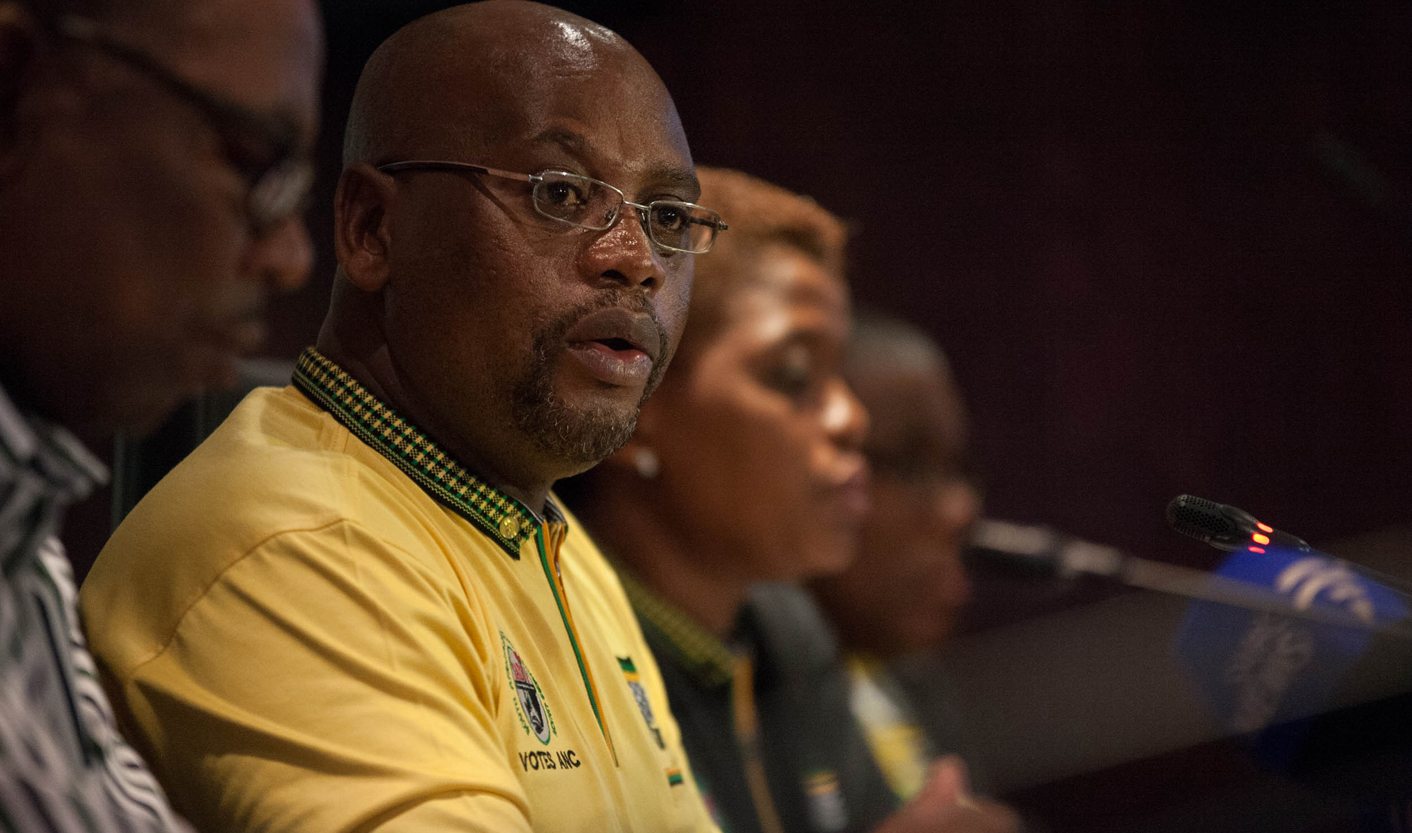 Next week, trade union federation Cosatu will elect a new leadership at its 12th national congress in Midrand. Cosatu president S’dumo Dlamini used to be the man very much in the shadow of Zwelinzima Vavi. Now he takes centre stage, having kept his grip on the federation through its most turbulent period, leading the charge to fire Vavi and overseeing the expulsion of Numsa. Dlamini also serves in the top structures of the ANC and SACP, and is accused of being conflicted. He spoke to RANJENI MUNUSAMY about some of the behind-the-scenes intrigues, how the relationship with Vavi broke down and whether Cosatu still benefits from its alliance with the ANC.

S’dumo Dlamini is often accused of being President Jacob Zuma’s lackey. He is seen to be an uncritical supporter and apologist, whose role is to keep Cosatu in line to back the ANC. He is also accused of acting under the influence of South African Communist Party (SACP) general secretary Blade Nzimande to deal with detractors in Cosatu.

In an interview on Thursday, Dlamini points out that before he became the president of Cosatu, “you could not separate Blade and Vavi”. Vavi and Nzimande also had a close relationship with Zuma at the time. “Where was S’dumo in the scheme of things?” he asks. Dlamini may not have been a key player then, but he certainly is now. He sits on the ANC national executive committee as well as the SACP central committee. But, he says, he always represents and upholds Cosatu’s positions in all these structures.

In a monumental battle inside Cosatu, Dlamini led the dominant faction that forced out metalworkers union Numsa and Vavi.

Vavi and Numsa general secretary Irvin Jim are boisterous in expressing their anger and grievances over their ousting. Vavi often tells how emotional he was last November when the Cosatu central executive committee (CEC) voted to expel Numsa. He said it broke his heart and he had to hold back his tears when he saw Numsa’s leaders leave the meeting.

Dlamini, on the other hand, rarely reveals what happens behind closed doors or his personal feelings on Cosatu battles. He is amused when asked whether he shared any of Vavi’s pain from that night. “But Vavi wasn’t even there when they left,” he says. “When the voting was happening, he went up to his office. He said he didn’t want to be in the meeting when the decision was taken.”

Dlamini explains that after a marathon session that went until the early hours of the morning, the CEC had to vote on whether a decision on Numsa be postponed to another meeting or to expel them. He said as general secretary, Vavi had to set up the voting process. But he got up and left. The deputy general secretary Bheki Ntshalintshali then facilitated the vote.

“It was just quiet when the results were announced. Jim then asked ‘President, what do we do?’ I then had to explain ‘Numsa, you are expelled. You still have the option to appeal.’ They collected their bags and walked out.

“Vavi was not there,” Dlamini repeats.

The camp warfare in Cosatu almost crippled the last national congress in 2012, before a settlement was reached behind the scenes that neither Dlamini’s nor Vavi’s positions would be contested by opposing camps. But according to Dlamini, the trouble started long before then. He said he faced a “barrage of attacks” from Vavi and Jim after a statement he made at the ANC’s January 8 rally in 2010. Dlamini had said at the rally that Cosatu would be fully behind the ANC in the 2011 local government elections and “attached no conditions” to its support.

Dlamini then had to face an internal investigation because of his statement, as he was accused of selling out to the right wing in the ANC. A five-person committee found that he did not transgress any Cosatu positions with the statement. But the relationship with Vavi went downhill after that.

Dlamini also revealed an intriguing story about the run-up to the ANC’s Mangaung conference in 2012. He said Cosatu decided to back Zuma for president and wanted Kgalema Motlanthe to remain as deputy president. The Cosatu CEC mandated Dlamini and Vavi to meet with Motlanthe and convince him to stay on as Zuma’s deputy, avoiding contestation for the position of president. Dlamini said because Vavi had a closer relationship with Motlanthe, he asked him to set up the meeting. However, it never took place.

Stories then emerged about Numsa’s leaders travelling to Nkandla to meet with Zuma, where they proposed that Vavi should be ANC deputy president. Zuma apparently told Numsa that Vavi had to tone down on the rhetoric in order to be palatable to the ANC membership. The matter was left in abeyance. Dlamini’s suspicion is that Vavi stalled on setting up the meeting with Motlanthe because he had a vested interest. Eventually Dlamini made Cosatu’s position public, which apparently angered Motlanthe who questioned why the federation had not spoken to him first.

At the time of the Mangaung conference, Vavi seemed highly disillusioned and only attended one day of the five-day meeting. He also infuriated the rest of the Cosatu leadership by tweeting after the elections about how tragic it was that people like Motlanthe were completely out of the ANC leadership.

Two months later, in February 2013, the Cosatu CEC began the investigation into the sale of the old Cosatu building and purchase of the new headquarters. Vavi and his supporters saw this as a conspiracy to remove him from his position after the attempt at the 2012 congress failed. Thus began an open and brutal war that threatened to split the federation. A special national congress in July this year finally saw Dlamini’s group overpower and defeat the unions loyal to Vavi and Numsa, and crushed any hope of them returning to Cosatu.

On Thursday, Vavi was still complaining about the conspiracy against him during a media briefing where he announced he would not be appealing his dismissal at the Cosatu congress.

“Like all those, who lose themselves in wishful thinking, and with an exaggerated sense of self importance, we were not surprised by his sanctimonious catharsis and self pitying rants. It is [a] sign of a camouflaged surrender by a man, who is struggling to adjust and define himself outside of Cosatu,” the statement read.

Dlamini says going forward, Cosatu has to be careful not to fashion itself around individuals who become bigger than the federation. “That is exactly the pitfall that caused the challenges we had. We allowed such a tendency where individuals rise above the organisation,” he said.

Dlamini explains that when Vavi represented Cosatu, he had a way of phrasing his opinions such that they were viewed as that of the federation’s. “No Cosatu CEC would call people hyenas. No ways. It is his own invention,” Dlamini said, referring to Vavi’s well-known denigration of people who feed off state tenders.

While Vavi is now mooting a new independent trade union federation, Dlamini believes there are still advantages to Cosatu remaining in alliance with the ANC. On the issue of e-tolls, for example, Dlamini says Cosatu’s campaigns and marches, as well as discussions with the ANC, helped to move the system from where it was to where it is now with discounted rates and concessions.

Cosatu put the breaks on government’s intentions to tax pensions and its campaign for a national minimum wage has now put the issue firmly on the table with figures now being debated, Dlamini said. He believes that through alliance channels, a potentially devastating public service strike was avoided. However Cosatu and the SACP are still frustrated that their objections to sections of the National Development Plan have not been taken seriously by the ANC and government.

The functioning of the alliance, the state of the working class and the use of money and patronage to influence leadership in the ANC will be among the issues discussed at the four-day congress next week. Dlamini is particularly pleased that the unions that had sided with Numsa and had boycotted Cosatu meetings had returned to the fold and will be participating in the congress. But, the Cosatu congress will have to contend with declining membership and finances, and the federation’s waning organisational ability.

Dlamini believes it is time to move on from the Vavi era and he advises his former comrade to do the same. “If Vavi was working to rebuild and reconstruct himself as a leader, he was going to do well. His downfall is that he preoccupies himself about Cosatu. He must focus on new possibilities in life,” Dlamini said.

Unlike the last elective Cosatu congress three years ago, Dlamini has nothing to fear this time. He has regained control of the federation and vanquished his detractors. Vavi on the other hand will resent the victory of his detractors, and has to finally confront the reality that the federation that he was the face and voice of for so many years now belongs to his enemies. DM