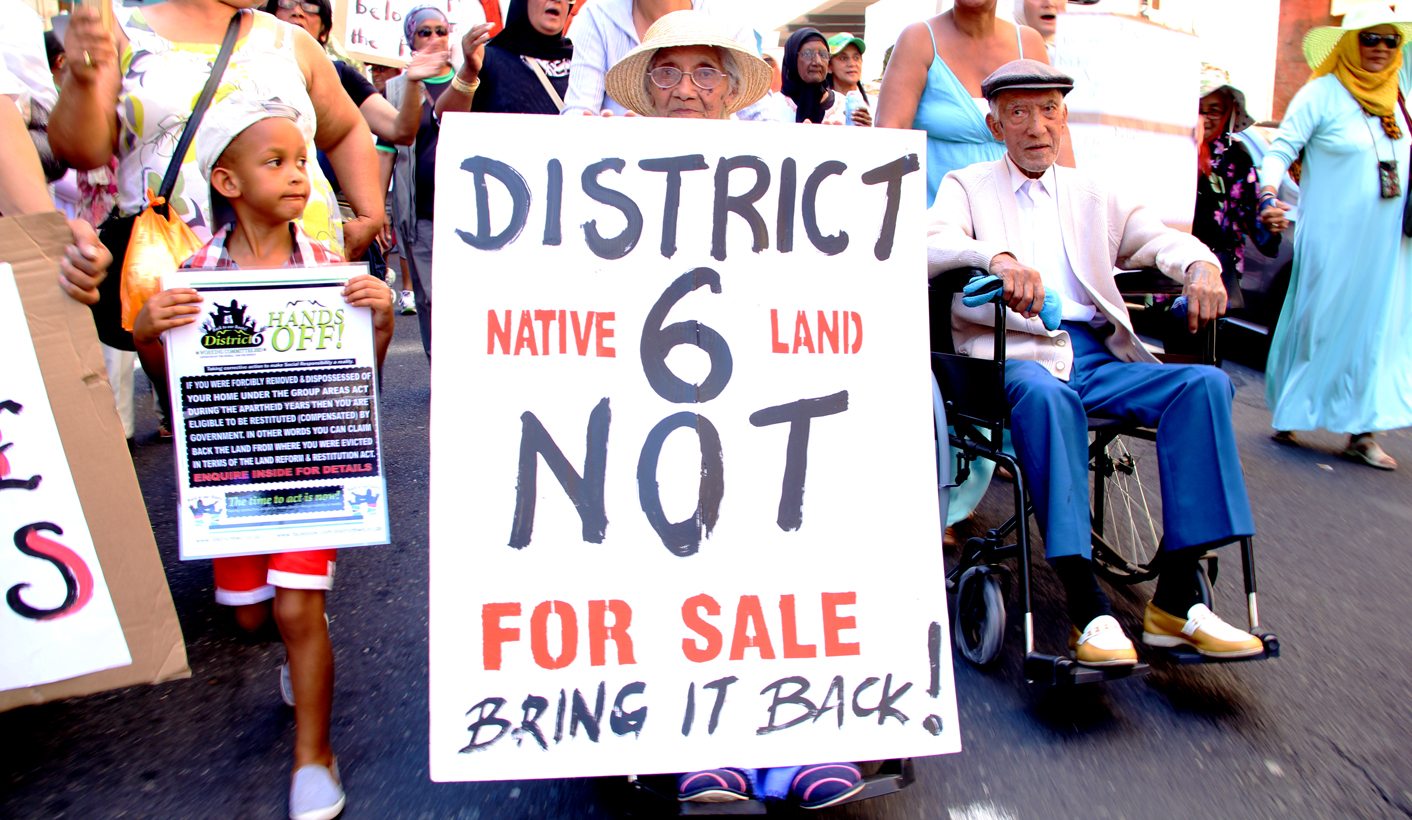 Lead by two of District Six’s oldest surviving evictees, communities from across the Cape Flats marched on the mayor’s offices on Wednesday. They demanded a dignified return to the city for families forcibly removed during apartheid. By Daneel Knoetze for GROUNDUP.

Lead by two of District Six’s oldest surviving evictees, communities from across the Cape Flats, marched on the mayor’s offices on Wednesday. They demanded a dignified return to the city for families forcibly removed during apartheid. Organisers say that a much broader campaign against continuing trends of segregation and exclusion, which continue to plague the metro, must be the end goal.

Catherine and Cyril Wagner, aged 91 and 92, both in wheelchairs, were pushed ahead of about a hundred claimants, and supporters singing traditional Cape Malay songs as they snaked from the Cape Peninsula University of Technology (built on District Six land), through Adderley Street, and onto the Civic Centre. Walking next to the elderly couple, and at times holding Catherine’s hand, was the march’s youngest participant, four-year-old Yassiem Beckles, whose grandmother, Sharfia, Beckles was a neighbour of the Wagners before the removals.

“It is wonderful to have a young child march with us in our old age, because this is a fight for our futures as well as for now. But, it is also disappointing. When I was that age in District Six life, was good. There was nothing for us to march for, I had everything I desired,” said Catherine.

She had married Cyril, a young soldier from the Bo Kaap, in 1944. The newlyweds moved into Catherine’s family home at 213 Hanover Street, an area that was the cultural heart of the now demolished neighbourhood. There they lived for thirty years, before pressure and evictions by the apartheid government, lead them to accept an offer to relocate to a home in Silvertown, Athlone.

For the Wagners, the date is unforgettable: September 27, 1973. It was Catherine’s 49th birthday.

“It was really a very sad day for us. It was my saddest birthday. In Hanover Street we lived alongside people from many different backgrounds, in peace. Especially Muslims and Christians were very close. It was as though we were a family,” she says.

“We won’t forget that. And even though we are old now, we still have patience. I would like to come home to the place where I was born before I pass away. My husband and I are here because we want to say to the mayor that we want a home in District Six again. We have waited for long enough.”

Officially, the Wagners have waited for fifteen years for their land restitution claim to be processed, and acted upon. They lodged it in 2000.

These kinds of disappointments with the restitution process, are among the central grievances that District Six Working Committee chairman, Shahied Ajam, raised with Cape Town Mayor, Patricia De Lille’s assistant, Wilfred Solomons-Johannes, as they met on the steps of the Civic Centre, at around noon on Wednesday.

As Solomons-Johannes accepted a sprawling memorandum – a chronicle of years of alleged mismanagement by various spheres of government, and organisations involved in the restitution process – he was jeered by marchers. They questioned why Mayor De Lille sent a subordinate to meet them.

In a response later on Wednesday afternoon, Deputy Executive Mayor, Ian Neilson, said that the City had stood in “joint determination” with the Western Cape Government, and the national Department of Rural Development and Land Affairs (DRDLA), to see the development of District Six proceed. Yet, he stressed that this redevelopment, and the determination of legitimate beneficiaries was primarily the responsibility of national, and not local, government.

“Substantial progress has been delayed due to the impact of various special interest groupings, including that of the District Six Working Committee which has been a partner in public engagement. It is now time to stop driving narrow agendas and do what is right for the broader community,” he said.

But Ajam says driving a “narrow agenda” is the furthest thing from the future plans of the District Six Working Committee.

“We start with District Six, but this is about much more than that. For two decades since the end of apartheid we have noted that our government’s policies are not concerned with bringing working class black and coloured families back into the City,” he said.

“District Six was full of black, and coloured, and Jewish and white people living peacefully together, free from the drugs and gangsterism that define many of our children’s futures today. We lived next to a Xhosa family, right by the city, when I was a child. Cape Town can be like that again, if we all stand together to say that we no longer accept segregation. Such a coalition can include many people, not just those from District Six.”

Walking ahead of the Wagners was Wayne Gorman, a tenant of De Waal Flats, situated above District 6. He and many of his fellow tenants are concerned that they will be relocated as the area gentrifies. “I have lived here for twenty years and I do not want to go far away,” he said when asked why he had joined the march. DM