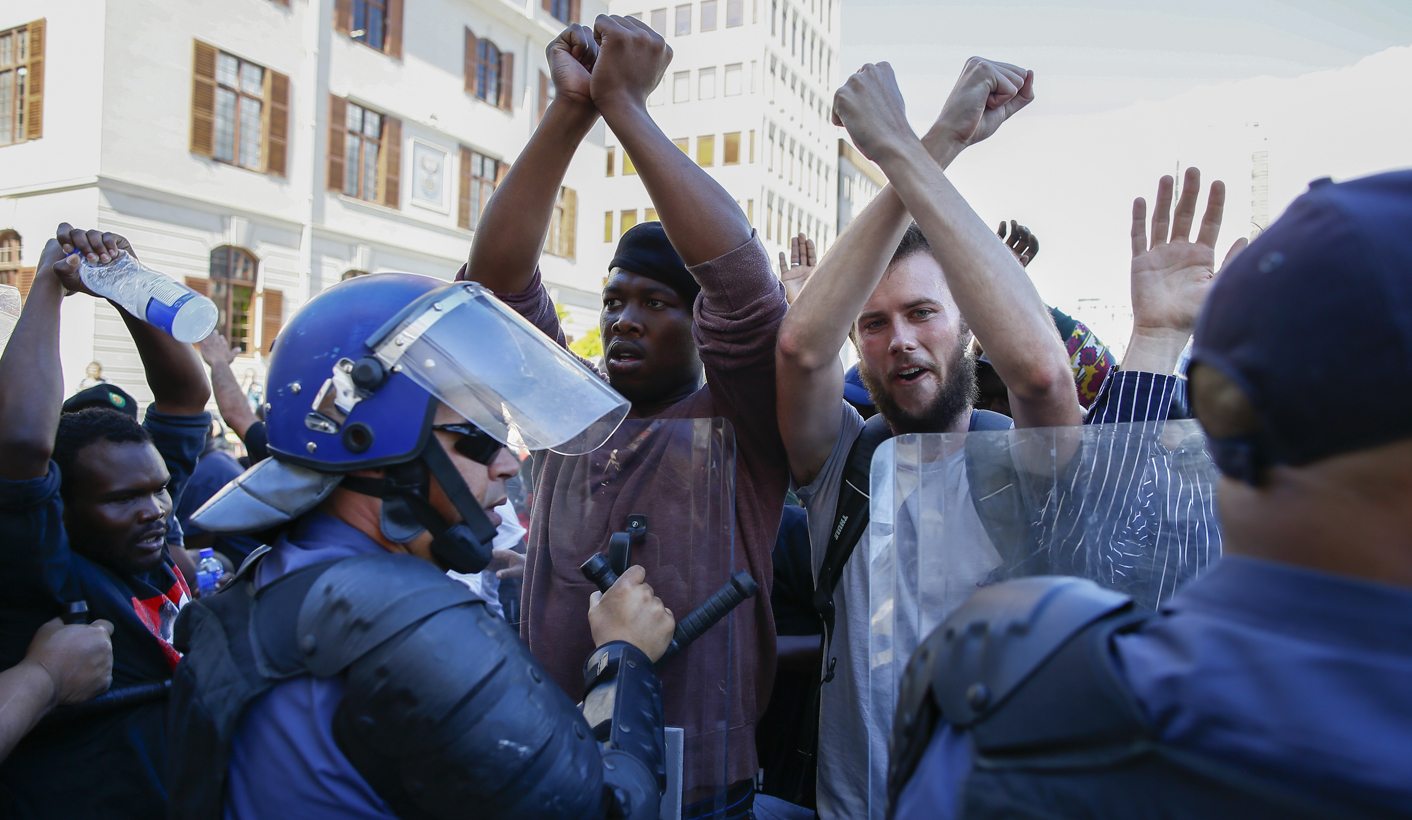 The overriding impression that remained with me after several days of reporting on #FeesMustFall is this: Everything I said, as well as everything I read, was incomplete. As much as I wasn’t everywhere, neither was anybody else. The fact is that we, as reporters, bring you the most dramatic events of the day. We distil what we feel are the most important elements, which are often the ones that stick out in our memories at the end of the day or which we believe it’s most important for you to know. But there's always so much more. By MARELISE VAN DER MERWE.

Journalists, when reporting on an event, like to use the term ‘covering’. They are ‘covering’ a certain topic or ‘covering’ the protests. It’s a misnomer. There is nothing about it that one can cover. At best, all one can give is a snapshot of a specific moment in time.

One of my simultaneously most loved and hated activities, after being at an event that numerous media ‘cover’, is to read what other people said about it. I love it because I love seeing the perspectives of others; the nooks and crannies I didn’t get to; the different words and pictures the country’s most creative minds came up with to describe something cataclysmic. I hate it because I find it acutely anxiety-provoking. What if I missed something? What if I was on the south side when there was an earthquake in the north?

My colleague, Shaun Swingler, corroborated this when I brought it up. It was so much better working in a team, he agreed, where there were just more eyes and more ears available to cover all the ground. You still can’t be everywhere, but you can at least be more places.

Still, the overriding impression that remained with me after several days of reporting on #FeesMustFall is this: Everything I said, as well as everything I read, was incomplete. (This is a sense I’ve had since the first faeces were tossed at Rhodes’s statue and the calls were made for the University of Cape Town to transform.) As much as I wasn’t everywhere, neither was anybody else. It’s very easy to create homogenous masses out of the major roleplayers in the story: the government, the students, the police, the media. Who are these collectives? The last time I checked, they were made up of individuals.

The fact is that we, as reporters, bring you the most dramatic events of the day. We distil what we feel are the most important elements, which are often the ones that stick out in our memories at the end of the day or which we believe it’s most important for you to know. But firstly, these are our impression of what happened, and secondly these are the events that shocked us or gave us pause. And whatever one chooses to believe about the neutrality of the media, this is always a subjective decision. When it’s 11pm and our feet are sore from trudging around with our laptops and cameras all day and we’re trying desperately to make sense of what happened while the sub-editor is still alive, we don’t tell you of the many hours where very little happened; where speeches were made and people sang and it was largely festive. We don’t tell you of the policemen who just stood there, looking hot and tired and just as frustrated as the protesters. We don’t tell you of the moments when, in that wonderfully South African way, the local homeless joined in the dancing and greeted both the protesters and the policemen by name – because, of course, they all knew each other.

I tried to bring a few of these human moments into my reporting: the moment when a protester asked a policeman why he was trying to stop them, and he waited until nobody was looking and thanked her for what she was doing; the donations and medical assistance from volunteers; the mediation from community leaders when protesters were seeking shelter amid the stun guns and tear gas. I was happy when it was reported that students cleaned up their campus after a protest – it drove home, I thought, some of the spirit of the thing. One University of the Western Cape (UWC) student told me, in response to the perception of protesters as hooligans and vandals: “We are not planning to destroy the campus. We will be occupying the library next, so that it stays open for longer, so that we can study harder. We want to succeed …”

The vast majority of the students were the very opposite of hooligans and vandals. In as much ground as I could cover as one person, I can confirm this – even on that crazy day in Parliament. That said, there were some rogue elements during the course of the protests, as one can always expect. As student leader Mangaliso Nompulo put it, “It only takes a few souls to disrupt on either side.” We did get word of police vehicles being damaged near the UWC campus and of bottles being thrown in Parliament. Other reports claimed there were some students who were intoxicated. Nonetheless, as an eyewitness, the overwhelming majority of the protesters I encountered were calm and peaceful, and their behaviour did not warrant such a heavy-handed police response. The announcement of an investigation into police conduct was a strategic approach.

Nonetheless, I have to ask – how many investigations and inquiries are we going to have in this country before we start thinking about crisis prevention rather than damage control? I am not sure it is productive to demonise police when it is clear that there is a lack of strategic direction. South Africa is a country where a great deal of protests occur, and if the student protesters are to be believed, they are only getting started. It’s probably a good idea to be prepared.

Police Minister Nathi Nhleko defended the actions of police on Saturday, and while this has drawn widespread criticism, at least he didn’t pass the blame onto the officers when the problem most likely starts at the top.

The police response was unacceptably heavy handed. But every police officer is not a monster.

Lastly, an observation: When the shit hits the fan, one’s true beliefs often come to the surface. Many South Africans rallied, offering support to the protesters. Others carried on drinking chardonnay in the sun as though nothing was happening. Many showed stronger feelings about the Springboks’ loss than about the state of education. And others revealed an oily racism wrapped in a crispy confirmation bias, as though this were a struggle of black savages making unreasonable demands out of sheer ignorance. One reader went as far as to mock the accents of some black South Africans, intimating that the next protests would be for “free chicks” and “free computaz”. Others were not as overt, instead shaking their heads about hooliganism and idiocy.

But this was not just a black struggle, and South Africa’s protests are, by international standards, often average and sometimes tame. Just in recent history, some of the worst student protests took place in the First World. Cast your mind back to the 2010 student protests in the UK (which, although they resulted in violent clashes with police, didn’t result in a cut in tuition fees). Moving to poorer countries, we’re even more typical: consider the mass student takeovers of schools in Argentina in 2012; and the Chilean protests of 2011, which went on for two years. Burma’s students, also in education-related protests, clashed violently with police in 2014. Student protests the world over are associated with two things: volatility and change. Outside of South Africa’s own history of significant student protests, let’s not forget the groundswell of international protests of 1968.

Something the #FeesMustFall protests illustrated is that although wealth is still largely distributed along racial lines, perhaps the older generation thinks far more along racial lines than the born-frees do. The youth are showing us how it’s done. They are using our tendency to label against us. Outside Parliament, the white students formed a barrier, knowing they were less likely to be injured. Students of all races and income groups protested together. And together, they got politicians to sit up and listen – something voters, reporters and even the public protector, so far, have struggled to do. Blade Nzimande may have joked about “Students Must Fall”, but I am fairly sure he went home a very anxious man. These students, whatever you think about them, showed us what unity can do.

A student told me on Friday: “The elders are no longer our liberators. The youth beat apartheid, and we are ready for this government.” Buckle up. We’re in for a heck of a ride. DM