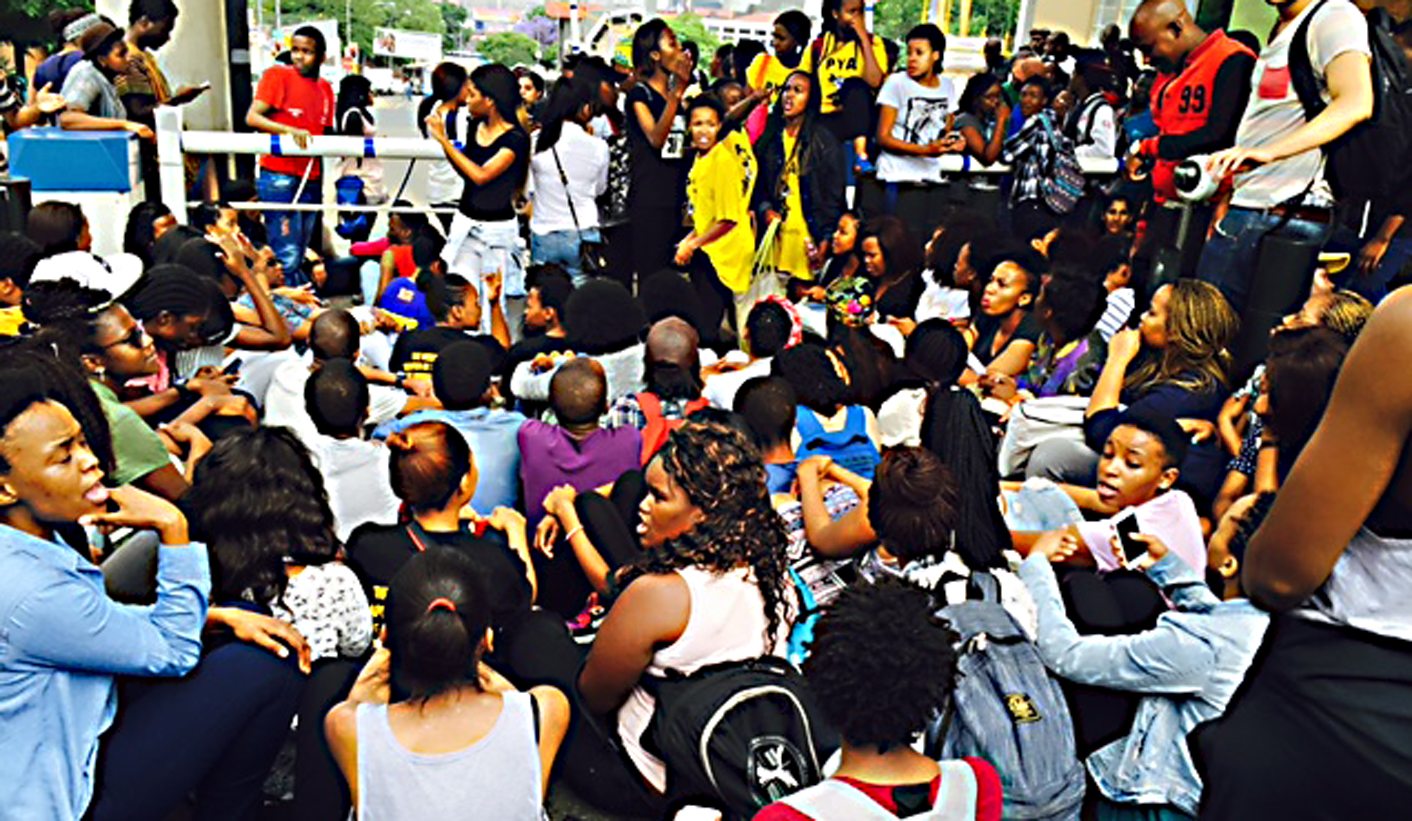 The WitsFeesMustFall protest is brave and necessary. Students are putting their bodies and education on the line to protest first about the fee increase for next year – which puts the upfront registration payment at nearly R10,000 – but also against the financial exclusion of black students from the university in general. To put it another way – these students are protesting the institutional violence inflicted by the University of the Witwatersrand (Wits). This violence destroys lives in a more systematic, brutal way than physical violence. It excludes the majority of the population from tertiary education programmes that we are told make one ‘successful’ or ‘marketable’ or ‘employable’. The thousands of protesters are students who have studied, who want to write exams, and want to finish their degrees, who want to graduate. But, in risking all of this to protest, we are deemed violent, ‘uncivilised’ and ‘barbaric’.

The financial exclusion is drastic. Those who manage to enter the institution are also subjected to constant threats of financial exclusion: Wits administration is never as efficient as when it is de-activating student cards. If fees are unpaid, student cards are de-activated and people can no longer access the campus, the library or the online networks. Also, marks are withheld for unpaid fees. The same system which excludes poor students also outsources workers, so that the cleaning, maintenance, and garden staff who work on the university campus earn an undignified, poverty wage. The shutdown of Wits over the four days is also about this violence.

We are protesting against this fee increase, but also against the structural, everyday violence against black bodies on campus. Workers have supported students in this protest, under threat of unpaid days and being fired. Some workers were instructed not to come to work on Friday – meaning an automatic unpaid day. As Wits Worker’s Solidarity, supporting workers on campus, this year we have been trying to get the university to take seriously the violence of outsourcing, and the conditions of workers on campus. In one case, MJL electrical workers were not paid in the beginning of the year, and then, when the company liquidated, were left unemployed, and without Unemployment Insurance Fund payments or benefits. Beyond promises to ask the companies who took over MJL’s contracts to employ the 22 workers, management did not take responsibility for the people working on their campus, people who actually ensure that the campus functions.

This skewed view of violence isn’t limited to the difference between physical and non-physical violence.

During the protest I was consistently dealing with messages from white friends, colleagues, and people I hardly know, asking me to explain/account for/denounce incidences of “violence”. These instances of violence had been documented on social media, and were fuelling a “vandalising, violent, barbaric, students” narrative.

As a participant in the protest, but also as one of the few white protesters, one of the protesters who can afford the fees, I was being asked to account for the actions and intentions of every person in the protest. And it was implied that the entire protest would be invalidated if there was an incidence of violence.

I became more frustrated and desperate: one person who had – according to him – been ‘mobbed’ after he tried to break the barricade (the barricade not allowing cars to leave), and, when he met with resistance, threw traffic cones at the protesters, wrote an article. This article framed the protest as violent and – more problematically – the student claimed to support the protest, but not to support how it was being done.

This, again, pushes the protesters into a narrative of being violent, irrational, stupid, uninformed, and politically unaware. This student who decided to break the barricade affords himself the right to judge the protest as “good but misguided” and himself the right to ‘forgive’ (isn’t that a word we are painfully familiar with in South Africa as a way to paper over institutional violence) the violence and STILL ‘support’ the protest. There are three things I want to say to this:

First, if a student supports the protest, that student will not think that it does not apply to them. They will not think that their temporary inconvenience trumps the efforts of thousands of student to make their political statement of shutting down the university. If a student supports the protest, they could join, or wait until the shutdown allowed them to get out, or anything except trying to ignore or violently disrupt the protest.

Secondly, again, the discourse around violence in South Africa is anti-poor and anti-black. Because that one incidence of violence gets reported. However what I saw was so many incidences of violence directed at protesters, and other protesters intervening to make sure that comrades who were angered and hurt by the violence did not respond in kind. This also saw protesters picking up litter at the end of the protest, to make sure the university wasn’t left in a mess.

Thirdly, I reject the idea that non-violent protest needs to be held up as an impossible spotless ideal of how things should be argued in South Africa. When there has been no space, no response, no listening – the protest grows into a space where it will get a response. South Africa has a history of this: a move from peaceful to violent protest, and a history (the Truth and Reconciliation Commission, and the transition) in which a specific type of non-violence was presented as the way to healing, and to a solution.

I do not want people to be hurt, or killed. But I want a definition of ‘non-violence’ to include the non-physical – or physical types of violence that are erased – violence that perpetuates the status quo in our country.

I am in no position to ‘condone’ or ‘validate’ anything. I can support. I can support as someone who is part of the structural violence, and so, in saying I support violent protest if it comes to that, I support violence also if it is directed at me. As students are putting their bodies on the line, my body, as part of the structural violence, must be on the line as well.

Lastly, when we are presented with only a specific idea of what comprises ‘non-violence’ as a solution, we are partaking in a dangerous discourse. Activist Natasha Vally reminded me of the importance of holding two things close together: we must not smash hope. We have to be able to imagine a better way, life, world. At the same time, we cannot get stuck in a discourse that only allows protest when the protesters can present a ‘concrete solutions’. This places the burden of fixing the intricacies of oppression on the oppressed – and the burden is to fix problems that are so deep that they will take a paradigm shift to fix. There has to be a space for people who are experiencing the broken system to say that the system is broken. And when they say that, and it is dismissed, they will say it in many different ways until it is heard. DM

Sarah Godsell is a poet and an activist. She has grown up in Johannesburg, and has a deep love for this city, with all it contains and all it makes visible.  She recently completed her PhD in History at the University of the Witwatersrand.