Analysis: Is Nkosazana Dlamini-Zuma the woman for the job of president? 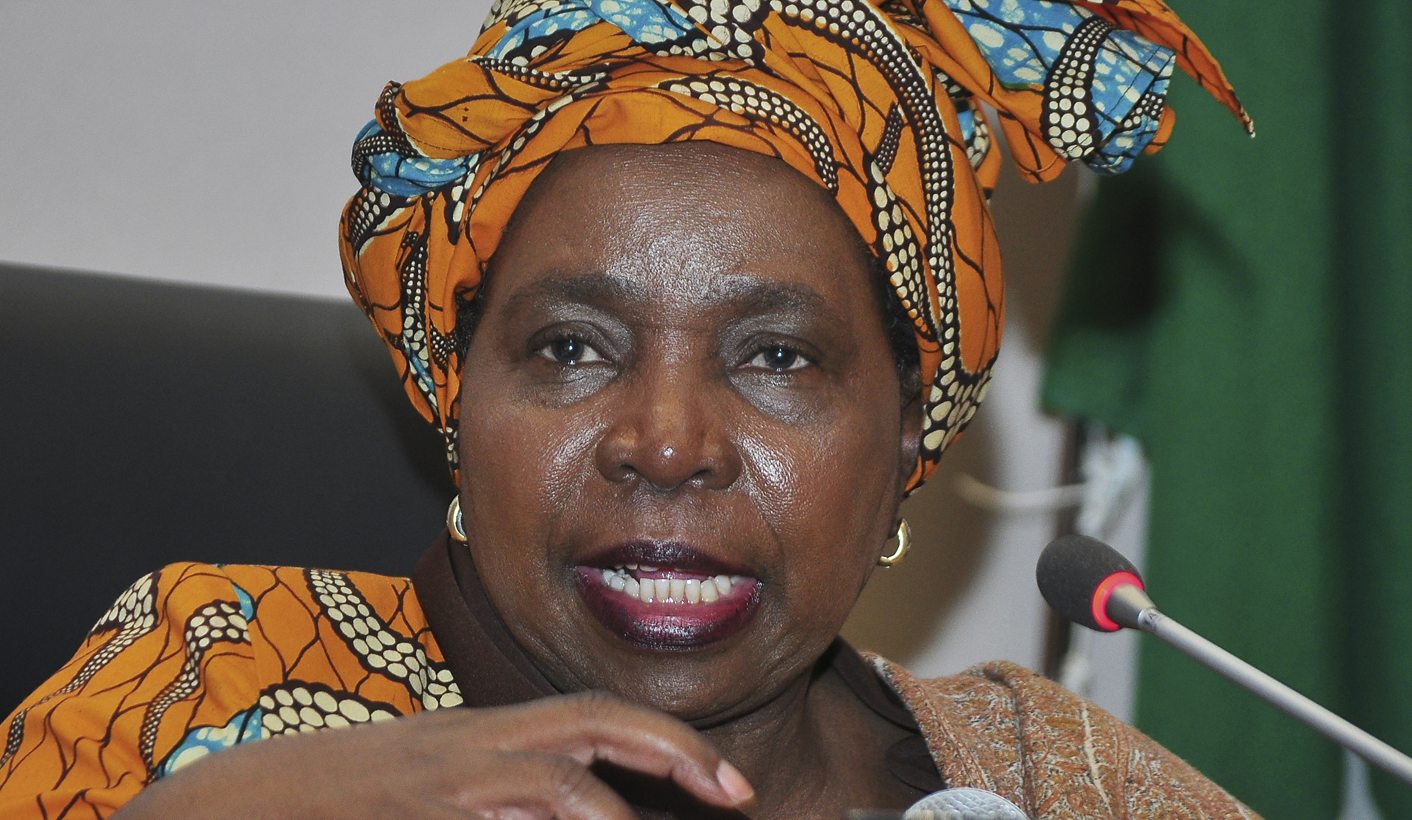 Nkosazana Dlamini-Zuma may well be South Africa’s next president. As the succession battle heats up, it has become the norm for analysts to describe Dlamini-Zuma’s time in the South African government in glowing terms, without giving much detail as to why her work there should be held in high esteem. REBECCA DAVIS takes a look.

Former Financial Mail editor Barney Mthombothi wrote in the Sunday Times last weekend: “Somebody seems to have convinced [Nkosazana Dlamini-Zuma] that she’s presidential material. She will be awful. She’s bland, colourless and incoherent. She has nothing to commend her to the job except that she’s paid her dues to the party.”

Mthombothi proceeds to describe her time at the African Union (AU) as unexceptional, and suggests she may have played a “major role” in ensuring the safe passage of Sudanese President Omar al-Bashir from South Africa.

“It should also be remembered that Dlamini-Zuma planted possibly the first seeds of corruption by the new government,” Mthombothi writes. “Compared to Nkandla, the Sarafina musical was small beer, but it’s a torrent that started what ultimately led to a flood. And like her ex-husband on Nkandla, she was pretty blasé and unrepentant about it.”

Mthombothi’s sentiments on Nkosazana Dlamini-Zuma are a notable exception to the current norm. The narrative now seems to be that Dlamini-Zuma’s past political record, and particularly her performance while in government, was “impeccable” – to quote a report in the same edition of the Sunday Times.

But looking back at Dlamini-Zuma’s record in government, does the idea that she produced sterling work actually hold up?

One thing that cannot be disputed is that Dlamini-Zuma is an extremely experienced politician. She has served under every African National Congress (ANC) president: health minister under Nelson Mandela between 1994 and 1999; foreign affairs minister under Thabo Mbeki and Kgalema Motlanthe between 1999 and 2009; and home affairs minister under Jacob Zuma, from 2009 until her resignation in October 2012. (She left the government to take over the leading position at the African Union)

Let’s start with her role as health minister in the first democratic government. Dlamini-Zuma, a qualified medical doctor, was faced with a massive and unenviable challenge in formulating health systems for nine new provincial structures.

“It is perhaps understandable, then, that in the first few years of the new government the health minister neglected to consult with civil society,” academic Nicoli Nattrass writes in Mortal Combat: AIDS Denialism and the Struggle for Antiretrovirals in South Africa (2007). “However, the cost of this was poor policy decision making and exposure to angry protests from civil society, as she discovered during the Sarafina II scandal of 1996.”

The Sarafina II scandal saw European Union funding to the tune of R14,27-million channelled to playwright Mbongeni Ngema after he won a contract to write a play about Aids. As a result of concern from opposition parties over the amount being spent on a single play, the matter was referred to the public protector for investigation. The public protector’s report found that the expenditure was unauthorised, the initiative mismanaged and that both Dlamini-Zuma and her department’s director-general, Olive Shisana, had misled Parliament and the media.

As major a scandal as this was in its time, it was overshadowed the following year by the Virodene scandal – in which Dlamini-Zuma played a pivotal role.

When two scientists approached the health minister in 1997 and informed her that they were conducting an unofficial trial on Aids patients using an antifreeze solution they called Virodene, Dlamini-Zuma was sufficiently impressed to invite them to present their findings to Cabinet. This was a blatant breach of the protocol which says medicines have to go through the processes of the Medical Research Council (MRC), on which Dlamini-Zuma had previously worked.

The MRC subsequently identified a range of problems with the Virodene trial and ordered it to cease. Dlamini-Zuma’s response was to initiate a ‘review team’ to evaluate the MRC, which recommended that the MRC itself should cease to exist.

In the absence of permission from the MRC, however, Virodene had to be tested outside the country, with financial help from the ANC. “No evidence of its effectiveness has ever been published,” writes Nattrass.

In 1998 Dlamini-Zuma was also responsible for suspending pilot projects testing the use of antiretrovirals to prevent mother-to-child-transmission, claiming that they were “unaffordable”. Eastern Cape doctor (and Pan Africanist Congress health secretary) Costa Gazi was subsequently fined for slander after suggesting that Dlamini-Zuma be tried for manslaughter for not supporting the provision of the drugs to HIV-positive mothers.

“[Dlamini-Zuma] came in with very good intent,” Section27’s Mark Heywood told Daily Maverick on Tuesday. “The area where she struck her greatest success was in the anti-smoking regulations she introduced.” (Dlamini-Zuma introduced new laws to crack down on smoking in public.) Heywood added that she put in place some important legislative reform, but didn’t always see the policies through.

Summing up her performance, Heywood said: “I would give her a 4/10, to be honest. But she was in a difficult period. Being the first health minister was never going to be easy.”

What about Dlamini-Zuma’s stint as foreign affairs minister, a position she held for a decade?

Supporters point to the role Dlamini-Zuma played in helping broker peace deals in Burundi and the Democratic Republic of the Congo. But there are other less positive aspects of her tenure.

Earlier this year, Dlamini-Zuma was implicated in the payment of $10-million to the infamous 2010 Fifa World Cup Diaspora Legacy Programme. A December 2007 letter sent by Danny Jordaan to Fifa states that Jordaan “had a discussion with the minister of foreign affairs, Dr Nkosazana Dlamini-Zuma”, who said the funds should be paid over.

But perhaps more damning is the notion that Dlamini-Zuma’s time as foreign minister took a strategic form that is hard to discern at all.

“The conventional wisdom is that it’s one of those areas where you have to think long term,” University of Cape Town politics professor Anthony Butler told the Daily Maverick.

“Under [Jacob] Zuma, you had a clear change of direction. You can disagree with it, but you can see what it is: developing strategic south-south partnerships and so on. It wasn’t clear what Dlamini-Zuma’s strategy was, other than following Mbeki’s [African Renaissance] project.”

There is a fair amount of evidence to suggest, however, that Dlamini-Zuma profited from incremental work which started long before she took office – and that she benefited from extremely dedicated and talented department director-generals whose time at Home Affairs began years before hers. In particular, Mavuso Msimang should be credited with much of the clean-up. As early as 2007, two years before Dlamini-Zuma became minister, Msimang was being hailed as “Home Affairs’ turnaround man”.

Said Butler: “There have been studies on the Home Affairs turnaround. They showed these painstaking reforms introduced with huge teams of consultants. But after a year of Dlamini-Zuma in the job, people started claiming she’d fixed it.”

Considered from these angles, Dlamini-Zuma’s work in government begins to look substantially less rosy than the way it is currently being painted. In this respect, she has certainly benefited from being out of government politics for the past three years, in a country with a short collective memory. Now, Dlamini-Zuma is able to return from the AU as a venerated elder stateswoman.

“The AU role has taken her out of local politics, to come back with acquired seniority,” said Butler: a kind of seniority and mystique she might have struggled to attain if she had carried on in ministerial roles. “The one thing that can give her that seniority is pan-Africanism.”

Many of us would be thrilled if South Africa were to be led by its first female president. But does Nkosazana Dlamini-Zuma’s political history suggest she is the right woman for that job? DM