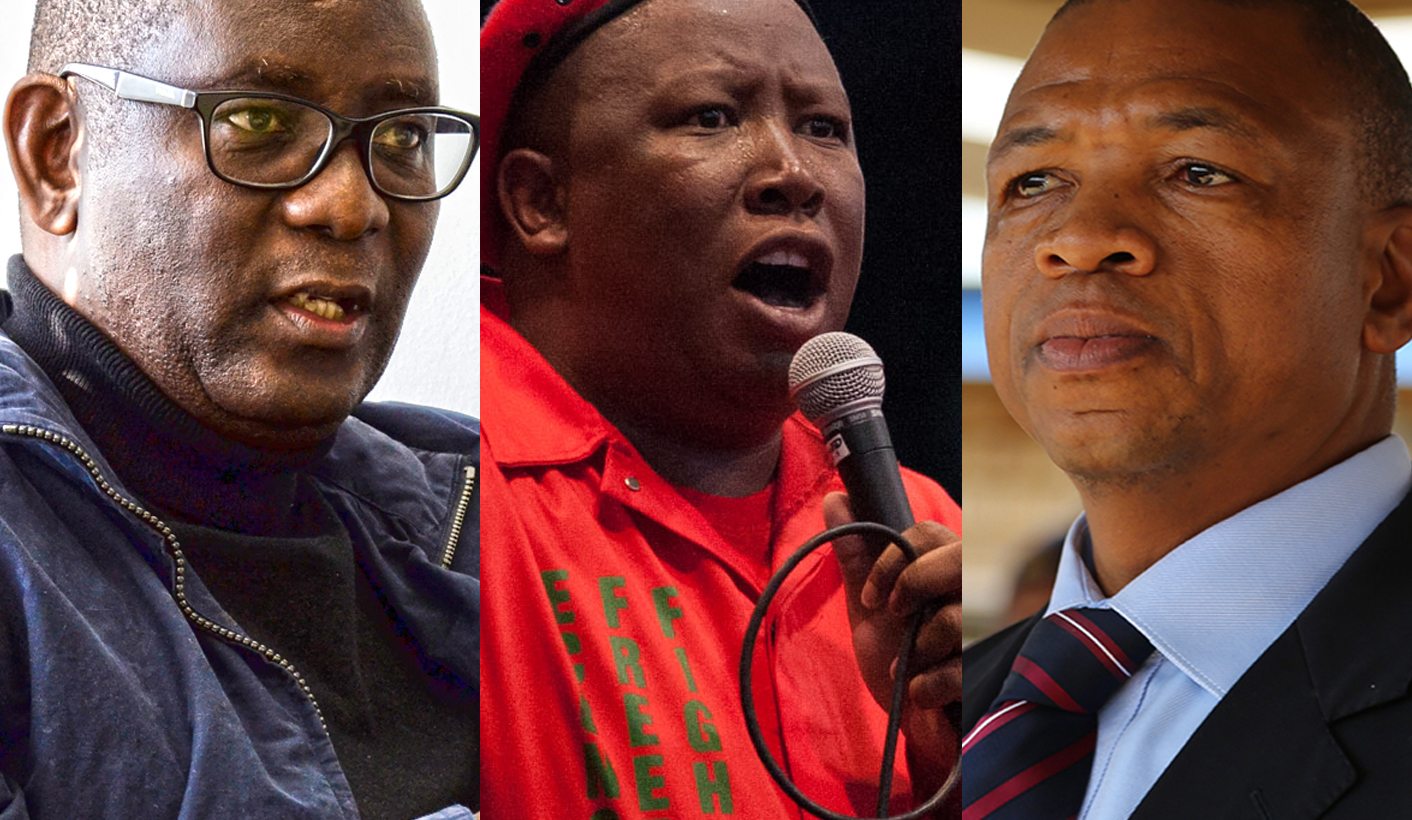 In March, State Security Minister David Mahlobo announced that his department was investigating a group of prominent South Africans named in a bizarre blog as agents on the US Central Intelligence Agency. We never quite heard back from him whether Thuli Madonsela, Julius Malema, Lindiwe Mazibuko and Joseph Mathunjwa were guilty of espionage. Now there’s a new conspiracy theory afloat – that Malema and Unite Against Corruption convenor Zwelinzima Vavi want to overthrow the government. This time the allegation is courtesy of North West Premier Supra Mahumapelo. With the ANC’s national general council this weekend, this is a conveniently timed allegation. By RANJENI MUNUSAMY.

Apparently Supra Mahumapelo does not like conspiracy theories. On Monday night he urged people to refrain from spreading conspiracy theories about the dramatic killing of businessman Wandile Bozwana in Pretoria on Friday. Bozwana died after the car he was travelling in was peppered with bullets in a dramatic daylight shooting.

Mahumapelo’s office said they had noted reports linking the shooting to a court case involving Bozwana’s company and the North West government, News24 reported. “Some individuals within the political space continue to make unfortunate insinuations that seek to fan public emotions on the matter. Premier Supra Mahumapelo has appealed to the public to fully cooperate with law enforcement agencies in order to ensure the speedy arrest of the perpetrators of this cruel shooting,” his spokesperson Brian Setswambung said.

He said Mahumapelo called on those with information to approach the law enforcement agencies rather than to raise suspicions in the public space.

It is rather ironic then that just the day before, Mahumapelo was “raising suspicions in the public space” about Economic Freedom Fighters (EFF) leader Julius Malema and former Cosatu general secretary Zwelinzima Vavi. Speaking at a South African Communist Party event in Rustenburg, Mahumapelo said the two leaders were plotting to overthrow the government. This was seemingly based on what Vavi and Malema had said during the Unite Against Corruption march in Pretoria last week.

Since Vavi was expelled from Cosatu in March, there has been speculation about his political future considering his heavy criticism of the ANC. While Vavi has been forthright about his intentions to start a new trade union federation, he has not indicated where he is heading politically, nor come out in support of metalworkers’ union Numsa’s efforts to form a workers’ party. Following the distribution of a rogue “intelligence report” two years ago claiming Vavi was planning to join the EFF, the suspicion has lingered amongst his enemies in Cosatu and the ANC.

There was no evidence of this or any form of co-operation between Vavi and the EFF. That is until Unite Against Corruption put Vavi and Malema on the same stage. Although the Pretoria march was addressed by several people, politically it is these two who stand out. They are also the two people who can wreak the most damage on the ANC and who were the most scathing in their attacks on President Jacob Zuma and his government.

It has been difficult for the ANC to respond to the Unite Against Corruption campaign as they need to be seen to supporting an initiative to combat corruption while sidestepping condemnation aimed at government. Minister in the Presidency Jeff Radebe and ANC spokesperson Zizi Kodwa attended the march but have not responded to the stinging remarks by Malema and Vavi.

So Mahumapelo has stepped up. The North West premier is one of the leaders of a lobby group, dubbed the “premier league”, which has been pulling strings in ANC structures and seeking to influence the outcome of leadership elections. The group, led by Mahumapelo and his counterparts in the Free State and Mpumalanga, rose to prominence by playing kingmakers at the recent ANC Women’s League and ANC Youth League conferences. Their ultimate goal is directing the outcome of the leadership elections at the ANC’s next national conference in 2017.

Concern has been rising about the influence of this lobby group, which has also gained the support of one of two factions in KwaZulu-Natal fighting for dominance. Talk in ANC circles is that the “premier league” will be put in its place at the party’s national general council (NGC) this weekend.

But popularity in the ANC is often determined by how people fight off enemies and potential threats. Malema and Vavi were themselves useful in the ANC for doing precisely that. Now that they are scathing critics of the ANC, someone has to step up to deal with them. The default attack strategy in the ANC is to conjure up a conspiracy theory against its critics and enemies.

This has been the case time and again, with conspiracy allegations against among others Public Protector Thuli Madonsela, former Democratic Alliance parliamentary leader Lindiwe Mazibuko, Numsa’s leaders, Vavi and Malema.

While these allegations always lack foundation and credibility, it came as a surprise earlier this year that State Security Minister David Mahlobo announced an investigation by his department into claims in an error-ridden blog that Madonsela, Malema, Mazibuko and Association of Mineworkers and Construction Union president Joseph Mathunjwa were CIA agents. Mahlobo has not reported back on the matter and for as long as they are not cleared, the claims against them can be used whenever convenient.

Mahumapelo’s claim that Vavi and Malema were plotting to overthrow the government will therefore earn him some traction countering the Unite Against Corruption campaign.

The premier league’s influence and power will be tested in a few days at the NGC. This will be shown by the amount of support they have on the conference floor but also the backing they have in the top leadership. Up to now, they appeared to have the support of Zuma and treasurer general Zweli Mkhize. It remains to be seen whether other factions have done sufficient lobbying to challenge the premier league.

While the premier league might be ruffling feathers by jumping ahead in the succession debate, there are also showing their usefulness. The ANC is always in need of henchmen and they do not always use facts or logic to inform their attacks. For as long as they are able to serve the master, they will remain safe politically. DM