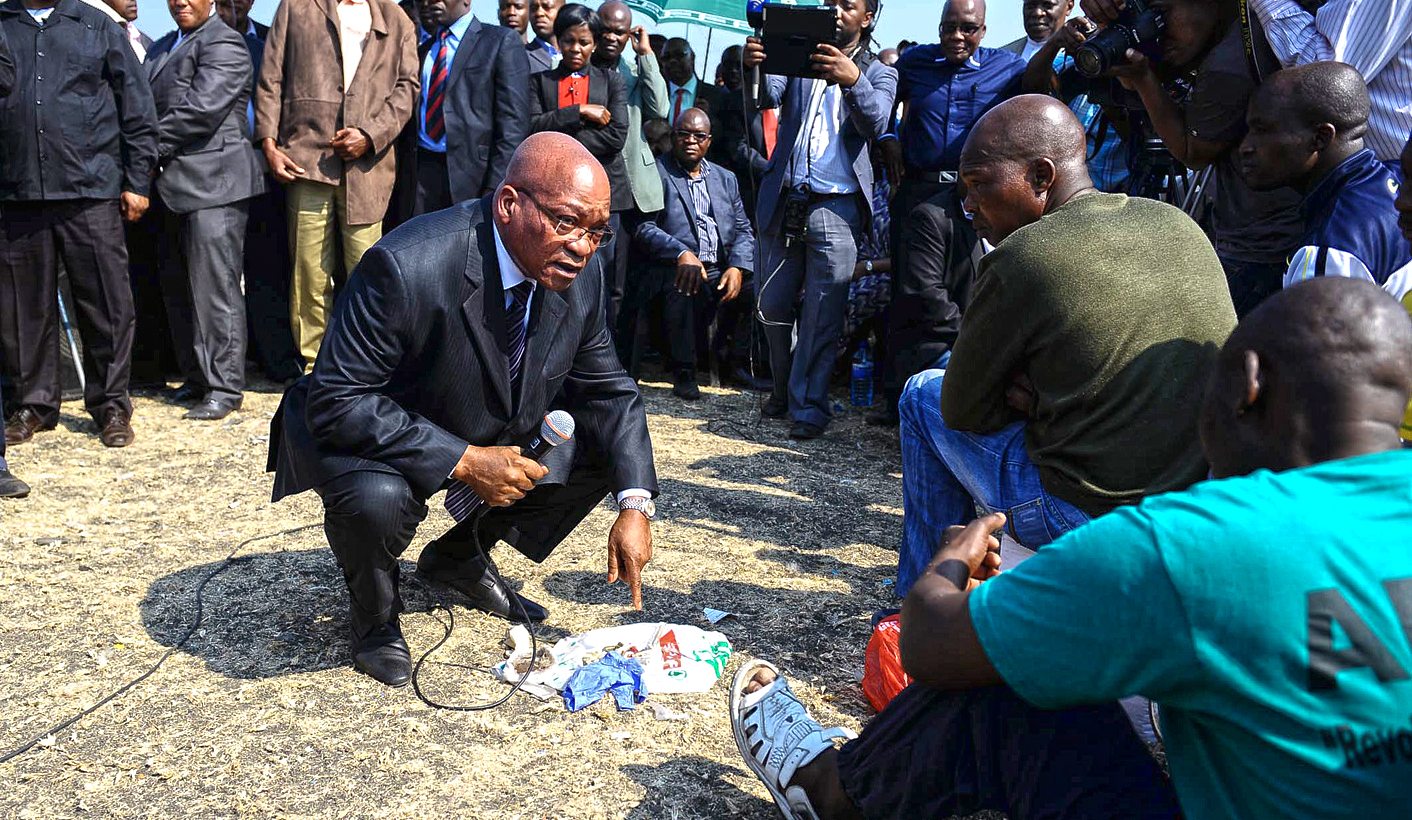 Compensation for the victims of Marikana won't bring back the dead. It won't put killers on trial. Still, it's something. On Tuesday, President Jacob Zuma announced plans to engage victims on out-of-court compensation. With justice continually delayed and denied, victims' lawyers are tentatively welcoming the announcement, but they will wait for a formal communication before responding. By GREG NICOLSON.

Déjà vu hit on Tuesday night. In June, President Jacob Zuma released the Marikana commission of inquiry report without notifying the families of the victims, who had sat through the inquiry for years and wanted time to prepare emotionally and legally. They heard the findings through the media. On Tuesday, the first official notice that the state is willing to negotiate compensation regarding the Marikana civil cases also came through the media. An official statement from Zuma came almost two hours later.

“All we hear is these press statements and it’s not helping our cause,” said Andires Nkome, legal representative for 275 mineworkers who have filed a civil case for compensation. He said it reflected the continued “contempt” shown towards his clients.

Zuma’s statement, however, could be a welcome development for the families of those killed in Marikana and the injured and arrested mineworkers. Both groups have filed civil compensation claims, but have always said that an out-of-court settlement would be preferable. It would avoid sitting in court for years and save the state in legal costs.

Zuma said he is still considering the the commission of inquiry’s recommendations and has “instituted steps” for Judge Cornelis Johannes Classen and two state advocates to investigate findings against Police Commissioner Riah Phiyega.

“Government wishes to move forward to address the consequences of the incidents at Marikana. These incidents include not only the deaths and injuries of striking miners, but the deaths of other miners, security officials and police officers. What happened at Marikana hurt the whole nation and the time has come for healing to begin,” said Zuma, who is in New York attending a meeting of the United Nations.

“With that in mind, government is exploring initiating an alternative dispute resolution process to expedite the processing of all claims arising from the tragic incidents of August 2012. A judge, assisted by experts, will be asked to lead this process in order to reinforce its independence,” he continued. “Government will engage with the legal representatives of claimants, and encourage them to use this process. To the extent that some do not lend their cooperation, or it is not possible to resolve claims through mediation, government will seek to do so through the court process. But it is hoped that the aim of achieving swift compensation for bona fide claims will be shared by all who genuinely seek to assist those who have suffered.”

The 275 injured and arrested mineworkers have lodged compensation claims for R3-million each. That includes R1.5-million in damages for assault and police brutality, R1-million for unlawful detention and arrest, and R500,000 for malicious prosecution.

On Tuesday, Nkome said he couldn’t comment until the presidency engages them formally. Then he will be able to speak to his clients and provide an update. He said they had always hoped that sense would prevail and they could talk with the state about a settlement.

In response to the civil claims from the Marikana injured and arrested and the families of the 34 mineworkers who were killed, the state had requested an extension to oppose them. While he has not commented on whether compensation would be provided, Police Minister Nkosinathi Nhleko’s line has been that the after effects of the tragedy should come to an end.

The Socio-Economic Rights Institute (SERI), Wits Law Clinic and the Legal Resources Centre lodged civil claims for compensation on behalf of 326 dependants of 36 mineworkers killed in the week of the Marikana massacre. They haven’t announced the amount of compensation they are seeking. When Daily Maverick spoke to SERI attorney Kathleen Hardy she said she had seen the media reports, but nothing official from the Presidency.

“We’ve just heard about this now with everybody else,” she said. Hardy said they were waiting for formal communication and the terms of the proposal, after which they could consult their clients and take instructions on how to proceed. “If this is in good faith, putting their hand out that this can be resolved as quickly as possible and the families can get compensation without a long, drawn-out process, then the families would welcome that,” she said. For now their position is the same as when Daily Maverick last spoke to SERI attorney Nomzamo Zondo, who said of the prospect of a settlement:“We don’t know, honestly. We’re optimistic.”

Zuma’s spokesperson Bongani Majola confirmed the reports minutes before the official statement was released. He said from New York that the process to investigate compensation will not only include the dependants of the 36 mineworkers killed and the 275 injured and arrested, but also the security guards, police and potentially even those killed in Marikana after 16 August, the day 34 mineworkers were killed.

If the compensation claims proceed through the court, the state faces an expensive and difficult case, with numerous claims of negligence already having come up in the Marikana commission. Considering the costs involved in taking the case to court and the low chances of winning, it makes sense for the state to settle. A prolonged, expensive case would likely further embarrass the state and particularly the South African Police Service and draw out the issue that has led to African National Congress leaders being called murderers in Parliament.

All of those affected by Marikana suffered financial setbacks. Compensation will not bring back the dead, but resolving the matter out of court could avoid years of further pain. It’s been over three years since the massacre and so far justice has been delayed and denied. DM