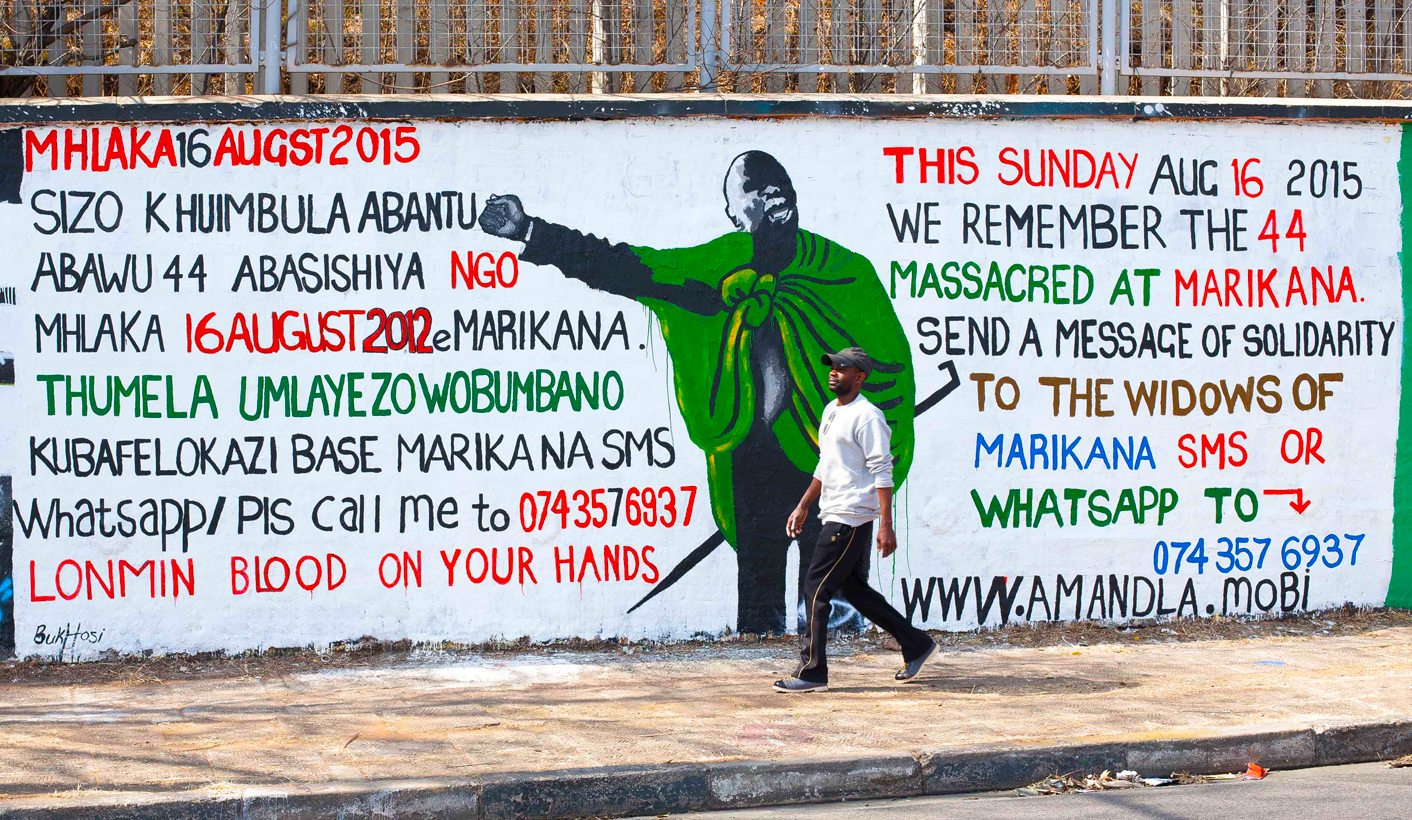 The Marikana massacre not only ripped away loved ones from their families. It also left relatives of the mineworkers impoverished. This week, court papers were filed on Minister of Police Nkosinathi Nhleko calling for financial compensation. With justice still elusive three years after the massacre, the families aren't confident, but their lawyers are. By GREG NICOLSON.

The particulars of the claim spell out what SAPS commanders should have done in Marikana. It then states:

“Instead, the commanders implemented the offensive, tactical phase of the operation: without sufficient rationale as to the manner and timing of the offensive, tactical phase of the operation; without proper information about the risks of the operation, the steps to be taken to mitigate those risks and the implications of this decision; without adequate consideration of the available intelligence; without an appropriate plan; without adequate briefing; with an inappropriate use of force; without maintaining command and control of the shooters; without maintaining communication with their officers; without ensuring the provision of medical attention to the injured strikers, alternatively preventing such attention from being given to the strikers; and without effectively and timeously using non-lethal force.”

It’s a mouthful that means the SAPS screwed up in Marikana. It means they will likely be liable to pay the families of the victims. And, worst of all for the cops, the claims don’t seem hard to prove.

Lawyers for the dependants of 37 mineworkers killed in Marikana are confident they have a strong case against the police in their civil claim for compensation. Since the massacre, relatives of the killed mineworkers have struggled financially, with many taking up the jobs of the dead to provide for their families. The compensation case is another avenue for justice, after the commission failed to make conclusive recommendations and findings. But it could also see the relatives’ pain extended from the commission to the courts.

“The conduct of the commanders was contrary to the law, policies, standing orders and orders governing the second incident [16 August]. The conduct of the commanders was wrongful and negligent. Were it not for the commanders’ wrongful and negligent conduct, the second incident would not have occurred and the deceased would not have been killed,” states the court papers served on Nhleko from the Socio-Economic Rights Institute (SERI), Legal Resources Centre and Wits Law Clinic.

The claims state that the 326 dependants linked to 37 of the deceased suffered a loss of financial support, medical expenses, emotional shock and trauma, and love and care. “The defendant is liable to the dependants for their damages at common law duly developed in accordance with s 39(2) of the Constitution. The defendant has not paid the dependants anything towards their damages.”

Lawyers for the families are reluctant to state how much compensation they want as there are differing claims according to the circumstances of the dependants. “There’s always the possibility of settling,” said SERI’s Nomzamo Zondo on Thursday, though avoiding a drawn-out court battle would depend on the state’s willingness and offer.

The police have admitted to killing the mineworkers and Zondo said the onus is on them to prove the killings were justified. The families also claim the police acted negligently and the Marikana Commission heard many points that could prove their case. They also want a formal apology from the police minister.

“This civil suit should be unnecessary. The Marikana Commission of Inquiry spent more than two years establishing what was already clear in video and media footage: the SAPS are responsible for causing these deaths. We hope that the minister will see the need for urgent compensation for the killing of these men,” said Kathleen Hardy, SERI’s attorney for the families.

Before he had received the papers, Nhleko said on Wednesday, “We need further engagements to bring about closure to the hurt, humiliation and sorrow of our people over this matter. We have certainly learnt many lessons out of this tragedy. We welcome the areas that have been flagged by the commission which are issues of institutional reform and transformation.” While not commenting specifically on the compensation claims, a statement said Nhleko would support a process where state departments and stakeholders “were to work together to make good on any decision by the courts”.

Speaking through an interpreter in SERI’s offices on Thursday, Vuyisane Mati, whose father Thembelakhe Mati died in Marikana, said he’s not happy to have to pursue civil claims but the families have received little financial help since the massacre. After two years of the Marikana Commission, the inquiry’s key recommendation was that the killings should be further investigated and the families feeling like they will never receive justice. Those who spoke on Thursday were pessimistic after their three-year ordeal but said they believe in their legal team.

During the commission the families of the killed mineworkers survived on donations from SERI, the Association of Mineworkers and Construction Union (AMCU) and the National Union of Metalworkers SA and since its completion last year many have taken the jobs of their dead relatives. Family members spoke emotionally about struggling to provide for their children and their internal battles working for Lonmin while their relatives died protesting for a monthly wage of R12,500 from the company. Betty Gadlela, the widow of Stelega Gadlela, said the families had written to the commission, presidency and Lonmin asking for a salary but it wasn’t until AMCU President Joseph Mathunjwa’s intervention that the platinum company offered the relatives jobs, which they accepted only to provide for their families.

Speaking in Parliament on Thursday, Economic Freedom Fighters (EFF) leader Julius Malema warned against pinning all the blame on Police Commissioner Riah Phiyega. The commission recommended an inquiry question her fitness to hold office. “Bureaucrat and ground forces of this murderous regime must not be the only ones that take full blame on Marikana. There must not be another Eugene de Kock, who gets sacrificed for all the political sins of the apartheid regime and political principals are celebrated as peace makers,” said Malema, blaming Deputy President Cyril Ramaphosa who was a non-executive director at Lonmin. “It was a premeditated mass murder or workers.”

Adding its voice to the discussion this week, Amnesty International has called for the police officers implicated in the massacre to be suspended immediately. That includes Phiyega.

Marking the third year since 16 August 2012, a commemoration will be held in Marikana on Sunday. The families of the mineworkers will not attend Lonmin’s event on Friday, some relatives said on Thursday, as they believe it’s aiming to undermine Sunday’s event. Across the country and even across the world events marking three years since the massacre are also being held this week. DM

Photo: A mural painted on the Johannesburg intersection of Empire Road and Jan Smuts Avenue calls for support for the killed Marikana mineworkers’ widows. (Greg Nicolson)