The Contender: Dlamini-Zuma walks the talk for SA’s big prize 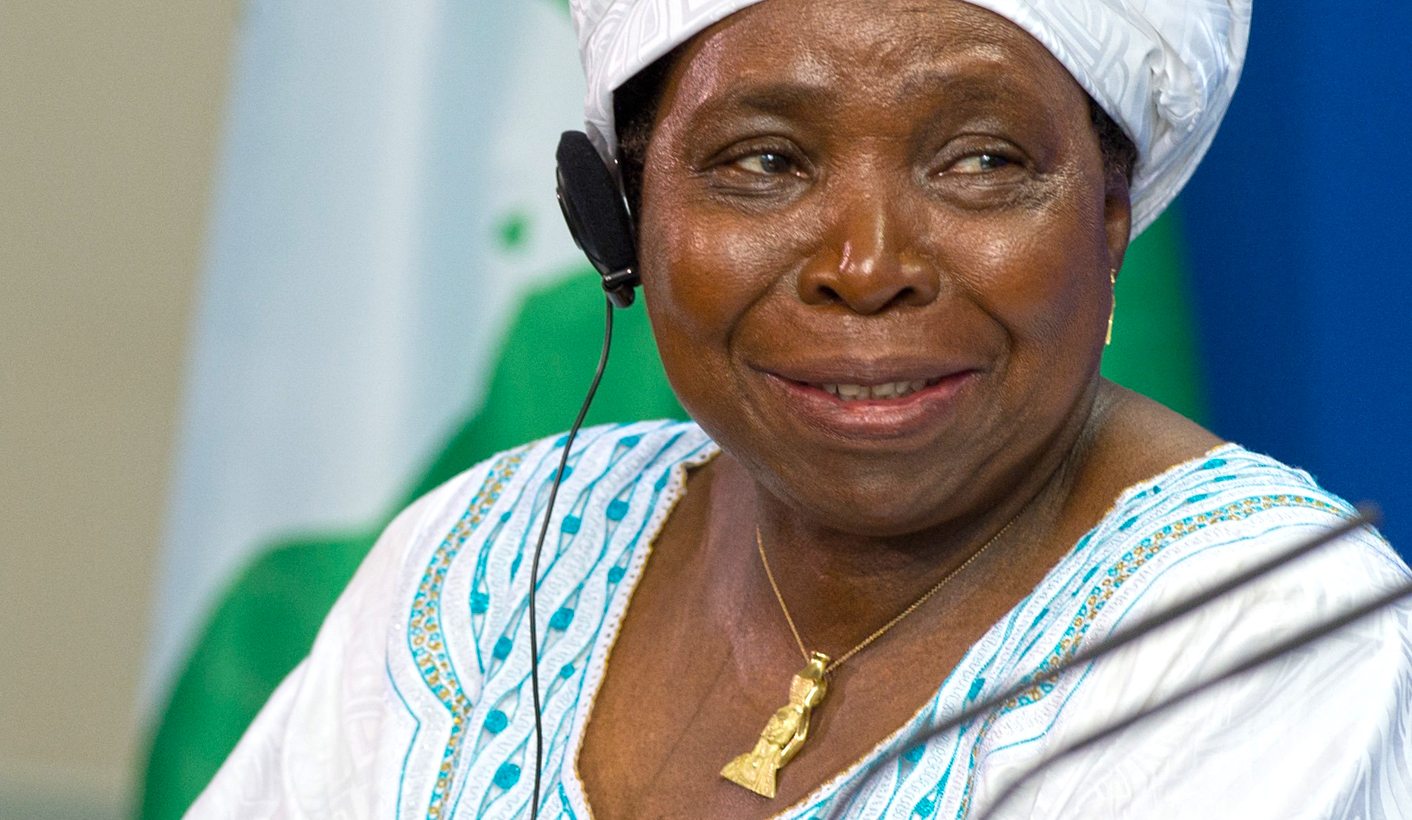 We probably will never know for sure until she signs a form accepting nomination as a candidate for African National Congress president but Nkosazana Dlamini-Zuma definitely has her game face on. Over the past few weeks, she has had high visibility in South Africa and her statements indicate she is ready to take on any position. Receiving an award on Wednesday night for being a prominent thinker and 'change agent' in society, Dlamini-Zuma made some bold statements about her visions for dealing with societal challenges. And women empowerment looks likely to be the centrepiece of her campaign. By RANJENI MUNUSAMY.

African Union (AU) Commission chairperson Nkosazana Dlamini-Zuma received the Gülen Peace Award from the Turquoise Harmony Institute at its annual Peace and Dialogue Awards ceremony on Wednesday night. It was expected that she would receive high praise as she joins a gallery of notables who previously received the awards, including Archbishop Emeritus Desmond Tutu, Graça Machel and Ahmed Kathrada. Dlamini-Zuma was not the only recipient of an award on the night but she was certainly the star attraction, particularly in the context of speculation that she might be reaching for the brass ring – the number one position in South African politics.

Of course there was no reference to the African National Congress (ANC) succession battle at the awards function – unlike in Parliament the same day where Deputy President Cyril Ramaphosa was being teased that he didn’t stand a chance of becoming president because he was up against the ‘Premier League’, a powerful lobby in the ANC.

Dlamini-Zuma, whose permanent station at the AU Commission in Addis Ababa has kept her out of domestic brawls, has been a lot more visible in South Africa recently. Her recent statements in Durban that she would not refuse any deployment by the ANC and that “having ambitions and big ambitions is a good thing” have certainly set tongues wagging that she was up for the challenge to be South Africa’s first woman president.

While she might be playing by the book and just going about her work, she does seem to be drawing fans and supporters. The ANC Women’s League has not named Dlamini-Zuma as its candidate but has declared that it will campaign for a woman president. The ‘Premier League’, led by the premiers of the Free State, North West and Mpumalanga, is also said to favour her over Ramaphosa.

The Turquoise Harmony Institute awards were in recognition of people working towards dialogue, peace and community service in various sectors. Although Dlamini-Zuma has not played any direct role in conflict resolution, her work at the AU Commission appears to have qualified her for the prestigious peace award named after the Turkish scholar Fethullah Gülen.

The introduction she received from Minister of Women in the Presidency Susan Shabangu was rather effusive, describing her as “one of the most important people in the world”. She spelt out some of Dlamini-Zuma’s successes in government, including taking on the tobacco giants to implement extensive anti-smoking laws in the country. Shabangu praised Dlamini-Zuma for “availing” herself to serve as the AU chairperson, which she said was a territory dominated by men. She said Dlamini-Zuma was a change agent working to ensure the organisation recognised gender and diversity.

“She has shaken the world,” Shabangu said.

Dlamini-Zuma made no comment about the gushing praise but said she was humbled “to be considered worthy to stand amongst the giants that are previous recipients of these awards”. Most of her address was focused on the need for dialogue as a means of conflict resolution on the continent.

“We must enhance our capacities to timely prevent, constructively manage and systematically transform conflicts to ensure peace and stability.” She said conflicts would always happen, even in families, but how these were managed was important.

Dlamini-Zuma said there was a perception that economic growth would reduce conflict and crime but these were more prevalent in countries where the gap between the rich and poor was greater. It was not necessarily poor countries that were plagued by conflict. Sometimes conflicts are fuelled by battles for control of natural and mineral resources, she said.

Dlamini-Zuma said it was important to invest in people, particularly the youth, to reduce the level of inequality in society. She said South Africa had a young population and while this was a big asset, it could be a source of conflict if not managed properly.

“Education, I think, is one of the quickest, biggest equalisers,” Dlamini-Zuma said. She said it was a way to raise people at the bottom of society quickly.

If Dlamini-Zuma’s campaign for leadership were run on a gender ticket, it wouldn’t just be politics. She is clearly passionate about women empowerment. She said in her speech that 75% of workers on farms in Africa were women. She said many women worked to support their families without land rights and access to the economy.

“If hard work paid, the women of the continent would be billionaires,” Dlamini-Zuma said.

She also encouraged healthy dialogue in society. “A nation not in conversation is not going to have development.” The struggle against Apartheid kept society engaged in dialogue. South Africa should not lose that, she said.

Dlamini-Zuma said she watched in wonder at how men negotiated power-sharing agreements in some countries. “It is all about who is going to take what … If women were at the table, they would probably remind these men about their responsibilities to their citizens. There is no mention of the people and what they get … Women would bring that to the table.”

(Ahem. Of course that was not a dig at the excellent mediation skills of one C Ramaphosa)

Dlamini-Zuma accepted her award on behalf of the AU but graciously dedicated it to the millions of people who “lost their lives fighting for a free Africa” and “who died in wars, past and present”. She also dedicated the award to Africa’s fallen peacekeepers, to the women of the continent who toil on the land and to children who live without parents who left to fight for liberation.

It is two years and three months before the ANC will elect its next president and a lot may change in that time. Any journalist who asks questions now about vying for the top is likely to be shot down.

But, you can always try to ask the question differently, which is what Daily Maverick did at the end of the awards function.

“Dr Zuma, you think awards and recognitions like this would inspire more women to stand in leadership positions on the continent?”

Those were the words of a seasoned politician who knows how to keep people guessing.

Of course he was trying to fob off the question with a joke. But the reality is that Ramaphosa is boxed in and cannot make any statements that might give an indication of what he intends to do as president. He is the chief defender of President Jacob Zuma and his administration. As ANC deputy president, he carries responsibility for the organisation’s problems and failures.

Dlamini-Zuma, on the other hand, is thousands of kilometres away and while she is a member of the ANC national executive committee, she does not carry as much of the burden.

If they had to go head-to-head, Ramaphosa will be the person carrying the failures of the current administration on his back, along with the Marikana baggage. Dlamini-Zuma will be carrying her numerous accolades and wealth of experience in government and the continental body.

For now, the smart money is on her. But December 2017 is too far away to place bets. There is no doubt, however, that the high-stakes game is already on. DM

Photo: Nkosazana Dlamini-Zuma, chairwoman of the African Union (AU), waits for questions from journalists, during a joint press conference with German chancellor Merkel (not pictured), at the chancellery in Berlin, Germany, 11 July 2013. EPA/SOEREN STACHE