NappiDaddi: Smart child-rearing for dads is heading this way 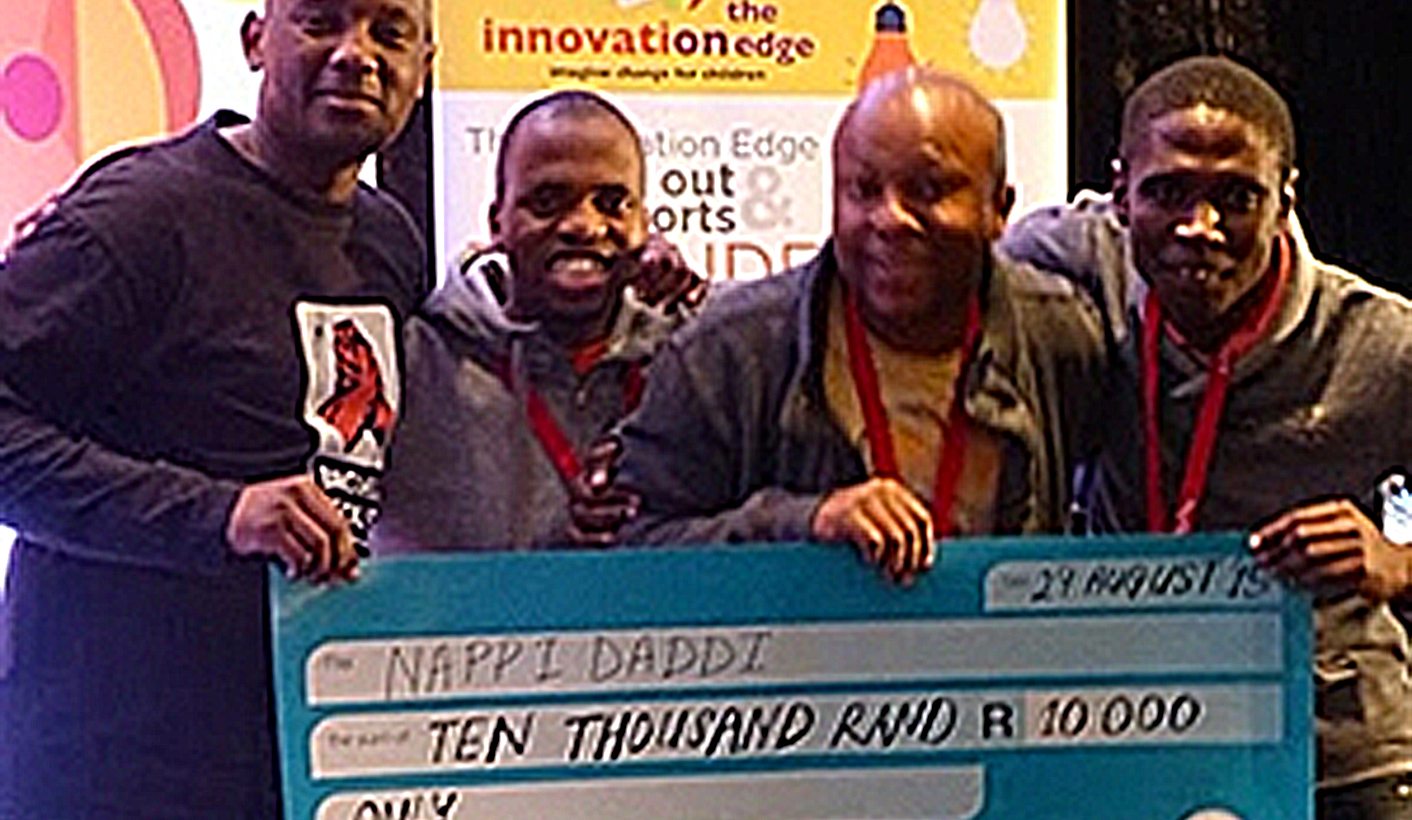 South Africa has one of the highest rates of absentee fathers in the world. But one group of local (present) fathers has designed an award-winning application that will incentivise dads in the rest of the country to be more involved in their children’s lives from early on, stimulating children’s emotional and intellectual development and providing support to both fathers and mothers along the way. By MARELISE VAN DER MERWE.

NappiDaddi, the mobile application (app) in question, walked away with the top innovation award and was designed under enormous pressure in a 24-hour period at the recent South African Innovation Summit 2015 hackathon for early childhood development (ECD). It was one of a number of innovative designs that aimed to tackle pervasive problems facing South Africa’s children.

Other winners included Music Garden, a mobile app designed to incorporate music into the development of young children, teaching them dance, sing, and learn words, letters and numbers; Project Enable, a concept which would allow ECD practitioners to adapt toys and games for use by children with various disabilities via an idea-sharing platform; and HearScreen, an already fully-functional mobile app that converts smartphones into hearing screening devices using off-the shelf headphones. HearScreen was developed by audiologist De Wet Swanepoel.

For the uninitiated, a hackathon – also known as a hack day, hackfest or codefest – is an event at which computer programmers and others involved in software development and hardware development, including graphic designers, interface designers and project managers, collaborate intensively on software projects. At this particular event, which was held on the last weekend in August and developed by the Silicon Cape Initiative for tech entrepreneurship and the Innovation Edge, participants were challenged with a number of questions, such as: How can we use technology to encourage fathers of young children to be more involved in their children’s early care and development? How do we use technology to stimulate problem solving or adaptation skills in parents? How can we use technology to promote reading and storytelling to young children? There were seven questions in all, but the NappiDaddi team focused on the first.

“All the team members are fathers,” team member Sello Lehong told Daily Maverick. “We were naturally drawn to the question as fathers, and as such, understanding of some of the challenges fathers face when raising their children.”

NappiDaddi gives fathers a platform on which to engage with each other and share ideas, information, frustrations and victories; even – according to team member Kanya Msila – “bragging rights”. It’s essentially a facilitated network targeted at millennials and Generation X, and includes an integrated gaming element as extra motivation, relying on the competitive instincts of participants to engage them further. Features include milestones (with achievement unlocking), challenges (with leaderboards – the ‘bragging rights’ mentioned earlier, which are vetted by mothers), an ‘adopt’ feature for immediate families and relatives, automatically generated programmes according to proximity to the child – which are shared with mothers – and a number of sharing and sharing/exchanging support features including peer-to-peer, group support and support from mothers.

Judging by the response received in the few days since winning the prize, says Lehong, there is a major need for more engagement with fathers, and since South Africa’s mobile penetration is so high, a mobile app is a useful tool. “From the feedback we have received thus far it seems as though there is a definite need for this sort of app, which was a bit of a surprise for us. Fathers are clueless out there and it seems this app might make a difference in fathers contributing positively towards their children’s upbringing,” he says. “The opportunity to build connected communities through technology is a definitely within our grasp. We are of the view that a powerful African concept such as Ubuntu can find resonance through technology.”

“NappiDaddi will encourage dads with various child care challenges,” Msila adds, explaining that the leaderboards, bragging rights and sharing and knowledge exchange were geared specifically towards encouraging friendly competition, which he believes will be very motivating.

“NappiDaddi eases the transitioning into parenthood through clear pattern recognition and rule-based guidance, as well as democratising the process of raising cognitively strong and healthy children through a facilitated network,” he explains.

The app’s design is not a minute too soon. South Africa is facing a crisis in terms of absent fathers. Just a third of our children live with both parents. Children from fatherless homes are more likely to face poverty, become involved in substance abuse, drop out of school, and suffer from health and emotional problems. Boys are more likely to become involved in crime, and girls are more likely to face teenage pregnancy. Female-headed households typically earn lower incomes. In a 2012 study by Linda Richter et al, entitled Fathers and other men in the lives of children and families, the authors point out that often circumstances exacerbate the problem: where employment and other conditions are favourable, they write, engagement by fathers tends to be higher. Where conditions are not favourable, the reverse is true.

“International research and some studies from South Africa indicate that children whose fathers are present achieve better at school, have higher self-esteem and are more secure in their relationships with partners of the opposite sex,” the authors write. “Women who are supported in stable bonds with men experience lower levels of family stress, are less likely to suffer mental health problems and derive greater satisfaction from their roles as mothers … Importantly, men not only contribute to women’s wellbeing and happiness, but in several studies men have also been found to buffer children against neglectful or harsh parenting by a distant, demoralised or overburdened mother.”

A 2013 study by Mazembo Mavungu Eddy, Hayley Thomson-de Boor, and Karabo Mphaka entitled So We Are the ATM Fathers notes that around half the country’s children live without daily contact with their fathers and that this presents serious social and developmental challenges. “Although a father’s physical presence alone is not necessarily a positive outcome in itself, widespread father absence has detrimental consequences for families and for society as a whole,” they write. “Responsible and engaged fathers, who do their share of parenting work, are beneficial to the development of children and to building families and societies that better reflect gender equity and protect child rights.” The abovementioned study differs from most other studies in that it actually gives voice to the absent fathers themselves, giving perspective to their feelings, viewpoints, and the reasons for their absences. The study found that in many cases, there was “acute awareness of the detrimental consequences of their absence, […] concern over their estrangement from their child/ren, as well as their readiness to participate in the restoration of broken ties and the prevention of the repetition of similar harmful parental behaviour by their children.”

A 2013 policy brief by the Human Sciences Research Council (HSRC) suggests that “fathers want to be active parents” and “have a strong sense of responsibility towards their children” but experience a number of barriers. The policy brief contradicts stereotypes that portray fathers as negligent, and typically choosing to be absent and uninvolved. Barriers, the authors found, were often financial, cultural or relational (for instance, a bad relationship with the child’s mother).

This suggests, then, that given the opening, some assistance, and a point of contact, there is in a number of cases the possibility that relationships can be repaired – that in the above sample group, at any rate, there is a fairly large portion of fathers who are willing to work at their relationships with their families. But of course, that is only the first step.

“Any programme seeking to address the widespread absence of fathers will have to tackle both the predominant restrictive notions of masculinity and fatherhood, and the current problematic dynamics that exist between men and women,” the study notes.

Certainly, it is far-fetched to imagine that a completely absent father will come home and reform after simply downloading an app. But it is also far-fetched to imagine that this is what the designers of the app are saying. It is rather, one imagines, that they would like to place a tool in the hands of fathers whose spirits are willing, but who feel they are lacking support or knowledge, and don’t know where to start. The HSRC policy brief, as a matter of fact, recommends that national legislation focus on defining fatherhood beyond simply providing for children, and drive the education of fathers in other areas such as physical and emotional support, much like the areas of education and engagement targeted by NappiDaddi. It also suggests driving interaction with, and support from, other members of the family – much like the peer and family support networks provided by the app. It’s not a solution, no, but as a support tool, there may be many a father who will find it useful.

Asked what motivated them to enter the competition, Lehong simply says: “The opportunity to use technology to alleviate some of the challenges within early childhood development.” There’s a sense that he and his team, as fathers, want to do what they can to help as many children as possible; and as their field is technology, they’re going to give that all they’ve got.

The team are going to spend their prize money on development, and aim to have a viable product within six months, Lehong says. The next phase is to test both market feedback and the most efficient way to make it available. Ultimately, they wish to rope in as partners ECD practitioners, healthcare professionals, social workers, other parenting groups, and key figures from the retail sector, such as baby-product retailers. Until then, it’s eyes on the future. DM