Health-e News: Stuck in a limbo, Free State’s community healthworkers struggle to get their jobs back 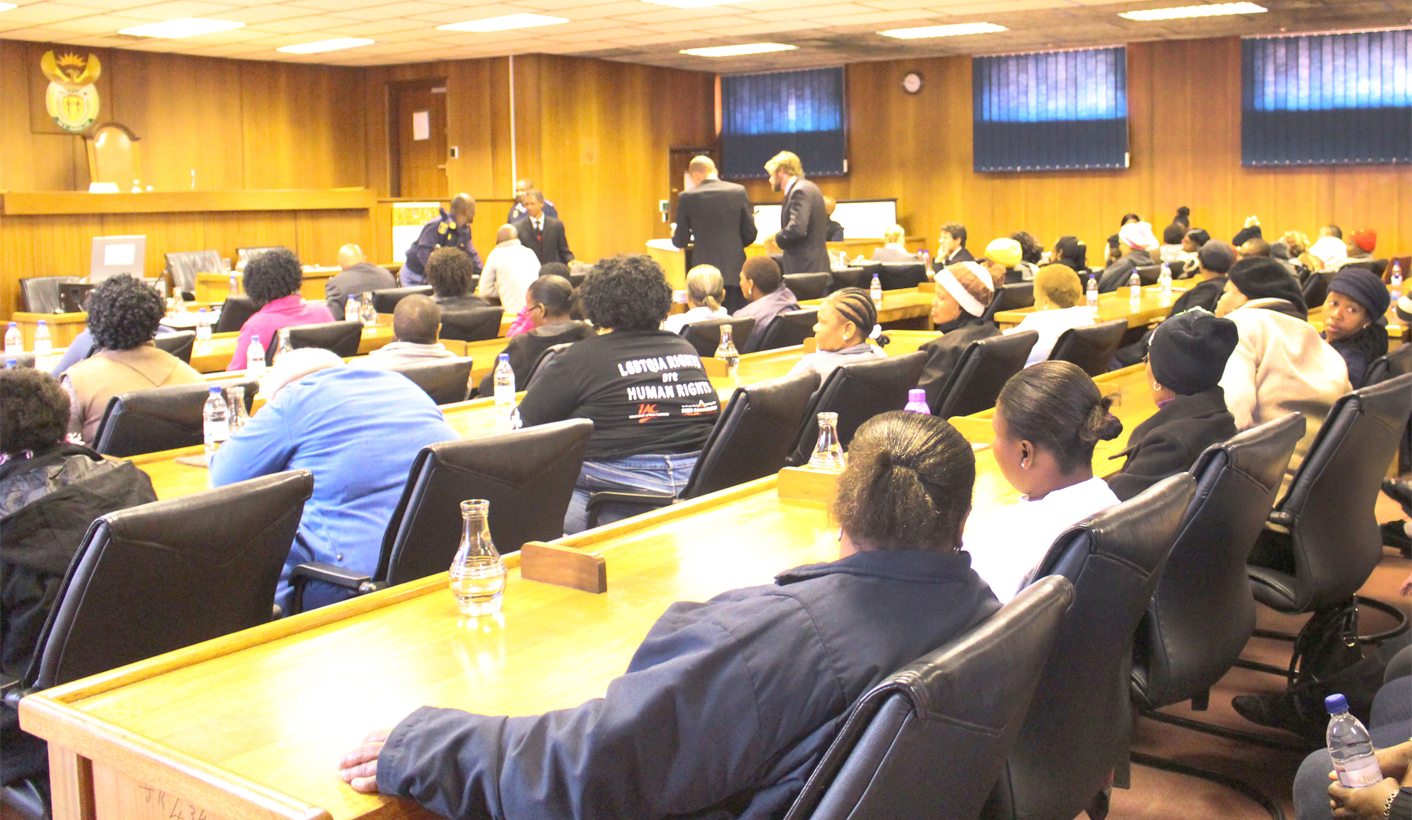 In April 2014, the Free State health department terminated the services of around 3,800 community healthworkers (CHW) – apparently for being too old and under-educated - despite many years’ service supplementing the province’s inadequate care for its sick. By Kerry Cullinan and Sibongile Nkosi for HEALTH E-NEWS.

After trying in vain to get a meeting with Health MEC Benny Malakoane to discuss the terminations, the CHW and Treatment Action Campaign (TAC) held a series of protests that culminated in the arrest of over 100 CHW at a vigil outside the provincial health department’s offices slightly over a year ago.

Later that week, 117 CHW were charged with the apartheid-era crime of participating in an illegal gathering. They have appeared in court five times since then, and last week their trial was postponed for the sixth time in Bloemfontein.

The Free State health department has since indicated that it will only employ CHW who have matric and who are under the age of 35 – effectively discarding the vast majority of those dismissed, who are generally middle-aged, under-educated and know no other work.

Initially, 117 CHW were charged with violating the Regulation of Gatherings Act, an apartheid era law that is currently facing a court challenge from the Social Justice Coalition for being unconstitutional.

SECTION27, which acted for the CHW, tried to get the charges set aside, arguing that although the Treatment Action Campaign (TAC), which organised the vigil, had not applied for permission, the vigil had not been declared illegal. But the magistrate refused to dismiss the charges.

However, 23 of those charged agreed to admit guilt. They no longer have to appear in court but will live the rest of their lives with criminal records. The former chairperson of TAC in Free State, Sello Mkhalipi, is believed to have persuaded them to accept the state’s offer to withdraw the charges against them if they accepted that the demonstration was “illegal”. Amid allegations of corruption, Mkalipi has broken with his former political home and set up a rival to TAC called the Positive Action Campaign.

But the remaining 94 will reappear in court on 28 September.

The dismissed CHW have been fighting for their survival since losing their R1,500 stipends last April – for many their only source of income.

Enoch Moware and Ouma Chabangu are two of those who have been charged. Both are now unemployed, but have had to find the means to travel 160km to Bloemfontein from Odendaalsrus for each of the five court appearance.

Chabangu takes care of her ill mother and when she attends court, she has to leave her with her children who don’t know how to take care of her properly. She is still owed three months’ pay. As she does not have a matric, she might never be employed as a CHW.

“It is hard as I still see some of the families I use to serve, but know that I cannot help them anymore,” said Chabangu.

Moware had to leave his wife and children last week. The trial lasted four days, which meant he could not do the odd jobs that put food on the table.

“The trial is causing a lot of strain as since we are unemployed and we have had to find other means to support our families,” said Moware, who has worked as a CHW for over six years.

Although he has a matric certificate, Moware has refused to seek reinstatement: “I refuse to take that contract, as there are my other colleagues, who have worked for 10 years serving communities and now will be laid down because of Grade 12 certificate,” he said. “What is a matric compared to the experience that we carry?”

Many of those dismissed started off as volunteers, motivated to alleviate suffering in their communities. Dimakatso Tsiane, 64, has been offering home-based care to people with cancer for the past 14 years.

“We started off as just a group of women who wanted to help people who were sick and didn’t receive social grants,” said Tsiane. “We helped take their children to school and we delivered food parcels to them. As a home-based caregiver, I would educate people about cancer, deliver medication… and bath those who were bedridden.

“I had a patient who would stand at the clinic gate every day and would only enter when he saw me. He wouldn’t allow the nurses to touch him if I wasn’t with him. Then we were told that we had to stop working. We were devastated for our patients. Now I survive on a pension,” said Tsiane.

But many of those dismissed are women in their forties – too old to meet the Free State’s age cut-off of 35 and far too young to get a pension.

Mantwa Medupe is a 43-year-old widow with seven children. She has worked for 13 years offering care to sick people: “Every day, I went into people’s homes, and bathed them and gave them their medication. I loved all my patients and I got along with most of them, although some were harder—some were even violent. The department terminated our contracts, and the patients have been suffering ever since.”

Matsediso Monaheng is the same age as Medupe and also has 13 years’ experience, although she was based at clinic and worked as an HIV counselor. She encouraged people to test for HIV, helped those who were HIV positive to accept their results and educated patients before they started antiretroviral treatment.

“I learned we’d been dismissed from people on the street,” said Monaheng. “Later, I checked my email and found out it was true. I’m a single mother and now we survive on a child support grant of R300.”

There is a wide range of research that credits HIV counselling as being key in getting people to accept ARV medicine and adhere to it, particularly in the early days of treatment when people feared that the medicine would poison them, as they had been led to believe by former President Thabo Mbeki.

Meanwhile, the home-based carers trudged from house to house, tracking down and alleviating the suffering of those with HIV who were succumbing to a range of sicknesses that their collapsing immune systems could not fight.

In any normal society, these community healthworkers would be considered to be saints. But in the Free State they are being discarded as if they are old and useless.

During the Mbeki era, these CHWs worked for a plethora of non-governmental organisations that had sprung up to do what should have been government’s work, had government accepted the existence of HIV and AIDS. When Jacob Zuma became president, AIDS denialism died and there was an agreement that government needed to assume control of fighting the HIV epidemic. A national plan was drawn up and many CHW wee incorporated into the provincial departments of health.

More recently, CHW have been written into the national plan to revitalise the health system from the bottom upwards in preparation for the National Health Insurance (NHI) scheme. According to this plan, community healthworkers will be given responsibility for visiting a certain number of households in their areas to find the sick, promote healthy living and  particularly to encourage pregnant women to go for regular check-ups and ensure that young kids were immunised.

This is already happening in NHI pilot districts countrywide, where CHWs have become key components of the ward-based outreach teams. KwaZulu-Natal is fairly advanced with integrating CHW into their revitalised primary healthcare plans and while it plans to only employ those with matric in future, it is not discarding the CHW it already has.

Are the Free State community healthworkers being punished for aligning themselves with the TAC?

The TAC has described the prosecution of the CHW as “political and malicious”. A petition calling for the charges against them to be dropped has been signed by over 1000 people, including Medical Research Council President Dr Glenda Gray and SA National AIDS Council CEO Fareed Abdullah.

The TAC has repeatedly exposed weaknesses in the Free State health system, called for the MEC to resign and last week held a People’s Commission of Inquiry into the poor state of the province’s healthcare.

Provincial Health Department officials attended the commission for less than 10 minutes, leaving when a group of men in the hall stood up and disputed TAC’s right to hold such an inquiry.

In retaliation for the TAC’s criticism, the provincial ANC Youth League organised a march in Bloemfontein in February, calling for the de-registration of the TAC.

Tensions between the TAC and its allies and the Free State health department and ANC, show no signs of abating. In the meantime, health services in the province are failing to deliver services and those who were helping to counsel and treat the sick, are being victimised. DM