Military is the new normal: The army’s extended Fiela deployment 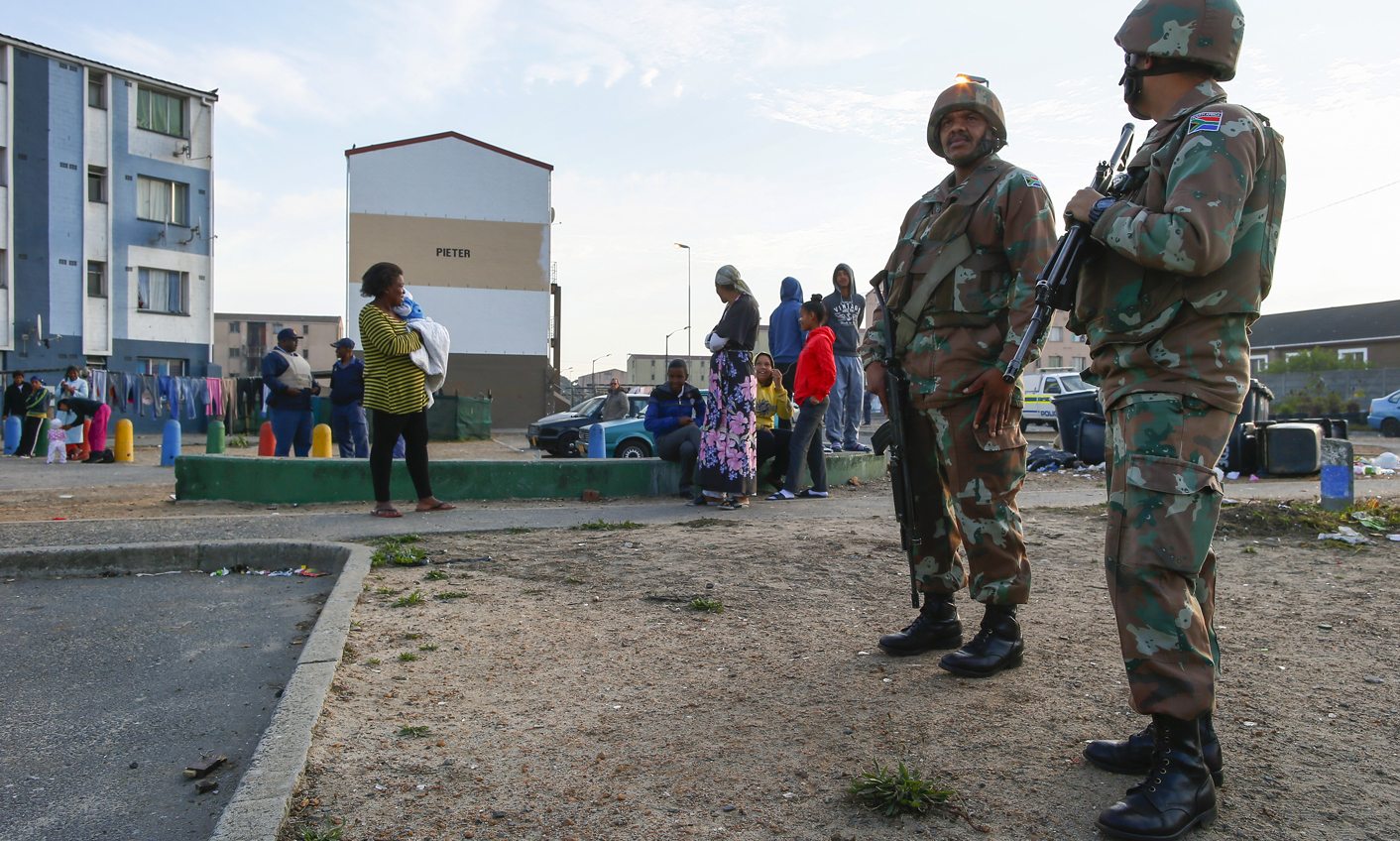 The South African National Defence Force (SANDF) can be deployed within South Africa as part of Operation Fiela-Reclaim until the end of March 2016. While officials say the army won't be an everyday feature on South Africa’s streets, critics claim domestic SANDF deployment is being normalised and becoming an “under the radar military regime situation”. By GREG NICOLSON.

After days of violence in Mamelodi fuelled by the taxi industry, Gauteng Premier David Makhura stood in front of community members on Sunday and said they would be protected. Operation Fiela-Reclaim had arrived. “We are a peaceful government but attack the community then you will see us in action, we will react. Commuters must be able to choose their own mode of transport based on their own circumstances,” the premier was quoted as saying. “We will even bring the army if need be.”

Makhura was speaking on 5 July, but according to President Jacob Zuma’s submission to Parliament, the SANDF had only been employed to operate within the country as part of Operation Fiela-Reclaim until 30 June. Daily Maverick confirmed on Tuesday the army’s deployment has been extended until 2016, allowing the SANDF to assist in situations such as the one in Mamelodi. The move has drawn further criticism that this kind of deployment has no place in South Africa’s democracy.

Inter-ministerial committee on migration spokesperson, Phumla Williams, and department of defence head of communication, Siphiwe Dlamini, confirmed the army’s internal deployment as part of the operation has been extended until 31 March 2016. Defence Web on Friday reported that a “reliable military source” going into a planning meeting said the SANDF’s deployment would be extended.

During the xenophobic attacks in April, Zuma announced the SANDF would operate within the country “to assist the South African Police Service (SAPS) to maintain law and order in KwaZulu-Natal, Gauteng and any other area in the Republic of South Africa as the need arises”. At the time, the deployment was directly linked to the xenophobic attacks and the president used his constitutional mandate to employ the defence force in co-operation with the police.

After raids on areas seen as xenophobic hot spots, Operation Fiela turned to general problems with crime. In a written reply to a 19 June question from the Democratic Alliance (DA), which the DA provided, in Parliament, police minister Nkosinathi Nhleko said Operation Fiela has been active in all nine provinces with 343 operations conducted in 99 cities, towns or townships, with 9,098 arrests. Information on how many people had been arrested, are out on bail, or are still in detention was not available, he said. In the operations, 27 illegal firearms and 39 weapons were confiscated. Drugs were also confiscated, including 287 kilograms of dagga, 623 grams of tik, 429 mandrax tablets, 2.3 kilograms of cocaine and 2.3 kilograms of nyaope.

The figures on arrests seem to clash with past claims. In June, the KwaZulu-Natal SAPS said, “Operation Fiela in KwaZulu-Natal continues raking in major success with joint operations between SAPS, SANDF, department of home affairs and Metro Police resulting in a total of 12,171 suspects being arrested throughout KwaZulu-Natal.”

Recently, the operation has continued. Police said over 500 arrests were made in Gauteng in the last weekend of June, listing charges of attempted murder, attempted robbery, driving under the influence of alcohol and reckless driving. In the Free State, police arrested 481 people in a week recently in connection with charges related to robbery, drugs, outstanding arrest warrants, and undocumented migrants.

Williams is on sick leave and couldn’t offer details of the SANDF’s extended deployment, but said, “It has been extended to March 2016”, via message. Dlamini explained that the extension allows the army to assist the police in the coming months without the administrative hassle of going through the process for another deployment. He compared it to the armed forces operating in the Democratic Republic of Congo, claiming that having to go through the paperwork every two or three months would “become a bit of an administrative nightmare”. He said the SANDF would not continually be seen on the streets, but if and when the need arises they will assist the SAPS. “It does not mean we will be on the streets every day, 24-hours, for that period,” he emphasised.

Military analyst Helmoed Heitman said, “Assuming the police actually need the support it makes sense they extend it until the job is done.” Still, he said, it’s a little confusing considering there’s no major unrest within South Africa. The SAPS are “being a bit lazy, a bit sloppy [and] the army is bailing them out yet again”, he added, pointing out the military has a much lower budget than police.

Others were more critical. DA shadow minister of police, Dianne Kohler Barnard, said the SANDF should only be deployed if it’s absolutely critical and after the xenophobic attacks have subsided that reason has expired. “The shoot-and-kill-the-enemy defence force are now going to be deployed inside our borders,” said Kohler Barnard. “This is like an under-the-radar military regime situation. I’m very uncomfortable with it.” Her colleague Kobus Marais, newly appointed DA shadow minister of defence, said his researchers have been searching the government gazette for details of the extension but have found nothing. “We don’t support it. We don’t think this is necessary. Obviously we weren’t informed.” Marais could not see how it benefits South Africa’s democracy and said it sets a dangerous precedent.

Access to information organisation Right2Know has written to the presidency asking for details of the SANDF’s extended deployment and whether Parliament has been informed.The group’s Murray Hunter told GroundUp on Tuesday, “Operation Fiela is unfolding as a deeply non-transparent project, with a mandate that is ever expanding and no apparent limit on its time-frames. It’s clear that many people have concerns with Operation Fiela in general, and the deployment of the army in particular. It’s clear that there are concerns about Fiela’s legality, its cost, and what it’s even trying to achieve.”

She claimed that since the 1996 White Paper on Defence said the SANDF should only be deployed domestically in exceptional circumstances, people have been preparing the ground for the normalisation of ongoing military activity within the country for years. Duncan believes there might be both a resource grab for extra funding and a desire to crack down on labour and community protests. The full extent of military activity within the country is not known because the executive fails to account to Parliament, she argued.

After Operation Fiela raided areas in downtown Johannesburg in May, Lawyers for Human Rights recently went to court for an urgent interdict to stop the raids. Their clients represent the horrors of Fiela – asylum seekers forcefully detained and then denied legal representation, with the state repeatedly defying court orders. They argued the early morning raids and entering people’s homes without a warrant, as well as the rights denied to their clients, were unlawful and unconstitutional. The court found the lawyers failed to prove the operation was an ongoing trend and therefore was not an urgent matter.

Zuma’s spokesperson Harold Maloka on Tuesday referred Operation Fiela matters to Phumla Williams, who while on leave was unable to elaborate. But during a recent briefing minister in the presidency, Jeff Radebe, said, “We are through this operation reclaiming our communities.” Co-operative governance and traditional affairs minister, Pravin Gordhan, one of the 13 ministers that are part of the inter-ministerial committee on migration, added, “There are many areas in South Africa where we don’t have a normal situation – this will help create a system of normality, where different arms of the state are working in a highly co-ordinated way to lead systemic change.”

But since the operation has turned from xenophobia to “crime-combating” and the army’s deployment has been extended, soldiers could continue stopping, searching, and raiding on the streets any time until March next year. DM