Parliament and the courts: An ongoing bonanza for lawye...

Parliament and the courts: An ongoing bonanza for lawyers 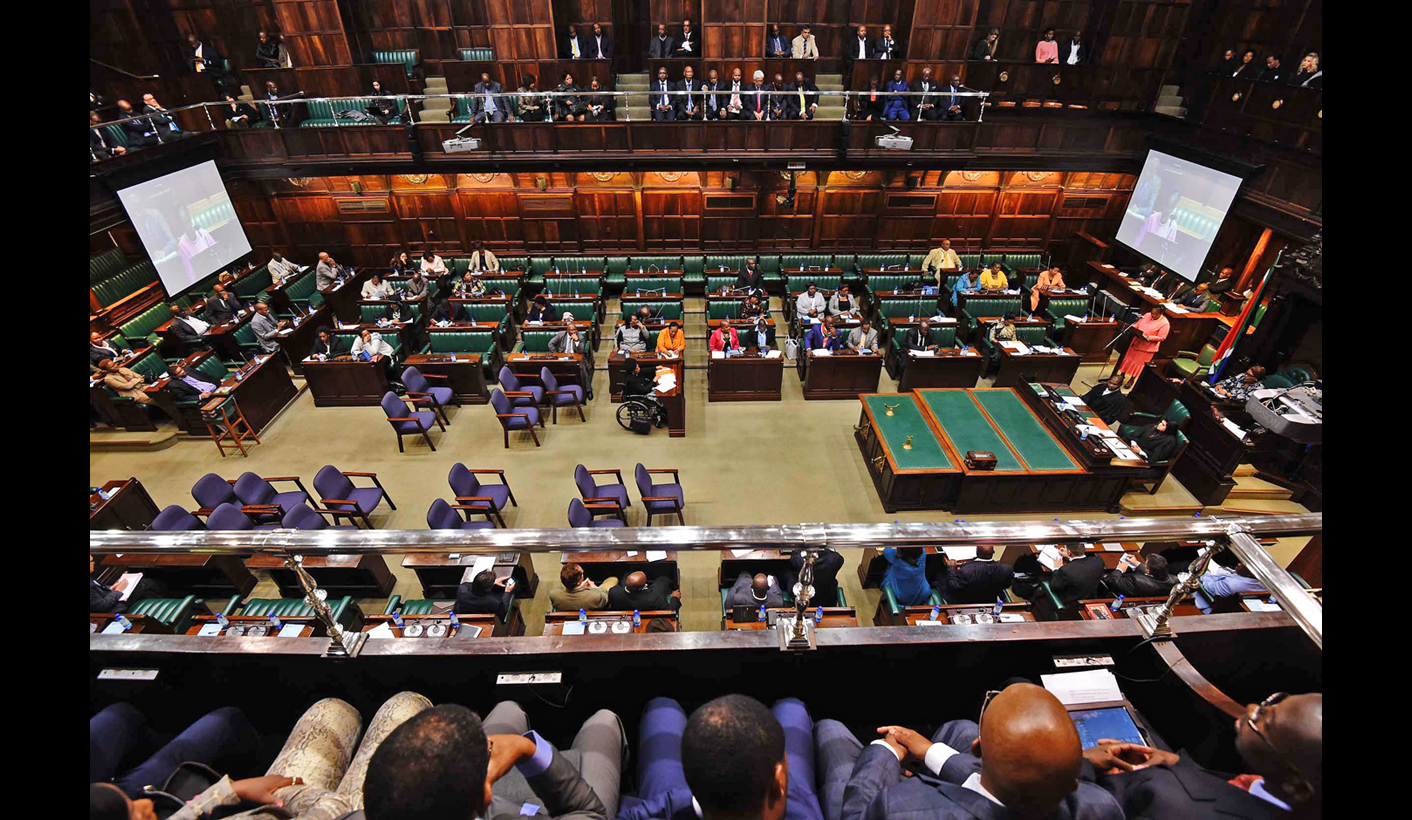 On Tuesday, the Western Cape High Court ruled on one matter affecting Parliament: whether police can be called in to arrest unruly MPs. That leaves at least two legal matters outstanding: whether Speaker Baleka Mbete is fit to hold her position, and whether Parliament’s broadcast feed should show the public the full, messy picture of disruption. It’s never been a better time to be a lawyer for Parliament. By REBECCA DAVIS.

South African judges have made it clear in the past that they are not enthusiastic about being drawn into political disputes. “Courts do not run the country; they are there to police constitutional boundaries,” Judge Dennis Davis said in November 2012 when delivering a ruling on whether the judiciary should compel Parliament to debate a motion of no confidence in President Jacob Zuma on that same day.

Despite Davis’s appeal at the time that judges not be called upon to dictate Parliament’s business, approaches to the courts to settle disputes about how Parliament is run show no sign of ceasing. This week alone, the Western Cape High Court saw two such matters on its roll.

We’re seeing a certain consistency in how Parliament’s legal representatives fight the institution’s corner: with reminders that the Constitution confers the authority on Parliament to control its own affairs, and appeals to the common sense dictum that parliamentary officials must be given the scope to maintain order. On more than one occasion, lawyers have sought to win judges over by comparing the National Assembly to a courtroom, with the Speaker in the role of a judge tasked with maintaining control in the face of provocation and disruption.

In the case concluded on Tuesday, between the Speaker of the National Assembly and the Democratic Alliance, the ruling of the three-judge bench again revealed a reluctance to be drawn into anything wider than strictly necessary. The judges articulated constraints on “what this case is not about”. They were not ruling on whether the Speaker was justified in throwing out the EFF during the State of the Nation Address. Their sole concern was the interpretation of one section of Parliament’s Powers and Privileges Act.

This legal tussle centred on whether it is permissible for police to be deployed in the National Assembly to arrest MPs. Section 11 of Parliament’s Powers and Privileges Act provides for “a person who creates or takes part in any disturbance in the precincts” to be arrested and removed. The DA contended that the “person” mentioned there shouldn’t be interpreted as an MP, because elsewhere in the Act MPs are specified as distinct to “persons”. The respondents argued the opposite.

The judges ruled that it was possible to interpret “person” there as including MPs, but that the broader bone of contention was the mention of “disturbance”. The very wide potential definition of “disturbance” was judged problematic, since it could infringe on MPs’ freedom of expression.

Courts have consistently recognised that MPs’ right to voice the needs and views of their constituencies freely must be of paramount importance, the judgment noted. As such, Section 11 was found to be “overbroad” and unconstitutional because of the provision it made for MPs to be arrested on the floor.

The ruling was greeted – and reported – in some quarters as meaning that police can now never enter the National Assembly again. Newly-elected DA leader Mmusi Maimane tweeted in response: “We have won our case to ensure that Speaker Mbete & the ANC never send the SAPS into Parliament, stopping us from fighting for the people of SA”.

In fact, this is not the case. The ruling reiterated that Parliament has “more than sufficient tools to maintain order in its precincts” – including Section 4 of the Powers and Privileges Act, which continues to allow security forces to enter Parliament and take action “to prevent immediate danger to life or safety of any person or damage to any property”.

What the ruling does – if upheld by the Constitutional Court – is prevent MPs for being arrested for what they say in the House. The ANC claimed that the DA’s victory in this regard was largely meaningless because MPs have never previously been arrested for utterances in Parliament. “It has never been the intention of either the presiding officers or the Act to arrest MPs on the basis of their utterances,” ANC Chief Whip Stone Sizani said in a statement.

One of the other consistent aspects of these cases, however, is that they tend to be greeted as monumental victories by the successful parties and dismissed as academic exercises by the losers.

In response to the other case before the Western Cape High Court this week – where the smaller opposition parties seek to have Speaker Baleka Mbete removed from her post for bias – the ANC accused “deep-pocketed political parties” of seeking media publicity through “frivolous” cases.

In this application, brought by Agang, Cope and the United Democratic Movement, the parties argue that the fact that Mbete is both the ANC’s National Chairperson and the Speaker of the National Assembly leads to partisanship.

Their application painstakingly rehashes a number of different occasions within Parliament which they say demonstrate Mbete’s bias. They also cite some instances of Mbete’s behaviour outside Parliament: comments made during media interviews, for example, and the occasion in February when Mbete referred to EFF leader Julius Malema as a “cockroach” at the ANC’s North West provincial conference.

The parties list events in September last year, when Mbete addressed ANC supporters outside Parliament from a SAPS vehicle, as evidence of both “partisanship and a misuse of state resources”. They also point to the fact that the Speaker sat next to Deputy President Cyril Ramaphosa in the National Assembly in the same month while a motion of no confidence in her was ongoing.

Mbete says in response that she welcomed supporters to the “people’s Parliament” because they had travelled long distances, and that she remained in the House during that debate “so she could hear for herself what Members had to say about her”.

The matter has been postponed until August after Parliament’s legal team requested more time to prepare their defence.

Though it’s hard to imagine that particular application meeting with success, past court judgments have made important and necessary changes to parliamentary procedure. One such case was in 2012, where as a result of a Constitutional Court application brought by IFP MP Mario Oriano-Ambrosini, it became possible for MPs to introduce private members’ bills without having to obtain the permission of the House in advance.

Judgment hasn’t yet been delivered in the case of whether Parliament can cut its broadcast feed at points of unrest. Further legislation, meanwhile, is ahead.

Emboldened by Tuesday’s ruling on police in the National Assembly, the EFF has indicated that it is coming after Mbete in the courts next. Spokesperson Mbuyiseni Ndlozi said in a statement that the EFF would “make sure Parliament pays for removing the entire caucus of the EFF using the police”.