Yes, but could Mmusi be SA’s president? 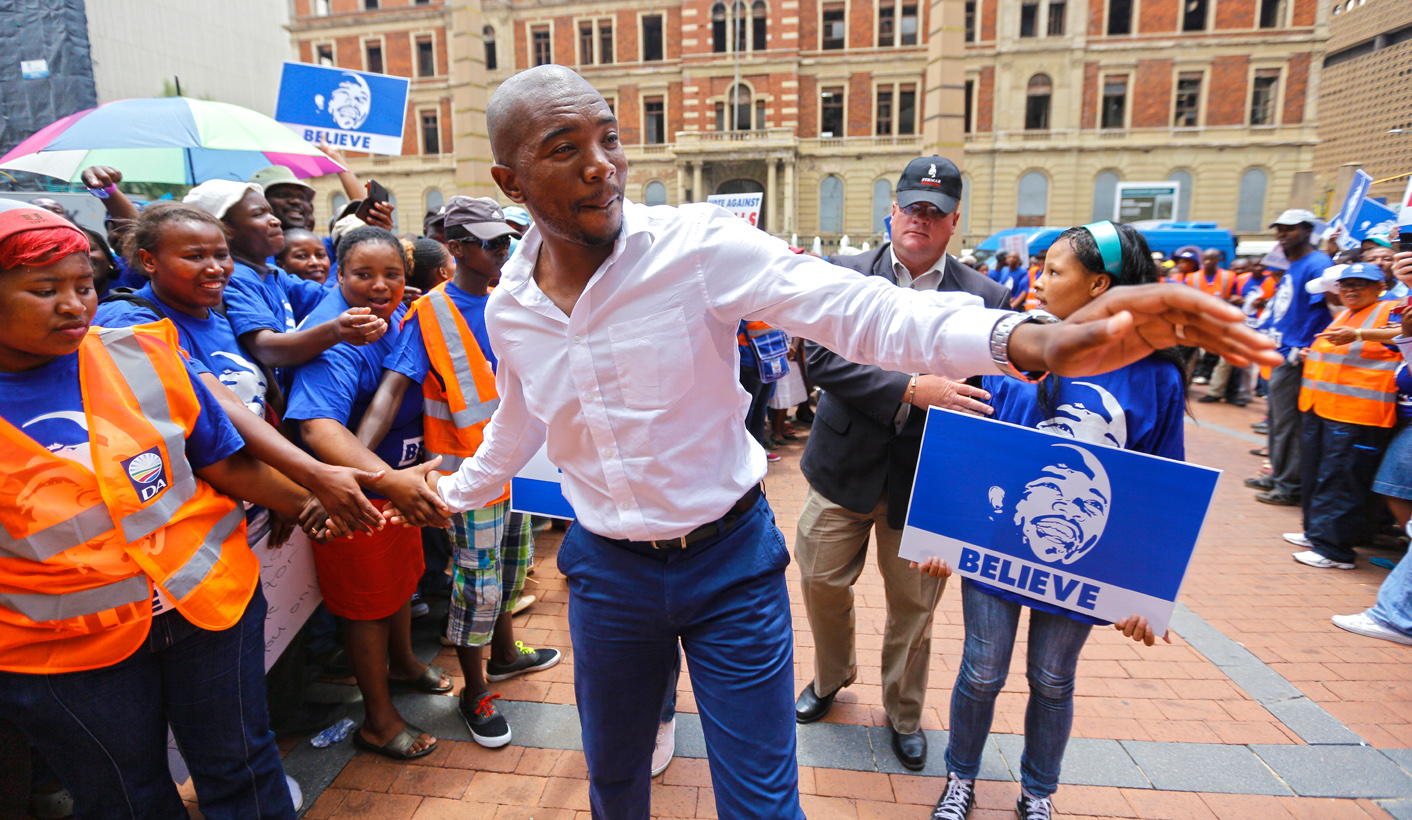 That should be the question uppermost in the minds of the 1,426 voting delegates who will chose the new leader of the Democratic Alliance (DA) next weekend. There has been much focus on Mmusi Maimane being the first black leader of the DA and whether he or his contender Wilmot James better represent the party’s liberal value set. But the DA is not merely choosing a replacement for Helen Zille, who would also be confined to governing the Western Cape. Nor are they voting to endorse the Leader of the Opposition in Parliament. What they are in fact doing is choosing the DA’s candidate for president in 2019. By RANJENI MUNUSAMY.

It doesn’t quite roll off the tongue yet, does it? That is in fact what the PR team behind Maimane’s flamboyant campaign for DA leader should have factored in while trying to sell him as the coming man. Maimane, 34, has been presented as the full package of what a formerly white party now appealing to a mass black constituency should be like. He is smart and savvy, energetic, charismatic, unthreatening to the DA’s core support base and most of all, a clean-cut Soweto boy who did good.

For someone who debuted on the political scene only in 2011, he is now one of the most recognisable politicians in the country, thanks to rapid fast-tracking through DA leadership process. From the DA’s mayoral candidate in the City of Joburg to the party’s national spokesman to the DA’s candidate for Gauteng premier to parliamentary leader, Maimane has been malleable for any position going.

The stars certainly seem to be lined up for Maimane to make it to the top. When former DA parliamentary leader Lindiwe Mazibuko decided to quit due to a fraught relationship with Helen Zille, there were already concerns in the party about whether Maimane had the political weight to take up that post. He seemed too packaged and too inexperienced to assume the most prominent opposition position on the national stage.

That was just a year ago. But Maimane proved that he has mettle and can punch above his weight and survive in the big league. That was no easy task. From his front bench in Parliament, Maimane faces a throng of people with the might and history of the African National Congress (ANC) behind them. Many of them, including President Jacob Zuma are liberation fighters, people who have been in politics longer than he has been alive.

Alongside him in the opposition benches is Julius Malema, a few months younger than Maimane but far more experienced in politics. Malema is a radical who abides by no rules and has made it his mission to upset the political applecart. It is a tough act to compete with when you are desperate to assert your presence and leadership.

Maimane also had the additional challenge of having to take on Zuma without being perceived as abrasive and disrespectful. The DA’s internal research apparently showed that focus groups perceived Mazibuko as being rude, and that had been a turn off to target black constituencies. So Maimane had to get the balance right – be hard but not offensive.

Just a few months in the job and now he is faced with a new challenge. The DA’s main priority is to grow its support base, particularly in black communities. Maimane has proved himself to be energetic and charismatic on the stump but he has not been in politics long enough to prove that he could be the biggest draw card as a figurehead.

He is up against 61-year-old Wilmot James, an academic turned politician who is an old school-type politician. James is far weightier in policy and a purist when it comes to political ideology. While Maimane looks good on billboards and can sway the crowds, James is more forthright and articulate of issues. But the bigger personality is likely to dominate this race and Maimane is certainly that.

An email alleging a sex scandal involving Maimane and his key supporters is unlikely to change voting patterns at the DA’s congress in Port Elizabeth next weekend. Sex scandals have little impact in South African politics and the timing of the release of the email does raise suspicion of a smear campaign. There seems little that could stand in the way now of Maimane’s downhill run to the finish line.

But while Maimane might be the best candidate to grow the party and to lead the 2016 local government election campaign, is he the best person to represent the DA as presidential candidate in 2019? By that time, he would have been in politics eight years, a lot more experienced than he is now, but still an infant compared to who he will go up against.

James’s campaign could have been more formidable if he had the direct backing of perhaps the only person who can break Maimane’s charmed ascendency.

If suggestions were more direct that James’s leadership was preparing the party for Mazibuko’s return, when she would be presidential candidate, that could have changed the dynamics. Mazibuko is young and inexperienced too as compared to the possible opponents, but she has grit and would certainly shake up the party. She proved to be popular on the campaign trail last year, and as DA parliamentary leader, showed she can go toe to toe with the big guns in the ANC.

But it would be difficult for the DA delegates to make decisions now based on the loose alliance between James and Mazibuko’s supporters, and what might happen in the future. Maimane has already been endorsed by some of the most prominent personalities in the DA, and their constituencies are likely to follow suit.

Maimane might be presented as the “everyman” for now, but when he is elected, he will quickly have to convert into The Man. He has to step out of Zille’s shadow, unite the disparate factions, and try to win the confidence of James’s supporters. He has to go from poster boy to being the real deal, particularly in communities where the DA is struggling to make inroads.

The DA’s main target constituency is precisely what Maimane represents: young, ambitious black professional trying to ascend the ladder. He could win over that constituency depending on how he carries himself from now on.

Perhaps in four years, he could grow into South Africa’s consummate presidential candidate. That is the real prize, not hyped-up primary happening next weekend.

And maybe five years from then, in 2024, President Maimane won’t sound that peculiar. DM