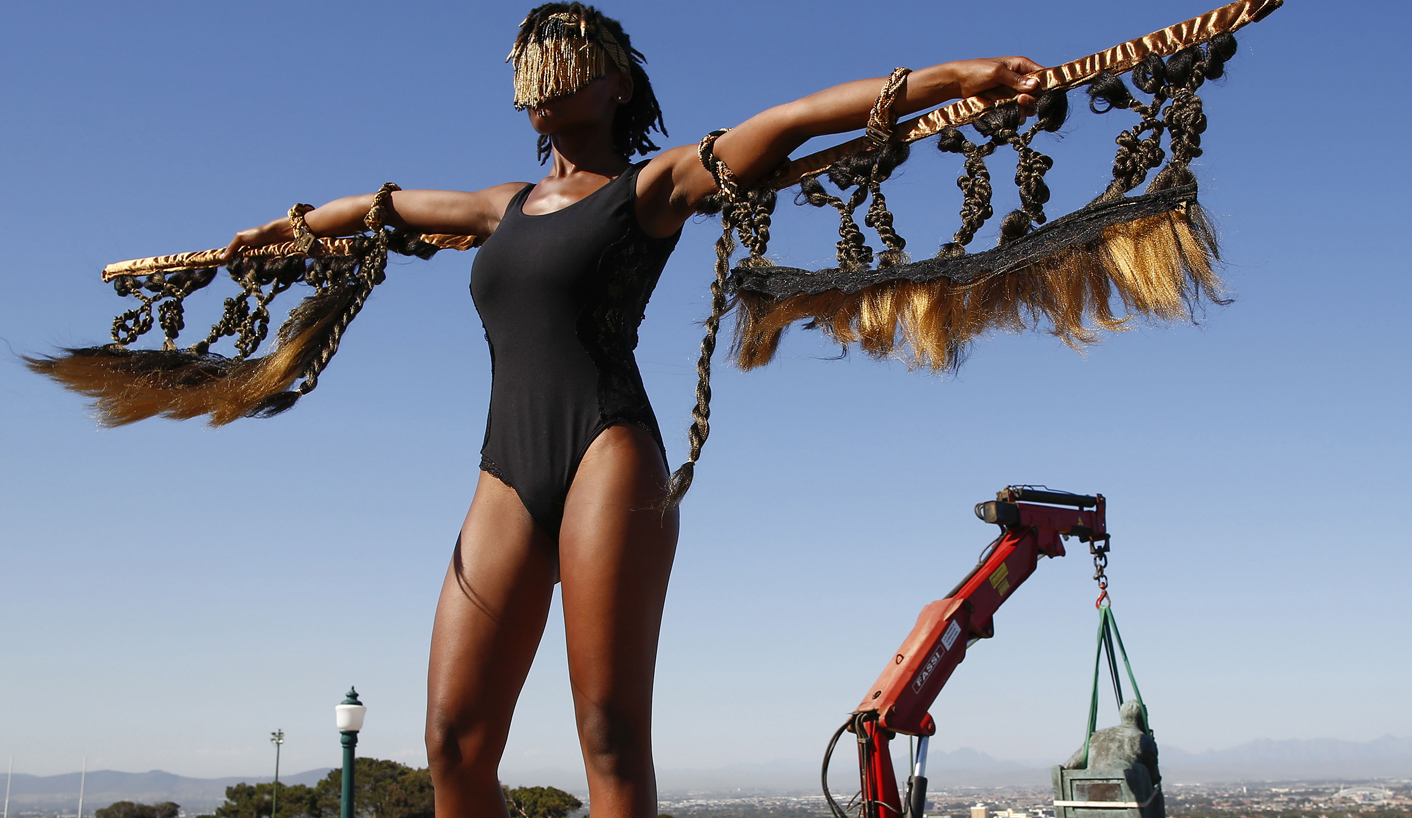 Rhodes has now fallen. Now the question, as always, is what should we do next. University of Cape Town students are not alone in their anger. Statues in Port Elizabeth and Pretoria have been defaced, and the State Security Agency forgot to put their jammer on again in Parliament to protect the Louis Botha statue. This issue is not going to go away, for the simple reason that we have never really dealt with our past; the trauma is still with us. By STEPHEN GROOTES.

We are now at the stage where we start to analyse what could have been done better. Already, the chairperson of the council at UCT, Archbishop Njongonkulu Ndungane, has said there has been a lack of leadership from your department over the last few weeks. It is hard to disagree with him. While you have been a part of the debate, you have primarily repeated yourself in claiming that people should not deface statues or damage property but should follow proper procedures. Allow me to make a few suggestions.

Your party, the African National Congress (ANC), which has a very good story to tell on reconciliation, has also been behind the curve, issuing statements indicating establishment ire at defacings, but giving no real direction.

That this is an emotive issue is self-evident. This makes it easy for politicians, whether they wear red, or black green and gold, or blue, to abuse it. It is the easiest thing in the world to make a symbol or a statue a political issue; it fires up your base, and puts your opponents on the back foot. Imagine how you would feel if the Democratic Alliance administration in the City of Cape Town decided to rename streets or remove statues of ANC figures. Or if in some future administration, a government of another party decided to rename stadiums in Durban. This makes it imperative that we find some objectively neutral way to deal with this, some way that will be acceptable at least to the overwhelming majority of us.

Otherwise, as has already happened, these debates will always be dominated by the extremes, and the majority, silent as it may be, will be ignored.

So, let’s suggest some criteria by which we could decide whether a statue that is already erect should remain.

The first, obviously, is whether that person has historical significance. Flowing from that, we should ask what role they actually played, whether they are someone who is seen as offensive, in the way that a statue of Hendrick Verwoerd may be, or someone almost politically neutral, as say a statue of Wolraad Woltemader may be. Of course “offensive” is going to be hard to define. For example, many people may feel that Paul Kruger was offensive, because he was clearly, by the standards of today, racist. But, as Freedom Front Plus leader Pieter Mulder has pointed out, that would mean we would have almost no statues of white people. And by those standards someone like Abraham Lincoln, who went to war against slavery but would have been unlikely to welcome a black son in law could not be honoured. And our history is not just that of the Struggle, we are about more than the fight between white and black.

This means the definition of ‘offence’ will have to be tighter. If that person could be directly tied to racist acts, to the exploitation of black people in a way that could not be countenanced now may get us some of the way there.

Then there is the changing nature of history. Louis Botha, whose statue was defaced on Wednesday night, is no longer a household name, except as a synonym for traffic frustrations. A straw poll of people around me yesterday showed that almost everyone my age and older, black and white, knew who he was. Everyone younger (sadly, most of them) had to think for a while, or did not know. That he was a Boer solder, farmer and statesman is obviously true. Did he have black workers on his farm? Probably. Was he the first leader of South Africa as a nation state? Yes. That historical significance may push above what is a considerably lower level of offense than Verwoerd would cause. The same will probably hold true for many statues currently dotted around our landscape.

Another criterion would be whether the statue or symbol is placed in a position in which it is being celebrated. Allow me to explain. The statue of Nelson Mandela at the Union Buildings is a celebration of Madiba. Quite rightly, it is in the prime spot. A statue of Barry Hertzog (also known now as a source of traffic frustration) was moved, and placed in a less prime spot. He is still there, you can see him if you like, but it is not being celebrated in the same way. This would mean then that Paul Kruger, currently under guard by a pair of un-gifted singers, is also in a place of celebration in Church Square. Perhaps he could be kept, but moved.

Photo: Afrikaner members of the Boere Kommando stand at the base of the memorial for Afrikaner hero Paul Kruger in central Pretoria, South Africa, 08 April 2015. Members of the leftist Economic Freedom Fighters (EFF) party are suspected to have painted the statues of the monument after a controversial country wide debate over statues of former colonial and apartheid leaders. White Afrikaaners had announced to protest and to chain themselves to the Paul Kruger statue to prevent a possible dismantling. EPA/KIM LUDBROOK

This may help us to answer those who claim that to remove statues is to erase history. Of course it is not, but it should allow history to be commemorated and remembered, but for people who killed or exploited black people to no longer be celebrated.

Another criterion may be the context in which the statue is placed, relative to newer statues of other people. In other words, if Kruger is a historical figure, is he placed in a context with other people, say an unknown soldier from the SS Mendi, which went down during World War I with hundreds of mostly black South Africans onboard.

There must surely be other criteria that should be considered, wiser people than I will be needed to put them all on a list.

This brings me then to the people who will have to do the adjudicating. Minister, this is too sensitive an issue to be left to Parliament and political parties. In fact, it would probably be best if no active party members were involved at all. This can’t be a situation where we all know at the outset of a discussion what the end result will be, like say Parliament’s various committee discussions around Nkandla, or the Protection of State Information Bill. This must be left to people whose minds can be changed.

As a start, several people who were part of the Truth and Reconciliation Commission may still be available. Advocate Dumisa Ntsebeza, who is currently chairperson of the SA History Archive, might be a good place to start. You also need a real thinker, say a Steven Friedman, someone who can assess political arguments well (not that Ntsebeza is not a thinker, as anyone who’s ever tried to argue against him will attest to). Then you need a few people who can bring some real spirit, or gees, or just a sense of humanity to the whole thing. Who can make someone who will be on the losing end of an argument feel listened to. Jonathan Jansen is probably your guy for that.

And of course, it will be important to have a group of people who will understand different aspects of our history. It will be crucial to have someone who feels the history of Kruger rather than knows it, and the same for the history of Shaka Zulu.

Minister Mthethwa, this issue is not going to go away. It will come back again and again. The danger lies in that people for their own political advantage could use it, as your party has already accused of the Economic Freedom Fighters of doing. We need to resolve this, we need to be more actively resolving this.

I’m afraid much of the responsibility is going to rest on your shoulders.

Photo: An arts student performs a silent protest infront of the statue of one of apartheid’s architects Cecil John Rhodes which is bound by straps connected to a crane prior to its removal from the University of Cape Town (UCT), South Africa 09 April 2015. EPA/NIC BOTHMA