Op-Ed: Statues of thought and symbols of resistance 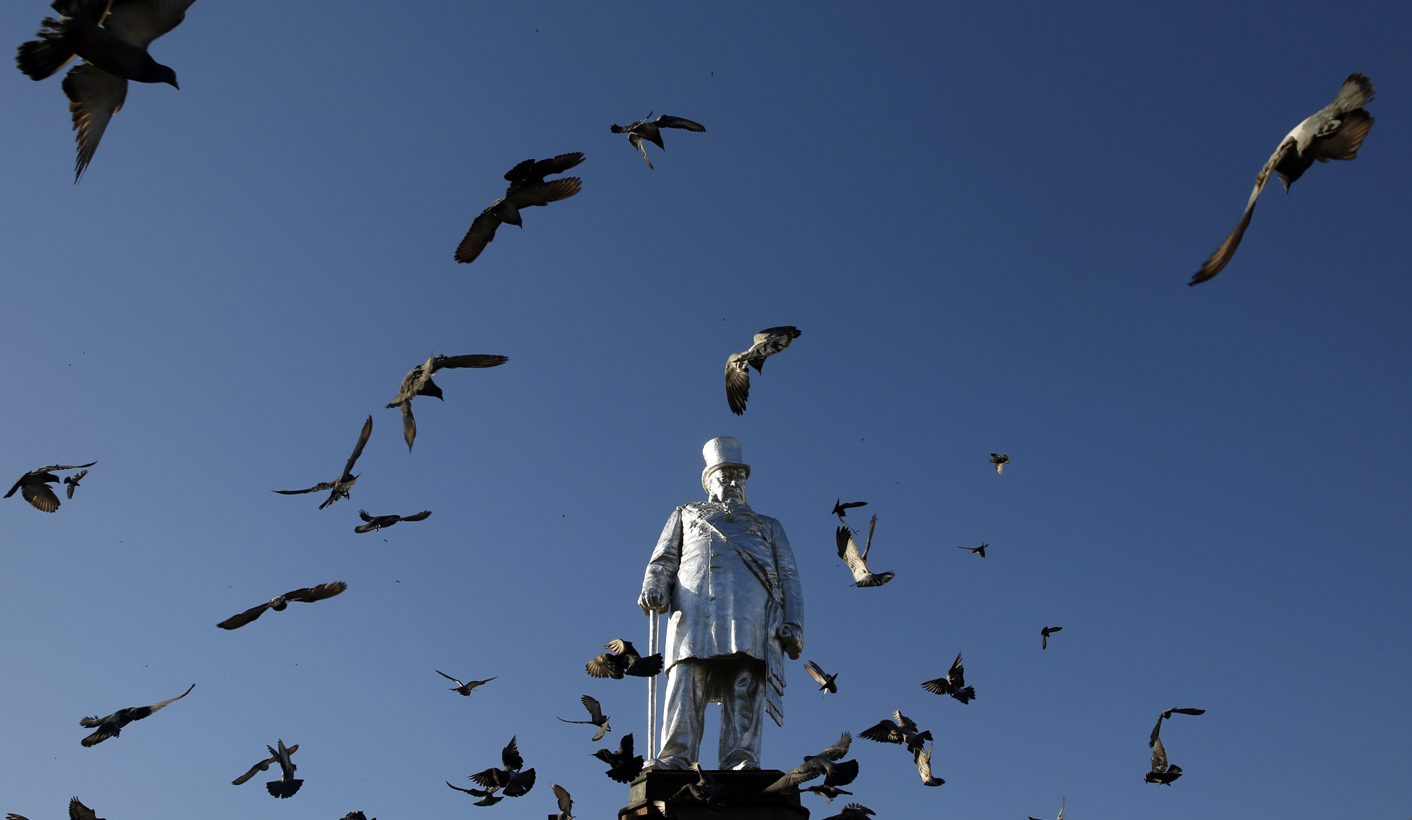 While the protests against the statue of Cecil John Rhodes at the University of Cape Town appear to have achieved a result, the right wing rallied on in Pretoria and Cape Town on Wednesday. They prove the impact the students have had. GREG NICOLSON reflects on statues and symbolism in the transformation of white spaces.

Wearing a cardigan over a pinstriped shirt, with a white bushy beard and grey hair, Piet “Skiet” Rudolph focused his gaze between thoughts. “I cry for my people. The pain that is coming is enormous,” he said over tea when we met a couple of years ago in a Pretoria café. As an Orde Boervolk leader, Rudolph stole a cache of guns from an Air Force base in 1990, one of which was later used to kill Chris Hani. He wanted to kill FW de Klerk during the negotiations, he said, but the AWB’s Eugene Terre’Blanche didn’t agree with the idea.

Rudolph lamented the Boer’s (not Afrikaner’s) loss of language, jobs, and culture and advocated for the return of the Republics – Free State and Transvaal. Reflecting on Red October, which had just marched under the banner of “raising awareness about the inhumane slaughter and oppression of the White Ethnic Minority”, Rudolph said its leaders were “not there yet”. They and many young Afrikaners still want to work within one nation, which Rudolph couldn’t fathom. “The only solution that is not going to work is integration, and that is what they are trying in South Africa,” he said.

On Wednesday, leaders of Afrikaner interest groups, including Red October, picketed in Pretoria’s Church Square after the monument to Paul Kruger – Voortrekker, resistance leader, Transvaal president – was vandalised with green paint following student protests against a statue of Cecil John Rhodes at UCT, which led to attacks in certain parts of the country on statues erected by the white regimes.

While the UCT protests eventually drew out the right wing, raising the spectre of past racist injustices, the #RhodesMustFall campaign symbolises much more.

“Give the Boere Afrikaners their independence,” read placards on Wednesday, reflecting the view of Rudolph, who represents a tiny minority of Afrikaners. Such protests will have little influence, but just like at UCT, they reinforced the importance of symbols in the country’s ongoing transition. In Pretoria and Cape Town the demonstrators waved the Vierkleur and sang the old national anthem while protecting statues of leaders long dead.

The symbols represent who they are. “My tribe is dying,” Steve Hofmeyr, linked to Red October and in Church Square on Wednesday, is reported to have complained in the past. Hofmeyr claims his people are being eviscerated by genocide, which is outrageously untrue, with the collective oppressor appropriating the language of the victim (as if enough hadn’t been stolen). But he, Rudolph and their supporters believe the claim and hold onto their tokens of the past, which form part of their identity.

Those symbols and the brutal regimes they represent are now relics, pushed to the fringe as South Africa moved into democracy. But with these most obvious symbols gone, what’s often ignored is just how much of the past remains after the legislated brutalities were shifted to history and the Apartheid Museum.

We still operate on the unequal and bigoted socio-economic conditions generally talked about in the past tense. In schools, universities and workplaces black people still face hurdles that white people don’t and many whites refuse to adjust their perceptions of race to put themselves on an equal footing. Despite hundreds of years of oppression against blacks, whites often see affirmative action initiatives as an injustice, even though the large majority of black people still face systemic challenges just trying to work towards a sustainable and dignified life.

Over 20 years into democracy, after hundreds of years of brutality, things haven’t changed fast enough. The ANC could have done better, clearly, but spaces described as the avenues to opportunity, universities and professional workplaces, remain white, exclusive, often only tolerating a rainbow-nation-trickle of blacks who face extra hurdles. If they fail, their performance reflects a race. If they succeed, well, what an exception!

That’s what the protests over the statues are about. The specific legacies of Rhodes and Kruger are largely meaningless. They represented a system that oppressed and in a post-Apartheid society where racists only officially emerge under the extreme right-wing (or on social media), the statues are a symbol of all that remains to be done, of real transformation.

While almost everyone seems to want change, they want it without fuss, without shaking the status quo. They want to open a conversation (maybe an inquiry?) within the current system while their symbols of being remain untouched. But that leads to stasis, as it has, with the idea of transformation dropped into white noise.

UCT’s protesters have managed to do something different. It might be messy, but this is politics, not a classroom. The #RhodesMustFall campaign recognised that symbols matter. Symbols are vessels of identity and knowledge of the collective and its power. What’s a flag, street name, anthem, jersey or statue but something that emotionally ties us to who we think we are, where we’ve come from, and what we represent?

Piet “Skiet” Rudolph wanted a volk, and Steve Hofmeyr yearns for a culture past. Neither is in South Africa’s future. What the UCT students have shown is that transformation is not achieved when fervent supporters of an oppressive system, like Rudolph and Hofmeyr, are no longer relevant. They’ve shown that the far more pervasive culture of “white spaces” and the discrimination and hardship they impose can be confronted. They just had to find the right symbol to get it started. DM

Photo: Birds flock around a statue of Boer war leader Paul Kruger at Pretoria’s Church Square, October 21, 2014. The statue of the iconic Afrikaner leader has been covered in tinfoil by street artist known as r1 as part of the Cool Capital 2014 Biennale. REUTERS/Mike Hutchings