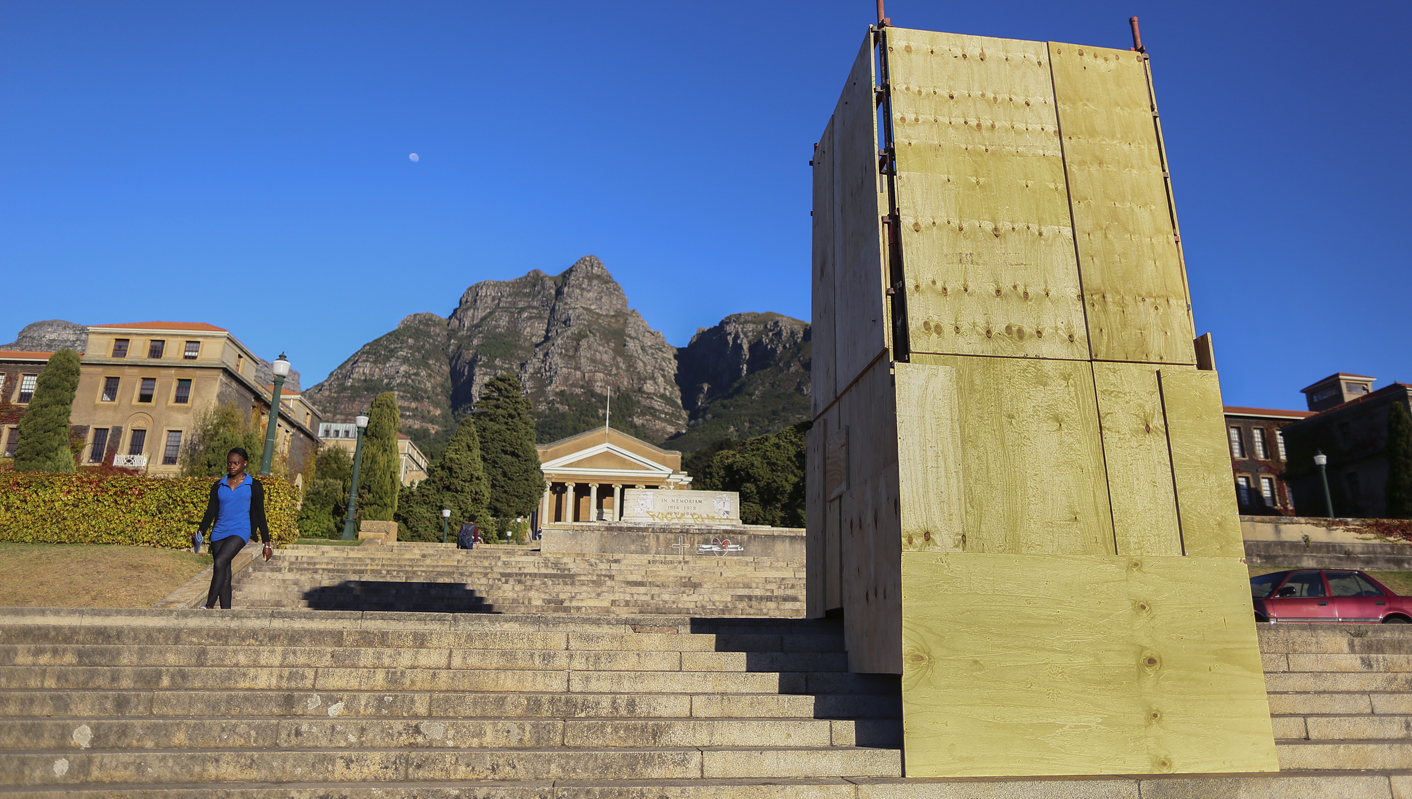 The fate of the statue of Cecil John Rhodes on the University of Cape Town’s campus has been sealed. Following a tumultuous evening meeting of the UCT council, Rhodes’ statue will be removed on Thursday. The unanimous decision of the council marks the culmination of almost a month of student protests – including students occupying the council meeting. REBECCA DAVIS was there.

“All Rhodes lead to the colonisation of the mind”, read a banner brandished by students gathered to hear the decision of the UCT council on Wednesday evening. Others carried newspaper placards anticipating “The Inevitable Fall of Rhodes”. The group of students numbered only a few dozen, but they were vocal and passionate. Toyi-toying and singing, they waited to hear the decision of the council. It was not expected to take long.

The gathering of the UCT council was an emergency meeting convened to vote on the future of the controversial Rhodes statue. In advance, its outcome was a foregone conclusion: statements from UCT vice chancellor Max Price had already indicated that the statue was as good as gone.

Weeks of protest began with a group of students led by Chumani Maxwele dousing the statue in excrement in early March, saying that its continued presence on the university’s campus was testament to the institution’s failure to meaningfully transform.

Days of public dialogues and panel discussions followed, together with an occupation of the university’s Bremner admin building spearheaded by students under the “Rhodes Must Fall” campaign. With Bremner renamed “Azania House”, the building has been functioning as a home base for protesters, who have been sleeping there.

All the UCT council was expected to do was rubberstamp the only reasonable decision under the circumstances. When all members are in attendance, the council numbers 30, but only 60% of these need to be drawn from the university’s own staff and students. The rest are eminent figures from diverse walks of life: retired judges Kate O’Regan and Ian Farlam have seats on the council, as does perpetual Constitutional Court also-ran Jeremy Gauntlett. Equal Education’s head of policy Yoliswa Dwane is on the council, together with Pick ‘n Pay’s CFO Bakar Jakoet.

Photo: “Rhodes Must Fall” campaigners await the decision of the UCT council on the fate of the statue. (Rebecca Davis)

Their meeting was anticipated to take 90 minutes at the longest, but as that milestone was reached and passed without word from the council, the students outside grew restive. After three hours, students began to bang on the doors of the venue – ironically, 2 Rhodes Drive – and yell: “It’s time!”

SRC president Ramabina Mahapa popped downstairs to attempt to pacify them: “We have already been informed that the statue is going,” he told the protesters. It wasn’t good enough. Students surged through the doors and within minutes had entered the chamber where the council was meeting.

Caught up in their midst was an American tourist, who had been passing the venue randomly and stopped to rubberneck. “Do black people hate white people in this country?” he had earnestly asked journalists a little earlier. Now he trotted up the stairs with the protesting group.

Members of council looked bemused but stoic when the protesters entered. “Down with white supremacy!” the students chanted. They moved on to a cry of “One settler, one bullet,” complete with machine-gun sound effects. The American tourist stood at the back with his camera held high, recording.

The SRC’s Mahapa again told the students that it was agreed that the statue would be removed, and the council simply needed time to “conclude on other business”.

The students refused to leave.

“No decision about us should be made in our absence!” one cried. Another said: “This meeting has not been legitimate until we stepped in. Where are the black women?”

Council head Njongonkulu Ndungane – the former Archbishop of Cape Town – tried to persuade the students to leave. “As you came into this door, the council was about to vote on a motion,” he protested.

A number of council members rose and attempted to leave, but students blocked their path. “If we let them go, we will never see them again!” one warned. With so many people in a small airless room, it became very hot. Some of the students commiserated with council members about the heat. Other students began to dance on the tables at which the council members were seated.

While the students’ insistence on disrupting a meeting at which they had been told their desired outcome would be forthcoming might seem irrational, it was clear that they were genuinely concerned that if they left the room without a concrete resolution, something might go wrong. They spoke of having been lied to before. They said the university’s stated timeframes on transformation were unacceptable.

“Maybe it’s good for the council to see the students’ anger,” Mahapa told the Daily Maverick.

Eventually a student leader identified as Pam was able to appeal for discipline. “There is a guest coming to talk to us at Azania House,” she told the students. “People in the movement, you know, we have a programme that we follow. And now we must move back to our home.”

The protesters were grudgingly persuaded of the merits of leaving the council for ten minutes so that the members could conclude their vote. “Please make the right decision, Father,” one student appealed to Archbishop Ndungane, squeezing his hand as he left.

Outside, students chatted in small groups. Earnest snippets of conversation were audible everywhere:

My mother is a kitchen girl, and now I’m supposed to come to UCT and smile with white people?

After a great deal longer than 10 minutes, the verdict came back: the vote was concluded, unanimously in favour of the statue’s removal. “We won!” a student yelled. “Amandla!” Council members hurried down the stairs to leave.

Addressing journalists, Ndungane paid tribute to the “orderly and deliberate” process which had led to the decision being taken. Vice-chancellor Price was similarly effusive. While this might have seemed a time of crisis for UCT, he said, on the inside things looked very different. Price called it a “profound and transformative” moment for UCT.

“We argue, we fight, and yet it is a fight without violence,” Price said.

Journalists pointed out that the scenes in the occupation of the UCT council chamber had not exactly been redolent with warmth. What about the ‘One settler, one bullet’ chant, we asked.

“The voice of protest must never be allowed to die down,” Ndungane replied. While the occupation of the chamber had revealed “deep anger”, ultimately students had agreed to leave.

Price termed the events “unfortunate”, but said that their peaceful resolution was “a victory for law and order and proper governance”.

Mahapa stressed, however, that from the perspective of the SRC the removal of Rhodes’ statue was only the first step. “The issue at hand is transformation,” he said.

Because authorities fear the statue may be destroyed, time is ticking to see it taken away for safekeeping. The Upper Campus of UCT is a provincial heritage site, so technically the university may not permanently remove any statue without permission. On this occasion, they have applied for a certificate of “emergency removal”. At 5pm on Thursday, Rhodes will be taken off campus to a storeroom that the university has hired to temporarily house him until a permanent home is decided on by Heritage Western Cape.

What will replace Rhodes? Probably not a statue, says Price; but a “renewed commitment to transformation”. DM