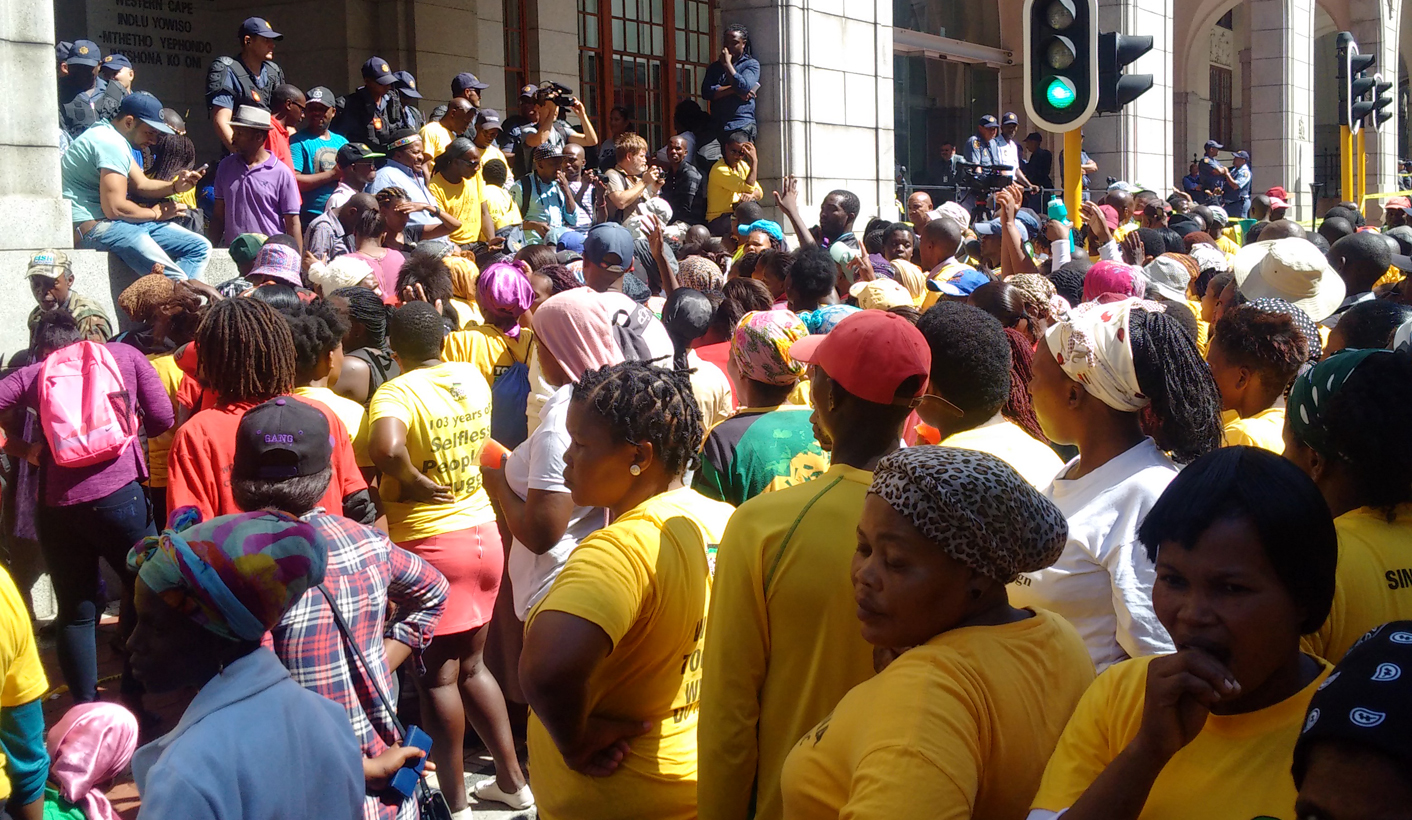 On Thursday, hundreds of supporters of social movement Ses’khona People’s Rights – the original poo-chuckers – marched to the Western Cape provincial legislature. The ANC Western Cape had put out a statement announcing that they would meet them there in support. Many Ses’khona members wore T-shirts stating “Ses’khona endorses ANC”. And yet when ANC provincial leader Marius Fransman tried to address the crowd, he was booed away. Politics is a bloodsport. By REBECCA DAVIS.

Police and officials were on edge ahead of Thursday’s Ses’khona march. Previous protests by the movement have ended in violence and looting. In October 2013, a march through the CBD led by Ses’khona leader Andile Lili saw small-scale traders on St George’s Mall robbed of their wares and car windows smashed.

Concerns over safety on this occasion were fuelled by rumours that Lili had made an appearance on a local radio station in advance to encourage marchers to bring hammers in order to smash shop windows – an allegation subsequently denied by Lili. A number of the marchers were, however, carrying weapons including planks and whips.

They were marching with demands which have stayed constant for Ses’khona for the last few years: housing close to the city, jobs, a detailed acknowledgement from the DA-run Western Cape government of their plight. It is this latter point that seems to be a particular sore spot for Ses’khona leadership. Western Cape Premier Helen Zille says that Ses’khona has repeatedly been engaged with by government, but it’s the nature of the engagement that Ses’khona seems to find lacking.

Lili told the Daily Maverick on Thursday that the movement wants to see a response from the Western Cape government which specifically acknowledges the different circumstances and challenges faced by – for instance – backyard-dwellers in Mitchell’s Plain, shack-dwellers in Khayelitsha, and so on.

“They only like to speak about accountability,” Lili said. “But they must start with the DA here! We must ask if they are really accountable to the people of Cape Town?”

This anti-DA rhetoric being music to ANC ears, it was unsurprising that the ANC Western Cape put out a statement on Thursday morning announcing that they were getting in on the action. “ANC Western Cape leader Marius Fransman & MPLs [Members of the Provincial Legislature] picket against Cape Times boycott & receive Ses’khona service delivery protest march at lunchtime, Zille’s Wale St office”, it read.

Fransman duly arrived – but when he attempted to speak, the crowd of three hundred was having none of it. He was booed off amidst heckles accusing him of being in league with the DA. Most of those booing him away were wearing T-shirts with slogans like “Ses’khona endorses ANC”, “Cape Flats stem [votes] ANC”, and just “Vote ANC”, with a picture of President Jacob Zuma’s face.

Why such hostility to the provincial leader of their party?

The relationship between the ANC and Ses’khona has long been a tumultuous one. Ses’khona leaders Nkohla and Lili previously served as ANC councillors before being expelled. In November last year, Lili was fired on four times by unknown gunmen the night before he was due to lead a march on the offices of the ANC Western Cape. At the time, Ses’khona leaders stopped short of directly blaming the ANC for the shooting, but insisted that the “attempted assassination” was a form of political intimidation.

When the ANC held its 103rd birthday bash in Cape Town in January this year, however, it was reported that the ANC’s national top brass had held meetings with Ses’khona leaders to make peace.

“The message from the ANC is clear: we support Ses’khona,” Minister in the Presidency Jeff Radebe told a rally in Crossroads. In the lead-up to the 2016 government elections, the ANC likely fears alienating the social movement’s leaders. Ses’khona claims to have a membership approaching 90,000, though its marches regularly attract only a fraction of these numbers.

The peace brokered between the ANC and Ses’khona clearly does not extend to the ANC’s provincial leadership, however. “We don’t want to see them in our marches,” Lili told the Daily Maverick. “They are not supporting us. They must go to hell.”

When the Daily Maverick spoke to Fransman on Thursday afternoon, Fransman suggested his very public rejection was the result of Lili’s personal desire to settle scores following his suspension as ANC councillor.

“The crowd was very positive after they were told that the [ANC] leadership was here and mentioned my name,” Fransman claims. He says it was Lili’s utterances to the crowd that “incited” them.

Fransman also alleges that the hostile reception he was given is evidence of a factional rift within Ses’khona leadership. He says that on Monday he attended a meeting led by Loyisa Nkohla at which Nkohla requested that the ANC attended Thursday’s demonstration, which is why the party announced its intention to participate.

“It is clear that there are serious tensions within Ses’khona,” Fransman said. “Clearly what Loyisa requested and what Andile did are two different things.”

Helen Zille did not come out to address the crowd, and the representatives dispatched on behalf of the Western Cape government – including Human Settlements MEC Bonginkosi Madikizela – failed to appease the restless Ses’khona supporters. After several hours in the sun outside the provincial legislature, and some warnings from the crowd that they were getting hungry, familiar scenes ensued.

A breakaway group stormed down St George’s Mall, knocking down some stalls and overturning restaurants’ outdoor tables. “They making kak in my shop,” one restaurant worker moaned repeatedly in the aftermath, surveying smashed glass. Two traders told police that leather handbags had been stolen from their stall, while a food stall was flattened within minutes.

Fransman claimed that ANC concerns about this outcome have also contributed to the frostiness between Ses’khona and the provincial leadership.

“We picked up a concern about possible plundering, and not proper crowd control, so we raised those issues earlier in the morning,” Fransman told the Daily Maverick. “That has upset [Lili] one way or another.” Fransman said that Lili should take “full responsibility” for the looting.

“We must never condone the looting of any stalls from informal traders,” Fransman said.

Lili, meanwhile, told the Daily Maverick that he was “not aware” of any looting, and that he had “spoken to them nicely” beforehand to tell Ses’khona supporters not to loot.

Lili hinted that if the ANC Western Cape did not change its current leadership, it stood to lose the endorsement of Ses’khona in the 2016 local government elections.