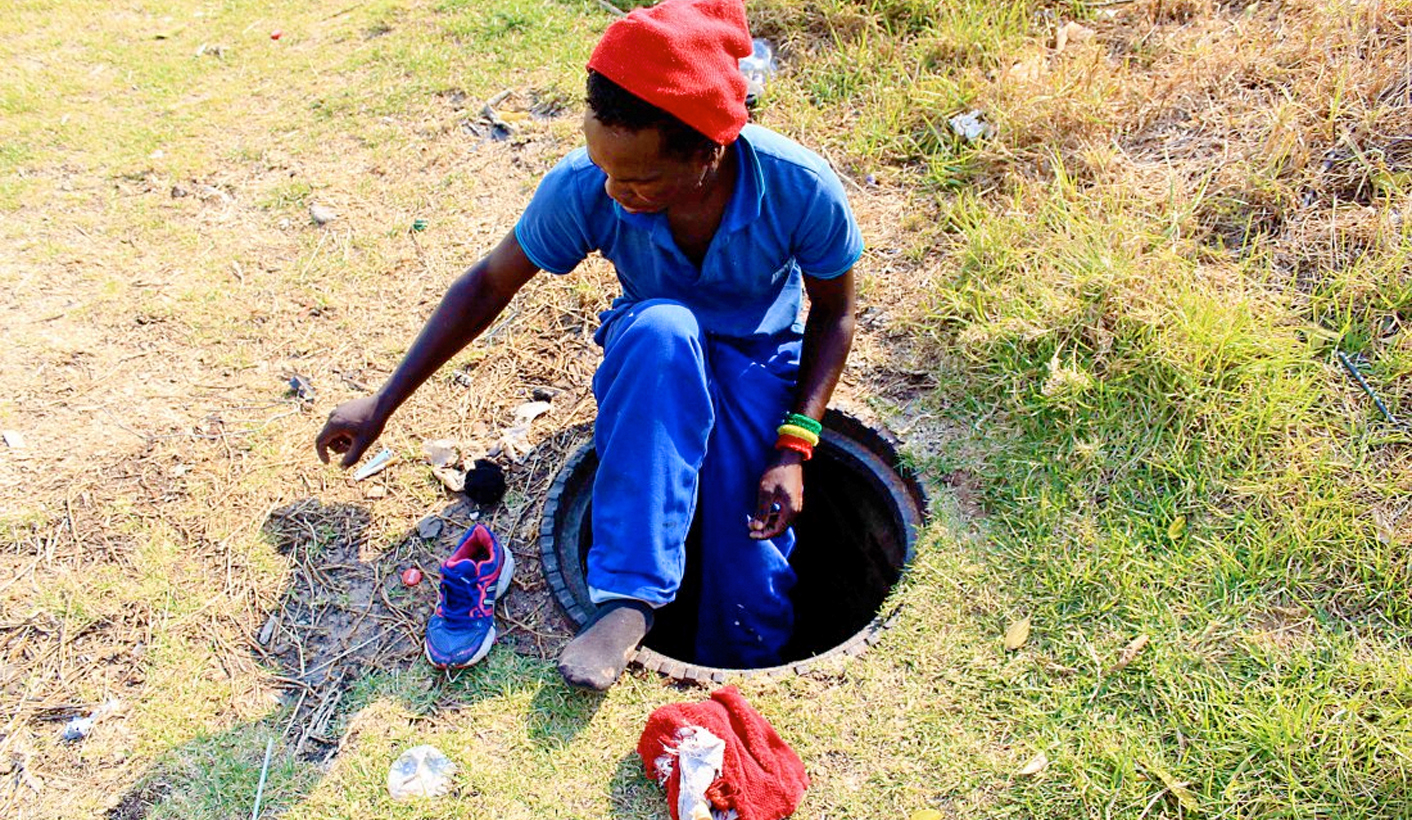 With the wind blowing strongly, it’s laundry day in the field not far from the new District Six flats, and washed clothes have been pinned down on the grass with bricks. On the horizon, Danny “Rasta” Mukwena is approaching with his friend and neighbour Edwin Shaba. Text by MARY-ANNE GONTSANA and pictures by MASIXOLE FENI for GROUNDUP.

Mukwena and Shaba are two of the dozen people who have made a place for themselves to live under the soil of this field.

Mukwena is one of a dozen people living under a field in District Six.

Looking down on the field from the top of the hill, plastic covers can be seen covering what look like holes in the ground. These are the homes of Mukwena, Shaba and the others.

“I arrived in Cape Town in 2011 from Venda,” says Mukwena, “after my cousin who lives this side called me and told me that there were jobs available. I came by bus.”

But he never managed to contact his cousin and ended up spending R40 a night from his savings to stay in a lodge.

“I stayed there for two weeks before I got kicked out because I could not afford to pay anymore.”

He found work on a construction site where he worked for six months. He managed to rent a room in Khayelitsha’s SST for R350 a month but after a year was told to leave because he could no longer afford the rent.

“I started living on the streets of Cape Town because I had nowhere to go. I heard from a few people around that every morning there was a spot in Cape Town, where they would gather in case someone looking for workers came along. I went there and when I arrived many others were there. You had to be fast. Each time a car came around you had to jump and ask the driver if he was looking for workers. It’s there that I heard about this field. One of the men who I had become friendly with told me that there was a place that he lived in that I could also live in, seeing that I had nowhere to go,” says Mukwena.

When he arrived at the field and saw how people lived, he says, he was surprised because he had never seen anything like it. “It was unbelievable seeing people living underground in what looked like caves. There were about 15 people there at the time.

“Because I had no choice, I took up the offer and I started burrowing my own place.”

Inside the small hole covered with plastic sheeting, Mukwena has his belongings and blankets. He crawls into the hole to sleep, laying plastic on the ground and covering it with one of the blankets, given to him by District Six residents, then lying down and covering himself with another blanket. The sheeting helps to keep the rain and sand out when it is windy.

Photo: Mukwena’s home is a hole dug in the field.

Getting work is hard, he says, and when he does find work Mukwena buys food which can be cooked easily over a fire using tins as pots.

He and his neighbours use the nearby storm water drain to wash, going underground into the drain to collect water. For cooking they ask for water in the nearby houses and at the shelter for the homeless.

Mukwena says living underground is not ideal, but the worst is when the neighbours use drink and drugs and turn to crime.

“Sometimes you will come back and find that your belongings have been stolen because there is no door or secure place to leave your things. We also have trouble with law enforcement who on a daily basis come here and confiscate our things,” he says.

Asked why he does not go to the shelter, Mukwena says it is not safe and the food is “old and terrible”. Also, he says, he has to pay R10 in order to sleep there.

He still has no idea what happened to his cousin and he says he cannot afford to go home to Venda, where he has left his grandmother and older brother.

Shaba met Mukwena while he was also looking for work. Mukwena showed him the field and he ended up living there too. “I came to Cape Town from Pretoria last year September by train, also hoping to find work because life was very difficult back home. My parents died when I was still young so growing up was tough. Being homeless is not fun and we end up living in these kind of conditions, but there is nothing we can do but survive,” said Shaba.

Hassan Khan, CEO of the Haven Night Shelter Welfare Organisation, said for the first five days in the Haven shelter there was no charge. After that a fee of R10 a night was charged.

“If people cannot afford the R10 then we offer them work around the shelter, for example cleaning, for two hours, and we give them R10 per hour. We are trying to get people away from begging.”

“We are aware of the people living on the field and we do have fieldworkers who go out there and tell them about the work we do, but it’s up to them whether they want to come to the shelter or not.” DM

This feature was first published by www.groundup.org.za

Main photo: Danny “Rasta” Mukwena emerges from a stormwater drain in District Six that he uses to wash himself.