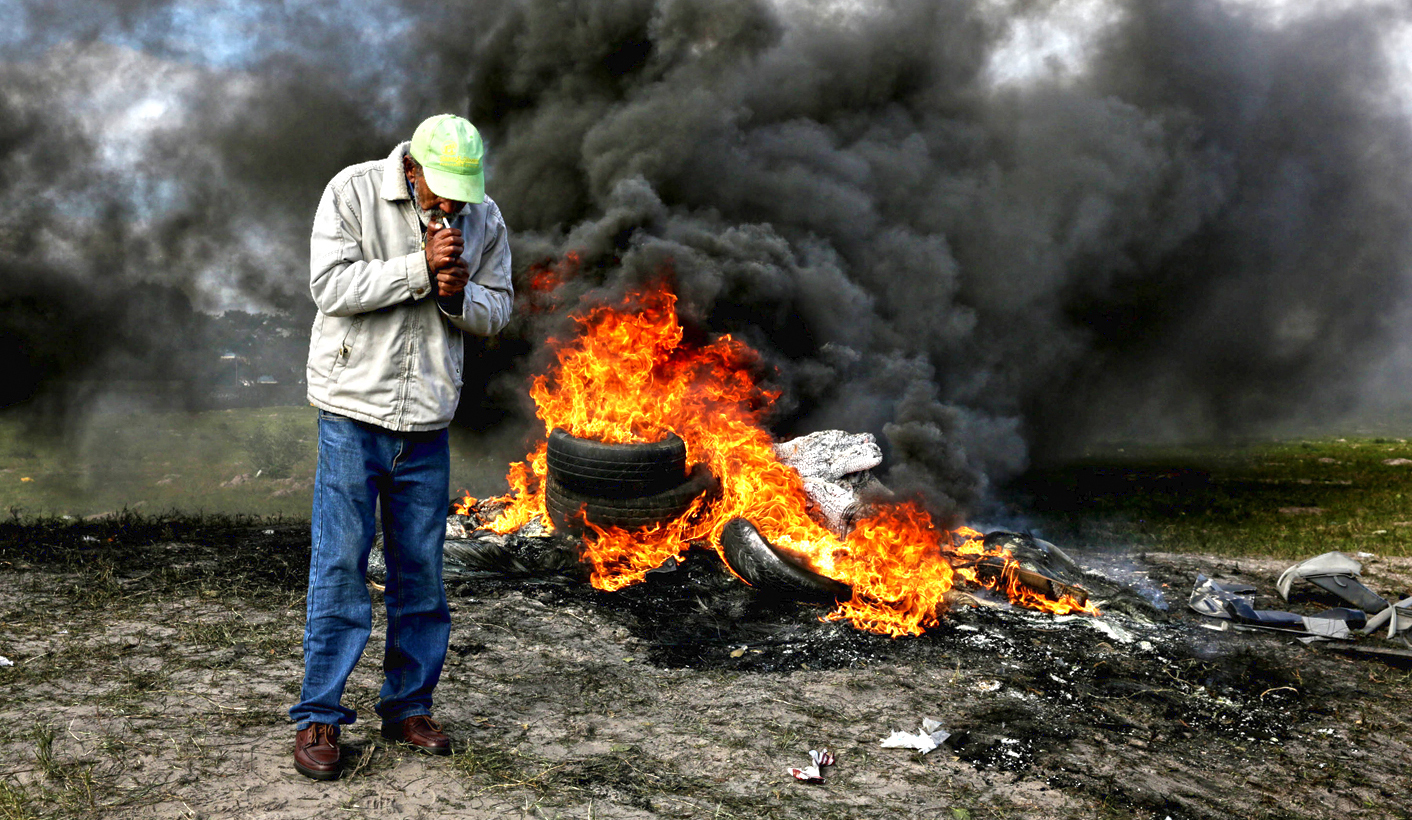 For those who watch these kinds of things, the Civic Protest Barometer, issued last month by the Multi-level Government Initiative at the Community Law Centre of the University of the Western Cape, held few surprises. According to this report, public protests in South Africa have reached an all-time high, and have become increasingly violent. Anyone who reads the newspapers (or has had their morning commute interrupted) would already know this. But finding a context for these protests does deliver some surprises. In a series of five articles, NIKI MOORE takes a closer look at this strange animal called Public Protest.

Reporter’s disclaimer: For this feature I drew on research from a number of sources, such as the MLGI, the Institute for Security Studies, Municipal IQ, material from public, legal, academic and government documents, news reports, and sources I have interviewed for case studies on municipalities. But any conclusions that attempt to contextualise public protests are entirely my own and are, by necessity, often generalisations.

The first thing that strikes you, when you start to dig into this public protest phenomenon, is just how many statistics there are and how much they differ from each other. Police statistics would, one imagines, be the most reliable. And according to the latest police statistics (which are two years old) there were more than 12,300 ‘crowd-related events’ in one year – a terrifying figure, until you realise that these numbers include music concerts, sports matches, parades, rallies, marches – even large parties. These were all gatherings that had obtained permission in terms of the Regulations of Gatherings Act. The police statistics go on to relate that 1,882 of these gatherings became violent, resulting in 3,680 arrests. Terrifying figures again, but they do not differentiate between fans throwing bottles at a football match, or drunken brawls at a party, or protesters indulging in fisticuffs in the street.

Also, police statistics do not take into account that the protests that are most likely to get out of hand and become violent are the illegal gatherings that have not asked for permission in the first place, and therefore fall outside these statistics. They would probably be logged by police under a number of different categories of outrage such as arson, malicious damage to property, public disorder, theft and assault. So there is no way to extract a ‘service delivery protest’ tally out of these numbers, and in any event, not all ‘service delivery protests’ are about service delivery. Perhaps the first problem, therefore, is that it is very difficult to measure something when you cannot properly define what you are measuring.

So one should perhaps look at data-gathering agencies that deal with issues of governance. Municipal IQ came up with a tally of, approximately, a protest every second day last year (around 180 over the course of one year) but explained that they used a rather narrow focus of protests that were specifically aimed against a municipality. They also recorded a multi-day protest as a single event, whereas the police might record many separate incidents within one protest. So, if anything, Municipal IQ might be under-reporting just how many public protests there are.

The Civic Protest Barometer, mentioned above, might be the most accurate way of finding out just how many of our mobs are on the rampage at any given time, for any given reason. This Barometer, as researcher Derek Powell explains, uses Big Data to gather up information from a huge array of sources including published statistics, press reports, opinion pieces, Facebook, Twitter, and everything in between. Numbers are crunched in order to come up with long-term trends.

One might argue that this approach depends on protests actually being reported on, and that protests in remote areas away from media centres would very likely fly under the radar. But Powell believes that even if this was the case, it would be by a very small margin and would in any case self-correct over time.

By all these measurements, however, it is inescapable that public protests and violence are on the rise. The two latest election years, 2009 and 2014, were the worst – 204 in 2009, and 218 in 2014 (compare this with 27 in 1996). The fact that these were election years might have something to do with it, which means we should be bracing ourselves for 2016. Even though the election-year protests were not all before the elections – some of them took place months afterwards – it is not impossible that they were related to political positions or election promises that were not met.

Gauteng has shown the biggest increase in protests, and more than half of all civic unrest has taken place in the country’s five largest Metros. More sinisterly, the Barometer says that five years ago, only 20% of protests became violent, but last year more than 80% of protests turned violent.

However, as many studies point out, all statistics around public protest are only a guide, as there is not even really a proper definition of what constitutes a public protest as opposed to a riot, violent strike, peaceful march, labour unrest, or mob activity.

Powell says that the Barometer offers this data mining in order to spot a trend, in order to spark debate and allow political parties to mobilise around this issue. And there lies the real issue. Who is supposed to be dealing with this thing called Public Protest?

At the moment, protest-management is regarded as a job for the police. An organisation would request permission for a march, the police are deployed to make sure the marchers behave themselves, the memorandum is handed over, and everyone goes home. The memorandum will be ignored, as they always are. As frustration builds in the community after many failed attempts at peaceful demonstrations the protests erupt illegally and spontaneously, the police respond with rubber bullets, stun grenades and tear gas, things burn and people get killed. Even then, this is not usually enough to get the government to take note, so the violence and mayhem needs to continue for an appreciable time until any action is taken.

After years of this escalating pattern, most dissatisfied communities have abandoned the first attempt at peaceful protest as experience has taught them it is a waste of time… they cut out the middle-man, as it were. In cases like these, the police are not the answer; they are dealing with the symptoms of a problem caused by politicians. It is also depressingly true that criminals are indeed quick to take advantage of unrest, and will use the cover of a crowd to loot and vandalise.

Some statistics that look at the demography of protest have noted that there does appear to be an increasing number of young people who take part in violence. This is not really surprising, but it is concerning: young people are among the most uneducated, unskilled, inexperienced and disadvantaged sector of our society. Unemployment among young people is above 50%. They are learning the language of disruption, and they are also learning that it works.

To some, the most interesting statistics of all are those that show that, despite a country apparently filled with looting, burning, rock-throwing youth, none of this has made any real impact on election results so far. A massive increase in public violence should, one would think, translate into massive loss of support for any ruling party, or massive stay-aways from any polling booth. But despite election-year 2014 being the most violent year since 1994, voter turnout remained largely the same and the ruling party’s majority still looks unassailable.

This points to the fact that violent protests, despite their flamboyant nature, really involve only very small groups of our population. Out of millions of South Africans, they seldom comprise more than a few hundred people at a time – even if those few hundred people certainly make their presence felt. Election results analysis has shown that any election impact from violent protests is only confined to a single ward, sometimes to even a single voting district. It makes little difference to overall numbers.

Additionally, in the logic of protest, there is little correlation in the minds of the protesters between the target of a grievance and the overall government. Even if there is no water, sanitation, roads, schools, clinics or electricity, there are still social grants, free houses, free services, and equal rights. So, while protesters might have a fixed and definite grievance against their councillor or local government, they still bear loyalty towards their over-arching political home.

There has been much public concern recently over the ‘spike in public protests’, and the effect that will have on the country. And public concern is not misplaced: violent protests should, really, be unnecessary. They divert police resources away from crime-fighting and crime prevention. Damage to property has more than a monetary cost (even though the monetary cost is huge), there is a psychological cost as well. The concomitant rise in looting and attacks on foreigners is part of this psychological damage to both the perpetrator and the victim. Blocking roads, closing schools, shutting down businesses, restricting access to towns: these all have massive economic price tags. And one cannot even measure the damage to the nation’s psyche.

National government and municipalities alike have no policy to deal with protests: there is no communication strategy to engage with angry or marginalised communities. If there is ever successful engagement, it is ad hoc. Opposition parties also have no platforms around protests or protesting communities. When it comes to community violence, no-one has a clue. But getting good, reliable statistics would be a start.

Even in the first few weeks of this year, newspaper reports are giving a rather worrying indication that 2015 is going to set new records for violence in our society. We are a very angry nation right now. DM

Photo: A Blackheath resident lights a cigarette during a protest in their Cape Town neighbourhood against a plan by the South African National Roads Agency Limited (SANRAL) to move families evicted from shacks in Lwandle to a piece of land in their area on Tuesday, 10 June 2014. Blackheath residents said they had not been consulted about the relocation of the Lwandle evictees and refused to have “squatters” in their area. Picture: Nardus Engelbrecht/SAPA