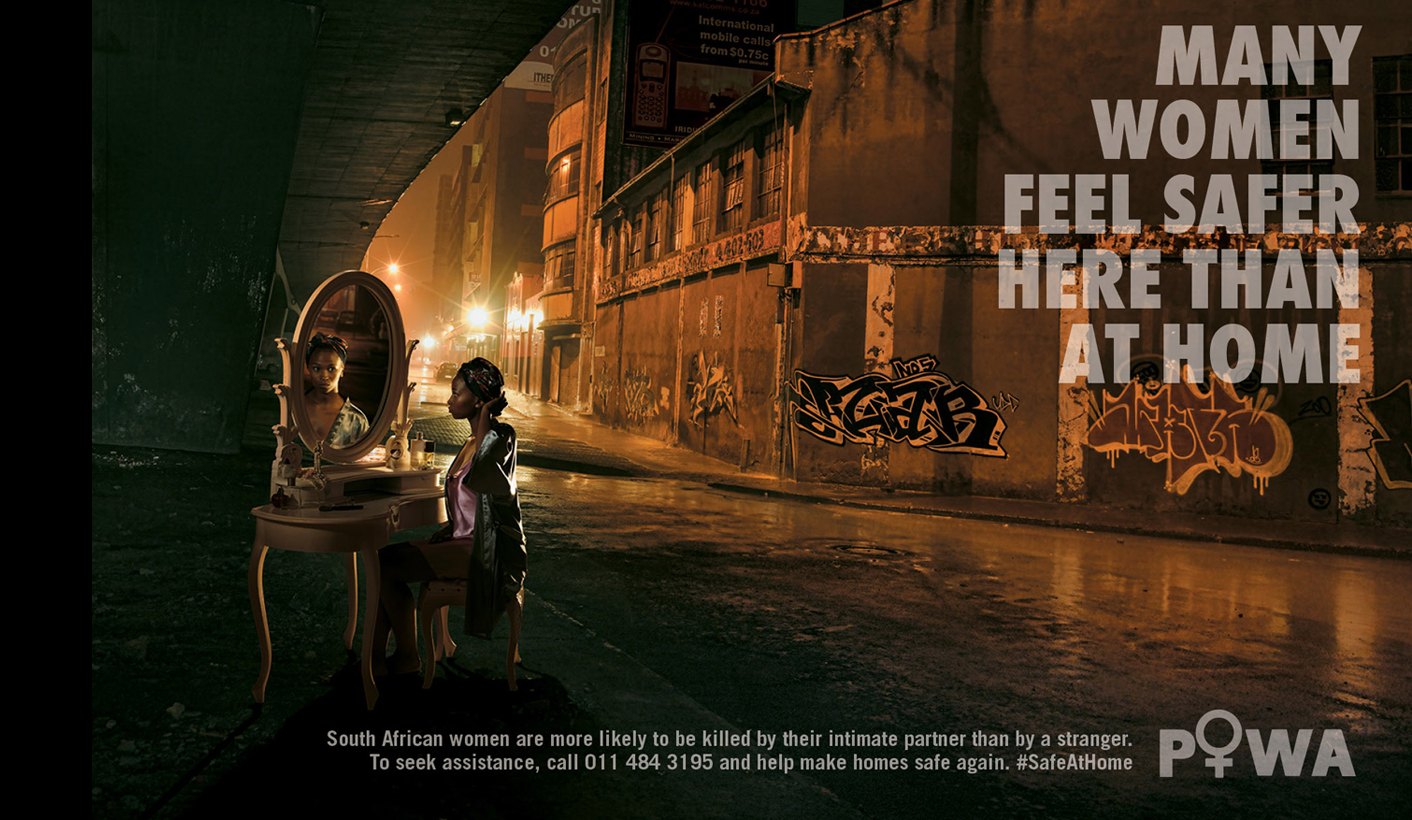 International Women’s Day, on Sunday, saw at least two South African advertising agencies bring out hard-hitting adverts designed to draw attention to violence against women and the services available for women in danger. One took the risky step of using a silly internet meme to talk about gender-based violence – and gained international media attention. By REBECCA DAVIS.

In one photograph, a woman is shown ironing clothes on a board set up in a dark, graffiti-covered subway. In another, a woman is depicted attending to her hair and makeup in front of a dressing table on the corner of a dodgy-looking street at night. Another woman snuggles into a sofa to read a book in her PJs, on the side of a deserted railway station.

In each case, the tag line is the same: “Many women feel safer here than at home.” At the bottom, smaller wording reads: “South African women are more likely to be killed by their intimate partner than by a stranger.” A phone number directs women who are in need of help to the NGO POWA (People Opposing Women Abuse), with the hashtag #SafeAtHome.

The campaign is the brainchild of agency Joe Public, which produced the work pro bono. Creative director Roanna Williams told the Daily Maverick on Sunday that it was created by a mostly female team who carried out extensive research into South Africa’s domestic violence problem, and decided to highlight the insight that most instances of violence against South African women occur within the home.

“It is a horrifying reality that many abused women in South Africa may feel safer somewhere other than in their home – even in a place we may perceive as dangerous,” Williams said.

“We would like to raise awareness of the alarming women abuse statistics in SA. But also to communicate to people that there is help out there – like POWA, an organisation that aims to create a safer society that does not tolerate violence against women, and which offers assistance through its support, counselling, legal advice and shelters.”

The campaign consists primarily of print adverts, but the agency hopes to reach a wider audience through the use of social media platforms and the #SafeAtHome hashtag.

Joe Public’s campaign for POWA was not the only provocative South African ad released in tandem with International Women’s Day.

Joburg-based agency Ireland/Davenport has also created a campaign which has garnered international media attention, due to its provocative use of a silly internet meme.

Over the last two weeks, the internet was briefly torn apart by conflict over one of the monumentally insignificant debates that tend to rage online. In this instance, the subject of contention was a striped dress, a picture of which was originally casually emailed between friends and then spread like wildfire on the internet.

Was the dress striped black and blue, or was it striped white and gold? Due to a curious optical illusion, both interpretations were possible. More than two million people answered a BuzzFeed quiz on the question within days. Typically, the debate produced multiple spin-off memes. Normally serious news outlets devoted space to the coverage of what became known as #TheDress.

Harmless silliness, or yet another indication of the skewed priorities of the media and online public? Agency Ireland/Davenport staked their new campaign on the latter position.

Their advert shows a woman lying on her side wearing a similar striped dress to the one that caused all the controversy. Her face and legs are bloodied and bruised.

“Why is it so hard to see black and blue?” asks the accompanying text. “The only illusion is if you think it was her choice. One in 6 women are victims of abuse. Stop abuse against women.” The advert is designed to draw attention to the two homes for abused women and children which the Salvation Army runs in Cape Town and Johannesburg.

It originally appeared in the Cape Times on Friday morning, but it was when South Africa’s Salvation Army Twitter account posted a picture of the advert that it became the focus of international attention.

Representatives from Ireland/Davenport were unavailable for comment to the Daily Maverick on Sunday, but the agency’s creative team told BuzzFeed News: “For the past few days the internet has been swarming with comments about ‘the dress’ – overall people have been commenting how they hate the fact that an insignificant thing like this could take priority on the internet over more pressing topics such as abuse.”

The ad was created and published within 24 hours. Linking an issue like gender-based violence to something as trivial as #TheDress is always going to be a high-risk move, given the potential for trivialising the issue by association.

Influential industry publication AdWeek called the campaign “powerful” and “brilliant”. Others were less sure. An op-ed on website ThinkProgress concluded: “Perhaps connecting The Dress to issues of gender-based violence doesn’t elevate the conversation to a more significant or pressing place. It brings a complex issue down to a level of soundbytes and days-old memes.”

The client, however, was happy. Administrator of one of the shelters, Cape Town’s Carehaven centre, Frankie Burgoyne, was quoted as saying: “To be very honest I think the more controversial the advert, the better if it gets the message across!”

Many will say that campaigns like these are disingenuous, given the overall harm to women perpetrated by the advertising industry – which has traditionally been a major offender in objectifying women and entrenching insulting gender stereotypes. The model used in the Salvation Army ad, incidentally, is blonde and beautiful.

Joe Public’s Williams, however, insists that things are changing.

“There is a trend towards authenticity and what’s real and meaningful,” she says. “People are looking to be communicated to in a way that connects emotionally with them. As an organisation or brand, in order to connect with your consumer today, you need a deeper purpose. If you don’t do this, your communication will be wallpaper.” DM

We have no choice but to embrace soulless arenas