Budget 2015: Nhlanhla Nene and the theory of everything 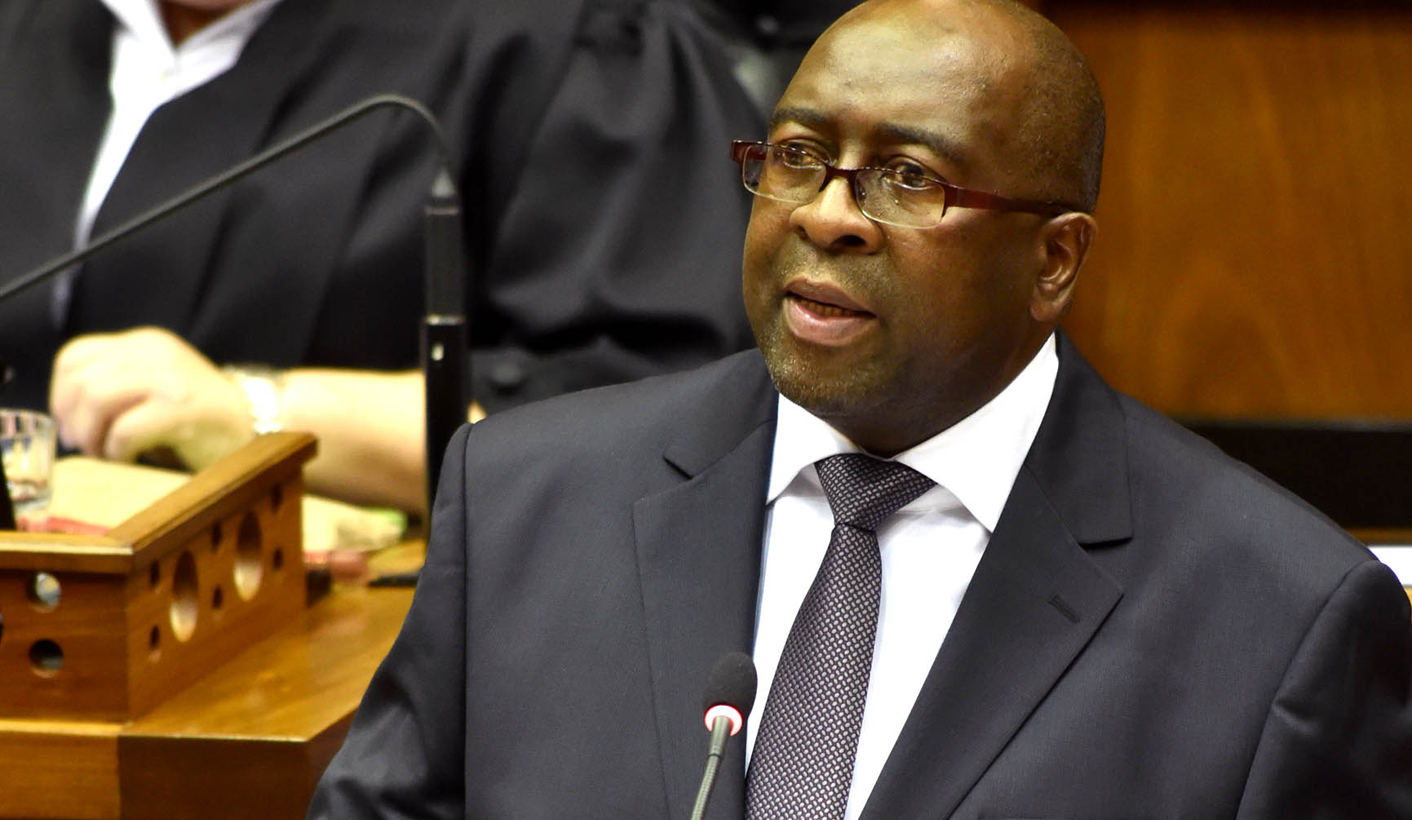 It could not have been easy having to proclaim the end of the good times to South Africans. It was Finance Minister Nhlanhla Nene’s first spin of the Budget wheel, a task performed adeptly by his predecessors as ANC finance ministers, Trevor Manuel and Pravin Gordhan. Unlike Manuel and Gordhan, Nene had to be the bad guy, announcing, among other things, the first tax hike since 1995 and a massive increase in fuel levies. It is clear that fiscal discipline and more squeezing of the taxpayer will have to define his term in office. Nene is not a political heavyweight, and the success of his Budget is entirely dependent on his colleagues and the government system taking him seriously. By RANJENI MUNUSAMY.

Nhlanhla Nene seemed to have a strange concern on Wednesday, the day he presented his first Budget as South Africa’s Finance Minister. At a media briefing ahead of his Budget speech and then at a reception afterwards, he mentioned that some journalists in the lock-up room, where the Budget documents are studied under embargo, had told Treasury officials that the Budget was “boring”.

It was by no means boring; if anything, it was the most impactful in several years. Perhaps the decision not to adjust VAT, not to fiddle with corporate tax, or not to announce severe/dramatic sounding austerity measures made the Budget seem less dramatic than it could have been. But “boring” it was not.

It is understandable, though, why Nene would worry about perceptions of the Budget. It is not a “good news” Budget or a “tightening of belts” Budget. Nene didn’t deliver sexy lines about cutting up government credit cards or restricting the purchase of luxury ministerial vehicles. Those were narratives of previous years.

Nene is no Robin Hood, taking from the rich – via a wealth tax and corporate taxes – to give to the poor. He couldn’t dress up the bad news on higher taxation by announcing major investment spending that would yield jobs sometime in the future. He couldn’t tell poor performing state-owned companies to buck up and go and find their own money and stop being a drain on the fiscus. He couldn’t slash the Cabinet and a bloated public service to demonstrate moderation or the end of the reign for the fat cats. Neither could he scrap the much-hated e-tolls to become the saviour of the people of Gauteng.

All of these, which would have shot Nene up on populist ranking, require significant political clout and perhaps some superpowers. But Nene could only play with the cards he was dealt with, and from these, deliver his message straight – which translates into him and the government getting hammered from many quarters.

A revised budget deficit of 3.9%, the deterioration of the economic outlook, instability of the energy supply, R5.9 billion of under-spending by government departments and government debt at 42.5% of the gross domestic product means that means that big political ambitions have to be curtailed by economic realities.

Nene did announce a R25 billion reduction in the expenditure ceiling over the next two years but this will mean little to people who have to cough up more for taxes and fuel levies. Although Nene tried to sell the increase of 1% in personal income tax as “not too much pain”, the psychological impact is huge, especially with negative perceptions of government wastage and corruption. Nobody wants to pay more to fund a state weighed down by scandal and poor performance.

Therefore, when Democratic Alliance parliamentary leader Mmusi Maimane concludes that we have an “incapable state riding on the back of an overburdened taxpayer”, it rings true for many people who feel let down by incompetence and cyclic decline at all levels of government.

The sharp increase in levies for the general fuel tax and Road Accident Fund, amounting to 80.5 cents from 1 April, was an unexpected hit for motorists who had been enjoying a temporary decline in the fuel price.

All of these would perhaps be palatable if relief was foreseeable in the future. But Nene was not able to give such assurances. If anything, he warned that the economic outlook was uncertain and that both weaker growth and rising interest rates are possible over the period ahead.

There are also other dangers looming. Nene noted that public service salary negotiations are pending. The public sector wage bill is already extravagant, amounting to about 40% on non-interest spending. While government departments have been urged to control personnel budgets, an out of budget wage increase, as was the case during the last round of negotiations in 2012, could undermine plans to reduce personnel expenditure.

In 2012, the Treasury was overridden by pressure from public sector unions on the state. As that was a crucial year politically, with the ANC national elective conference in Mangaung, the unions won the day and the former Finance Minister Pravin Gordhan and the Treasury had to deal with the consequences.

Nene told the media that he hoped there would be “moderation” during the public sector negotiations and that the increase in the wage bill should not impact on the deficit. But if political considerations again take precedence, Nene will, like Gordhan, have to swallow the bitter pill.

Political buy-in and support is in fact what would make the Budget framework stand or fail. Gordhan and Trevor Manuel before him know all too well how flashy announcements about curbing costs and trimming the fat can be undermined by their Cabinet colleagues living large and believing cost containment did not apply to them.

Manuel, in his next incarnation as National Planning Minister, also had to watch the National Development Plan being used as a catch phrase in political speeches with no real translation in terms of implementation.

In his reaction to the speech, Economic Freedom Fighters leader Julius Malema pointed out the paradox between President Jacob Zuma’s State of the Nation Address (SONA) two weeks ago and Nene’s Budget. The SONA had a heavy focus on the Freedom Charter, he said, while the Budget made no mention of it.

But this is not unique to the 2015 context. Last year, both the ANC and the president talked up “radical economic transformation”, which was patently absent in the 2014 Budget. It is a symptom of a chronic mismatch between political ambitions and rhetoric on one hand and economic realities on the other.

For this reason too, there are no major announcements on the National Health Insurance scheme or investment spending. Cosatu has condemned Nene’s “silence” on unemployment, poverty and inequality. “Surely with all of its resources, government should focus on breaking these three ticking time bombs. To continue to ignore them and proceed with business as usual is to risk going down the route of complacency until society reaches its breaking point,” Cosatu said.

“It appears that Treasury believes mere tinkering with the budget and the economy is sufficient to eradicate an unemployment rate of 34.6%, 53% of South Africans living in poverty and being the most unequal society in the world.”

Over the next few years, and for as long as the economic growth remains below par, more pain, and possibly less gain, is in store for taxpayers and consumers. Nene did not discount the possibility of changes to VAT, but said further consultation on this was needed. There could also be further changes to the tax regime stemming from the recommendations of the Davis Tax Committee. And for as long as state-owned companies continue to dysfunction and the public service remains bloated and under-performing, the taxpayer will pay the price.

Nhlanhla Nene probably wanted his Budget to be hailed for delivering more school books and medicine, more grants for the poor, more qualified teachers and better roads, a central e-tender portal and a move towards a more efficient, greener economy.

But the reality is that his very first Budget will be remembered for a tax hike and greater fuel costs that will probably have further negative repercussions for food, commodities and services.

It’s tough being a nice guy assigned to do a lousy job. But someone has to do it. DM