Exclusive: Is this the first South African fighting for the ISIS? 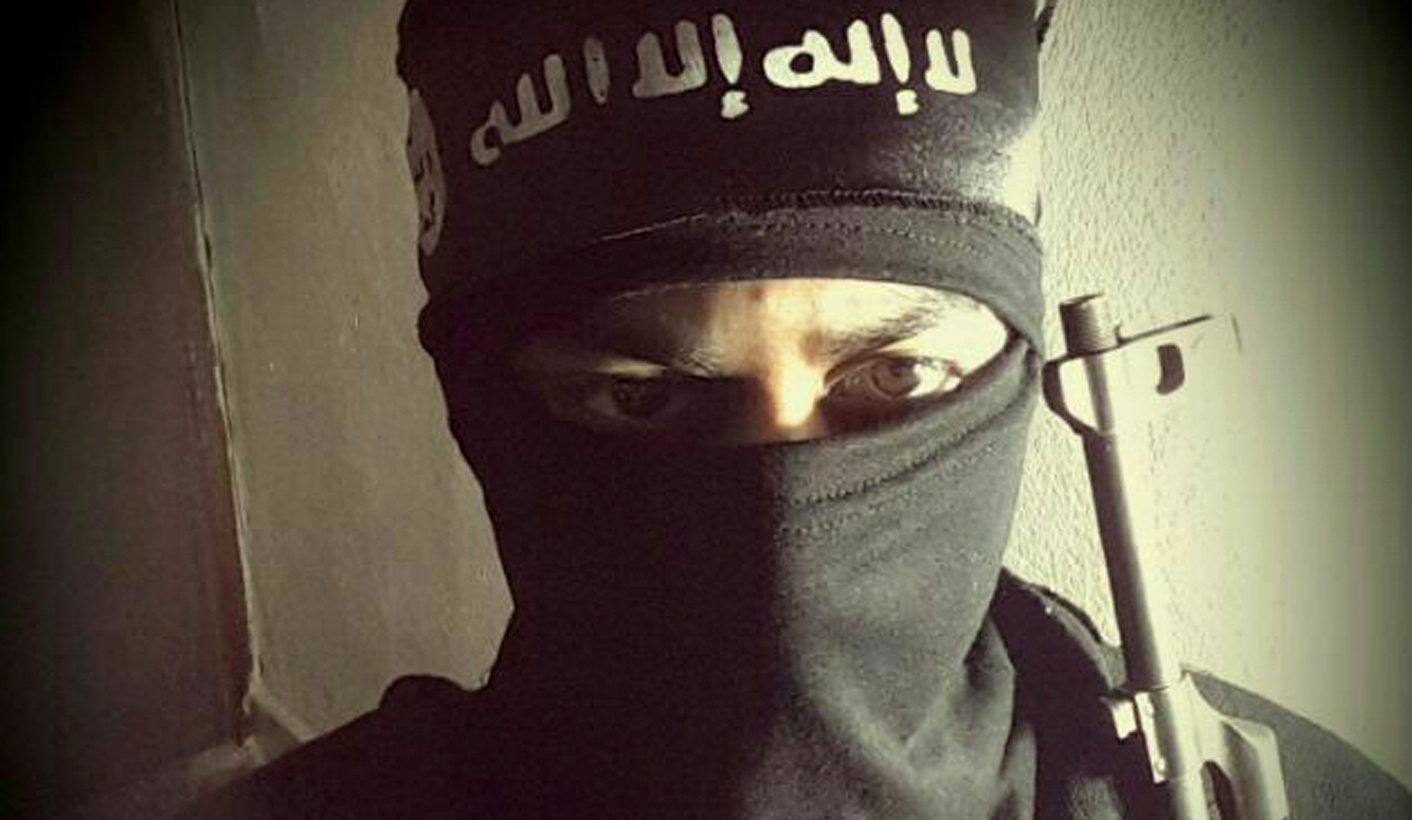 He calls himself Abu Hurayra the African, and he wants to help – if, that is, you’re a South African who dreams of fighting for the Islamic State. Meet the man thought to be the first South African jihadi in Syria; this is an insight into his world. By SIMON ALLISON.

“The life in the Islamic State is an amazing life.” These are the words of Abu Hurayra al-Afriki, the South African who claims to have travelled to Syria to fight for the Islamic State, in an exclusive interview with the Daily Maverick conducted via a social messaging platform.

The name’s a pseudonym, and it’s the one he uses for his Tumblr and Twitter accounts – set up in January this year expressly to guide other would-be jihadis from South Africa who wish to join him. (The Twitter account was suspended on Friday.) On his now-deleted Facebook account, he goes by Muhammed Atta – likely another pseudonym.

Both names have historical resonance. Mohamed Atta was one of the ringleaders of the 9/11 attacks, while Abu Hurayra was a companion of the prophet Muhammed, and the most prolific narrator of Sunni hadith (prophetic traditions). Literally the name means ‘Father of Kittens’, while Al-Afriki means ‘the African’ (sometimes he refers to himself as al-Hindi, ‘the Indian’, suggesting that he is a South African of Indian origin).

The African Father of Kittens – an unlikely moniker for a jihadi, perhaps, but it was not so long ago that the whole Islamic State phenomenon seemed just as unlikely.

In just over a year, the Islamic State has gone from just one of many radical militant groups operating in Iraq and Syria to controlling vast swathes of territory there. Along the way, it has garnered a reputation for extreme brutality coupled with strict application of their interpretation of Islamic law. Most recently, it has exported its doctrine into Libya, and is said to be forging ties with other militant groups across Africa.

Guidebook to the Islamic State

On his Tumblr account, Abu Hurayra promises to help South African Muslims with practical information about how to make the journey into Islamic State-controlled Syria, including details on how to book flight tickets, hotels and transport in Turkey (the usual transit point into Syria).

On Twitter, prior to suspension, he was more forthcoming about what life is really like in the Islamic State, painting a surprisingly prosaic picture. He’s got tips on house-hunting (houses aren’t “top class”, but the Islamic State will cover rent, unless you want a villa, in which case you pay yourself), dental care (keep your receipt) and internet access (about R30 for 175MB, which is cheaper than Vodacom). The hospitals are free for mujahidin (jihadis), as is water and electricity, petrol money and a rifle. They are also given a monthly allowance for food and sundries.

Photo: Abu Hurayra poses with an AK-47 in this photograph. His bandana reads l? il?ha ill?-ll?hu (There is no God but God), the first line of the shahada, an Islamic creed.

But this is a war zone, after all, and Abu Hurayra has gone to fight, so there’s a darker side to his tweets, clearly cribbed from the military training which all Islamic State recruits undergo. “Handguns are the best to get for the sisters, so they do not appear armed and they can fire at the enemy from within their cloaks,” he writes in one. Another reads: “Rifles and shot guns are fine too, but they’re easily disarmed, especially if the attackers are two and the victim is alone.” At one point, he posts a photo of a hand – presumably his own – holding a grenade: a gift from someone.

Although Abu Hurayra would not reveal his real name, the Terrorism Research and Analysis Consortium (TRAC) was able to trace the location of the latest tweets to Syria, and confirm that elements of his social media profile were established in South Africa. This lends credence to his story. He also sent Daily Maverick a photograph of a South African passport with the first page torn up (“That’s my SA passport,” he said. “I tore up the first page because of its disbelief saying ‘in the name of the president’. I’m going to burn it out soon, by the will of Allah”); and several masked pictures of himself with his new AK-47.

Photo: This photograph shows a South African passport, allegedly belonging to Abu Hurayra, with the first page torn to shreds. He claims it is to distance himself from his former nationality.

At the Daily Maverick’s request, he sent a picture of his entry stamp into Turkey, with the date blacked out:

While we cannot confirm his identity and location beyond all doubt, the information we have, coupled with the detailed information on conditions in Syria that he has shared with us, suggests that on a balance of probability his story holds up. (However, it is important to note that in this age of Photoshop and VPNs, the possibility of a hoax cannot be dismissed entirely.)

‘The Islamic State is short of nothing’

Abu Hurayra says that he is 18 years of age and from Johannesburg, and travelled to Syria from South Africa in January this year, motivated by religious conviction.

“I joined the Islamic State because their aim is to establish the word of Allah (There is no God, but Allah) as the highest, and the word of Kufr (disbelief) as lowest, and this is what Allah tells us in the Qur’an to do. So it is a compulsory duty upon all the Muslims around the world, to join the Jihad, although many of them are misguided and Allah did not choose them…”

So far, he says that life in the Islamic State has lived up to his expectations, although he did mention on social media that the first three months are always the hardest for new arrivals. “The Islamic State is short of nothing, the food is excellent, the living costs are extremely low; we get everything here.

“The houses we stay in aren’t bad at all…I would not give this life up for anything, be it the five-star Hilton hotels, or the palace-like homes that we came from, or the luxury cars…nothing is worth as much as this life.”

It’s a rosy picture, but other accounts of life inside the Islamic State suggest that his is, at best, an incomplete account; or, more likely, blatant propaganda.

“One can only be appalled at [the Islamic State’s] mass execution of captured combatants and disfavoured civilians. This Sunni armed group has singled out Yazidis, Turkmen, Kurds, Shia, and even other Sunnis who contest its extreme interpretation of Islamic law. Its militants have enslaved, forcibly married, and raped Yazidi women and girls, and beheaded journalists and aid workers in gruesome videotaped spectacles. Rarely has an armed force engendered such widespread revulsion and opposition,” said Human Rights Watch in its 2015 World Report.

In the area controlled by the Islamic State – estimated to be the size of Britain – the group has shut down schools, placed huge restrictions on women’s movement and dress, and punished any kind of opposition or disobedience with a variety of punishments, including fines, lashing, and crucifixion. Opponents include anyone who doesn’t explicitly sign up to the Islamic State’s agenda: Christians, homosexuals, Shiities, and even Sunni Muslims with a more mainstream interpretation of Islam.

Even for foreign fighters such as Abu Hurayra, who would be among the group’s elite, things can get tough. “Some of them just get bored when they arrive here from London or New York,” wrote Abu Ibrahim al-Raqqawi, an anti-Islamic State activist based in the Islamic State capital Raqqa, in the Observer. “Raqqa was never an exciting city and now there is nothing to do at all, so they lose enthusiasm. Others just came to live a good life under the caliphate, but they don’t really want to fight, so when Isis needs men and tries to take them to the frontline they are unhappy. Isis can’t afford news to get out of people defecting, so anyone attempting to sneak out is executed in secret.”

Not that Abu Hurayra has any intention of leaving – not for now, anyway. Instead, for his family remaining in South Africa, and for other South African Muslims, he has a chilling message:

“I say to my family that I have pledged to fight until death, to Khalifah Shaykh Abu Bakr, Al Baghdadi, and I shall never return to the land which I was born in, other than with explosives and my rifle in my hands, and I will never live in disbelief, I will live under none, but the shade of Islam.

“To the South Africans, to the [Muslims] in South Africa, I say to you that you should hurry and come to the Khilafah (Caliphate) before it’s too late, and join the Jihad before death overcomes you, for there is nothing worthy in the land which you’re residing in, the land of South Africa will soon be conquered too, by the Mujahidin [Jihadis] of the Islamic State, by the will of Allah.”

The Islamic State’s battlefield successes and its potent propaganda machine have attracted thousands of foreign fighters to their cause, but Abu Hurayra is thought to be the first South African in their ranks. He claims there is one other compatriot there, too.

Photo: According to Abu Hurayra’s Twitter feed, this is a picture of a second South African fighter in the Islamic State. “Abu Bara from South Africa 🙂 What a onderful Brother :)” (sic) (screen grab from Twitter feed).

“South Africa must not be naïve,” said Jasmine Opperman, Africa director for TRAC. “The Islamic State’s strategy is simple as set out in its propaganda magazine Dabiq. It’s a call to action by a worldwide audience in support of the Islamic State, not only by means of those travelling to fight in Syria and Iraq, but for those who cannot travel for whatever reason to take actions where they are present – and this reality is also present in South Africa.”

Brian Dube, spokesperson for the department of state security, said that the department was not aware of any specific cases of South Africans fighting for the Islamic State, but said that it received “a number of reports of people claiming to be doing all kinds of work outside the borders of our country”. He emphasised that any kind of mercenary activity is illegal, and “if they do so the law will take its course”. The Regulation of Foreign Military Assistance Act explicitly prohibits South African citizens from taking up arms overseas, and Dube said that the department is doing everything in its power to prevent citizens from doing so.

Abu Hurayra, however, appears to have slipped through the cracks and made it to the battlefields in Syria. If the Islamic State’s propaganda is anything near as effective in South Africa as it has been in Europe and North America, he won’t be the last. DM

Main photo: Abu Hurayra poses with an AK-47 in this photograph. His bandana reads l? il?ha ill?-ll?hu (There is no God but God), the first line of the shahada, an Islamic creed.