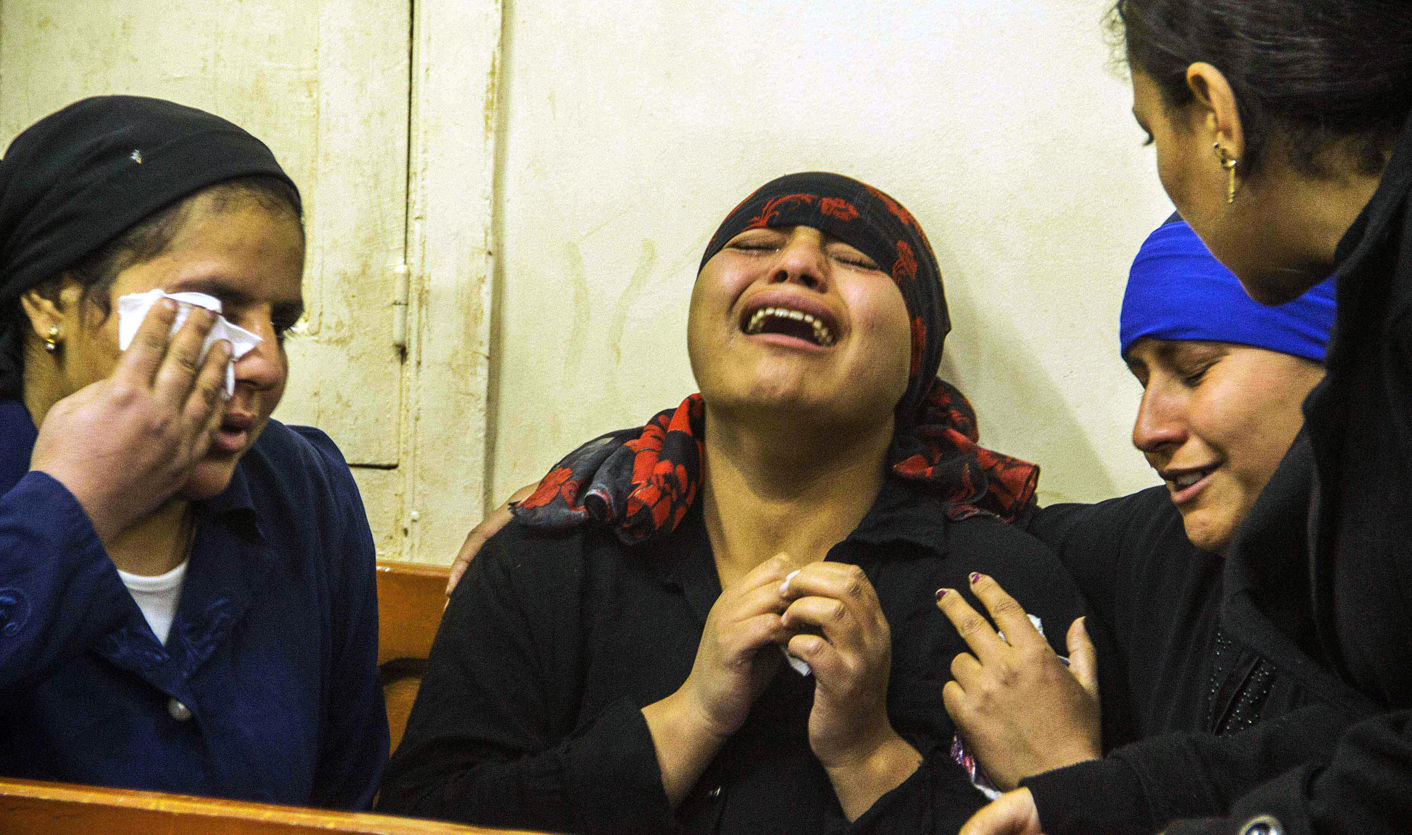 Just in case there was any lingering doubt about its intentions, the Islamic State underlined their arrival in Africa in typically brutal fashion. By beheading 21 Egyptian Christians, and precipitating an aerial assault in Libya, the radical Islamist group showed that the tactics which have worked so well in Iraq and Syria are just as effective elsewhere. Be afraid. By SIMON ALLISON.

The video is straight from the Islamic State playbook. Black-clad, balaclava-ed fighters, check; terrified prisoners in orange jump suits, check; gory violence and slick propaganda slogans, check. By the end of the five-minute video, all 21 prisoners are dead – beheaded, of course, a method of execution that has become an Islamic State trademark.

“All crusaders: safety for you will be only wishes, especially if you are fighting us all together. Therefore we will fight you all together,” said one of the militants, the rhetoric typically bombastic. “The sea you have hidden Sheikh Osama bin Laden’s body in, we swear to Allah we will mix it with your blood

There was one departure from the norm, however. This video wasn’t shot in Iraq or Syria, or anywhere near the Islamic State’s headquarters. It came from nearly 3,000 kilometres away, on another continent entirely, somewhere near the Libyan capital of Tripoli.

It’s a natural move. Libya, with its non-existent government, vast caches of weapons, and ready supply of unemployed but battle-scarred young men, is prime territory for Islamic State expansion, and the group already claims to occupy three Libyan provinces and has co-opted several militias involved in the anarchic struggle for power here (most notably Ansar al-Sharia, which controls much of the eastern city of Benghazi, once the cradle of Libya’s pro-democracy revolution). It is unclear which militia was behind the mass beheadings, or whether it indicates the creation of a more formal Islamic State structure.

Not that it matters. The IS is not your typical radical Islamist militant group. It has redesigned the radical template, and repurposed it for the digital age: these are YouTube-friendly terrorists, and they’re going viral.

Their tactics – extreme brutality, military prowess and the provision of social services – are effective and easily replicable in countries with weak governance. This makes the IS extremely flexible: using the tools of the modern world – the global communications network, the global finance network – it can initiate and support operations remotely, all the time expanding its global footprint without compromising its core in the Middle East.

Think of it as a franchising operation, where local groups adopt IS aims and colours (black, black and more black). It’s a win for both sides: the IS gets to look even bigger and scarier than before, while the local group enjoys the rush of publicity and prestige that comes from being associated with radical Islamist royalty.

The loser is, of course, the country in question – this time, Libya. The consequences of the latest video have been dramatic. All the dead were reportedly Coptic Christians, a clear attempt to stoke sectarian tensions, and all but one of them were from Egypt. Egyptian President Abdel-Fatteh al-Sisi swore vengeance on national TV, and he delivered instantly, despatching Egyptian fighter jets to bomb suspected IS-affiliated camps, training sites and weapons storage areas. Libyan officials estimate that up to 50 militants were killed, while civilian casualties are likely too. Sisi also told Egyptians in Libya to leave immediately, and promised to help with the evacuation.

None of this is likely to deter the IS, who have showed themselves to be remarkably resilient when it comes to withstanding sustained aerial bombardments in Iraq and Syria. If anything, Egypt’s sudden intervention may work in favour of the Libyan affiliate – foreign intervention can be a potent recruiting tool.

More worrying still is the impact this may have elsewhere in Africa, which is home to several countries that IS might consider fertile ground: Libya, of course, but also Egypt itself, Mali, Nigeria, and Somalia. In fact, a very loose affiliation already exists between Boko Haram and IS, with Boko Haram clearly adopting several IS tactics in its rebellion against the Nigerian state. And why wouldn’t it? Why wouldn’t Africa’s plethora of radical Islamist groups learn from and partner with the most successful group of them all?

The video of the mass beheadings in Libya is the clearest evidence yet that IS has spread its wings into Africa. While it’s anyone’s guess where on the continent the next such video will come from, it seems certain that there will be another one. DM

Photo: Unidentified relatives react during funeral of Coptic Christians, kidnapped and killed by extremists linked to the Islamic State group in Libya, at a church in al-Aour village, Minya governorate, Egypt, 16 February 2015. An Islamic State video released on 15 February claimed to show the extremist group beheading 21 Egyptian Christians abducted in Libya more than a month ago. The Egyptian army responded on 16 February by an airstrike against the militants targeting bases and weapons storage facilities in Libya. EPA/ALAA ELKAMHAWI/ALMASRY ALYOUM