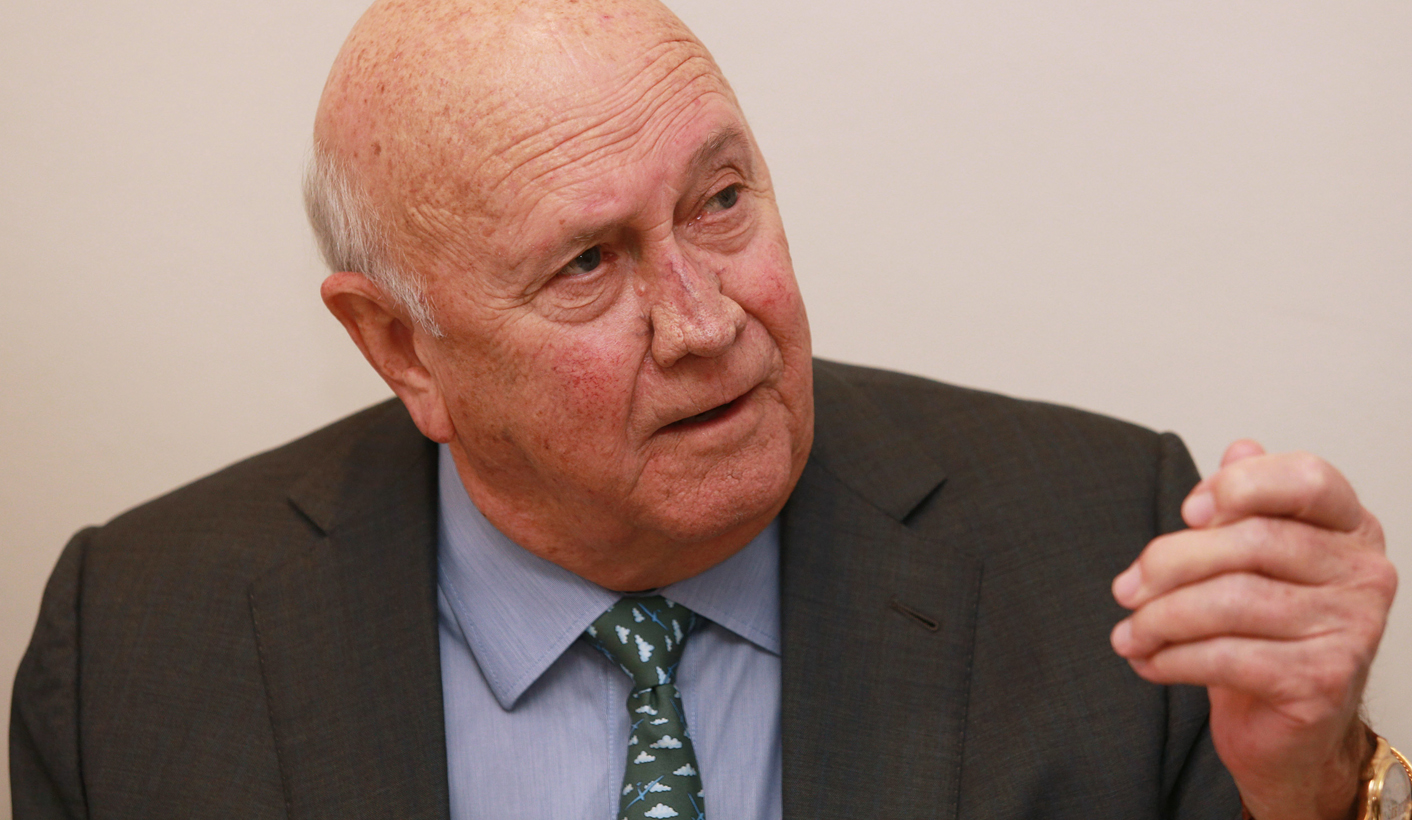 Twenty-five years after the speech that unbanned political organisations, FW de Klerk wants you to know one thing: he did not dismantle Apartheid because his back was against the wall. It was an action taken out of conscience, not pragmatism. Whether you buy this or not, two people who appear to accept it (in public, at least) are Inkatha Freedom Party leader Mangosuthu Buthelezi and former president Kgalema Motlanthe, as Tuesday’s intriguing FW De Klerk Foundation Conference revealed. By REBECCA DAVIS.

The argument over what, exactly, prompted FW de Klerk to start dismantling the apparatus of Apartheid in the early ’90s is one that looks unlikely to ever be settled definitively. This week marks 25 years since the 2 February 1990 speech given by De Klerk that changed the course of South African history, and an event held in Cape Town on Tuesday brooked little debate on De Klerk’s motives.

Speakers at the FW de Klerk Foundation conference repeatedly mentioned the need for a frank national conversation, but there was very little dissent among them on that particular issue.

De Klerk himself, in an address during in which he occasionally seemed quite emotional, conceded that his 1990 speech was “not the result of some Damascus Road conversion”; that there was an acknowledgement in the leadership of the time that the reforms embarked on in the 1980s by his predecessor PW Botha – including the establishment of the Tricameral parliament – were inadequate.

But he explicitly sought to refute the notion that his actions were the result of pragmatism. “We admitted to ourselves that the old system was morally indefensible,” De Klerk said. “My speech was motivated by conscience.”

Later, he said, “In 1990, if I had seen what South Africa would look like 25 years later I would still have embraced it… I would still have made that speech. Not because I had to, but because my colleagues and I were convinced it was the right thing to do.”

While former Deputy President (and briefly former president) Kgalema Motlanthe took care to begin his own address with a reminder that Apartheid was “a stain against humanity at large”, he paid muted tribute to De Klerk. “Historical consensus will always be that FW de Klerk measured up to historical exigency,” he said.

During a question and answer session later in the day, however, Motlanthe expanded that to say he endorsed “Oom Kathy” [Ahmed Kathrada]’s support for the renaming of Table Bay Boulevard after FW de Klerk, describing it as “the right thing to do”.

When he was asked if he would repudiate Cosatu Western Cape leader Tony Ehrenreich’s vocal opposition to the renaming, Motlanthe – ever the diplomat – initially said Ehrenreich should be free to express his opinion, but he added that when next he saw Ehrenreich, he would tell him his disagreement with Ehrenreich’s view.

Inkatha Freedom Party (IFP) leader Mangosuthu Buthelezi, meanwhile, was downright effusive about the role played by De Klerk in the transition to democracy, thanking him and expressing admiration. Buthelezi condemned the opposition to the road naming as “shameful” after “what Mr de Klerk did for us”.

Never one to resist the opportunity to play up his own heroic role in South Africa’s past, Buthelezi also essentially suggested De Klerk had released Mandela based on pressure from Buthelezi and other Inkatha leaders.

The glowing testimonials for De Klerk continued. Former British ambassador to South Africa Lord Renwick, who was in his post at the time of the transition to democracy, dismissed the idea that De Klerk had his “back to the wall” as “nonsense”. Renwick also objected to the common description of De Klerk as “the last Apartheid president”, saying that, “In reality, he was the president who abolished Apartheid”.

Last up to sing a similar tune was billionaire businessman Johann Rupert, who professed himself bemused that “my old friends like Max du Preez” would now question De Klerk’s motives. De Klerk acted out of “morality”, he said definitively, and he ended his speech with a thank-you to De Klerk for allowing Afrikaners to look people in the eye again.

Having Motlanthe side by side on a panel with De Klerk was an intriguing prospect. Motlanthe holds no official post in the African National Congress (ANC) leadership currently, although he occasionally carries out ceremonial tasks – in January, for instance, it was announced he would be travelling to Botswana as a “special envoy” to represent President Jacob Zuma at the funeral of the country’s former vice president.

Being freed from the strictures of leadership shows little sign of loosening Motlanthe’s lips, however. In a loftily worded speech he did not drastically deviate from the official ANC line on any particular issue, saying that South Africa was “decisively advancing towards a non-racist, non-sexist, just future”.

Simultaneously he did, however, highlight the problem of racial polarisation. “If there is one social space which provides an index to race relations it is social media,” Motlanthe said. He added that what disturbed him most about “cyberspace racism” was how many of the most racist views appeared to be expressed by people who were young and had not lived through Apartheid.

When examining the causes of the current racial polarisation, Motlanthe suggested, “We may need to take a closer look at the philosophical assumptions of our education systems”.

While noting that the effects of Apartheid could not be dismissed, he cautioned that, “History mustn’t make us think that blaming the past is demonising whites… To blame Apartheid does not mean demonising white people as a people”.

Motlanthe called for an “all-inclusive nationalism”, warning that, “taking comfort in ethno-nationalism is a lost cause”.

Perhaps it was telling that he did not use his platform to refute some of the harshly worded criticism against ANC governance delivered by De Klerk moments earlier.

De Klerk accused the ANC of “airbrushing history” when it came to the transition to democracy; condemned the “dismal failure” of the education system; and branded Cosatu one of the “most employer-unfriendly trade unions in the world”.

When it came to corruption, De Klerk said that the release of Schabir Shaik on medical parole showed that the President’s friends were above the law, and that it was unacceptable that the government continued to defend spending on the President’s “retirement home”. He also expressed alarm at the seeming neutering of critics of corruption, from the Hawks to the public protector.

In some ways De Klerk comes across as a man still trapped in Cold War-era politics, railing against the rooi gevaar. Several times he warned ominously of the “growing influence” of the South African Communist Party. He also suggested that a “new bitter and confrontational tone in the national discourse” was attributable to “constant agit-prop” from politicians stoking racial animosity.

Motlanthe did not seem to feel sufficiently stirred to directly counter many of these accusations.

From Renwick there were some interesting anecdotes, including that former President Thabo Mbeki told Renwick he believed that he could persuade Zimbabwean President Robert Mugabe to resign. (Renwick responded that in that case Mbeki would earn himself his own Nobel Peace Prize.)

Renwick also said that US presidential contender Hillary Clinton had found that South Africa could be a “frustrating partner” in international discussions, particularly when it came to the question of humanitarian interventions.

“South Africa is currently in a situation where your friends do have some worries about you,” Renwick said, adding that he had recently been asked by a “prominent investor” whether “the wheels are coming off”.

The electricity crisis is doing little for investor perceptions of South Africa, Renwick said; the “simple but crucial test” of a country is whether the lights come on when you need them.

Rupert sounded concerns about freedom of speech, describing it as “totally under attack”. By way of example he cited Nelson Mandela’s personal assistant. “Zelda la Grange is not a racist,” he said. “She may have made a faux pas, but she is not a racist.”

His biggest concern, he said, was the “focus on who said something instead of what they said”, joking that the headlines dealing with his remarks at the event would inevitably highlight his billionaire status.

Rupert said that what gave him hope for South Africa was the idea that “the next generation doesn’t have the hang-ups and built-in prejudice” that former generations do – though if Motlanthe’s foray into social media is anything to go by, there may be some uncertainty there. DM