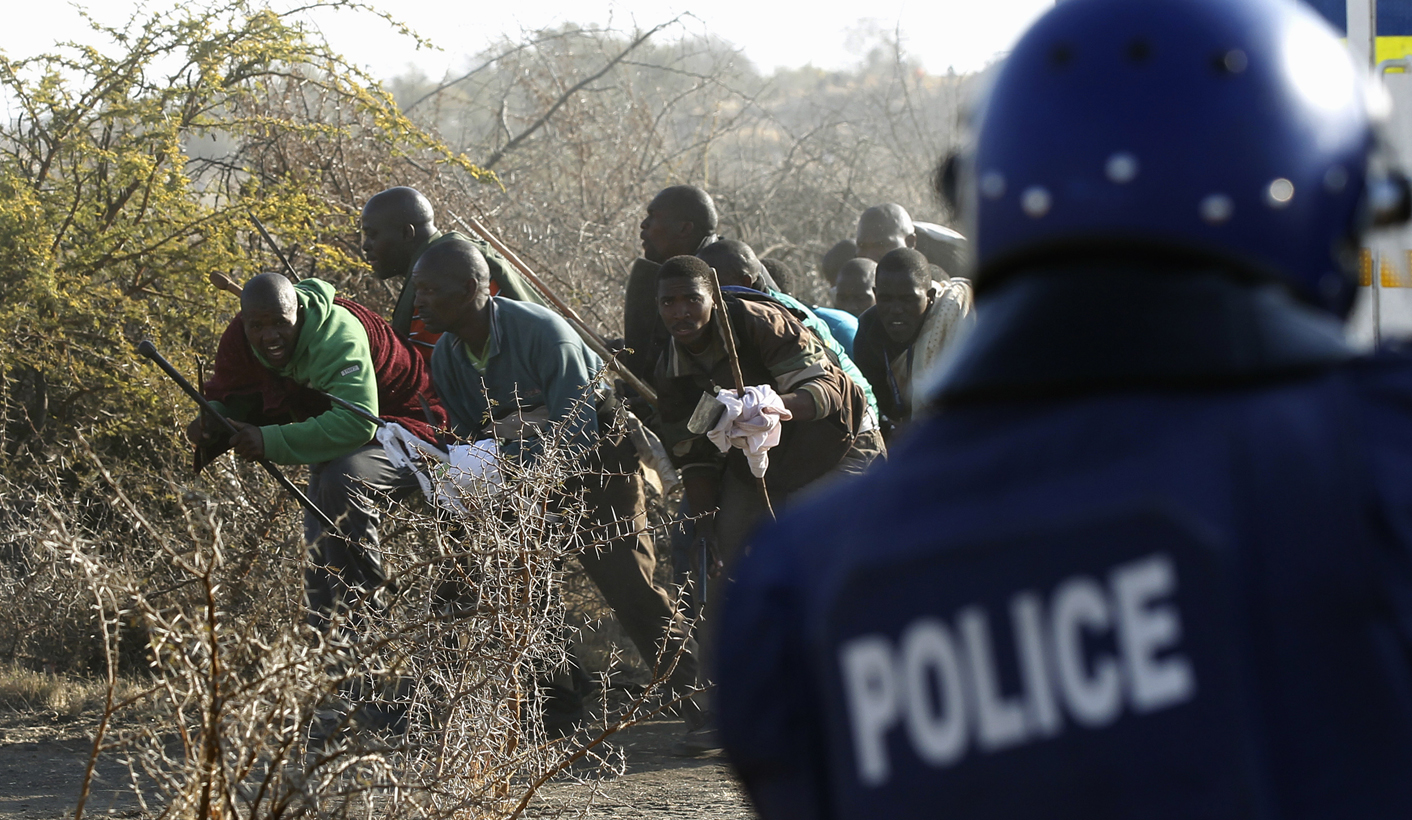 Late last week, the SAPS expert on policing blew away the police and state’s narrative on Marikana, even going as far as to say that the massacre was an executive decision imposed on the police. By GREG MARINOVICH and GREG NICOLSON.

“Teargas, stun grenades, water canons and rubber bullets were used to try to stop them from breaching the police line. This did not deter them,” said Advocate Ismael Semenya, presenting the police’s opening statement on the third day of Commission.

Throughout the Marikana Commission, the SAPS has maintained it was committed to a peaceful resolution and at Scene One, where TV cameras captured officers gunning down protesters. They say they used non-lethal weapons in their campaign to disperse, disarm and arrest people before miners, intent on a bloodbath, breached the lines of defence and posed an imminent risk to life. According to evidence, police used 533 non-lethal means before the Tactical Response Team fired 284 rounds of live ammunition at Scene One.

New video evidence presented by the SA Human Rights Commission (SAHRC) to SAPS expert witness Cees de Rover has blown away the cobwebs of deceit, however. The last few days at the Commission have seen a slew of police experts. First up was the SAHRC’s Gary White, then Eddie Hendrickx for many of the deceased, and finally De Rover, who has been studying the evidence for the police.

De Rover is a former Dutch police officer, who for over 20 years has worked as a police expert for organisations such as the International Committee for the Red Cross and the United Nations. He has assisted police forces in more than 60 countries across Africa, Asia, South America and Europe. In his original statement, he said police could not have foreseen nor acted differently to the risks at scene one. But presented with the new evidence, he agreed with much of the analysis from White, an Irish policing expert who has done the most comprehensive analysis of what happened at Marikana.

De Rover even went so far as to state that the decision to go “tactical” on 16 August, when after two days of relative calm police decided to confront the miners, must have come from the executive, or at the least the executive must have been consulted.

On Thursday, Advocate Michelle Le Roux for the SAHRC presented five damning videos for the police case. Her team had TiNT Post, a video production company, compile all available footage and still imagery from media, police and Lonmin to create a detailed timeline of events. Once all the bits of the puzzle were assembled, the visuals showed multiple angles of the moments leading up to 15:53:50, when Tactical Response Team (TRT) members began firing at protesters at Scene One.

First, the videos disproved the SAPS’s claim that the miners were hellbent on violence and that they circumvented the rolls of razor wire and broke through the Public Order Police’s non-lethally-armed line to attack the heavily-armed TRT.

The video timeline shows that before Nyalas rolled out the razor wire, the lead group of protesters (who were said to be the ones intent on killing cops) were already leaving the koppie, at a walking pace. There were minutes where they could have attacked police, but did not. Instead, they moved away from the police towards the shanty town of Nkaneng, until SAPS armoured vehicles cut them off. Still they kept their distance, and with razor wire rolled out near where they had just walked, they slowly followed the open path between the police vehicles and a cattle kraal. In the video, four camera angles show what happened. Rather than attacking the cops, the protesters were herded to the police line. Many of the survivors say it was a deliberate ploy by the police to make them believe they had a clear path back to their shacks – they call it a “trap gap”.

The videos also show that police claims they used lethal force as a last resort are clearly false. There were two water canons on the scene. For most of time, while the protesters walk away from the koppie, videos show the two vehicles sitting idle. Only when the lead group of miners have already been guided towards the TRT line are the water canons used, within the 10 seconds before the cops open fire with live ammunition. In fact, the jets of water are shown to be aimed towards the rear of the lead group, pushing them towards the waiting line of Tactical Response cops armed with R5 rifles. Around the same time, stun grenades also go off towards the rear of the protesters. In effect, the miners are clearly seen to run away from these non-lethal attacks towards the TRT.

The SAHRC’s final video looks at the shots fired at Scene One. While the miners are slowly walking between the police line and the kraal, after the cops fire rubber bullets, at the same time a stun grenade goes off, one protester fires one shot of a pistol, hitting the ground near a police Nyala. The videos do not support the SAPS claim that multiple gunshots were fired at the police at scene one. What they show is that the TRT did not fire warning shots into the ground before shooting the miners. Though some of the bullets do strike the ground, they hit the dust at the same time that other bullets are slamming into the miners.

Watch: Video analysis used as evidence at the Marikana Commission of Inquiry, presented 4 September 2014 by the South African Human Rights Commission showing in detail the shots fired at Scene One on 16 August 2012.

Many were killed with headshots. Strikers who had stopped in the face of the volley of police fire and adopted defensive stances were still shot at. Many of the sixty or so TRT members continued to shoot at the miners after 14 calls of “cease fire”.

If the videos are accepted as fact, De Rover admitted much of what he said in defence of the police may have been wrong and he may have received incorrect or confused information from SAPS officials. Representing the police, Advocate Semenya objected to the videos on the grounds that they were not compiled by experts in forensics.

Watch: Video analysis used as evidence at the Marikana Commission of Inquiry, presented 4 September 2014 by the South African Human Rights Commission, of the use of water canons at Scene One on 16 August 2012.

Presented with such evidence, De Rover said responsibility had to go beyond the police. Le Roux put 10 points to him to show police should have been able to anticipate violence. Essentially, the police considered the miners as dangerous, suspected they had weapons and had been using muti, had heard threats and doubted they would surrender their weapons if their demands weren’t met. Commission Chairman Ian Farlam added two more points: the four mortuary vans requested and the extra 4,000 rounds of live ammo ordered.

De Rover said considering these points, the risk to life and economic impact involved, from all his experience with policing around the world, it would be difficult to accept there was no political influence in the decision for the police to go tactical on 16 August. That’s how modern democracies work, he was adamant. “I would be very surprised that [the] SAPS would have been permitted to make that decision on its own and not guided, or would not have actively sought the guidance of the executive on this prior to doing it, definitely, when faced with the 12 elements that you have presented. That’s my problem,” he said on Friday.

De Rover said he asked the SAPS if there was political involvement. “My questions have been straightforward on the issue; the answers have not been.” He said North West Deputy Police Commissioner William Mpembe and Major General Charl Annandale, both involved in Marikana, shared his views but didn’t know the level of political influence involved. He asked National Commissioner Riah Phiyega but received an evasive answer.

The police case has been about deflecting responsibility: to the striking mineworkers, to Lonmin, and to the unions involved. However, given the evidence presented last week, the SAPS not only failed to prevent loss of life and avoid using force, but their actions directly led to the deaths of 16 people at Scene One. At scene two, where 18 people were killed, police are accused of tampering with evidence to hide the murder of surrendering protesters, among others killed there.

Responsibility doesn’t stop there. As Farlam wondered aloud last week, why did the police move to its tactical phase on Thursday? The plan – so poorly designed and communicated it’s a compliment to call it a “plan” – was designed to be implemented early in the morning. Why were they so bent on shutting it down then and there? Despite their involvement, Cyril Ramaphosa, Nathi Mthethwa, Susan Shabangu, Riah Phiyega and Zukiswa Mbombo have denied there was any political pressure.

De Rover, however, wasn’t convinced: “If it’s an incident that puts at risk the interests of a big international enterprise, that obviously is of economic importance to the South African Police. If it puts at risk lives and communities, and if it occasions now with regularity death and injury, I can’t imagine that just to be policing questions, and that directions and choices that are made are not subject to political scrutiny or political advice.” DM

Photo: A policeman (R) fires at protesting miners outside a South African mine in Rustenburg, 100 km (62 miles) northwest of Johannesburg, August 16, 2012.  REUTERS/Siphiwe Sibeko

Universal basic income – an idea whose time has come

A call to action: Medical students volunteer to step out of the the classroom into the Coronavirus pandemic

Health facilities avoided out of fear, another mine temporarily closed and a rating agency’s grim forecast

Nomfundo Xolo for Spotlight
Save 6 mins